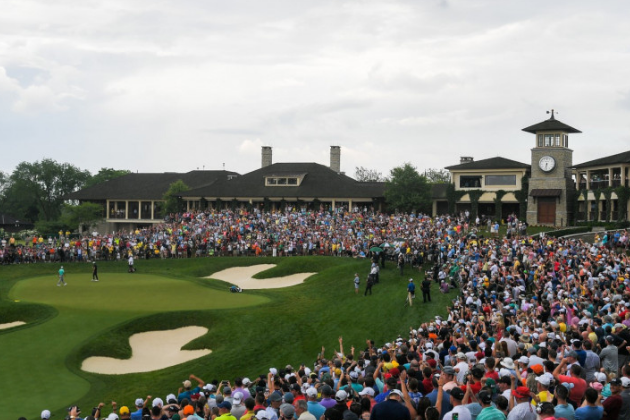 Dublin, OH  — Billy Horschel has won the 2022 Memorial Tournament.  With very difficult conditions on Sunday, Horschel held onto his 54-hole lead for his 7th career PGA Tour win.  With this victory, he earns the  $2.16 million-dollar first-place prize.

Horschel really won the tournament Saturday with a bogey-free 65.  His play cooled off on Sunday though as he carded two bogeys through 13 holes.  His fortunes changed on 15 though, when he drained an absolutely massive 54-foot-putt for eagle.  That putt sealed his Memorial win.  He would ultimately shoot a score of 72, and 13-under for the tournament.

With Horschel leading so dramatically for most of the day, there weren’t many who had a shot to win on the final day of the competition.  However, several players did have some success on Sunday, including Aaron Wise who finished at 9-under for the day, second overall.

Other notables included the duo of Joaquin Niemann and Patrick Cantlay who both finished tied for third, at 7-under par.  Just behind them was a gaggle of players tied for fifth place with a score of 6-under par that included Max Homa, Daniel Berger, and Will Zalatoris among others.

This is the first stroke-play event win for Horschel since 2017.  And with that win, it means he’s fully exempt through the 2024-25 season.  This win also earns him the right to play in the Sentry Tournament of Champions and the 2023 Masters.

The PGA Tour’s next stop goes North of the border to Canada for the RBC Canadian Open.  There, in Toronto, will be the first time the event is played in over a year.  That’s because the last two years it was canceled due to logistical issues surrounding the COVID-19 pandemic.  Rory McIlroy will be defending his 2019 title there.

Billy Horschel’s What’s In The Bag: