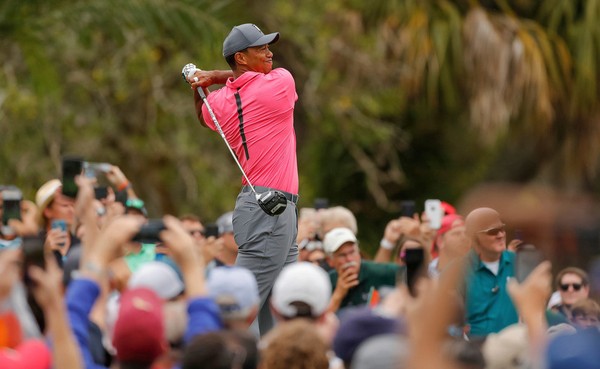 Palm Harbor, Fla. – Tiger Woods is back. Even though he came up just short in the final round, the big story of the Valspar Championship was undoubtedly his excellent all-around play. Heading into the weekend tied for second at -4, Tiger put on a show during his round of 67 on Saturday, holing long putts, chipping in, and landing iron shots close to the hole. With every facet of his game working, he found himself 1 back of 54 hole leader and PGA Tour rookie Corey Conners on Sunday morning.

Though Conners would bogey his first two holes and quickly fade away from the top of the leaderboard, Woods would hang around. He played steady golf during his round of 70 but his iron play did not produce enough legitimate birdie attempts to take over the lead. Also in the mix on Sunday were Justin Rose, Patrick Reed, and Sergio Garcia.

While Tiger created most of the headlines and drew record-breaking crowds to the event, Paul Casey was the man hoisting the trophy on Sunday afternoon. He needed only 21 putts (the fewest of his career) to fire a final round 65. After beginning the day 5 shots back, Casey put together a near-flawless round and got into the clubhouse early at -10. Once there, he watched as player after player fell away from the top of the leaderboard and failed to match his score. It was his first PGA Tour win in nine years and second overall PGA Tour victory for the 40 year old Englishman (he has won 13 times on the European Tour).

The Copperhead Course at Innisbrook held up to its reputation as one of the tougher courses on tour and anything under par proved to be a quality score all week. The golf course was tough but fair, rewarding quality shots and punishing mistakes.

Notably, Masters favorites Jordan Spieth and Rory McIlroy both continued to struggle, missing the cut and shooting +5. Spieth looks to be lacking confidence as his putting continues to be remarkably un-Spieth-like. He ranked near the bottom in just about every statistical putting category and, at 24, has now missed more cuts than Tiger Woods who went from 1998-2005 with no missed cuts. Meanwhile, McIlroy’s swing is as majestic as ever, but he can’t seem to string good shots together. We’ll be watching and hoping these two thoroughbreds can get their game together in time to put their names in the conversation for the green jacket.

With the intention of getting more competitive reps before Augusta, this was Tiger Woods’ first career appearance at the Valspar Championship. Next week, he will play the Arnold Palmer Invitational at Bay Hill, a tournament he has previously won eight times. Also in the field next week are Jason Day, Rickie Fowler, and Hideki Matsuyama.