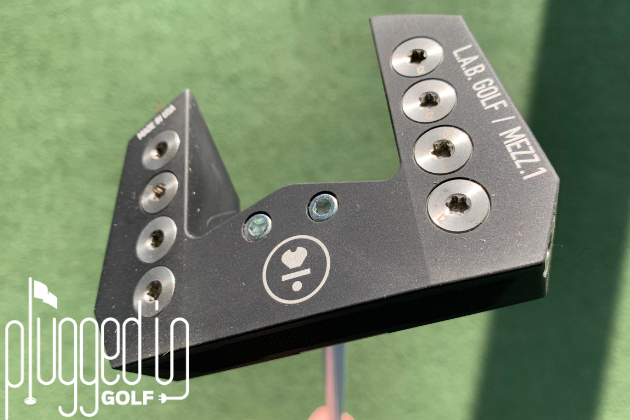 The L.A.B. Golf MEZZ.1 putter continues to use radical technology but in a smaller, more attractive package.  Those who had been unwilling to give L.A.B. a go before now will want to take a second look. 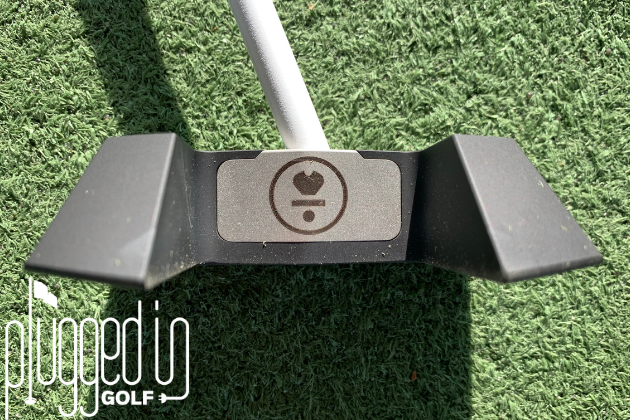 L.A.B. Golf has knows that their putters look strange… very strange, if not outright ugly.  They’ve used that exact phrasing in their marketing.  While their blade models, first the BLaD.1 (review HERE) and then the B.2, have looked sleek and minimalistic, they almost look unfinished.  The Directed Force 2.1 (review HERE) on the other hand, looks like a cross between a cattle brand and a UFO.  It’s large, loud, and gaudy.

The new MEZZ.1 seeks to change all that, putting a L.A.B. spin on the iconic fang-style putter.  It’s a shape that has seen tons of success throughout the years starting with the Odyssey #7 (review HERE) but L.A.B.’s model is approaching the familiar shape in a fresh way. 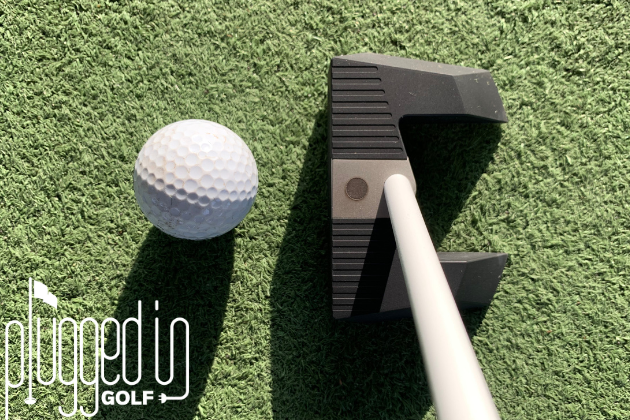 Let me just say that the L.A.B. Golf MEZZ.1 looks better than I thought a L.A.B. putter could look.  It’s a mid-mallet – a sleek, small, black, fang-style putter.  It’s center-shafted with a white ACCRA X L.A.B. golf shaft.  The MEZZ.1 gives the impression of being a positively deadly putting package.

The fangs aren’t particularly long, and while the shape still won’t win over traditionalists, I loved the futuristic, almost alien-looking design.  Flipping over the putter, it features eight weights on the bottom with another two on the sides of the clubhead. 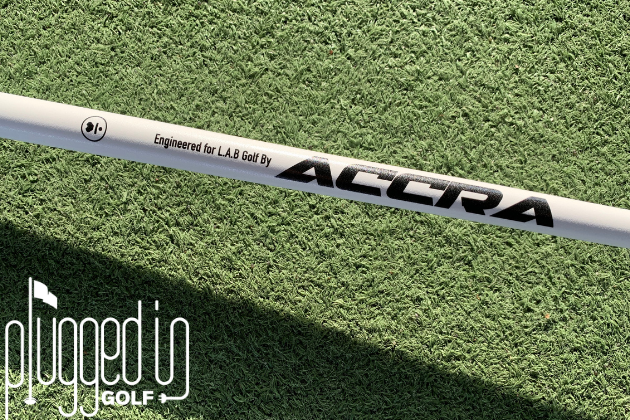 While my putter has a sight dot, L.A.B. gives you the ability to customize this putter with a sight line or leave it naked.  There are also further customization options with different grips, as well as upgrades available to other shafts including BGT Stability Tour Black [review HERE], BGT Stability Tour 2 Polar, and the LAGP 135 [review HERE].

Finally, I really like the L.A.B. Golf logo on the back of the mallet.  It looks quite classy without any text. 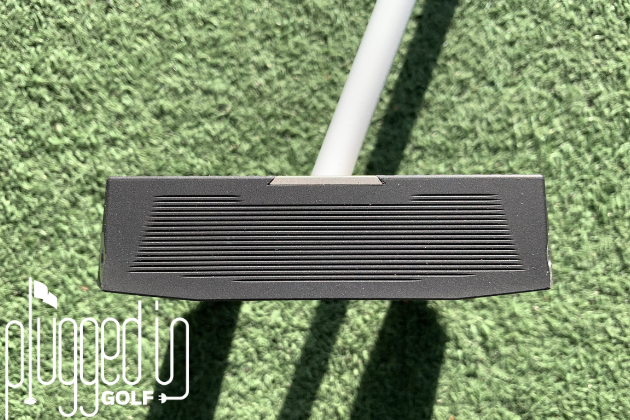 Sound and feel are always important, but even more so when it comes to finding a putter.  That’s why it’s exciting to see L.A.B utilize a fully CNC milled billet of 6061 aircraft aluminum on the outside, and a 303 stainless steel midsection.  That combination of materials equates to a fantastic feel, noticeably better than the other putters L.A.B. has released.  It is a delicate combination of softness with a satisfying jolt off the face.

While the Directed Force 2.1 model produced a higher-pitched, hollow, tinny sound, the noise off of the MEZZ.1 has a more muted, solid sound similar to the B.2 model.  However, it does retain a bit of a vibration, and because of that, it feels like a combination of both of the L.A.B. putters’ feel.  Compared to those other putters, the feel was more responsive, although not drastically more so. 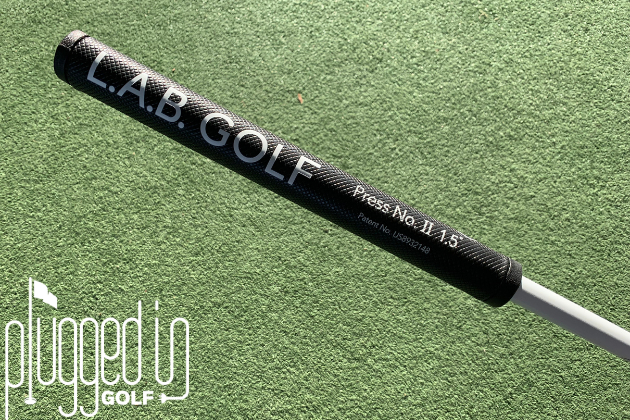 Another part of the feel of the club is in the atypical grip that is placed on it.  It utilizes a proprietary grip called the Press II 1.5, designed to enforce a forward shaft lean.  The grip is smaller than other L.A.B. putter grip models, is a bit tapered, and features a flat top.  While I think the logo could be toned down, the grip felt pleasant, and like the rest of the club, definitely contributed to making similar strokes from putt to putt. 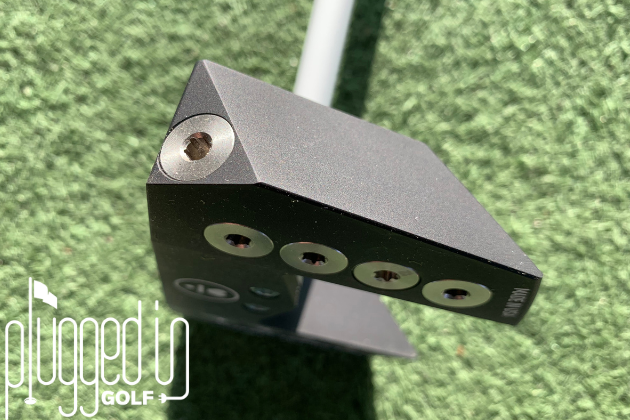 L.A.B. Golf has always had one central idea for their putters, and that’s the idea of lie angle balance (that’s where the name L.A.B. comes from).  Lie angle balance defined by the company is the putter’s ability to stay square to the path during the putting stroke without any adjustment from your hands.  This goes beyond what many of us know as the standard face-balanced style of putters.  This putter, like the other L.A.B. Golf models, removes torque, or the putter head’s tendency to twist, from the equation.  That leads to a more consistent, repeatable stroke.  To see the process in action, I’d recommend checking out this video on their website HERE. 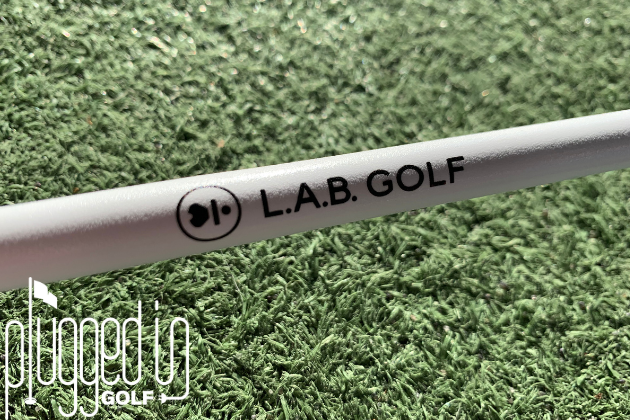 My experience with this putter was phenomenal.  Through their ability to fit me online, they were able to recommend the best combination of length and lie angle to get me swinging optimally, with no discernable twisting in the clubhead.  The alignment dot paired nicely with the center shaft to provide a clear view down to the ball.  Moreover, the bit of white between the black fangs helped to shape the ball as a further alignment aid.  As a result, I found that it was easy to align and make consistent strokes.

Most important, the MEZZ.1 made putts.  My performance with this putter was solid. Whether from long range or short, it had dependable rolls off the face.  Despite having a moderate arc to my stroke, I found that L.A.B. putter’s ability to reduce the twist in the clubface was aiding me, minimizing off-centered strikes, resulting in exceptional distance control.  That translated to more confidence and even more made putts. 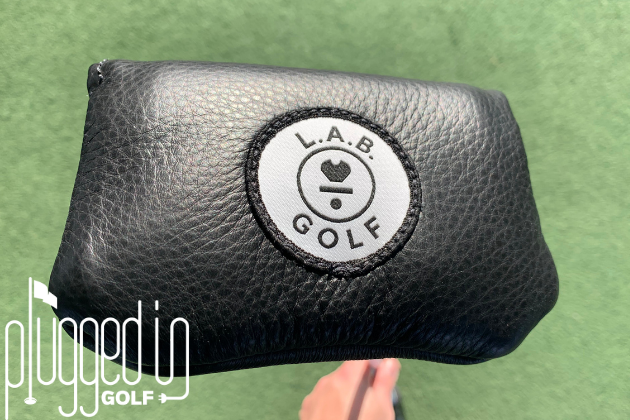 This is unequivocally L.A.B. golf’s best-looking putter.  It’s arguably the best feeling putter they’ve produced too.  Consistent feel and consistent roll instill a great sense of confidence which leads to accuracy on the greens.  While it started as only a prototype, the MEZZ.1 was so successful that it has entered into the standard product line for the company.  With this putter, L.A.B. Golf continues to prove that they can innovate in the short game.