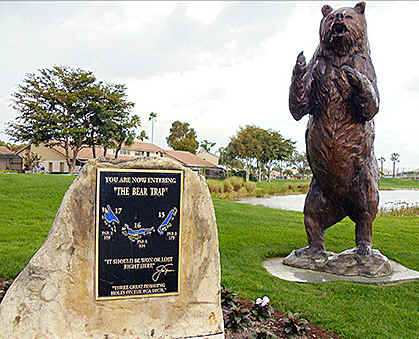 The Year of the Playoff Continues on the PGA Tour

Palm Beach Gardens, FL – The PGA Tour began its Florida swing at PGA National with Justin Thomas notching his 8th victory on tour. The George and Tom Fazio-designed track received the Nicklaus treatment in 1990 and is known as one of the most challenging layouts on tour. That reputation held up over the week, with the golf course brutalizing the field over the first two days. “It just feels like you’re getting punched in the face every hole,” said Daniel Berger after he and Justin Thomas shot a pair of respectable 72s playing together on Friday. Heading into the weekend, leaders Luke List and Jamie Lovemark sat tied at -3.

The field was stacked with major winners like Adam Scott, Padraig Harrington, and Rory McIlroy, and also featured some of Europe’s top players like Alex Noren, Tommy Fleetwood, and Thomas Pieters as they prepared for next week’s WGC event in Mexico. Tiger Woods made his second straight start and played some high quality golf after his disappointing MC at Riviera. He finished solo 12th at even par and produced some impressive stats, ranking second in driving distance and first in proximity to the hole. At one point Tiger was 3-under on the final day, but dropped back to even after he made double bogey on 15 after his tee shot found the water and followed it up with a bogey on the 16th.

Jack Nicklaus has said that The Bear Trap is where this tournament should be won or lost and with multiple players stacked up at the top of the leader board heading into the final stretch, that’s exactly what happened. With Alex Noren in the clubhouse at -7, the final pairing of Justin Thomas and Luke List stood on the 18th tee tied with Noren for the lead after both getting up and down on the par 3 17th. With List was on the green with a chance for eagle, Thomas nearly jarred a wedge after laying up from the rough. Both would tap in for birdie and go back to the 18th tee for a playoff tied at -8.

All week, the greens were firm and fast, the fairways were tight, and the water was seemingly everywhere. Players had to find the fairway in order to have any chance of keeping their ball on the greens and a delicate short game was necessary to keep pace with the field. With Thomas on the green in two on the par 5 18th, List had a tricky lie in the rough and hit his second shot up against the stands left of the fairway. After taking a free drop, he hit a quality wedge shot but could not make the ensuing putt for birdie. After lagging it close, Thomas was able to secure his 8th win as daylight faded.

To List’s credit, he showed himself to be more than one of the tour’s big hitters. After dropping two shots in his first 4 holes today, he fought back admirably and showed that he has the quality to contend on tour week after week. With the win, Thomas moved to first in the FedEx Cup points list and third in the world. It was his 8th win in his last 32 starts. With the Masters in sight, Thomas has once again proven that he is a threat to win every week he tees it up.