Hamilton, Ont. – On the heels of the U.S. Open, one of golf’s most prolific players in Rory McIlroy captures the 2019 RBC Canadian Open in dominant form.  Rory put on a flawless performance on Sunday at Hamilton Golf & Country Club by blitzing the field and birdieing four of his final 8 holes in addition to an eagle on 17 to win by 7 strokes.  No, thats not a typo – a seven-stroke victory.

For Rory McIlroy, his week started slow.  An opening round of 67 barely cracked the top-25.  His play and scores got better with each round, however, as he carded a 66 on Friday and a 64 Saturday.  His Saturday performance was a perfect bogey-free round as it boosted him to a 3-way tie for the lead going into Sunday.

Rory then turned otherworldly.  On Sunday afternoon, he birdied 5 of his first 7 holes to take a commanding lead.  His driver seemingly split every fairway and his approaches were kick-in birdies.  McIlroy birdied 11-14 before bogeying the par-3 16th hole.  Just when you thought he might be stumbling, he eagled the very next hole to all but cement his name on the trophy before even playing 18.

Rory has now won the national championships of the U.S., Britain, and Canada, which has only been done by 6 other players in history.  Tiger Woods and Lee Trevino were the only ones to do them all in the same season. 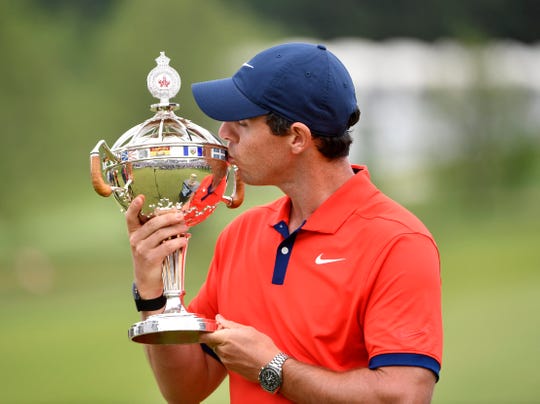 With the U.S. Open only a week away, the RBC saw a strong field in preparation for Pebble Beach.  2017 PGA Champion Justin Thomas and 2016 U.S. Open Champion Dustin Johnson both made the trip to Canada but finished tied for 20th and 15 strokes back of the leader.  2011 PGA Championship winner Keegan Bradley had the low opening round but failed to break 70 over the weekend.  Top U.S. Open favorite Brooks Koepka failed to break par 3 out of his 4 rounds after barely making the cut.

The RBC Canadian Open is hosted by Hamilton Golf & Country Club in Hamilton, Ontario and is the oldest continuously running non-major PGA Tournament.  It is also famously known as the most prestigious tournament that was never won by Jack Nicklaus.  Jack finished 2nd here seven times.  The PGA Tour heads to the west coast next week for the 2019 U.S. Open at Pebble Beach where Brooks Koepka is the defending champion.