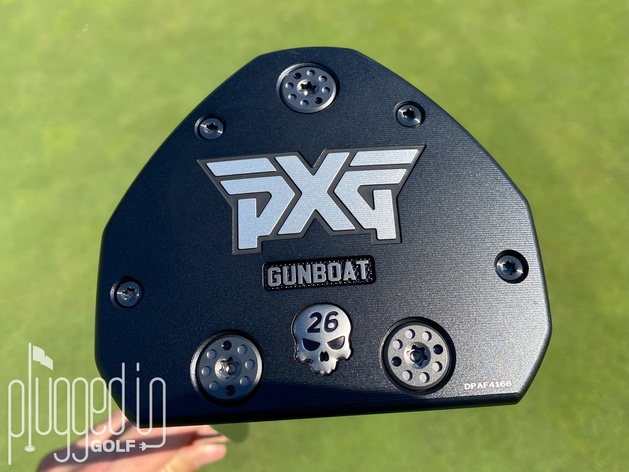 With the Battle Ready series, PXG has made a line of putters that look as aggressive as their marketing sounds.  But with the Gunboat, PXG has also put their money where their advertising is by making a model that redefines the words “stable” and “forgiving”. 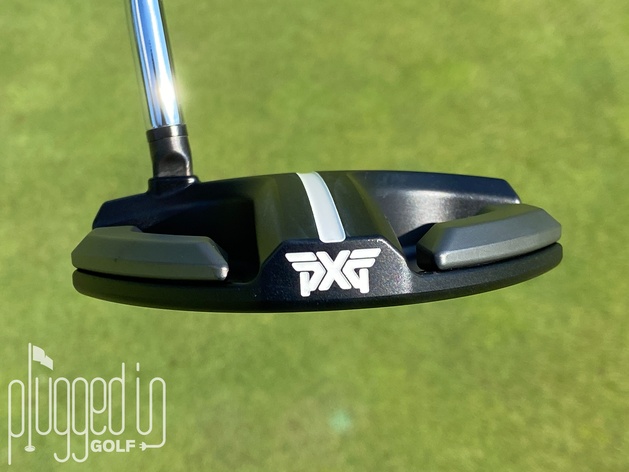 Starting with the release of their first putter in the “Battle Ready” series (the Blackjack, review HERE) back in October 2020, PXG has been steadily adding a full suite of options — nine putters in total: four blades and five mallets.  This new Battle Ready Gunboat is a new version of the Gen 2 Gunboat that features several updates, upgrades, and refinements. 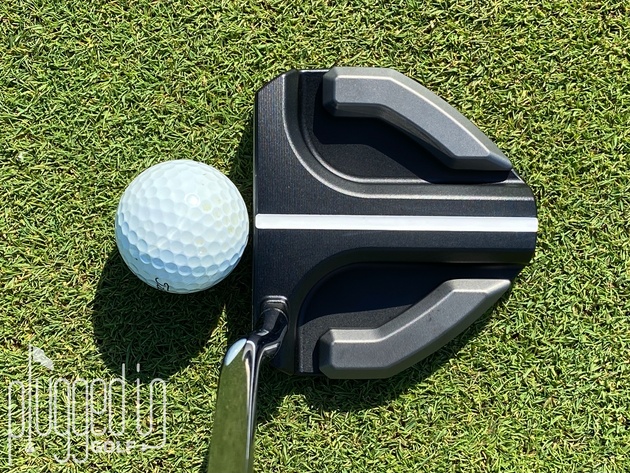 The Battle Ready line of PXG putters may be named after U.S. military vehicles, but you’ll feel more like a secret agent using them.  These are sleek, modern, handsome golf clubs that ooze sex appeal – an embodiment of the phrase “murdered out.”  All black and silver, even if you’re not a fantastic putter, you’ll feel lethal on a putting green with these through their looks alone.

As for the Gunboat model itself, the only color on it is a thick white sightline down the center of its T-shaped mallet design.  The one I tested came with a double bend hosel, but both a plumber’s neck and heel-shafted options are available.  It features a milled face and a body utilizing both aerospace-grade aluminum and tungsten.  As someone who generally prefers sharp lines to curves, I was pleasantly surprised with the visual balance of both features on this putter.

Flipping the club to look at the sole, you will see design features like the PXG logo, a skull design with the number 26 etched into the forehead, and the word “Gunboat” to denote the model of the club.  Of course, it’s not all about aesthetics, and PXG knows that. Also on the sole are three weights that can be changed out to make the head lighter or heavier. 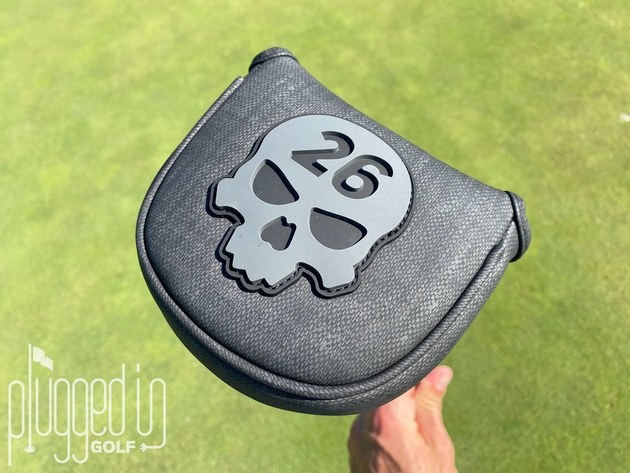 Before moving on, I want to give praise where praise is due. PXG doesn’t make the most expensive putters on the market, but you wouldn’t know that from their headcovers.  While I recently wrote about being disappointed in Scotty Cameron’s headcovers (review HERE), I was blown away by the quality of this PXG headcover.  It’s fantastic. Not only does it look awesome; it has an exceedingly premium feel.  Utilizing thick material and magnets, I am fully confident that the cover won’t fall off and will keep this putter in pristine shape. 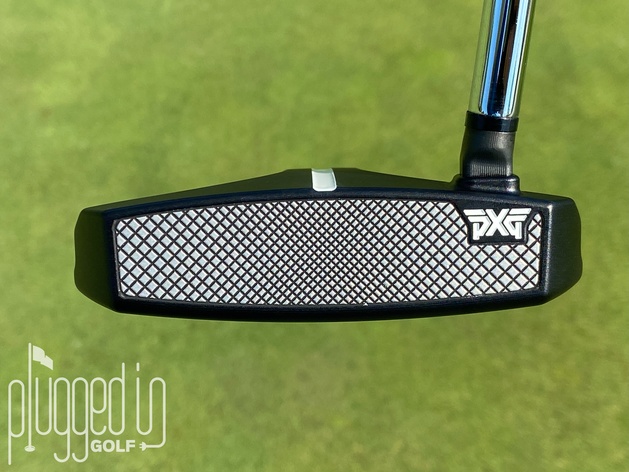 My first thought in picking this putter up was that this was a *very heavy* putter.  When testing it with friends, I just found myself repeating again and again, “This is so heavy.”  That heft was noticeable when striking the ball, and the sound was heavy and dull “thump”.  To put things in perspective, this putter was even heavier than the Cobra’s new flagship model, the giant Agera putter (review HERE).  While the Agera’s standard weight is 385 grams the Gunship is even heavier at its lightest offering, a whopping 395 grams!  At its heaviest (in an armlock style), it can weigh an absolutely colossal 470 grams!

The feeling was great if you don’t want to feel mishits in your hands. Especially because the PXG/Lamkin grip felt pleasant and tacky to the touch.  The milled face and sheer weight of this putter made most strikes feel solid — however, that means that if I did mis-strike the ball, it was hard to pinpoint where on the face I was hitting my putts. 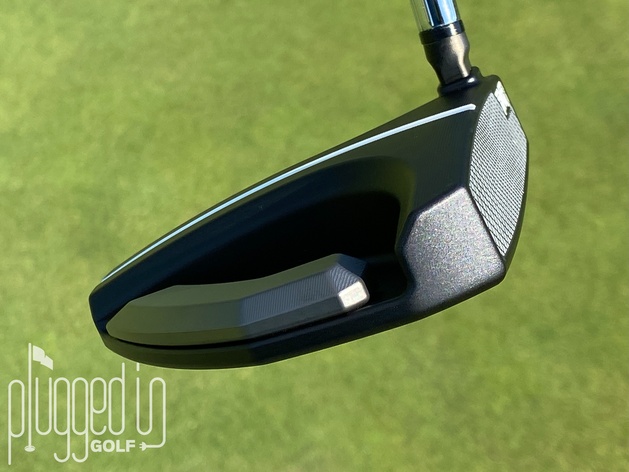 PXG touts the Gunboat as their “most forgiving putter in the Battle Ready Lineup” and also claimed the putter has “game-changing stability” and “exceptional consistency across the face.”  I found this to be largely true and attribute it to the combination of tungsten and an “Optimized Pyramid Face Pattern” in the putter’s face milling.  In using that particular milling, I found speed control easier than normal, even on strikes I purposely mishit to test the club’s forgiveness.  The longer the putt was, the more I noticed that forgiveness came into play.

Matt called another model in this lineup, the One and Done (review HERE), “one of the most stable-feeling putters I’ve ever swung.”  But I dare say that the Gunboat one-ups that.  It’s next-level stable. 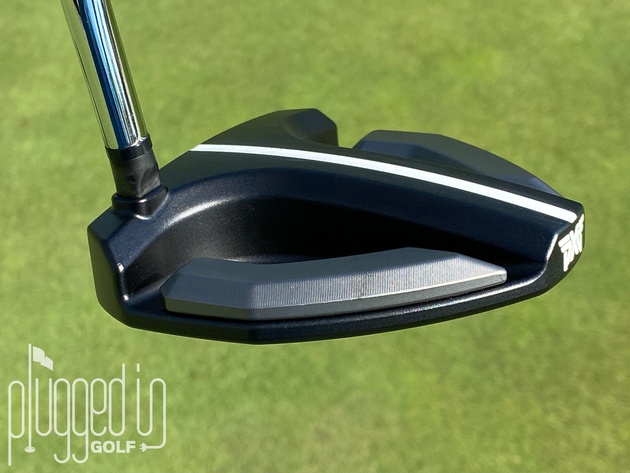 There are other things that contributed to the performance of the putter, too.  Thanks to the thick white line and the overall T-shape of the head, consistently lining putts up was a breeze.  The black color isn’t just an aesthetic choice either as the matte anti-glare finish also helped me focus on sinking putts and not on being distracted by the club, which some putters have been known to do.

It’s also worth noting that you can change that weight if it is too heavy for you (like it was for me).  The putter weight kits are sold separately, but they can drastically change the weight of a club to offer a preferred feel.  In fact, it provides the ability to alter the weight rather significantly one way or the other. 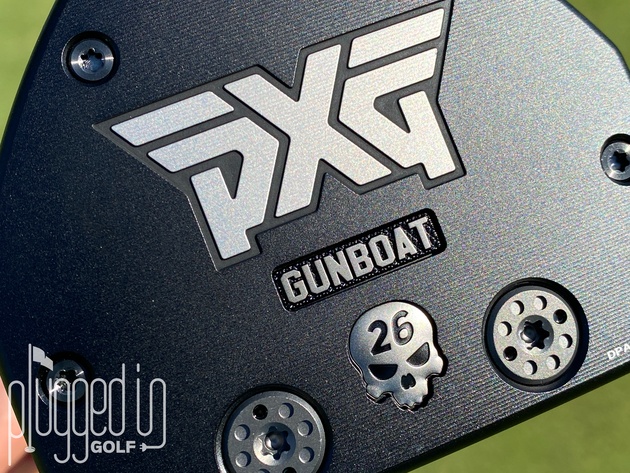 PXG’s marketing is… in your face.  Personally, I am not a huge fan of having a man scream at me through the TV saying that “NOBODY MAKES CLUBS LIKE WE DO.”  That being said, that voiceover may actually be telling the truth.  Their goal with this putter was to make a solid, face-balanced, forgiving putter and they succeeded.  If you need a mallet and don’t mind a large, heavy head, there is no reason not to give this a try.