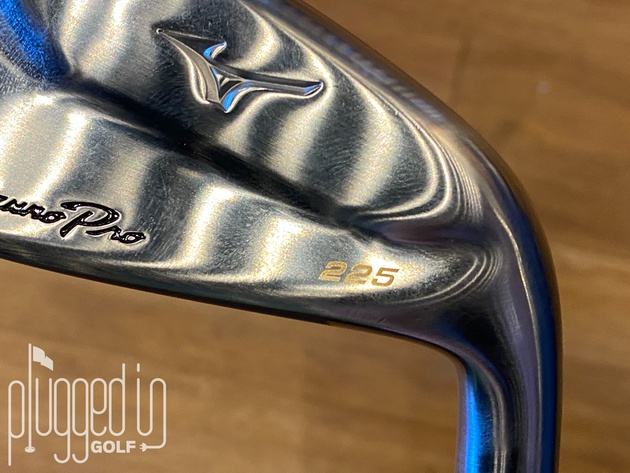 The Mizuno Pro 225 irons are a nice compromise for players who want some distance, some forgiveness, decent looks, and fairly traditional feel. 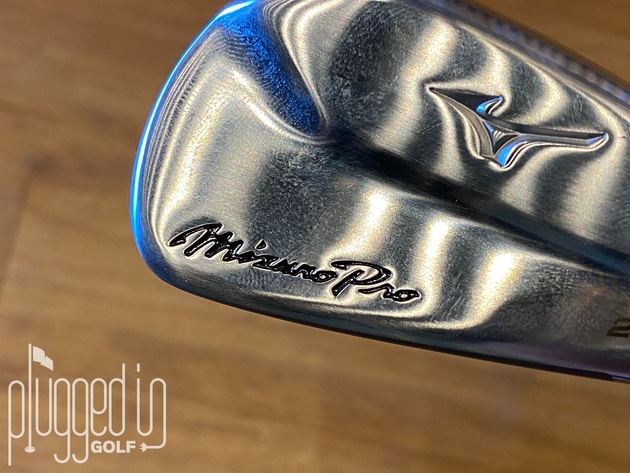 Mizuno fans have had to wait a little longer than expected for the new Mizuno Pro irons (thanks, COVID), but that wait is now over.  After months of staring at pictures on the internet, you can find the Mizuno Pro 225 irons – as well as their smaller brothers, the 221 and 223 [review HERE] – at your local fitters and retailers.  Were they worth the wait?  Let’s discuss. 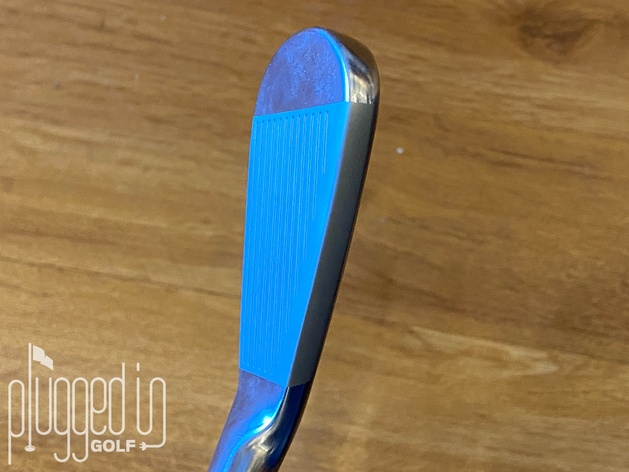 The Mizuno Pro 225 is the successor to the Mizuno MP-20 HMB [review HERE].  Mizuno even refers to them as the second generation of the Hot Metal Blade on their website.  As such, it’s the largest member of the Mizuno Pro family.  The target audience is the mid-handicap player who wants some of the blade look without being punished on mishits.

To my eye, the address look of the Mizuno Pro 225 can all be described as “player-ish game improvement iron.”  The top line is medium thick but very progressive – it gets much thinner as you move into the scoring irons.  There is some offset, but it’s well-shaped.  The substantial rounding of the toe makes the blade look more compact than it is.  Finally, the sole width is average for a GI iron.

The faux blade look of the Mizuno Pro 225 is one of the major selling points.  With minimal branding and an absence of color, it has a premium, players look in the bag. 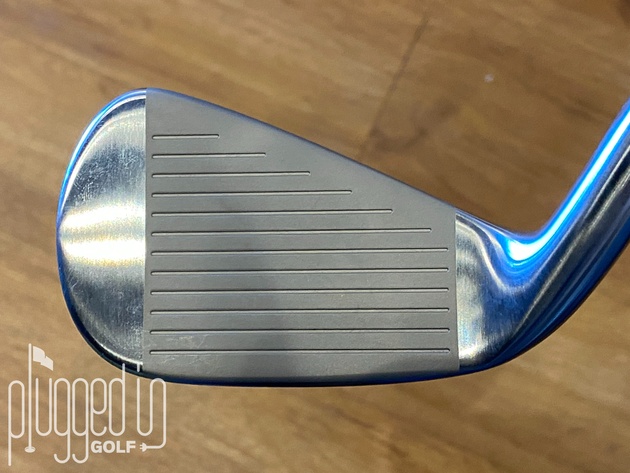 My recollection of the MP-20 HMB was that the feel was unexciting, definitely short of “nothing feels like a Mizuno.”  This set the bar low for the Mizuno Pro 225.  I am pleased to report that this newer version surpassed my expectations.

With regard to feel, the Mizuno Pro 225 is solidly in the middle of the bell curve.  I wouldn’t rate it as being soft, but it’s not firm or clicky either.  It leans more toward solid and satisfying than I’d expect from a hollow iron, so I ultimately rate the feel as a small positive.

The sound of impact is quieter than the previous HMB.  It also provides a clear signal on mishits – they’re duller sounding than pure strikes. 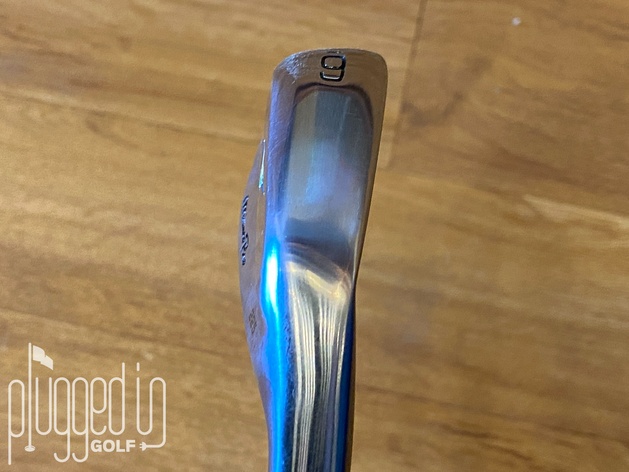 The Mizuno Pro 225 irons set themselves apart from their brothers with an emphasis on distance and forgiveness.  Mizuno uses a very thin face to create some of their highest ball speeds.  The Pro 225 is not among the very fastest irons, but my smash factor pushed into the low 1.4s on good strikes.

Strong ball speed is coupled with fairly low spin to create long carry distances.  For me, the spin is on the low end of playable.  It’s not the lowest spinning iron I’ve tested, but I would strongly recommend a good fitting to ensure that your approaches will be able to hold the green. 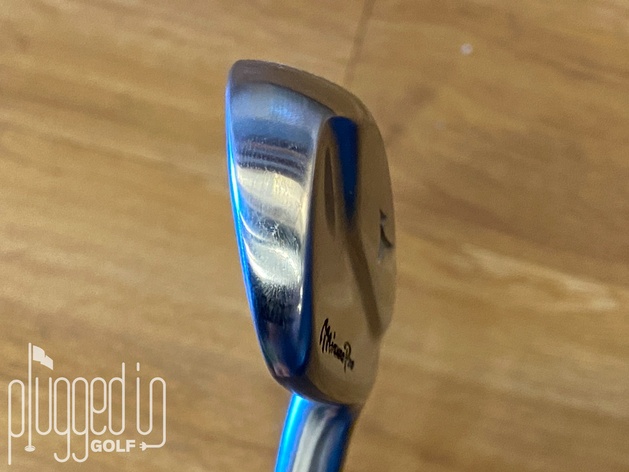 The hollow body construction and tungsten weighting pair to make the Mizuno Pro 225 quite forgiving for its size.  You won’t knock down flag sticks with anything but a pure strike, but launch angle and ball speed are fairly robust on small misses.  As the misses start to get bigger, you’ll see a larger gap between this iron and truly GI and SGI irons.  Players above a low teens handicap should think carefully before bagging these.

As I noted in my review of the Mizuno Pro 221 irons [HERE], players need to be very careful in constructing combo sets with the Mizuno Pro irons.  The three irons in this family are quite different in their construction and loft structure.  This set has the strongest lofts by as much as 4 degrees.  If you decide on a combo set, make sure you work with a skilled fitter to pair these irons correctly. 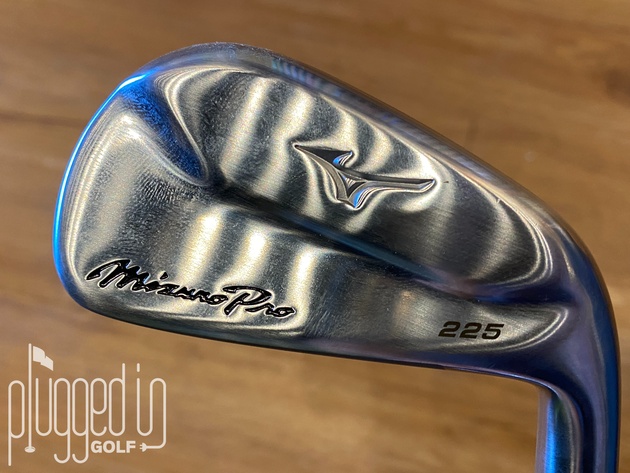 The Mizuno Pro 225 irons are a nice option for golfers who want a players look without giving up all the distance and forgiveness of a modern iron.  These aren’t the longest iron nor are they the most forgiving, but they’re a good compromise for the low-mid handicap player who wants a little of everything. 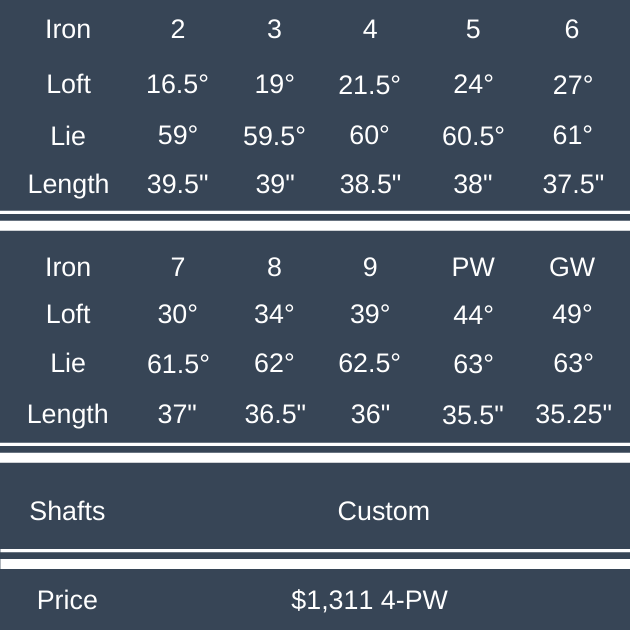