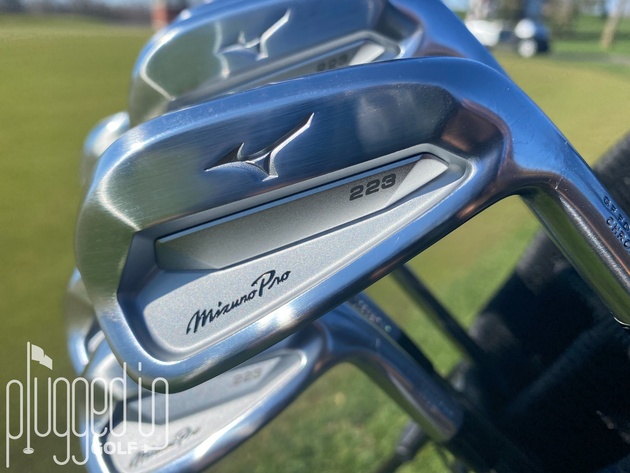 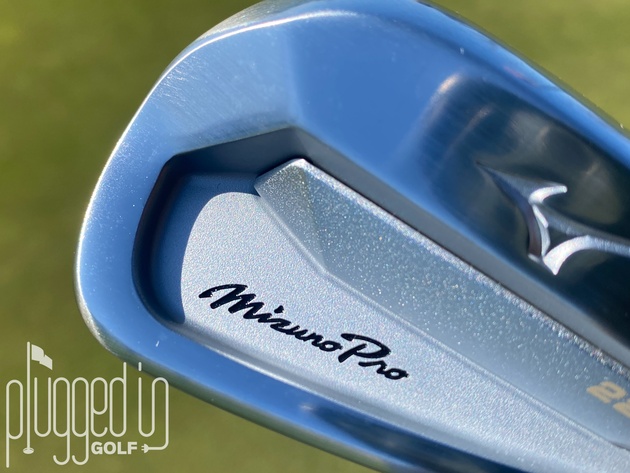 My first set of new irons were Mizuno MX-23s.  As a player just starting to build his skills, they were the perfect set: a little forgiving, a little aspirational.  With the Pro 223, Mizuno has hit a similar sweet spot and created what I think are their best irons in several years. 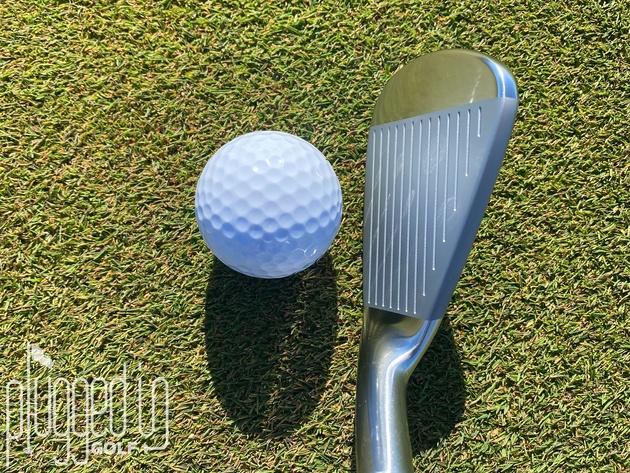 I assumed the Mizuno Pro 223 would just be a compromise between the Pro 221 and Pro 225 [review HERE], but Mizuno went another route.  To start, they gave the Pro 223 the exact same offset specs as the Pro 225.  It’s substantially more offset than the Pro 221 [review HERE], but not so much that it’s distracting.  The sole width of the Pro 223 is also very similar to the Pro 225.  With the Pro 223, you get a slightly shorter blade length, though the difference is never more than 3mm.  What’s most interesting is the top line width.  The Pro 223 has the exact same top line from 4I through PW.  In comparison, this is wider than the Pro 225 in the 9I and PW but slimmer in the long irons. 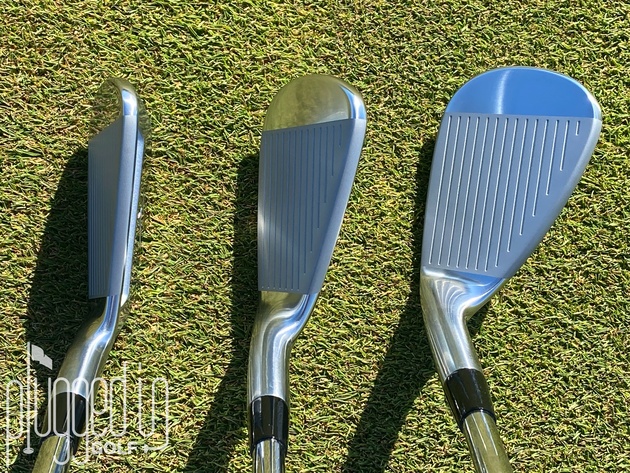 For those who skipped that deep dive, the short version is that the Mizuno Pro 223 is a solid looking players iron. The compact head frames the ball beautifully, and the offset is well-shaped.  Because the top line is the same throughout the set, the long irons look more player-ish than the scoring clubs, but the whole set looks good.

In the bag, I think the Pro 223 looks great.  The cavity is very shallow with some interesting angles.  Mizuno’s running bird logo is left without paint fill to round out a fairly minimalist look. 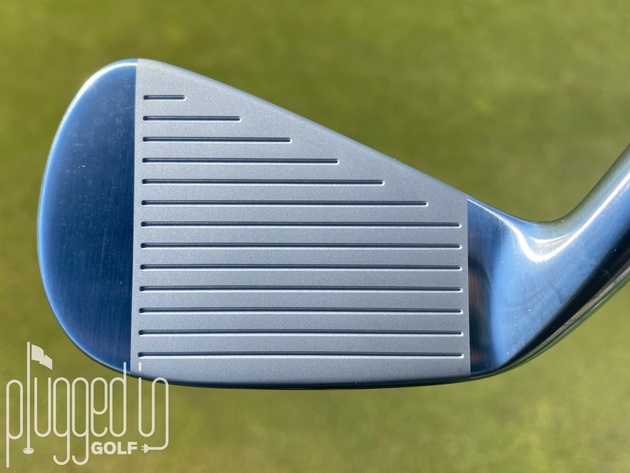 Reading through the tech points on the Mizuno Pro 223, it becomes clear that this is actually two sets in one.  The 4-7 irons are “Forged Chromoly with Flow Microslot” and the 8-PW are “1025E Pure Select Mild Carbon Steel.”  Throughout the set, there’s a “microlayer” of copper under the nickel chrome plating.

I was concerned that the different constructions and materials would create a set without cohesive feel, but that concern proved to be unwarranted.  From the 4I to the PW, the Pro 223 has a crisp, solid feel.  When you strike a ball absolutely perfectly, you get the legendary Mizuno softness, too.

As you would expect from a forged players iron, the feedback is precise.  Your hands will tell you exactly where the ball met the face.  As shots get further from the center, the feel loses its sweetness in tiny increments. 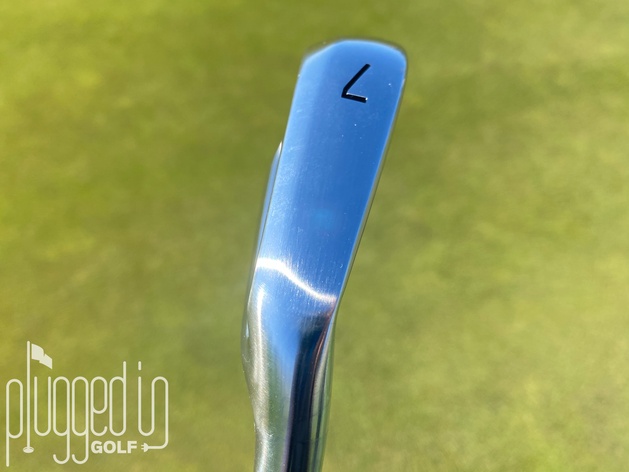 The primary reason that I think so highly of the Mizuno Pro 223 is the way that it balances performance and forgiveness, distance and scoring.  In the current iron market, anything other than true blades needs stronger lofts and enhanced ball speed to compete in fittings.  The Pro 223 keeps its lofts closer to traditional specs but still offers plenty of ball speed and distance.  By maintaining “weaker” lofts, the Pro 223 retains enough spin to allow players to shape shots, manipulate trajectory, and stop their approaches next to the flag.  As a low spin player, I was longer with the 223 than the 225 because of the higher spin. 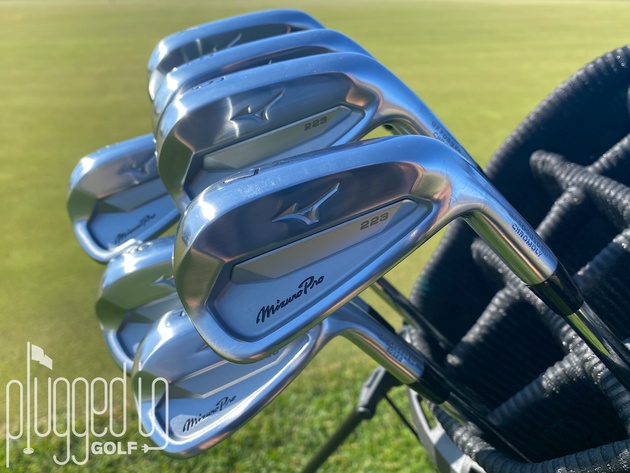 Because of the difference in construction, one of the things I tested extensively was the gapping between the 7 and 8 irons.  I was impressed to find the same distance gap that exists between the other clubs in the set.  Not only was the distance precisely gapped, the ball speed, spin, and launch were, too, so that ball flight remained consistent.

In terms of forgiveness, the Mizuno Pro 223 has enough for the aspiring player to get through their off days.  This is not an SGI iron by any means – it’s not built for players who use the entire face.  However, it’s happy to take modest misses and place them on the green.  You will see ball flight differences on thin strikes, but those shots will carry nearly-full distance. 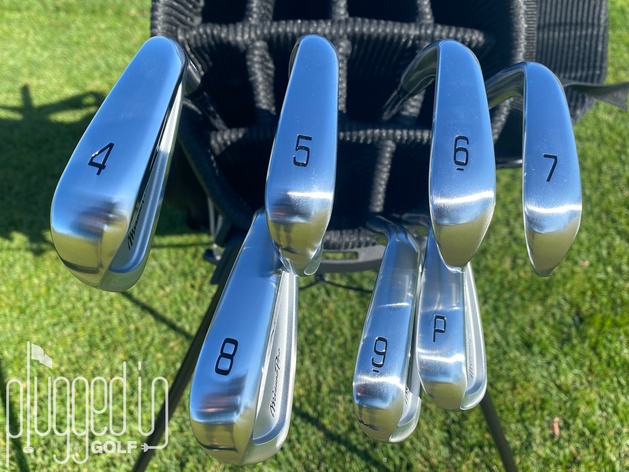 Finally, Mizuno uses heavy beveling of the back edge of the sole in the Pro 223.  This is to accommodate the construction while providing an “authentic tour accepted sole.”  It’s another example of Mizuno striking an ideal balance between the needs and wants of different players.  The turf interaction of the Pro 223 is excellent.  It doesn’t dig but it doesn’t feel like landing a 747 either.  This sole plays thinner than it looks. 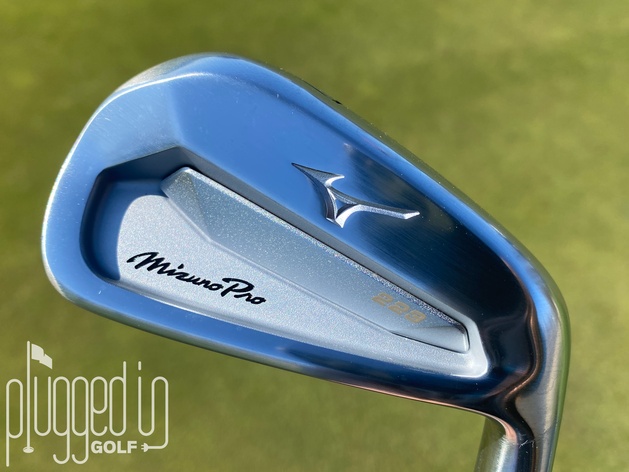 It’s often said that a good compromise makes everyone unhappy.  The Mizuno Pro 223 irons turn that on its head.  Tour players and 10 handicaps alike can game this set.  Whether you’re an elite ball striker looking for a little extra forgiveness or an aspiring player ready to move to players clubs, this set deserves your attention. 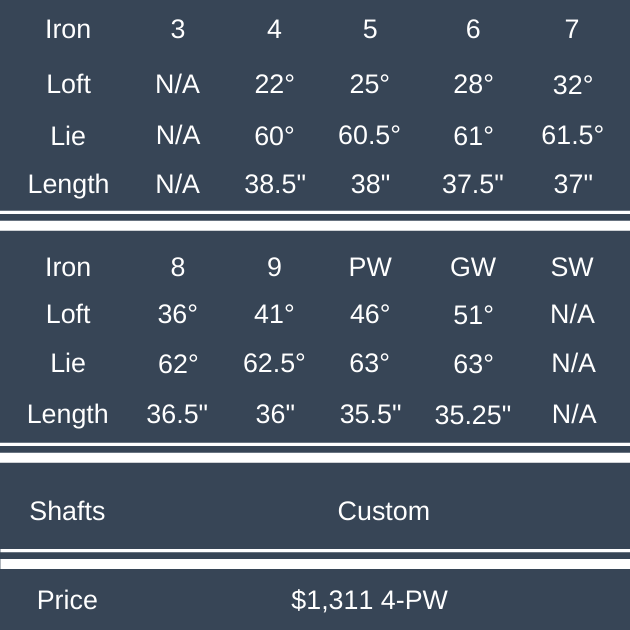