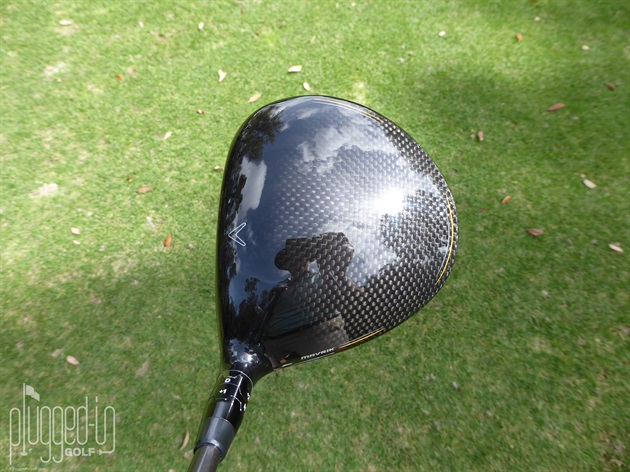 As I walked onto the driving range, the MAVRIK driver headcover served as a beacon and proved that, at a minimum, the Callaway marketing hype was effective.  I ended up being the fourth person to hit the driver and the wait was a good chance to watch ball flights and listen to the reactions from my golf friends.  With “whoa” and “hot” being common proclamations, expectations were fairly high when I was finally able to make my own swings – and I wasn’t disappointed. 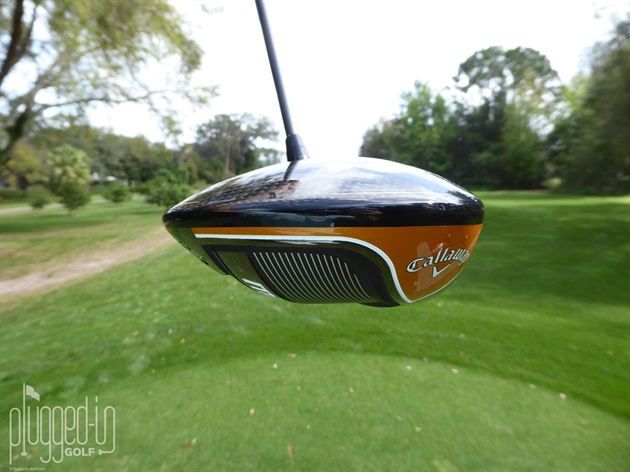 Although I’m not a big fan of the shiny orange segment on the headcover, I do like the deep metallic orange color on the head of the MAVRIK.  The matching pinstripe color on the trailing edge of the crown and outline of “Riptide” on the shaft make the club look cohesive.  Callaway also offers over 1,400 color combinations for a true custom club. 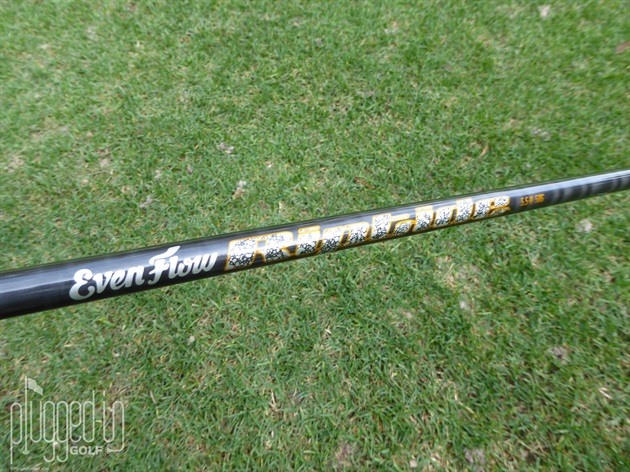 Face on, the standard MAVRIK has a tall, rounded presence that to me is quintessential Callaway.  Looking from behind, the head is symmetrical with an aerodynamic shape.  The high gloss coating on the composite crown looks stunning, but the reflectiveness can be a bit distracting depending on the sun location.  Wonderful shaping overall. 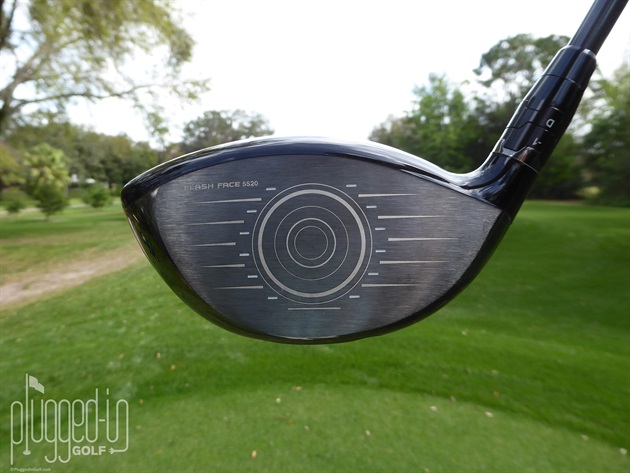 In similar fashion to what Matt S. noted with the Sub Zero model [LINK] and Dylan on the MAX [LINK], the standard MAVRIK has a very pleasing sound.  Mid volume, the resultant “thwack” resonated between a metallic and woodsy tone with a pleasant baritone pitch.

When I asked for clarity on “hot” as noted in the intro, the golfers all reported the face feeling springy and that the ball felt like it was being shot off the face.  For me, that feeling was exemplified hitting urethane cover balls.  Although there wasn’t much feedback on strike location, the feel is very satisfying.

Looking over the launch monitor data collected at Club Champion, two performance results of the MAVRIK stood out – great ball speed and consistency.  Both of these can be attributed to some degree to the technologies of Flash Face SS20 and Jailbreak.  Neither design feature is completely new, but the longevity of the concepts is a testament to their impact on performance. 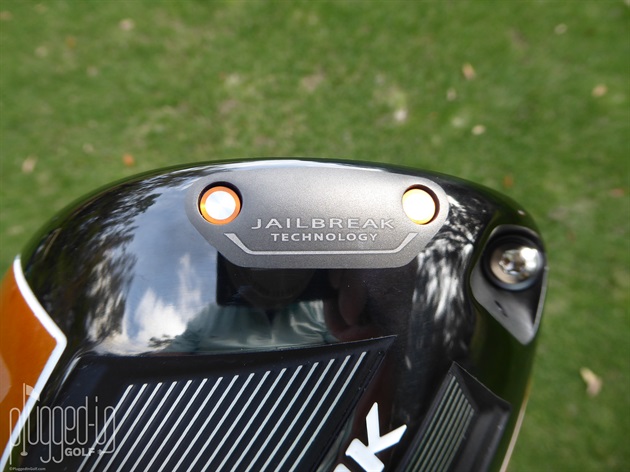 By connecting the crown and sole of the club behind the face, Jailbreak concentrates the impact forces on the face.  And that face is now made from FS2S titanium, which is “6 grams lighter than traditional titanium,” allowing designers to redistribute weight for higher MOI.  To optimize the face design with the new face material, Callaway again utilized artificial intelligence to maximize ball speed and forgiveness.  With performance expanded across a larger surface area, the resultant Flash Face SS20 gave me the noteworthy consistency – an attribute that can benefit most every golfer. 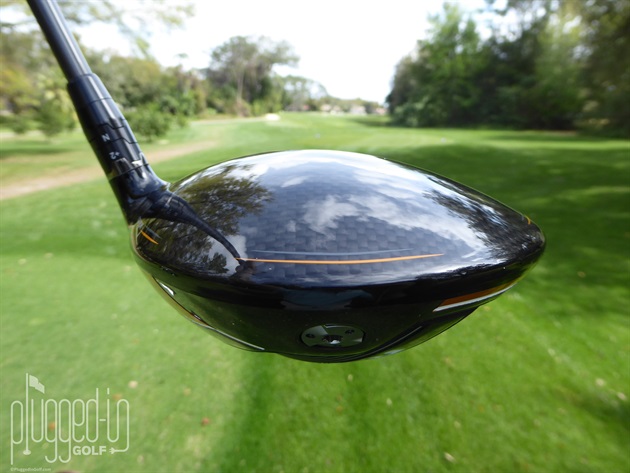 Fitters’ Take is a new feature that we will be adding to select reviews.  A panel of Master Fitters from Club Champion will share their thoughts based on their own experiences and what they’re seeing during fittings.

With regard to the Callaway MAVRIK driver, one of our fitters noted that it is low spin and that many golfers may not need the SZ model just to shave off some RPM.  “Great forgiveness” was a common refrain among numerous fitters.

Multiple fitters – and their clients – have commented on the improved sound compared to the Epic Flash.  The fitters were also impressed with the shape, one stating it’s the “best looking Callaway head” in some years.

Finally, one fitter gave very strong, in-depth praise of Callaway’s Flash Face SS20 Technology.  He stated that each model and each loft has a unique face designed to help different types of misses.  Because of this, he stated, “We can literally fit any golfer who walks through the door into a MAVRIK driver.” 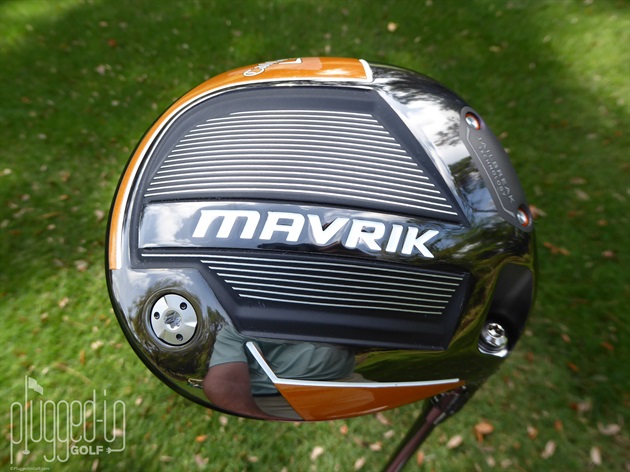 With a new color scheme, improved sound and consistent performance, the Callaway MAVRIK is sure to find its way into many golf bags in 2020.  While this standard version will suit the needs of the average golfer, it’s important to remember that ‘average’ has a ton of nuances that aren’t easily quantified.  Don’t be afraid of trying the low spinning Sub Zero or the ultra-forgiving MAX versions to see what suits your swing best.

With this review completing the trilogy of MAVRIK drivers, you were probably expecting a cheesy Top Gun reference.  But this driver deserves nothing but respect.  That said, the best – and real – call sign I’ve ever heard is FUNGUS.  Keep it family friendly if you know or want to guess what it stands for in the comments. 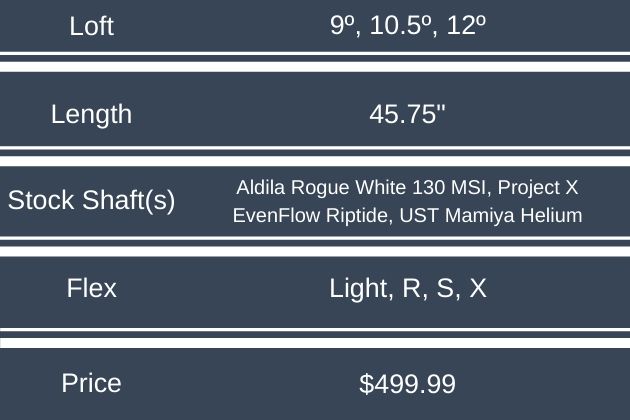