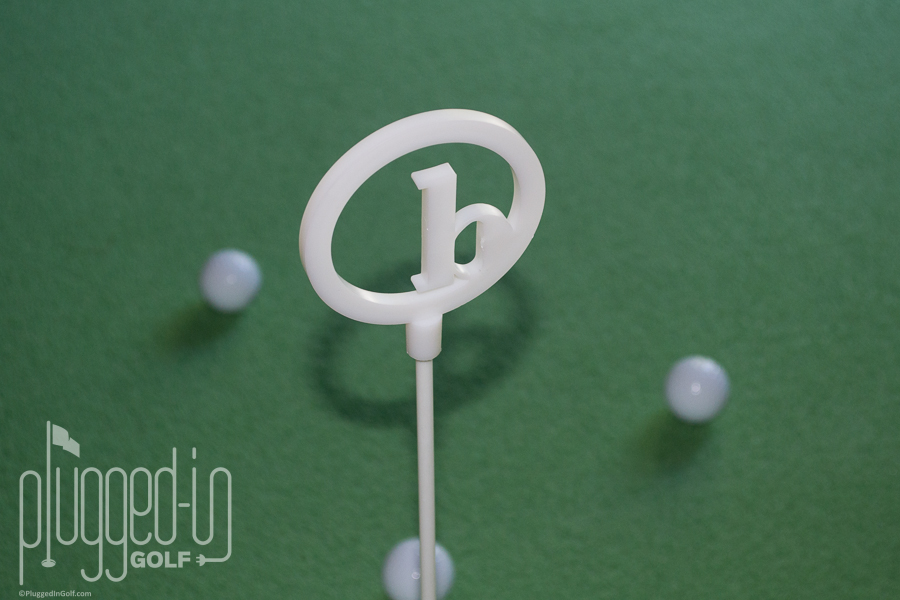 Living in Chicago, I have spent many winters dying to be able to get some sort of golf fix.  A simple putting practice session is all I would need.  What I end up doing is spending countless hours rolling a ball down a hallway or across a bedroom.  True, this isn’t the worst use of time, but it’s far from the real thing.  As I recently moved into a new house, I saw this as an opportunity to finally setup a proper putting practice environment.  Most of my research said that if I couldn’t spend a ton of money, than I needed to look into BirdieBall’s practice greens.  That’s exactly what I did, and I was fairly amazed with the experience.

***UPDATE: If you’re looking for a premium indoor putting mat, check out my review of Big Moss putting greens HERE. 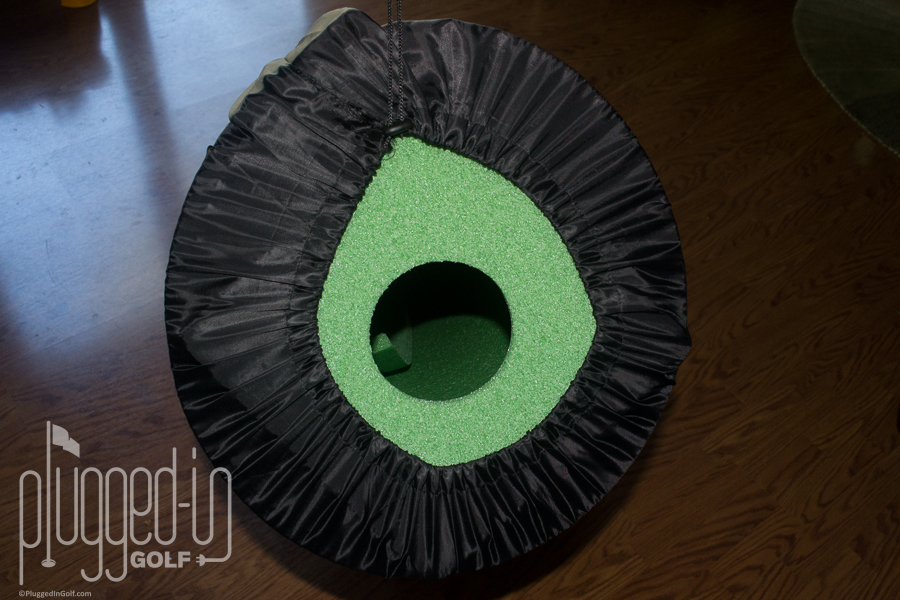 Ease of Use & Set Up

In my research, I found that a lot of practice greens were either permanent or large, complex fixtures that were totally impractical.  When my BirdieBall RollTech green showed up at my door in a box a little bigger than a golf bag, all I had to do was pull out the green, unroll it, put the plastic putting cups in the holes, and I was good to go.  It really doesn’t get much easier than that.  There are added accessories such as bumpers for the ends of the mat, a hole reducer, and shims to create breaks in the green, and they’re similarly easy to set up.

There is one critical bit of set-up information which I learned the hard way that I want to share with you.  There’s a top and bottom to the putting green – the top is “fuzzy” and the bottom is smoother – and when you roll up the putting green to store it, you must roll it up with the smooth side facing up.  This will make the BirdieBall green lay flat when it’s unrolled.  If you do it the wrong way, you’re going to have weight it down for awhile to get it flat.  BirdieBall includes an instruction sheet that clearly explains this, but of course I did not read this prior to storing it.

All in all, the BirdieBall green is very easy to use and a snap to maintain. 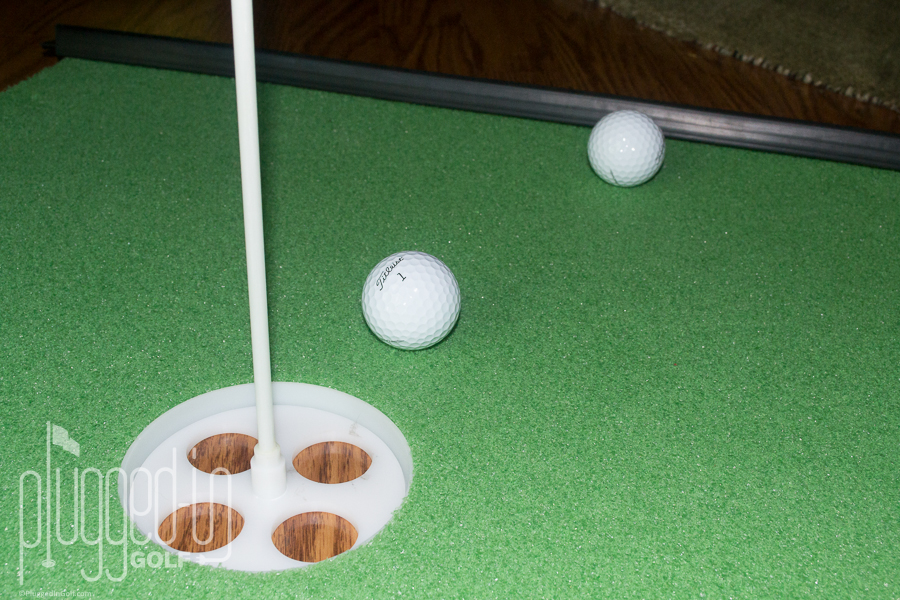 One of the biggest challenges in indoor putting greens is simulating the reality of putting on grass with pure rolls.  The BirdieBall RollTech putting greens roll true to how they are setup (flat or with break) and with good pace.  BirdieBall actually lets you order your desired stimp so you can have your green made as slow or fast as you want it.  There’s even a grain in the material so you can actually reduce or raise the speed of your green a little bit on your own.  This grain creates a unique noise that took me by surprise at first, but it’s sort of interesting to “hear” the ball rolling down the putting green.  Maybe it’s just in my head, but I swear the sound is different with a good end-over-end roll versus the dreaded wobble putt.

It’s too early to tell if I’ve taken any strokes off my game with the BirdieBall putting green, but I have been able to work on rolling putts pure on a good 14 foot surface and have had better indoor home putting practice than I have ever had.  For my money, this is the most realistic affordable practice green I have experienced to date. 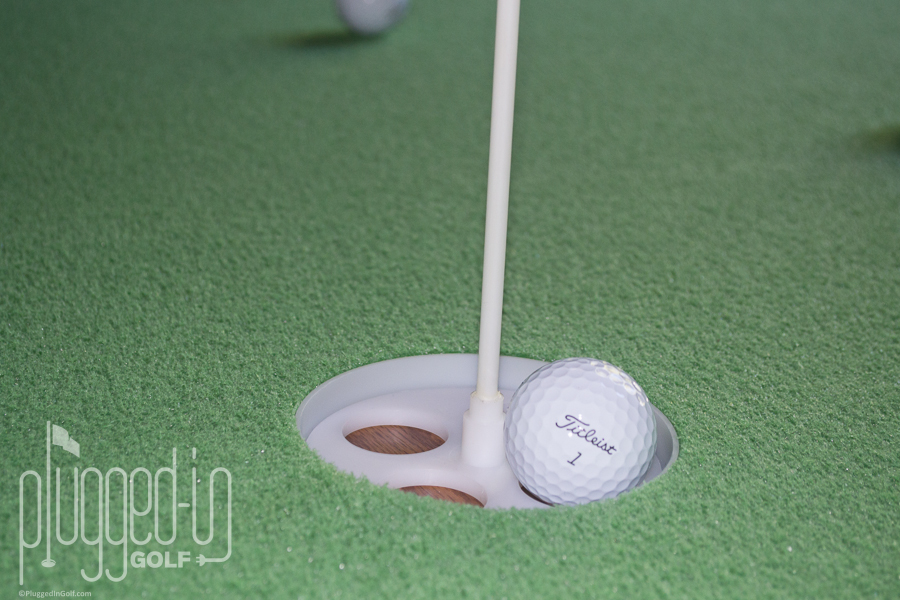 Again, it’s too early to tell if the BirdieBall putting green is going to last for years, but so far it has survived a couple small dogs and a couple of two year olds that made it their own personal playground.  The worst nightmare for the BirdieBall green is my daughter sneaking into the room and “having a practice session” of her own.  So far, it’s held up great and has been a win-win as practice aid as well as a “child entertainment system.”  The only noticeable damage came from a larger dog’s nail putting a small “spike mark” in the green, but it really has no impact on the performance of the green.

From a general use standpoint, I have spent hours putting on the BirdieBall green and it has held up very well.  The ball still rolls pure, the green hasn’t lost its shape or speed, and it has been easy to clean when it has gotten dirty or experienced a spill. 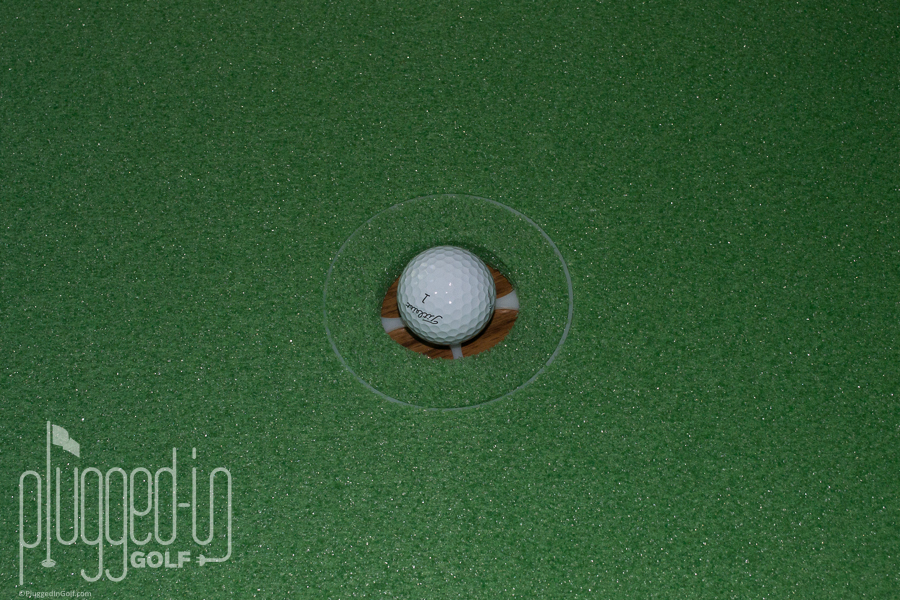 The BirdieBall green I have been using is 13.5′ long by 4′ wide and normally costs about $320, however, BirdieBall is currently offering this green for $159.  At full price, this green is probably only going to find itself in the homes of serious golfers, but at $159 it’s such a good deal that even casual golfers should consider it.  For that kind of money, you aren’t going to find a better “large” practice green that’s remotely realistic. 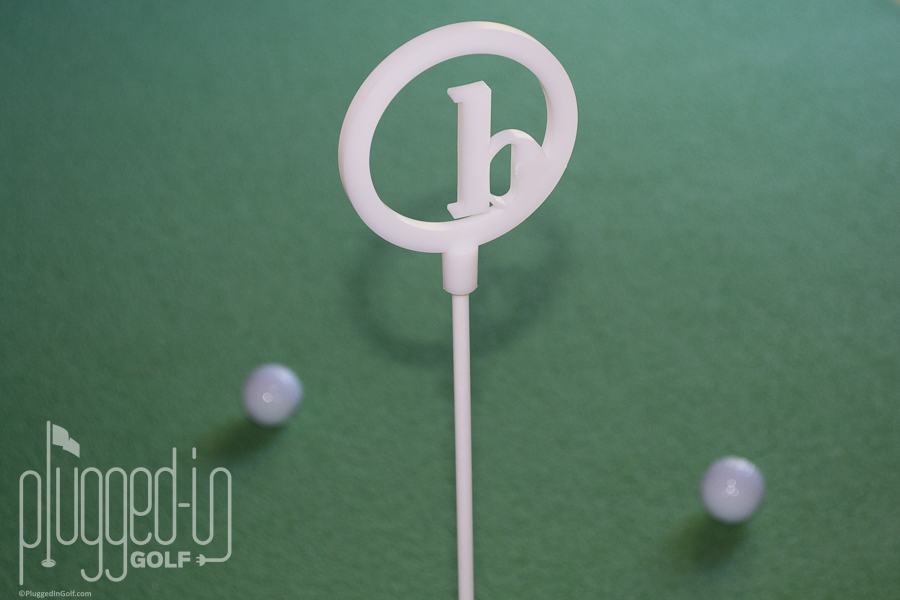 My biggest regret with the BirdieBall green is that I couldn’t get an even bigger one for my house.  A quick look around their website will show you a lot of unique and interesting options that just look flat-out fun.  Until I can convince my wife to let me take over my entire basement, I’ll continue to enjoy getting productive, realistic putting practice on my current green.  If there’s one thing I’ve learned from the guys at BirdieBall it’s that it’s important to be able to get some constructive work done on your golf game and see results, but having fun golfing is the most important part.  I’m doing exactly that with my BirdieBall green and I look forward to trying out some of the other BirdieBall products in the future. 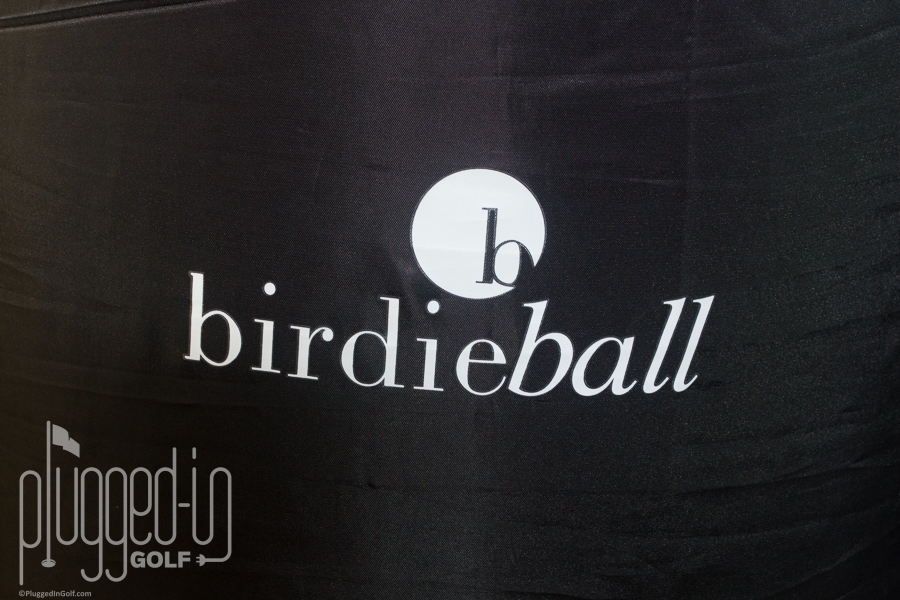 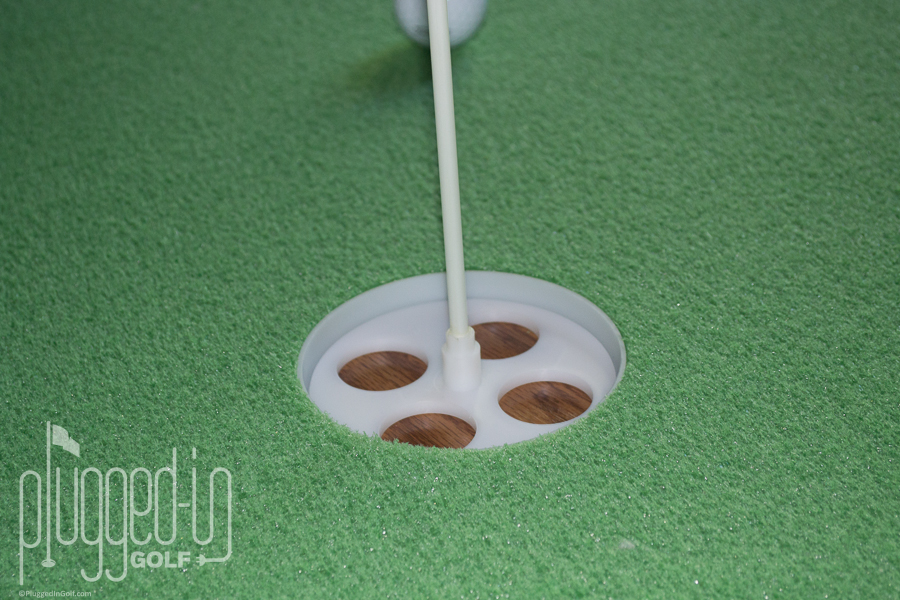 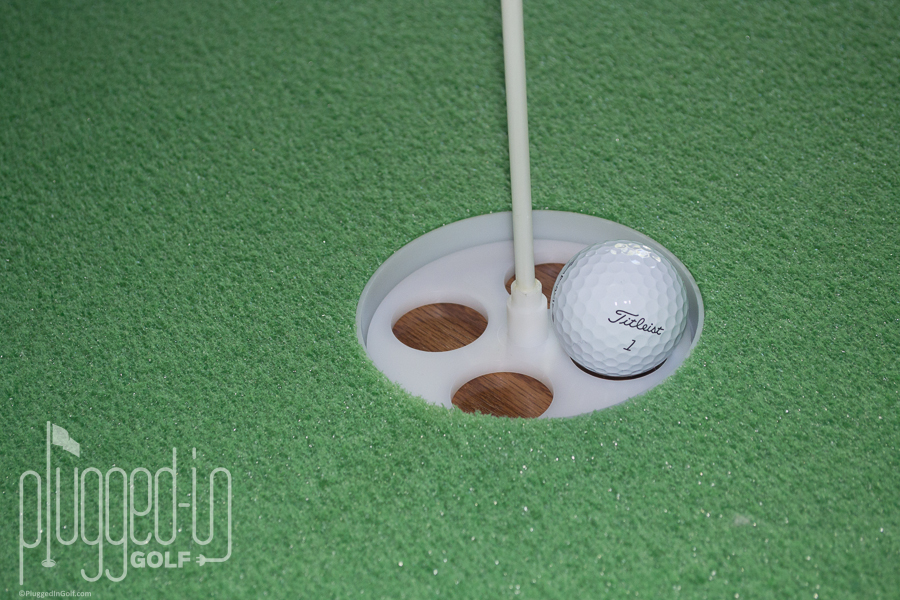 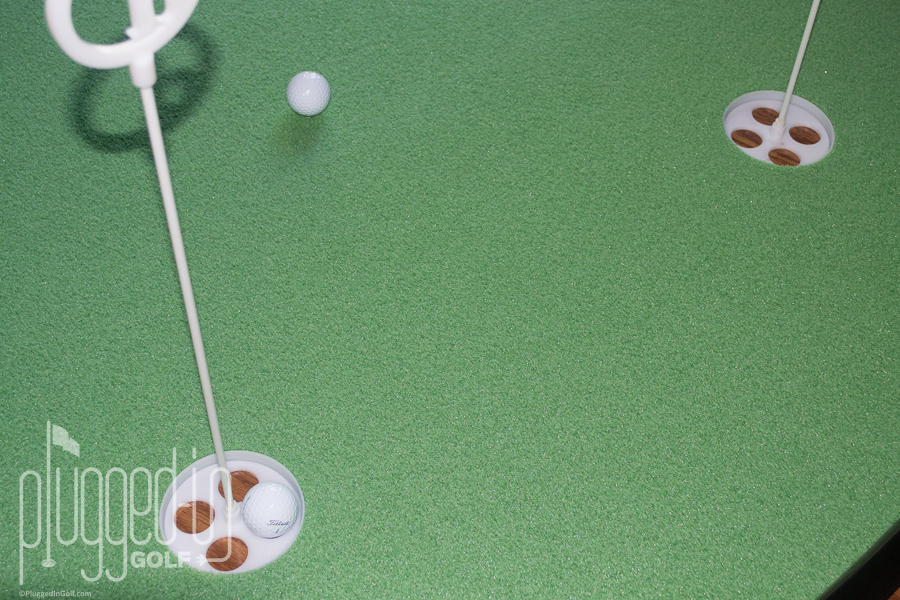 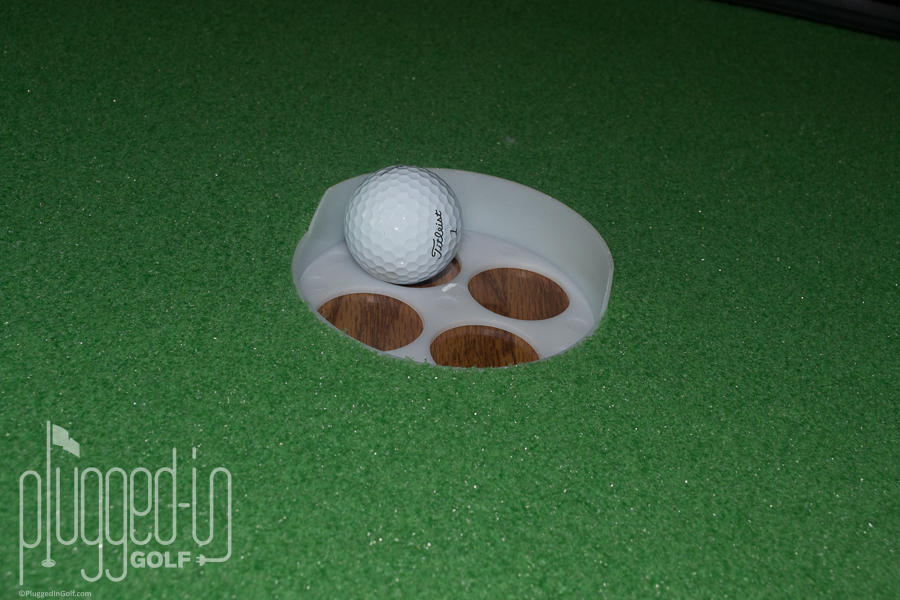