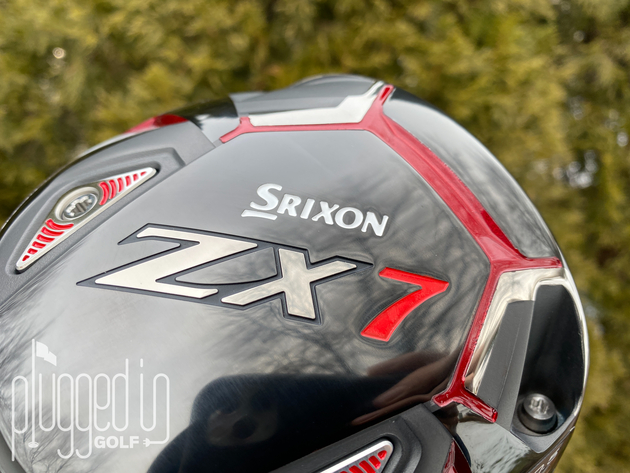 The Srixon ZX7 driver is a lower spinning driver that doesn’t skimp on forgiveness.  Great looks. 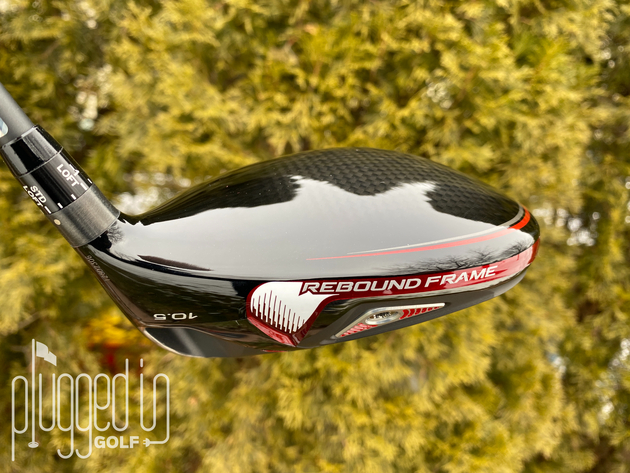 But, if we’re being honest, we already knew that Srixon could make a great iron.  Where they haven’t broken through is in the driver category.  I tested the ZX7 driver to see if it can change that. 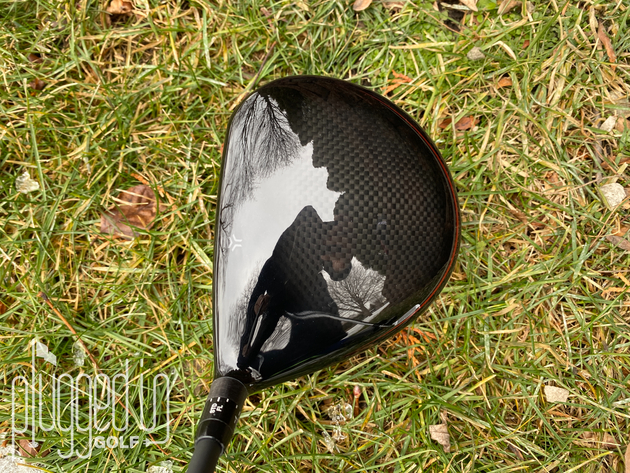 Srixon states that the ZX7 driver has “Tour Shaping,” and that it’s “flatter, shallower, and straighter.”  While “flat” and “shallow” aren’t part of my vocabulary for describing a driver, I’ll certainly agree that the ZX7 has a ton of better player appeal.  At address, it’s round, symmetrical, and compact.  The high gloss black crown has a small alignment aid and flashes plenty of carbon fiber in the middle and rear of the head.

Flipping the club over reveals bold branding across the sole.  The red and silver pop off the black base color.  With the emphasis on the “ZX7” and the geometric design, the two weight ports fly below the radar. 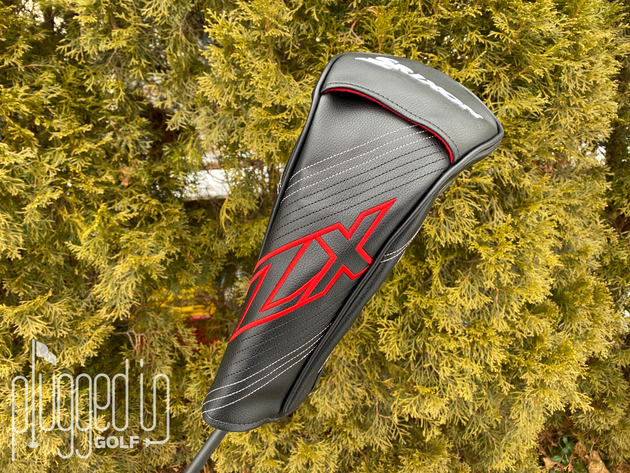 I also need to give a quick mention to the headcover that comes with the ZX7 driver.  The black/white/red color scheme isn’t breaking new ground, but when you see it in person it is fantastic.  This is one of the few stock headcovers I’d want to game. 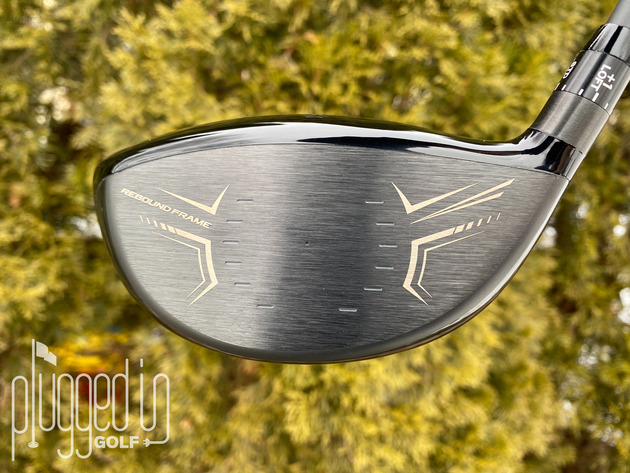 The Srixon ZX7 driver isn’t afraid to make itself known on the tee box with a louder than average impact sound.  It’s not deafening by any means, but your friends are going to know when you’ve crushed one.  The sound of contact is medium in pitch, an aggressive “crack.”  This contrasts with the feel which is actually on the softer side, especially when you hit the center of the face.

As you would expect from a Tour-style driver, the feedback from this club is above average.  I found that my hands were telling me everything I needed to know about impact location, and the sound reinforced the message when I mishit one. 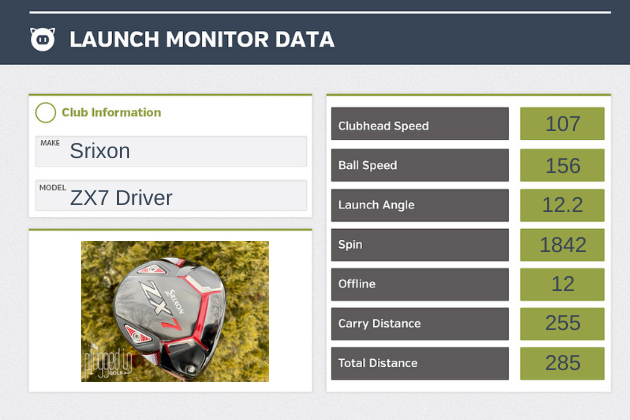 In reading up on the ZX7 driver before testing, I noted the emphasis on “penetrating” (read: “low”) launch and low spin, plus the focus on “Tour shaping.”  This set my expectations for the forgiveness rather low.  I was pleasantly surprised to find that the combination of the larger carbon crown plus Rebound Frame meant ball speed and distance stayed respectable even on imperfect swings.

The low launch and spin that Srixon talks about in their product description was evident from the first swing.  If you’re looking to shave some RPM off your tee shots or launch more penetrating drives, the ZX7 should be near the top of your list for 2021.  For those of us who could use a slightly higher launch angle or can live with a bit more spin, the ZX5 driver is probably the better choice [review HERE]. 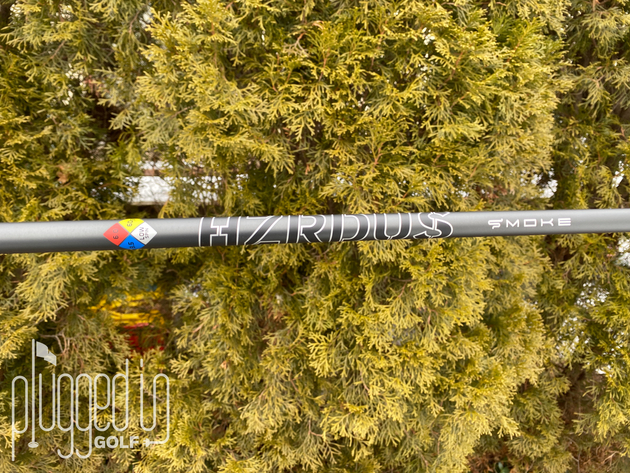 Finally, the ZX7 driver has simple, meaningful adjustability in two ways.  At the hosel, you can adjust the loft, face angle, and lie angle.  There are also weight ports in the heel and toe.  The stock configuration puts an 8 gram weight in the toe and a 4 gram weight in the heel for a neutral shot pattern.  You can flip them to promote a draw.  More weights are available – 4, 6, 8, 10, and 12 grams – through Srixon’s website at $15 per weight.  For me, the stock setting was perfect, but the additional weights are a great option for those looking to dial in swing weight with longer or shorter driver builds. 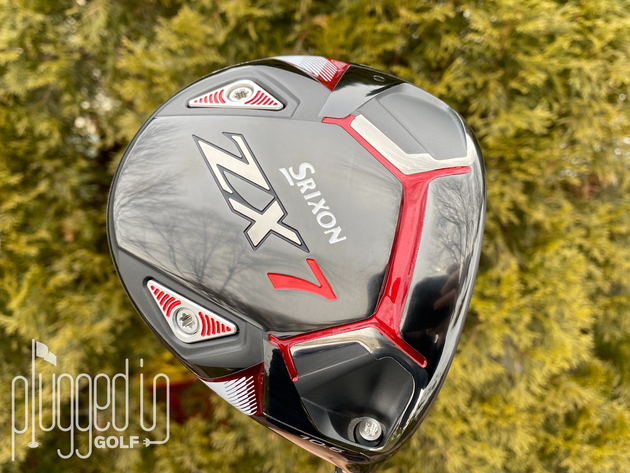 I was skeptical about whether or not Srixon could deliver a driver that was worthy of being paired with their exceptional irons, but they’ve done it.  The ZX7 driver has Tour-quality looks, surprising levels of forgiveness, and the low spin, penetrating flight that better players crave.  For the skilled, speedy golfer, this driver needs to be on your demo list for 2021. 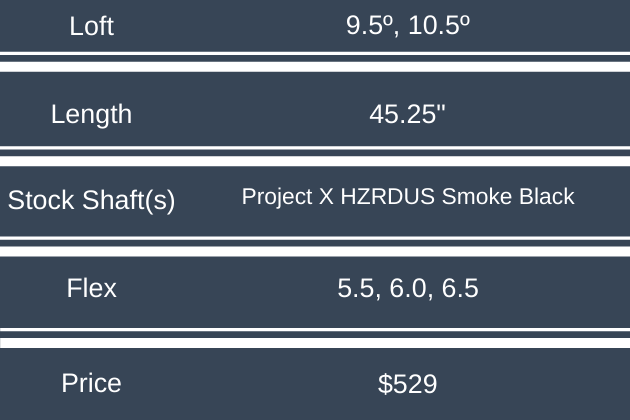