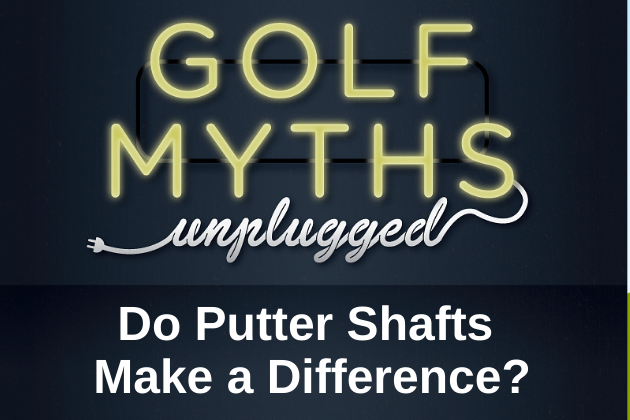 Over the last few months, we’ve seen an explosion of interest in putter shafts.  This has been caused largely by their use on the PGA Tour.  But does the putter shaft make a difference or is it just a placebo effect?  We did the testing to find out.

For this Golf Myth Unplugged, we tested seven putter shafts: traditional steel, Fujikura MC Putter Smooth, Firm, and X-Firm [review HERE], LAGP TPZ 105 and 135 [review HERE], and BGT Stability Tour [review HERE].  Each putter was built to the exact same length and lie angle with identical putter heads and grips.  Thanks to SWAG Golf for providing the Handsome One putter heads for this test.

This edition of Golf Myths Unplugged entailed two layers of testing.  First, we tested every shaft on SAM Puttlab at Club Champion.  Three players hit seven eight-foot putts with each putter shaft.  The second step was testing longer putts.  This was done with seven testers hitting the same thirty foot putt five times with each shaft. 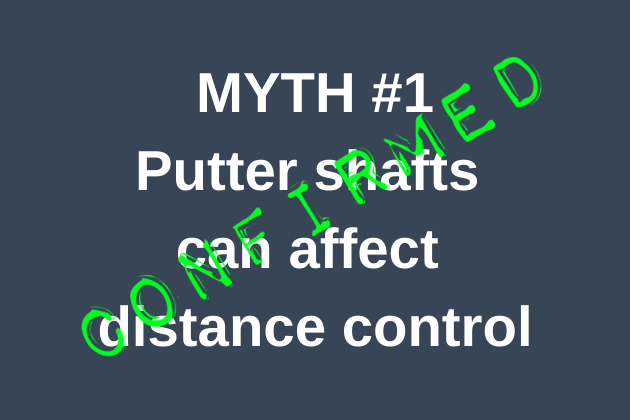 After tracking over 200 thirty-foot putts, I can confidently say that putter shafts make a substantial difference when it comes to distance control.

Across our test group, the average leave with the best-fit shaft was just over 14 inches.  With the worst-fit shaft, the group average was nearly 30 inches with some testers finishing at over 36 inches.

How significant is that difference?  If we use PGA Tour putting stats, a one-foot putt gets made 99.8% of the time.  At two feet that drops to 98.2%, and the make rate is 92.1% at three feet.  And those are the best players in the world!  Despite what your golf pals may think, a three-footer is no sure thing, so rolling it to 14 inches is a huge advantage.

When we look at the shafts that were a poor fit, the dispersion got pretty ugly.  They might get one putt within 6″ but another would be outside 36″ and another outside 48″.  That’s the kind of inconsistency that leads to frustrating three-putts. 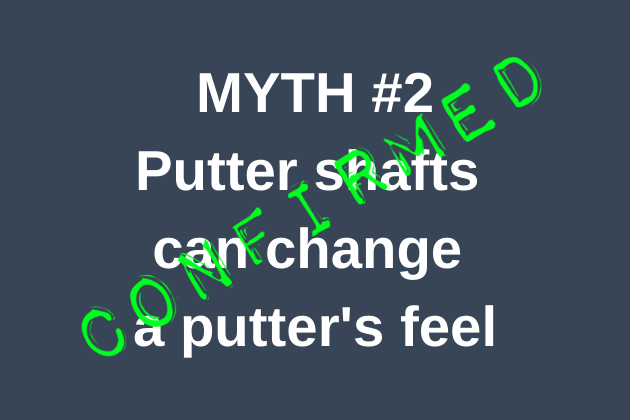 While we prefer objective metrics in Golf Myths Unplugged, feel can’t be ignored, and the results here were unambiguous.  Every one of our testers, whether they hit short putts or long putts, noted differences among the shafts.

That’s not to say that every shaft was wildly different from every other shaft.  Testers stated that some shafts felt similar, others were unique.

As you would expect, preferences varied substantially among our test panel.  The Fujikura MC Putter Smooth tended to be polarizing – people either loved the active feel or it made them uncomfortable.  Similarly, the shaft with the most counter balancing, the LAGP TPZ 135, tended to provoke strong reactions. 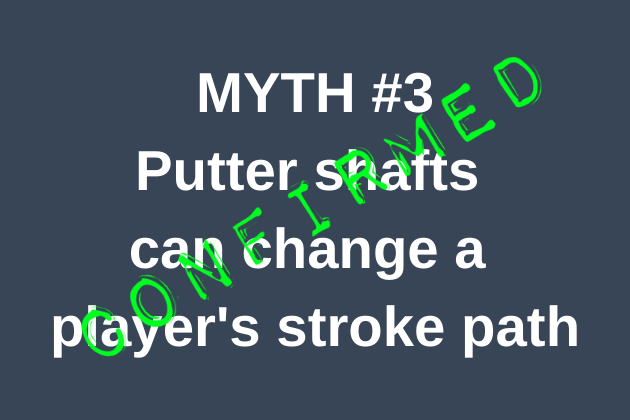 One of the big questions surrounding putter shafts is whether or not they can affect a player’s putting stroke.  We’re breaking that down into three parts: swing path, face rotation, and consistency.  To that first piece, the answer is that putter shafts can absolutely change a player’s path.

Among our three SAM Puttlab testers, we saw changes in path as large as 4.7, 3.3, and 10.7 degrees.  For this final tester, his path went from being almost perfectly straight back and through to moving substantially left through impact.

While the putter shaft is clearly an impactful part of the equation, it should be noted that for each tester, there were several shafts that performed very similarly.  That means that a random putter shaft change may or may not affect your path.

Finally, the changes were not predictable.  That is to say, we did not see Shaft X move every player’s path more left or right.  As with most things we’ve tested, the impact of a given equipment change depended on the individual. 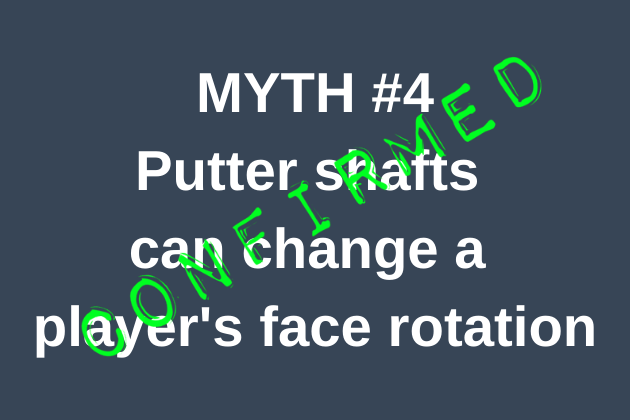 SAM Puttlab creates a variety of metrics around putter face rotation.  Among them are Rotation to Impact, Rotation Relative to Path, and Rotational Speed at Impact.  We looked at each metric and saw the same thing: a significant amount of variation among our seven putter shafts.

Knowing that the putter shaft affected our testers’ swing path, it makes sense that the face rotation changed too.  If a player’s path moves, the face angle necessary to make the putt changes also. 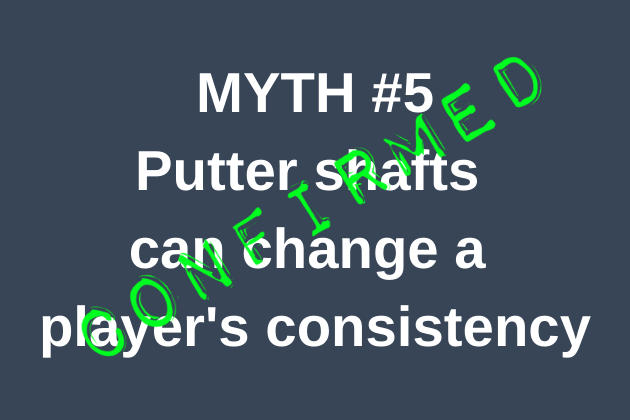 This myth gets us back into the realm of eye-popping results.  Looking at SAM Puttlab’s Overall Consistency metric, we saw variations of 10%, 18%, and a stunning 42%!

Consistency is a magic word in golf, so the idea that a putter shaft can boost (or cut) it by almost half is jaw-dropping.  In the case of our third tester, this dropped him from putting that would be considered Tour-caliber to…well below that.

Something that’s often ignored in putting is the ability to consistently strike the center of the club face, and we saw the putter shafts have an impact there, too.  Though PuttLab does not put numbers to it, it does create a graphic showing the impact location of each putt.  Looking at each player’s seven reports, we saw substantially varied impact patterns.  With one shaft a player might be consistently on center, another shaft moved their whole pattern toward the toe, and a third might cause them to be very inconsistent.

Finally, we observed that, based on feel, players were reasonably accurate in finding their best fit or at least eliminating the worst options.  If a player identified one or two shafts as feeling bad, those shafts were consistently among their worst performers.  Of our ten testers, three correctly “guessed” their best fit and the other seven preferred a shaft that performed in the top half. 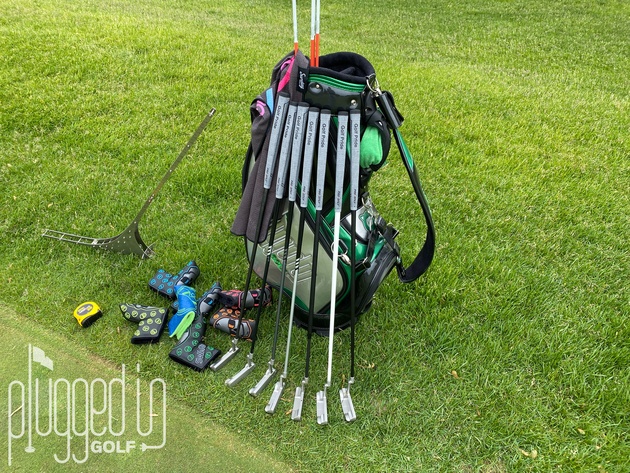 Our testing clearly shows that putter shafts can have a huge impact on your putting.  What you need to keep in mind is that this impact can be positive or negative.  As always, the key is getting fit and trying before you buy.  Whether you prefer heavier, lighter, softer, or stiffer, test a variety of shafts, get some data, and don’t be afraid to trust your feel.