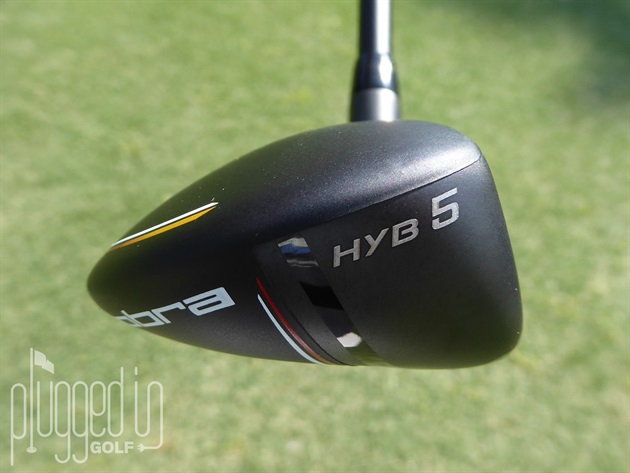 The Cobra LTDx Hybrid packs a lot of technology into a moderately sized, nice looking head.  Forgiving with consistent performance.  Low spin.  Great out of the rough. 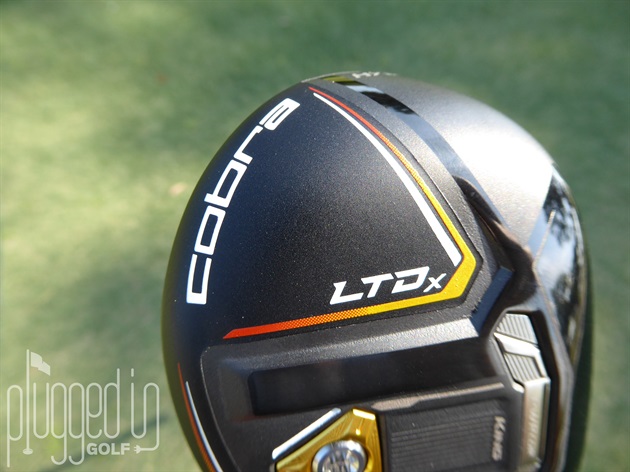 The naming of the latest Cobra family of woods and irons stems from the theme “Longest Total Distance” – hence LTDx.  And based on our reviews of the LTDx drivers and fairway [check them out HERE], the name is fitting.  But typically with their smaller size, hybrids often are limited on the technology that can be incorporated from their larger siblings.  A quick glance at the Cobra website shows the LTDx Hybrid shares all the family DNA and more.  Time to see if the LTDx Hybrid can live up to its reputation. 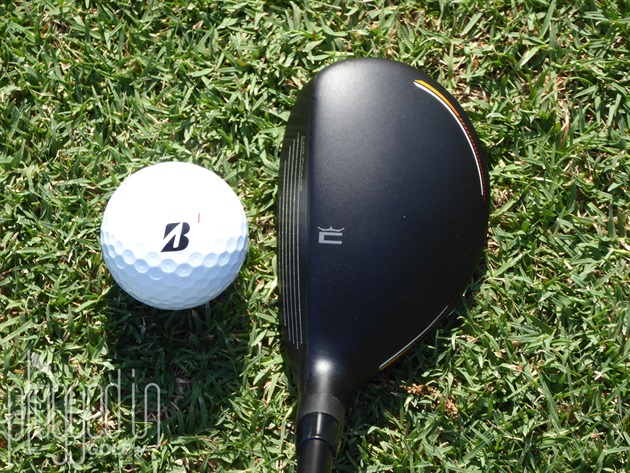 Based on colors and graphics alone, the LTDx Hybrid should be appealing to a larger audience than the turbo yellow RADSPEED predecessor [full review HERE].  To my eyes the matte finish of the crown is another improvement – bye-bye glare.  At address, the LTDx Hybrid has a rounded, slightly toe-centric shape with a modest overall size.

The toe-centric attribute is also apparent from the face-on view.  From that view, the LTDx Hybrid looks beefy and ready to tackle any conditions – like an all-American middle linebacker. 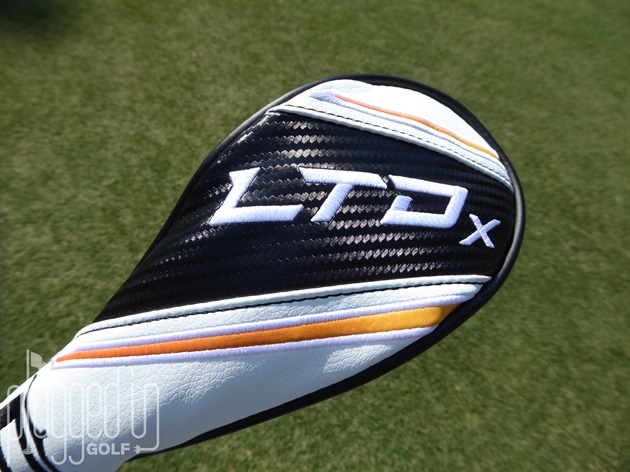 The sole of the LTDx Hybrid has a lot going on, but it all blends together nicely.  I give credit to the scale of all the text, which is well proportioned.  And a tip of the cap to the headcover not only for its looks, but also for the supple, high-end materials. 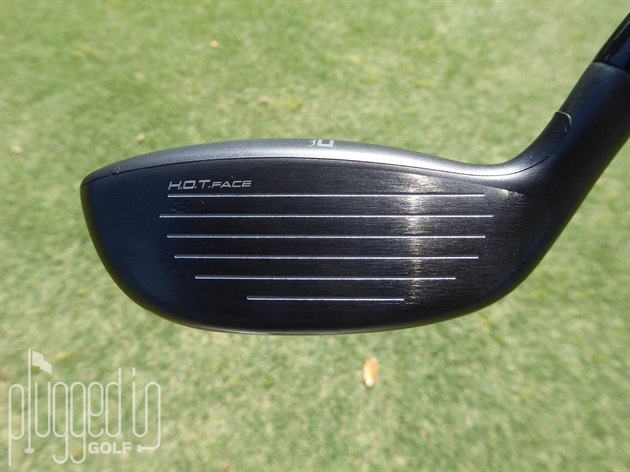 To describe the impression of the Cobra LTDx Hybrid on both my hands and my ears, the first word that came to mind was ‘solid.’  The sound, a woodsy crack, was more subdued than I anticipated and consistent across the face.  The feel was consistent in the strike zone, but there was no doubt when contact wavered towards the toe.  As testing progressed, another word became prominent:  powerful.  Short or tall grass, center struck or just decent, the LTDx felt solid and powerful – a good combination in my book. 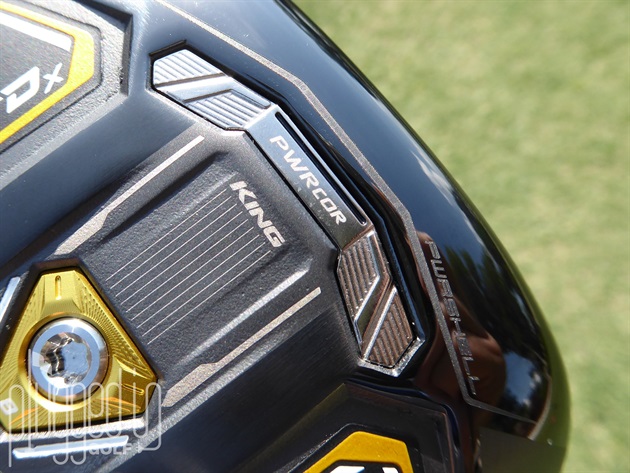 After sound and feel, I took notes on launch (mid) and trajectory (straight).  The range had recently been picked and my cluster of golf balls really stood out.  The half fairway width amount of left and right dispersion was a good indicator of solid forgiveness, but what really impressed me was the consistency on distance.

As the summer afternoon heat rose, the range emptied and I snuck forward to some thick, rough-height grass and my impression of the LTDx Hybrid rose a notch.  Not only did the clubhead glide through the turf, but catching the ball a little higher on the face seemed to boost performance.  Still straight, balls flew a bit higher and carried a little further. 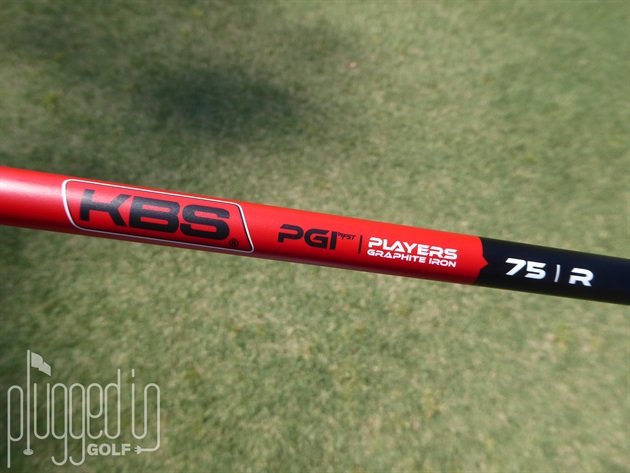 As predicted from my visual assessment, data from Club Champion confirmed the LTDx Hybrid is very consistent.  Ball speeds were great.  Spin was on the low side.  Thin strikes lost some carry distance with their lower ball flight, but strong roll-out had the total distances on par with more centered hits.

To maximize ball speed across the face, Cobra designers let their computers conduct a multitude of simulations that resulted in zones of varied face thicknesses.  The zones have peaks and valleys that resemble topography maps, which led to the name H.O.T. face or Highly Optimized Topology.

By incorporating the leading edge into the forging of the stainless steel face, Cobra designers were able to increase face flex by 17%.  The PWRSHELL design not only boosts ball speed but helps with ball launch.

Just behind the PWRSHELL is the PWR-COR – a stack of aluminum (external) and tungsten (internal) weights positioned low and forward to lower spin and, again, boost ball speeds.  The golden, 8 gram weight you can see on the sole gives the LTDx its launch characteristics. 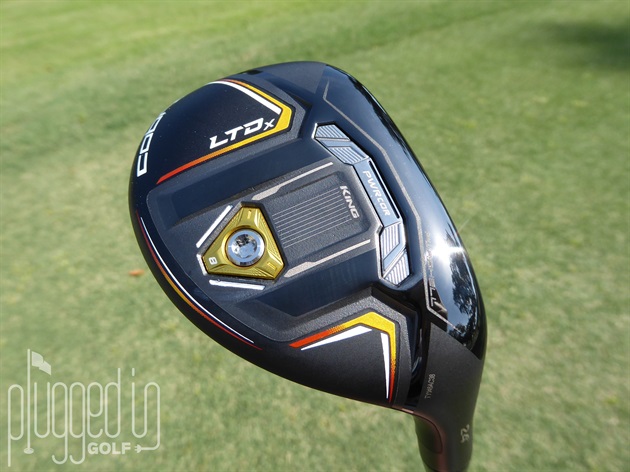 I’m certain it wasn’t easy to incorporate all the latest LTDx family technical features into the hybrid, but as usual for Cobra, their design team pulled it off.  The “and more” remark from the intro stemmed from the impressive performance out of the rough.  Those signature Baffler Rails will keep loyal Cobra hybrid users happy and make their playing partners envious. 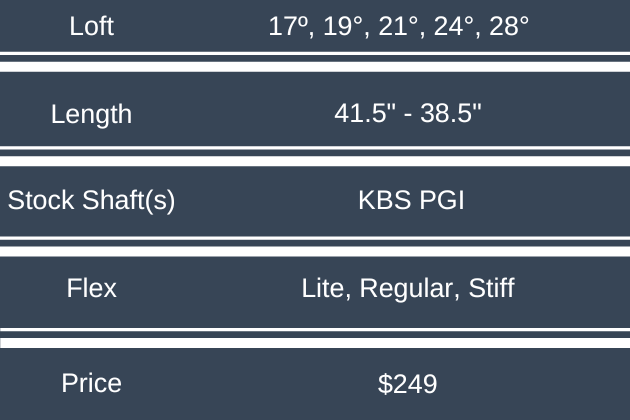