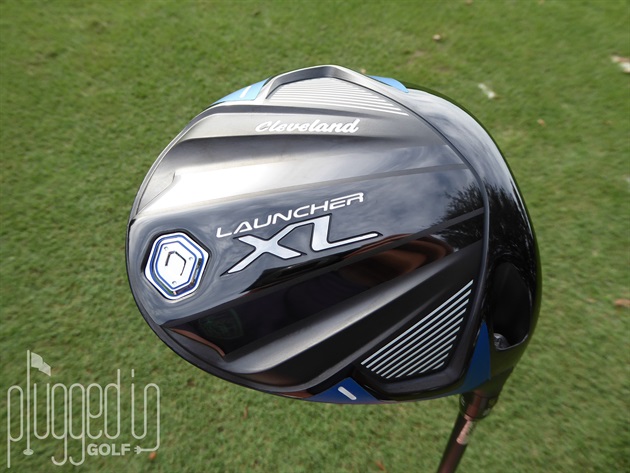 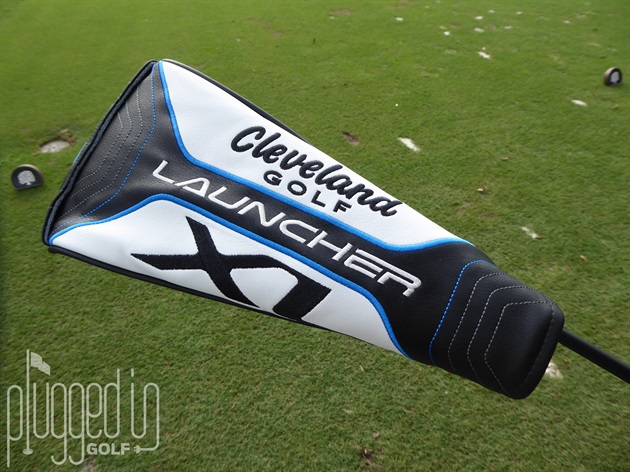 Pulling up the Cleveland Golf website to research the new Launcher XL driver, I was pleasantly surprised by the opening text:  “We think golf should be fun.”  This is something guest after guest reminds us on Matt’s podcasts [check them out HERE], yet a message often lost once we mortal golfers step onto the course.  With fun in mind, I eagerly took the new driver to the range, and with just a few swings I knew the Cleveland marketing crew had captured the essence of the club – but it’s the design team that really deserves the accolades.

“Nice” came to mind as I looked over the Launcher XL driver head from various angles.  Long front to back, the streamline shaping of the head made the overall size seem inviting.  Missing was the step down of the HiBore Crown – the hallmark of the two prior Launcher models.  While that might be disappointing for some long term fans, the fresh makeover should be a welcome change for many. 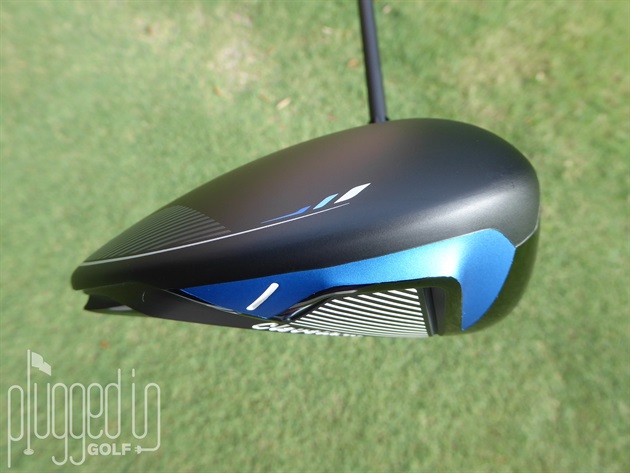 The new sleek crown design looks fantastic in the matte finish, with just a few simple trailing edge details adding to the visual interest.  The sole has a stealthy appearance with long angular channels radiating from the face.  Blue segments on the toe and heel add a splash of color that’s carried through to the shaft and headcover. 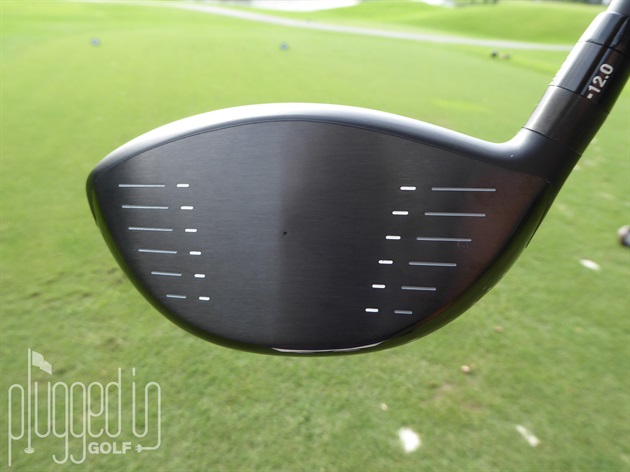 While “nice” was my first visual impression, “wow” was my reaction hearing the boisterous first strike with the Launcher XL driver.  It was more of a “wow, what was that” than a “look at me” type of impression.  The sound had a deep metallic tone that was very consistent across the face.

To my hands, every strike felt solid.  There was a little pop with centered contact, but otherwise feedback had me believing I was striping it.  A quick glance at the ball imprints all over the face confirmed that the feedback was a bit misleading.  That’s not a knock on the club, but rather a testament to the high MOI design that I’ll delve into momentarily.  To me, the powerful sound and positive feel fed the fun aspect of the driver. 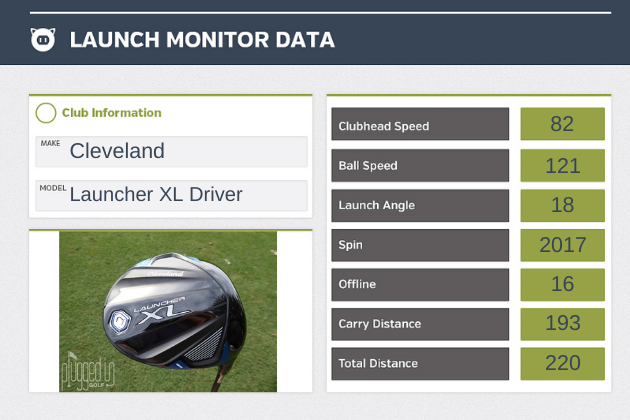 I don’t want to get too deep into the physics, but simplified, moment of inertia (MOI) quantifies a body’s tendency to resist angular acceleration.  For a club head, more resistance equates to less rotation at impact and a stable feel.  With less rotation on off-center hits, higher MOI also equals straighter tee shots.  Cleveland designers boosted the Launcher XL MOI 11% over the HB Turbo [full review HERE], creating their highest MOI driver in company history.

What I observed on the range and confirmed on the launch monitor was not only straight flight, but also consistent carry.  That’s a great combination for confidently finding fairways. The other noteworthy aspect was the high trajectory – even with spin on the low side.  The driver I tested was a 10.5 degree, typical for me, and it gave me the highest launch angle of recent memory. 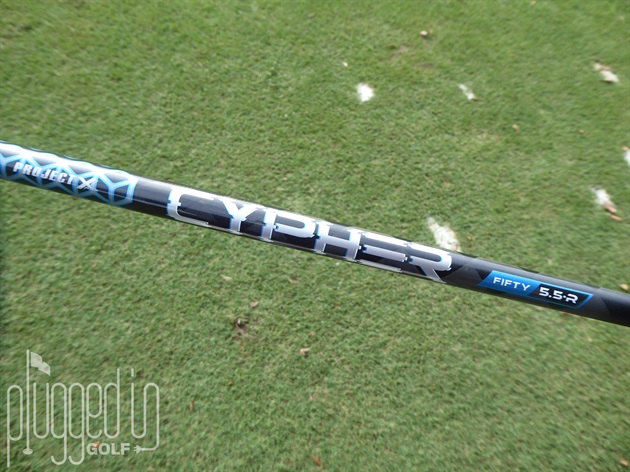 Even though the Launcher XL doesn’t physically have the step down on the crown seen in past models, it retains the physics of the rebound frame that creates a second flex zone.  Think of the design as a spring board that boosts ball speed.  In another departure from past models, Cleveland added a 12 position adjustable hosel to their latest driver, allowing golfers the opportunity to set up the club to better fit their swings. 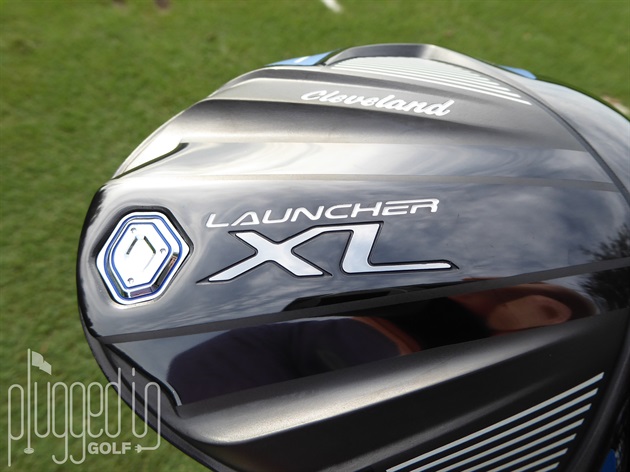 Because of its strong heritage, I highlighted changes from previous models, but the Cleveland Launcher XL is more than capable of standing on its own in the sea of 2021 drivers.  The large size may not appeal to some, but to the golfer whose main goal is hitting the ball straight down the fairway, the Cleveland Launcher XL driver is going to be inviting.  High launching and consistent, the Launcher XL driver serves up a friendly reminder to your foursome that hitting from the short grass is always fun. 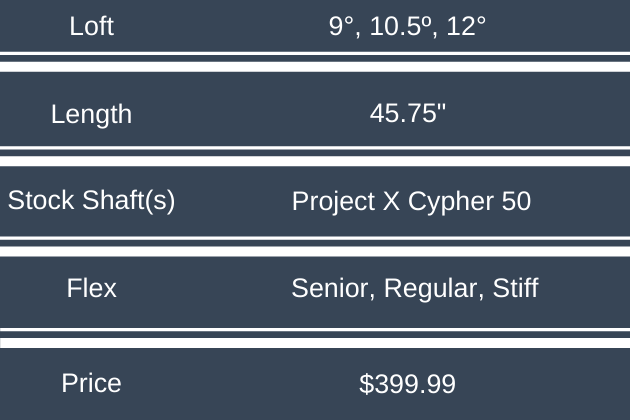