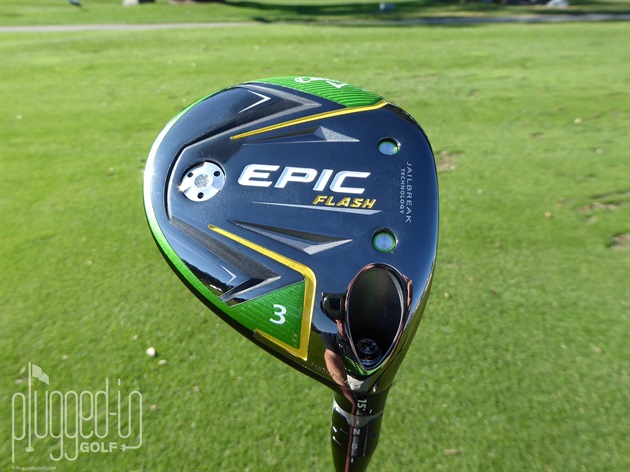 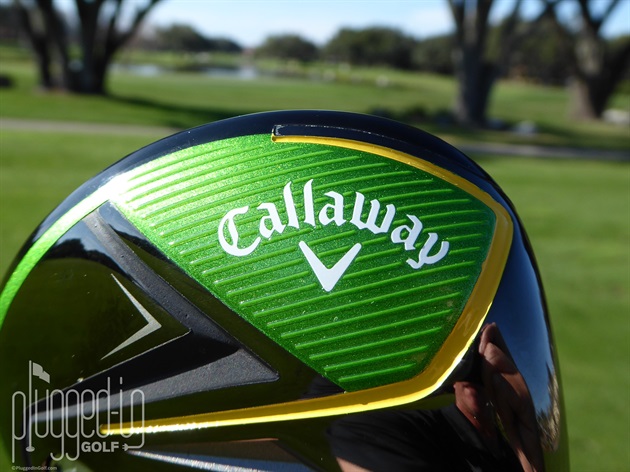 It’s been two years since Callaway introduced the world to Jailbreak Technology – exclusively in its Epic Drivers.  Even without Jailbreak, Matt S. declared the 2017 GBB Epic Fairway Woods a “must try.”  The new 2019 Epic Flash Fairways not only include the proven Jailbreak, but also the namesake Flash Face.  Using super computers to evaluate thousands of virtual prototypes, Callaway was able to discover a new face design to optimize ball speed.  Combined with an updated OptiFit hosel, the Epic Flash Fairway Wood is a versatile club for golfers of all levels of play. 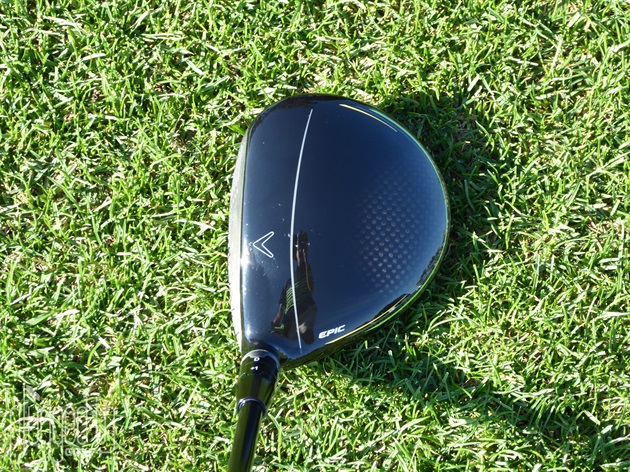 The Epic Flash is one of the best looking fairway woods I’ve seen this year.  At address, the head has a wonderfully balanced roundness that sets itself up square on the turf.  The gloss black crown reveals a carbon fiber weave in the back third when it catches the light just right.  The green and yellow pinstripes add visual interest to the trailing edge while a subtle chevron denotes the ideal strike axis.

The sole of the club includes some interesting indentations, a single weight port and the exposed ends of the Jailbreak pillars.  The face of the Epic Flash is a modest height with an elaborate etching that looks like the diagram for a space station docking port. 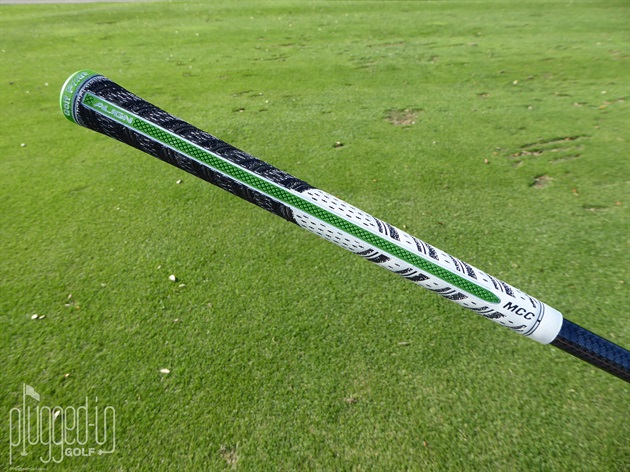 The Golf Pride MCC grip with matching green Align completes the stellar look of the Epic Flash Fairway Wood.  And don’t overlook the head cover that has a high end, custom look and feel. 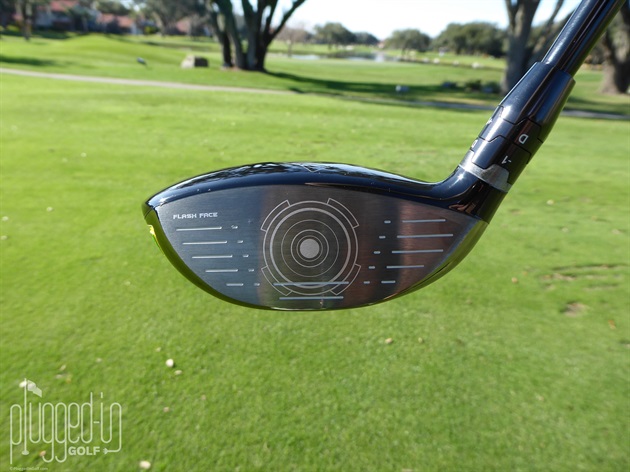 The forged 455 carpenter steel face of the Epic Flash Fairway produces a moderate volume, crisp metallic “dink” that’s fairly consistent across the face.  The sound was a touch more pure when I caught one flush.  Other than the quintessential heavy heel strike, impact felt solid with minimal feedback. 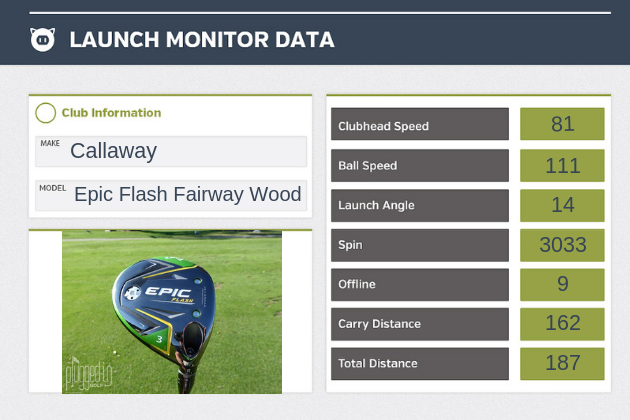 After getting to know the Epic Flash Fairway on one of those perfect “winter” afternoons in Central Florida where the ball pops against the blue sky, I was looking forward to getting in front of the launch monitor at Club Champion.  It was fun to see the tracking line paint the same mid trajectory ball flight that I’d experienced outside.  I had already determined that the club was forgiving, but seeing the landings hug the projected center line was an impressive sight.

Across the collected launch monitor data the numbers were super consistent, confirming the Epic Flash Fairway is very forgiving.  Initially I was a bit disappointed with the distance figures, but noting my swing speed was down a bit I grabbed my gamer for a side by side comparison.  With swing speed virtually identical, the Epic Flash gave me a couple more MPH in ball speed while maintaining the spin of my gamer – perfectly in line with Callaway’s claims regarding Flash Face and Jailbreak Technologies. 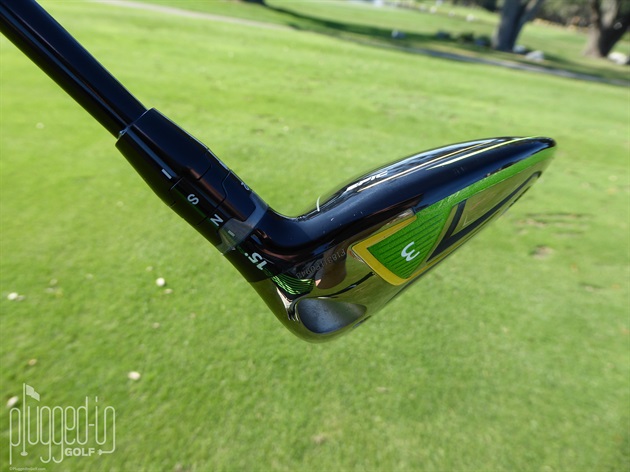 The Epic Flash Fairway is available in an impressive seven lofts ranging from a strong 3 to an 11 wood.  Equally impressive are the three premium stock shaft choices in 6 weight classes – mine is the Mitsubishi Tensei AV Blue 60.   Truly something for everyone.  To further dial in the optimum club setup, the new OptiFit hosel provides simple adjustments to loft and lie.  A not so obvious benefit of the lighter OptiFit is that the weight savings allowed Callaway designers to reposition the center of gravity for easy launch – something I appreciated when hitting out of some thicker grass. 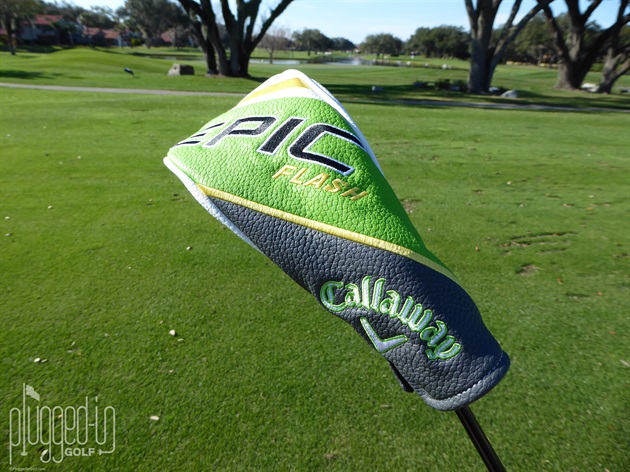 As often happens when a new club appears on the driving range, folks wanted to hit my Callaway Epic Flash Fairway.  Regardless of the swing, both in terms of speed and path, the results were consistent – excellent forgiveness and wonderful ball flight.  In the bag or in your hands, the Epic Flash Fairway is a great looking club that offers performance for golfers across the swing spectrum. 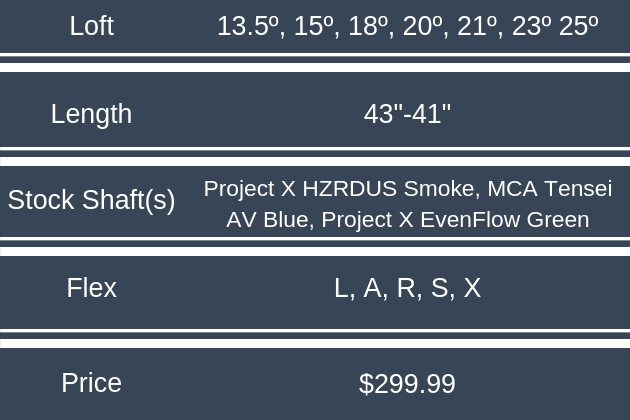