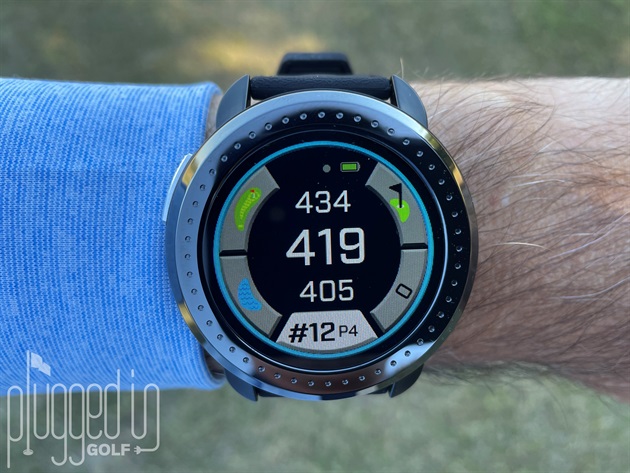 The Bushnell ION ELITE GPS golf watch offers slope-compensated distances as well as a stable of other rich features.  Color touchscreen is a delight – crisp display and easy navigation. 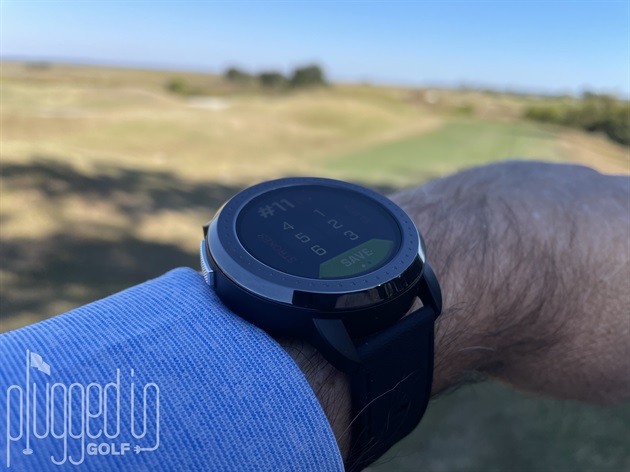 With one glance at their website I was reminded why Bushnell is such a recognized name in golf accessories.  Not only do they offer some of the most advanced laser rangefinders like the Pro X3 [full review HERE], and an array of GPS devices, Bushnell even has a launch monitor – the Launch Pro [full review HERE].

Returning my focus to the reason for my visit to the website, researching the Bushnell ION ELITE golf GPS watch, I was impressed with what I saw.  And when I got my hands on the actual watch, I was excited to put it through a rigorous test. 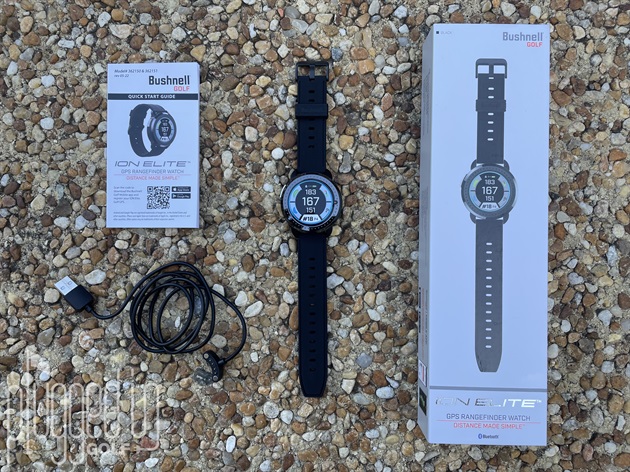 The slim ION ELITE box was indicative of the simplicity of the watch.  In addition to the actual watch, inside the box were a magnetic USB charging cable and a Quick Start Guide.  I’m certain the magnetic charging connection isn’t new, but it was something I hadn’t encountered before.  I found it genius.  The Quick Start Guide was thick, but turned out to only be 4 pages of English.  I don’t recall even referencing it before jumping right in. 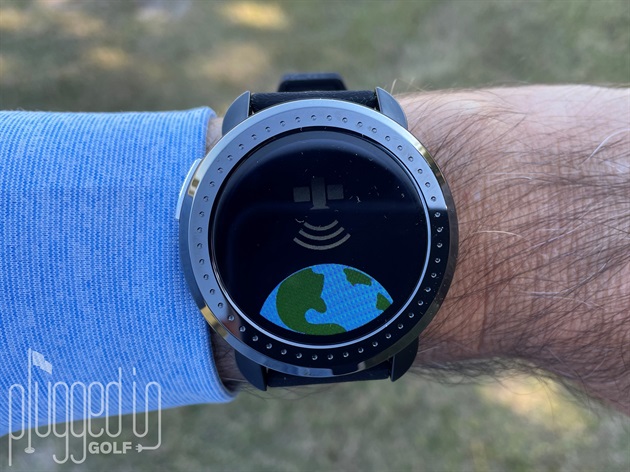 After holding the only side button down to turn the unit on, I encountered the time screen, with graphic hands as well as digital numbers.  Swiping right on the color touchscreen brought me to the initial golf screen with a choice between settings, scorecard list, and “play golf”.  A list of the closest golf courses automatically populated from a pre-loaded database of more than 38,000 courses.  It took about 2 minutes the first time, but in subsequent engagements the list populated within moments.

The ION ELITE touchscreen face was incredibly intuitive.  The front, middle, and back yardages are primary in your view.  Around the perimeter of the face, starting at the top right 2 o’clock position, are icons for GreenView, score, current hole number, HazardView, and HoleView.  Moving between any of the functions is as simple as tapping the touchscreen or pushing the side button to go back. 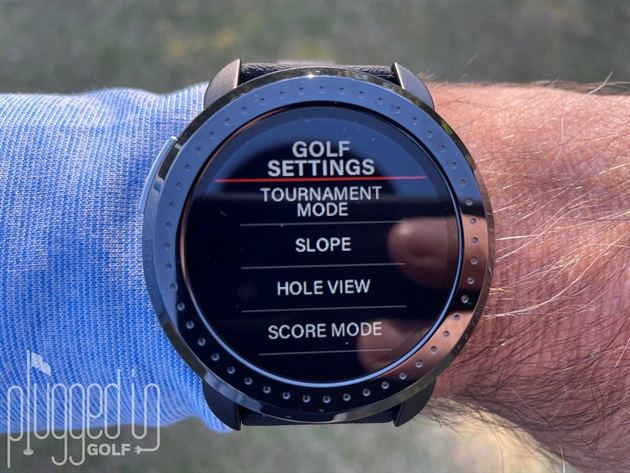 The settings mode of the ION ELITE lets you set up things like brightness, language, and units.  You can also customize display options such as yardage rings that enhance the HoleView experience.  One other key settings option is having slope compensation on or off. 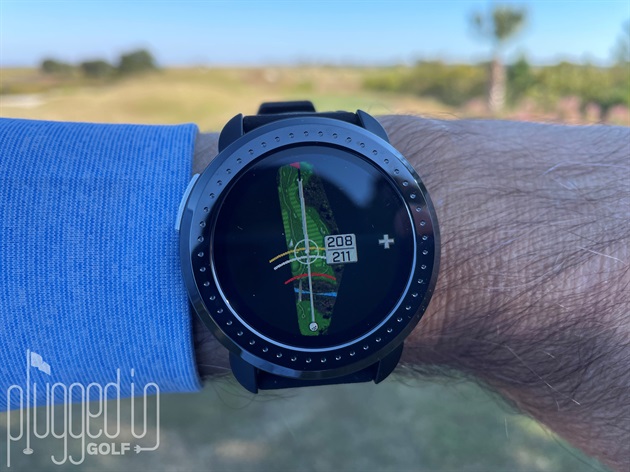 The HoleView I captured above is a wonderful example of the power of the ION ELITE.  The hole has two major hazards to contend with, as well as numerous bunkers on both sides of the fairway.  The red, white, and gold lines are stock distances I set: 150, 200, and 225 yards respectively.  I was manipulating the white circle in the middle  on the touchscreen to check on carry and remaining yardages. 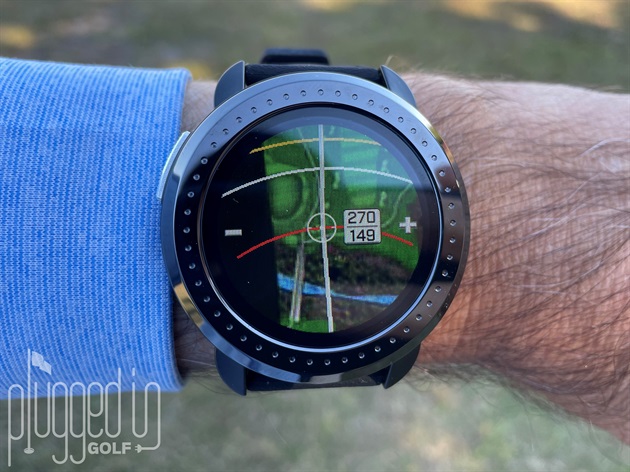 In this photo, I’ve zoomed in to evaluate the carry distance for the hazard off the tee.  Shot planning is an amazing feature. 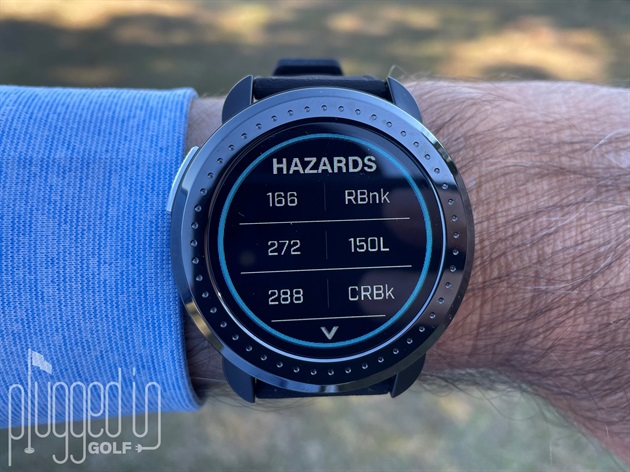 Engaging the HazardView brings up a list of the hole’s most significant hazards.  This was when I realized I’d need to consult the hazard glossary which I found in the User’s Manual that I downloaded from the Bushnell website.  Some of the abbreviations are obvious as you look down the hole (166 RBnk = 166 to right bunker).  However, you’re going to want to familiarize yourself with the glossary to maximize the data. 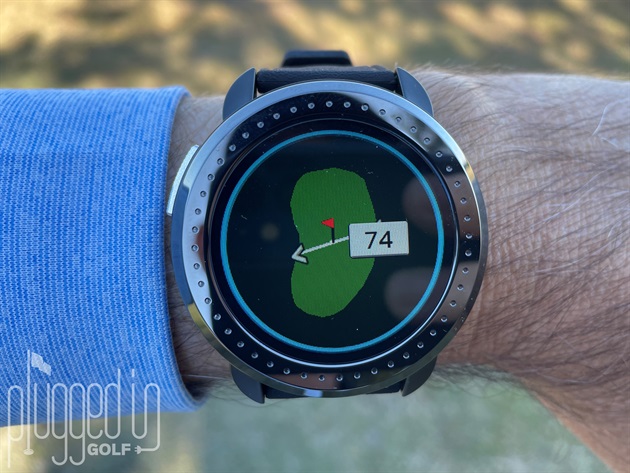 With Bushnell’s stellar reputation, I wasn’t surprised to find the GPS generated distances in agreement with my laser rangefinder.  Having the three data points on approach shots made for smart club selection – something I’ve been working on improving.  And having the values accurate on the actual line from where I was playing was also valuable.  The GreenView I captured above helped me process the chip shot I had left after missing the green way right.

The ION ELITE not only allows you to enter your score each hole, but also to track fairways hit and number of putts.  Want to know how far you hit your drive?  There’s a mode for that.  You can also pair your ION ELITE with the Bushnell Golf App. 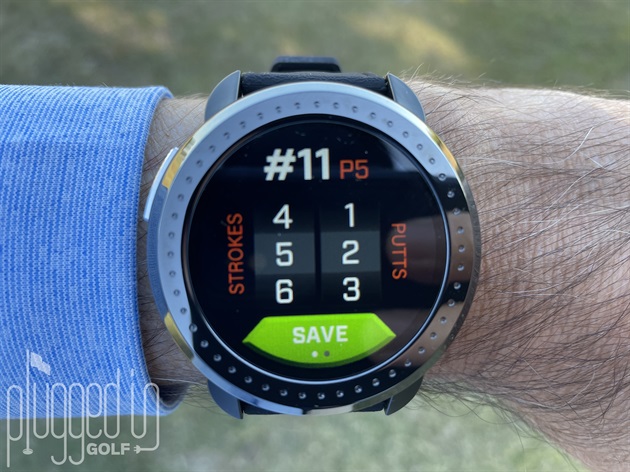 The Bushnell ION ELITE retails for $199.99, which I find an attractive price [support PluggedInGolf by buying it from our sponsor PlayBetter HERE].  It’s especially good when you consider slope compensation is included.  I’m amazed at the technology that can be assembled in a device that straps to your wrist at an affordable, though not inexpensive, price.

The color touchscreen of the Bushnell ION ELITE GPS watch clearly displays critical information in an easy to use fashion.  Slope compensation is a standout feature of this feature-rich watch.  I really enjoy the ease of charging via the magnetic connection after every couple of rounds.  If you’re looking to purchase a golf GPS watch, the Bushnell ION ELITE should definitely be on your short list.