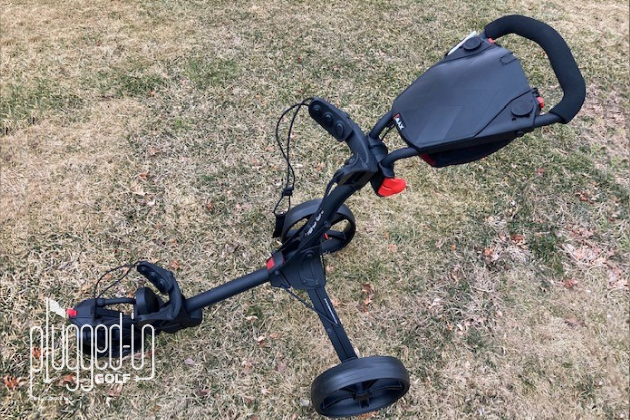 The Big Max IQ 360 push cart is a heavy duty push cart with a multidirectional front wheel and an appropriate amount of storage.  Its impressively small folded size separates it from competitors. 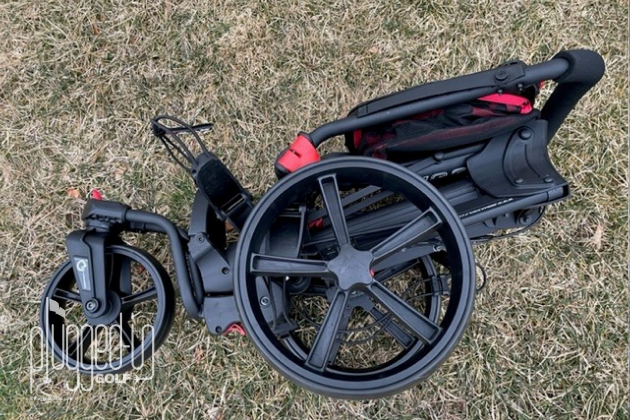 You may not have heard of Big Max as they are more prominent in Europe, but they are beginning to make their presence known in the states.  If you have heard of them, you’ll know that Big Max has been in business since 1994 and produces push carts, stand bags, cart bags, and the accessories that go with them [check out our Big Max bag reviews HERE].   With an impressive 5 year warranty backing their products, we certainly wanted to check them out. 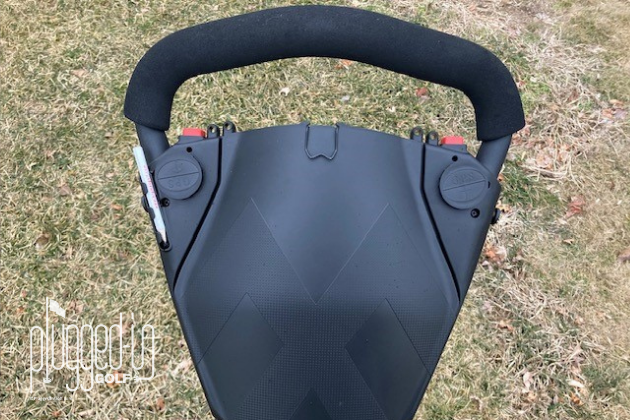 When the Big Max IQ 360 showed up, I was surprised by the size of the box it came in.  It was very compact, and setting it up was easy.   All of the buttons and latches are red while the rest of the cart is black which is certainly helpful.

The only thing that bugged me was that the legs for my stand bag prevented it from sitting snug against the cart.  Though I would have liked a better fit, my bag had no issues moving around once secured. 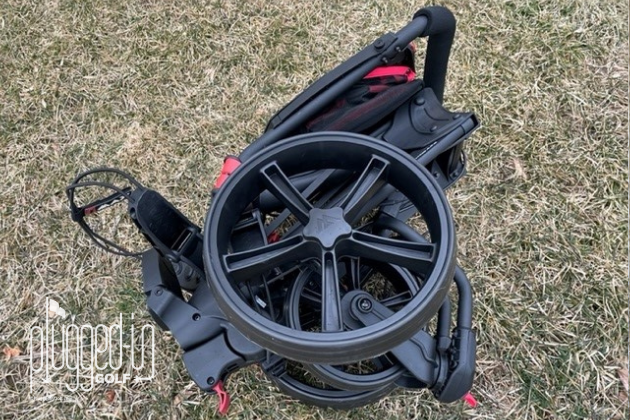 The biggest step in getting this course ready was attaching the front wheel.  It can be folded inside the cart or removed between rounds.  This is one of the most compact push carts I have ever used, and I thoroughly enjoyed having it fit so easily in the trunk of my sedan. 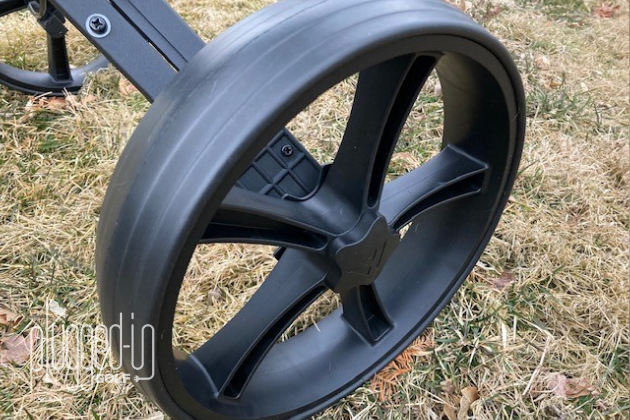 The first thing to know about the storage in the Big Max IQ 360 is that you can customize it to your exact needs.  That said, the cart didn’t come with some of the basic attachments that are standard in a lot of other carts.  A smartphone holster and umbrella stand are sold separately through the Big Max website. 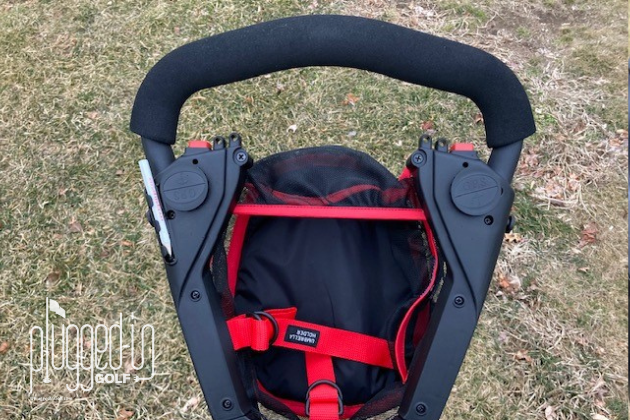 That said, the middle console is large enough for almost anything.  It’s unique as it can be used as a catch all basket or organized with divider pockets.  The console lid uses heavy duty magnets to close shut and has a small clip both inside and outside for holding a scorecard.  Adjacent to that are slots for pencils and tees and holes for Big Max IQ 360 attachments.  There is certainly enough storage to get started, but I am already on my way to ordering more attachments. 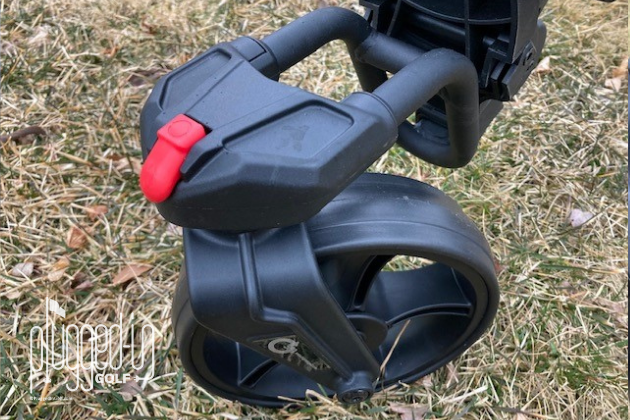 Most of the snow has melted here in the Northeast, so I was able to get the Big Max IQ 360 out on the course to evaluate its performance.  The name of the cart (IQ 360) refers to the fully rotating front wheel which helps with tight turns.  It also has a locking feature where you can prevent it from rotating.  I could see myself locking it on a more hilly course when I didn’t want it spinning down a slope. 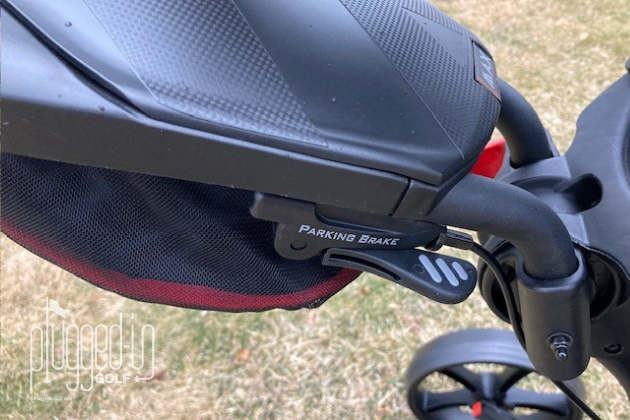 The weight of the BIG Max IQ 360 is evenly distributed, so I am not worried about the cart tipping back and falling over.  The parking break easily locks the cart in place.  Once the brake was off, the large wheels were large enough to take on any terrain.

At only 15 pound, it was easy to get around which isn’t truly appreciated until you’re uphill on the back nine.  Ultimately, the keys to a push cart are simple: easy to push, secures my bag and has enough storage for my valuables.  The Big Max IQ 360 meets all of these and more. 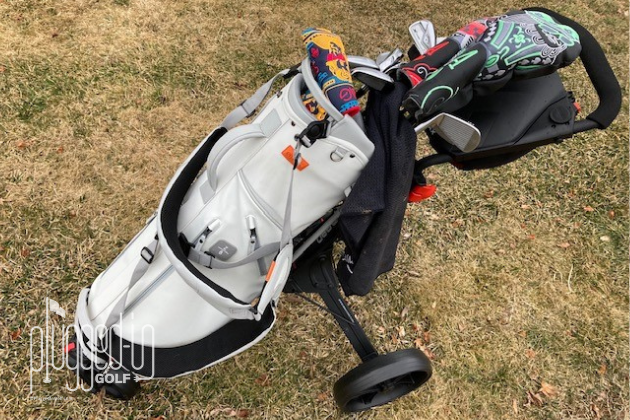 The Big Max IQ 360 uses its specialized 360 degree front wheel to help maneuvering.  The heavy duty frame folds effortlessly into a compact space.  Anyone looking for a push cart that won’t take up much room in the trunk of their car might want to check out the IQ 360.