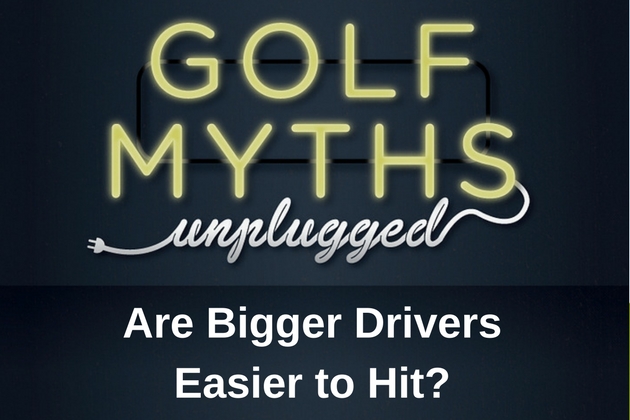 When it comes to irons, the conventional wisdom is clear.  Smaller irons are for better players.  Big irons are easier to hit and more forgiving.

Is the same true of drivers?  Most manufacturers max out the size of every driver in their line up, but is that helping the average player?  We tested some 460cc drivers against their smaller counterparts to find out. 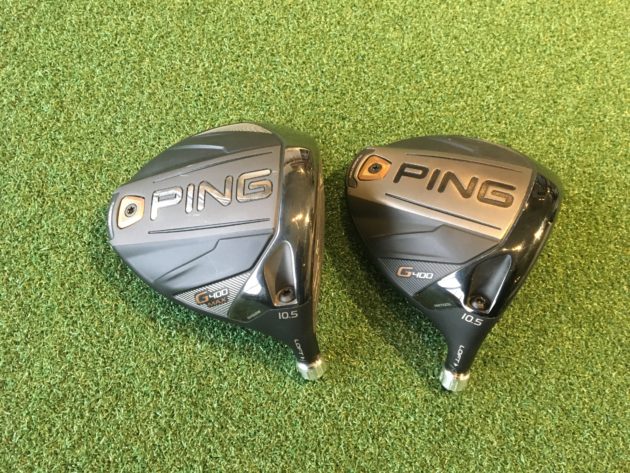 We brought together five golfers for this test, with handicaps ranging from 4 to 27.  Each player hit seven drives with each of four different driver heads: the PING G400, PING G400 Max, TaylorMade M3, and TaylorMade M3 440.  Every player used the same shaft in each driver, and the adjustments on the heads were held constant.  Each shot was recorded on Trackman. 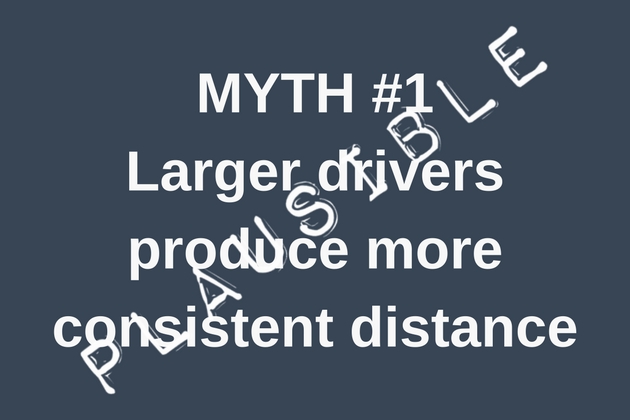 Overall, the larger driver heads produced more distance in our test, but there were enough exceptions to rate this myth “Plausible” instead of “Confirmed.”

We looked at the distance issue from a number of different angles.  First, we looked at carry distance.  By this metric, the bigger heads won 8 out of 10 trials.  When we switched to total distance, the margin was closer: the larger heads went 6-3-1 (one of those losses was by 0.2 yards).

The main takeaway here is that, by virtue of being more forgiving, the larger heads consistently produced more ball speed relative to club head speed.

There were also a couple interesting nuggets in the data.  First, swing speed did vary significantly between larger and smaller heads but without a consistent pattern.  Also, there was no clear pattern regarding club size and launch or spin.  Smaller heads are thought to be lower spinning, but that wasn’t universally true in our test. 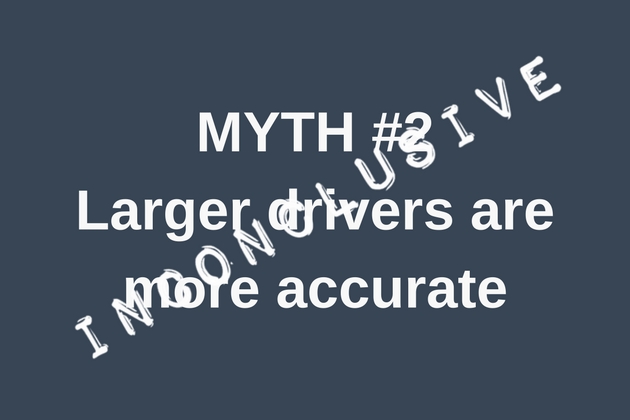 In one of the more surprising results, the larger drivers did not prove to be more accurate.  Whether we looked at average distance offline or the size of the shot grouping, it was a pure toss up between the larger and smaller heads.

This is one test where I believe that a larger sample – specifically more shots for each player, over a longer period of time – might change the outcome.  Larger heads should have higher MOI and thus produce straighter shots on mishits.  That won’t change anything for the player that loses control of the club face or swing path, but I would expect it to show up over a larger sample. 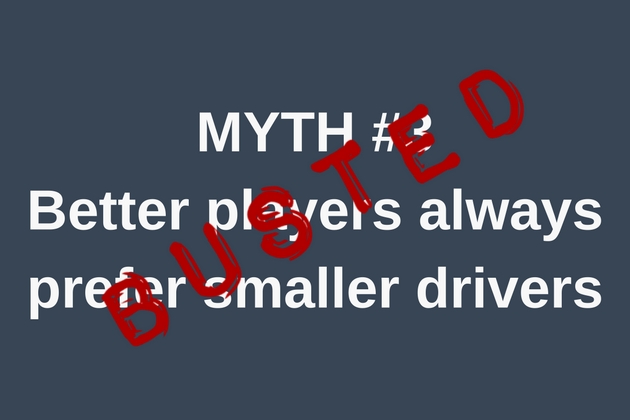 For this myth, we evaluated the claim above and its counterpart – less skilled players prefer larger drivers.  We found both to be lacking.

The highest handicap player in our test was the one with the strongest preference – for the smaller TaylorMade driver.  Our two lower handicap players were generally indifferent, moved only by the better results they got from the larger heads.

One interesting thing came to light during the questioning.  Most players did not have any preference between the two PING drivers, but everyone noted a large visual difference between the two TaylorMade drivers.  This speaks to the fact that shaping and crown graphics can have a significant impact on how big 15 or 20 ccs looks. 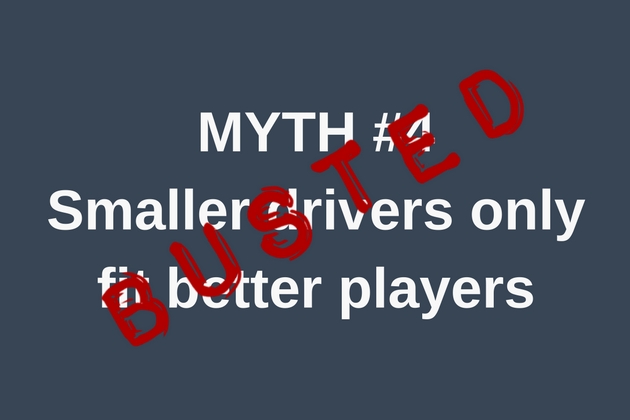 Like the preceding myth, this is busted on both front.  Not only did our best players hit the larger heads better, our higher handicap player was best with the smaller heads.

There are two major factors that explain why this myth doesn’t stand up.  First, comfort over the ball is important for players of all abilities.  Our highest handicap player preferred the look of the smaller heads and proceeded to hit them better.

More importantly, there is not one set of launch conditions that will fit all players in a given handicap range.  Higher launch is often thought of as something that slower swingers need, but two of our faster swingers launched the bigger heads higher and got more carry distance because of it.  For our slowest swinger, lower spin added distance.

Whether you’re a 20-handicap who wants to try a smaller driver head or a scratch player who games a sub-460 cc driver because you’re “supposed to,” I hope this has given you the motivation to try something new.

As we have shown time and again, there are no hard and fast rules when it comes to club fitting.  Larger heads did prove to be more forgiving when it comes to ball speed, but that didn’t translate to more distance for every player.  Rather than relying on conventional wisdom, book a session with a skilled club fitter to find out what will work best for you, and don’t be afraid to try something out of the box. 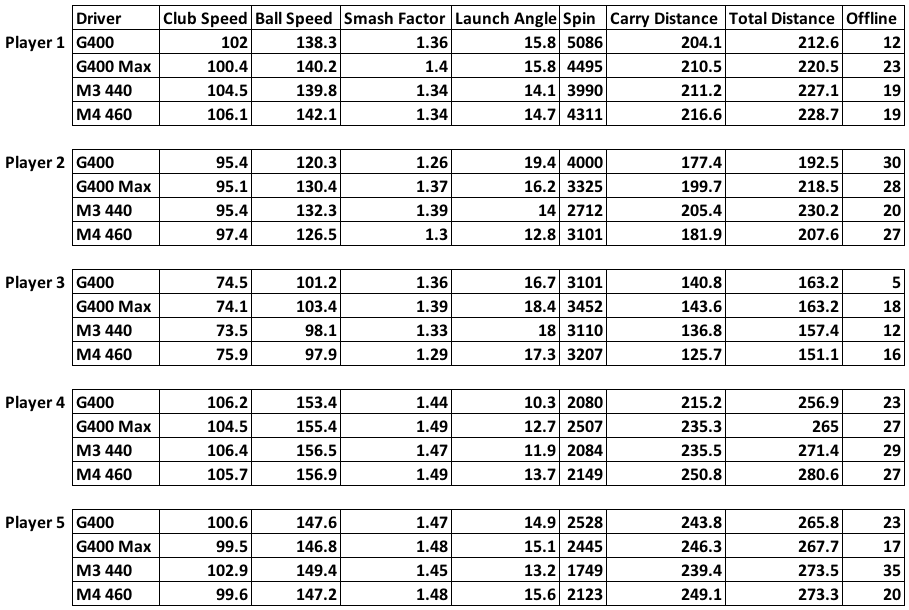