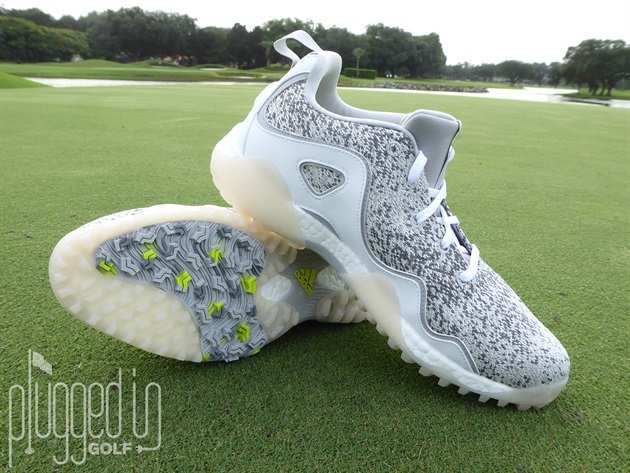 Designed to maximize traction and enhance footwork, the adidas CODECHAOS 21 Primeblue are also wonderfully comfortable.  Unique look will turn heads but may leave some scratching them.  Utilization of upcycled plastic waste adds to the appeal.

Learn about the latest CODECHAOS – the 22 – HERE 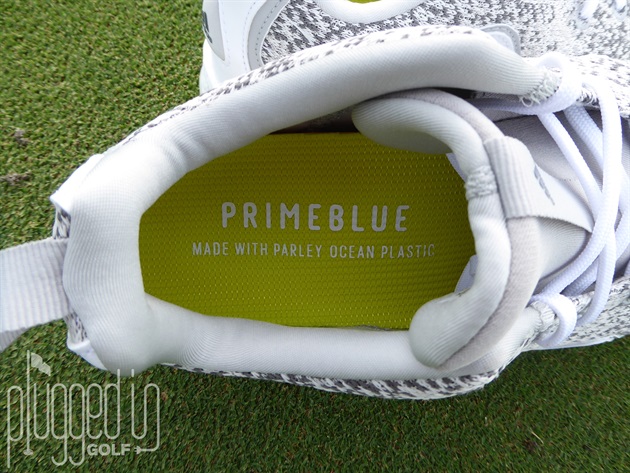 When I reviewed the original CODECHAOS Primeblue [full review HERE], adidas had committed to using only recycled polyester in all their products by 2024.  So I was impressed reading that no virgin polyester is used in the textile uppers of the new CODECHAOS 21 Primeblue spikeless golf shoes.  Even better, 75% of the recycled poly is sourced from Parley Ocean Plastic – a wonderful organization that brings together brilliant minds to raise awareness and upcycle some of the estimated 8 million metric tons of plastic waste found on the beaches and shorelines of our oceans each year.  If that’s a difficult number to get your mind around, picture 1,440 dump trucks emptying nothing but plastic waste into our oceans each and every day. 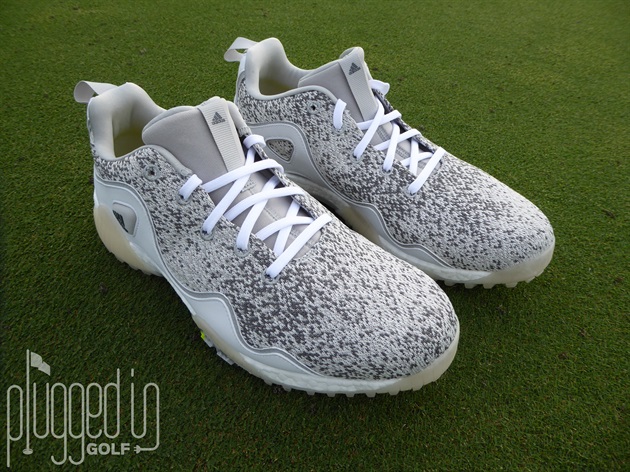 From the very first glimpse of the CODECHAOS 21 Primeblue, I was amazed at their uniqueness, but it took a few moments to put my finger on what it was.  Knit golf shoes are nothing new – we’ve reviewed models from several brands the past couple of years.  And adidas has used eye catching interlocking colors before – again nothing new.  Then it came into focus.  What really turns up the groovy meter on the CODECHAOS 21 Primeblue are the wavy overlays that convey motion and give the shoes their distinctive contemporary look.

Like the previous CODECHAOS generation, a colorful puddle of traction elements adds an artistic flair to the outsoles.  I’m a big fan of the pop of neon yellow that’s revealed as the outsole playfully wraps around the outer edge of the shoe.

In addition to the white/grey colorway featured in this review, the CODECHAOS 21 Primeblue also come in black/acid mint, all grey, and white/blue/red. 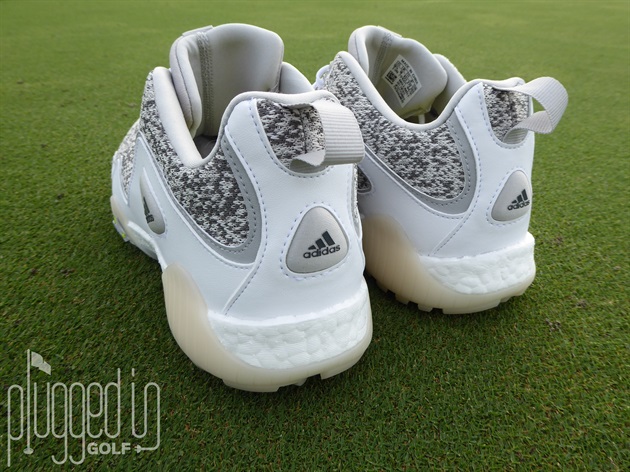 Having gamed the original CODECHAOS golf shoes for dozens and dozens of rounds, I had high comfort expectations for the 21 Primeblue, and the shoes really delivered.  Inside the shoe, the supportive arch and cushioned insole felt like old friends ready for a full day of play.  Up front my toes had room to wiggle, while my heel was cozy and secure.  The cut around the ankle is a bit higher in front of the big bump of the fibula than the previous generation, but there was enough flex in the material to keep it from being a nuisance.  Back on the plus side, the longer tongue on the 21 Primeblue eliminated the irritating pinch point that sometimes occurs at the intersection of the foot and ankle.

The CODECHAOS 21 Primeblue were good to go right out of the box.  In fact, they felt like a clone had been breaking them in for me.  Nothing in the flex of the sole, or the outsole itself, gave any indication these were golf shoes as I walked in the house, drove to the course, or strolled around the grocery store afterwards.  Along with being lightweight, add in the responsive bounce of the Boost midsole and these are shoes you won’t mind wearing all day long if needed. 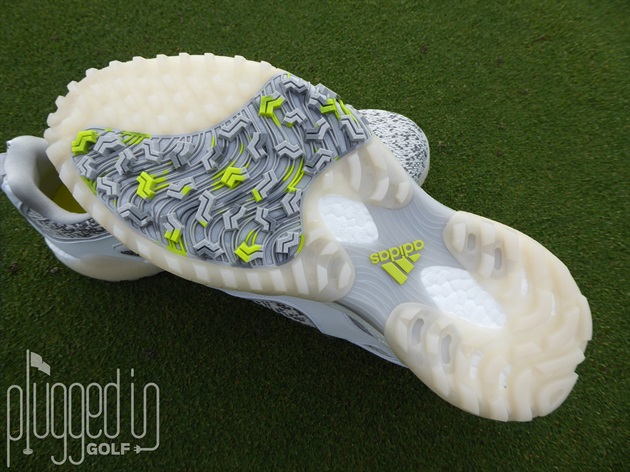 Comfort while walking is great, but it’s performance during the swing that truly defines a golf shoe and the CODECHAOS 21 Primeblue performed admirably.  If you’re a fan of the original CODECHAOS, you’ll be pleased to know that TWISTGRIP and the torsion X stability bar have returned.  If those are new terms that sound a bit alien, both literally and figuratively, I’ll explain in more detail momentarily.  In my testing, the most appreciable change in this latest version is an increase in lateral stability, which I attribute to the wavy overlay panels on the sides of the shoes.

Back to TWISTGRIP.  Utilizing heat mapping to analyze the way golfers distribute weight throughout their swing, adidas designers were able to determine what lug shapes and sizes provided the best traction.  The end result is what adidas calls TWISTGRIP.  Analyzing my own game, the traction has been excellent across the gamut of conditions.  Short or long grass, hard pan or sand, CODECHAOS traction was always solid.

The torsion X stability bar (the grey piece at the adidas logo in the photo above) may seem self-explanatory, but there’s more to the performance impact than just stability.  The design of the element harnesses and directs flex in a fluid manner that made my footwork seem powerful.  There’s no doubt that the 21 Primeblue is a mobility shoe, but there’s a good amount of stability where and when you need it. 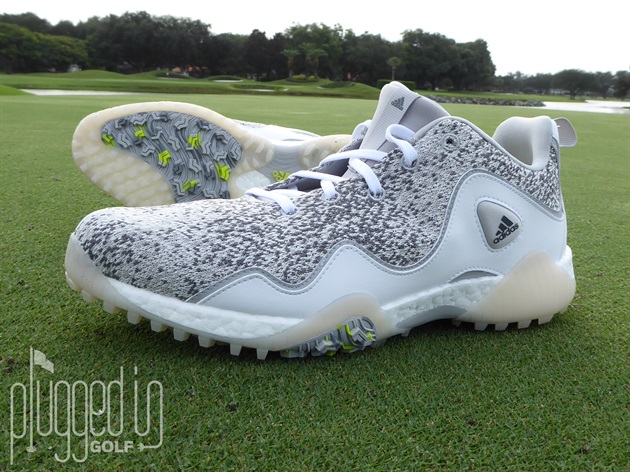 It’s no secret that the adidas CODECHAOS was one of my favorite golf shoes of 2020, and the 21 Primeblue is destined for my shortlist this year.  With the distinctive overlays on the woven uppers and the eye catching outsole, the CODECHAOS 21 Primeblue are sure to garner more than a few head turns around the club house.  Regardless of the style quotient, the comfort and performance are something that most golfers can appreciate in a spikeless golf shoe.  It’s also nice to know your choice in footwear benefits the environment.