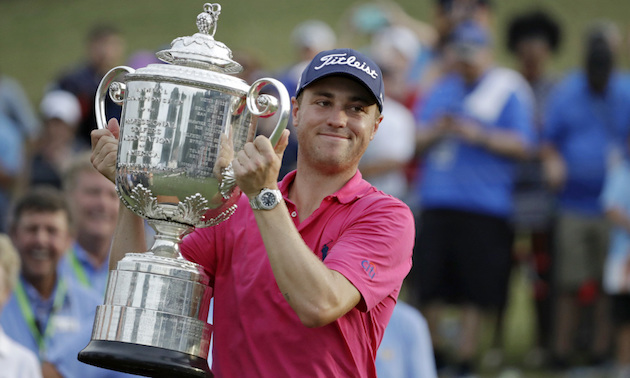 Justin Thomas shot a final-round 68 on Sunday to capture his first ever Major Championship at Quail Hollow Golf Club in Charlotte, North Carolina.  In the final Major of the year, the PGA Championship, Thomas rallied from two-strokes down on Sunday to grab the Wanamaker Trophy over Francesco Molinari and Patrick Reed.

The week didn’t start so hot for Thomas, as he shot an opening round 2-over 73.  American Kevin Kisner grabbed the early lead, by firing off back-to-back 67s to sit atop the leaderboard at 8-under par.  Thomas bounced back with a second round 66 to get into contention, and sat four strokes behind Kisner heading to the weekend.

Even with a 1-over 72 on Saturday, Kisner still held the 54-hole lead at 7-under par.  Thomas made a slight move in the right direction with a 2-under 69.  He was still two back at 5-under.

With only one Major Winner in the top-1o heading into the final round (Louis Oosthuizen), many picked Thomas to grab his first Major Title.  He got off to a slow start with a bogey at the brutal 1st hole, followed by a birdie at the 2nd and another bogey at the 3rd.  Birdies at the 7th and a 9th (by way of a 36 foot putt) had Thomas making the turn at 1-under for the round, and within striking distance.

On the back, Thomas continued to make his move.  He made an easy birdie at the 10th, and then chipped in for birdie at the 13th.  It just seemed to be his day.  In the final stretch of three holes, known as the “Green Mile,” Thomas made an incredible par save at the 16th.  On the par-3 17th, he hit one of the most clutch tee shots I have ever witnessed, and stuck it close on the extremely tough par-3.  He drained the birdie putt in the side door, and took a three shot lead.  Although he found the bunker off of the tee at the 18th, he was able to cruise to an easy bogey for the victory.

This is the fourth win this year for Thomas, and makes him almost a lock for player of the year.  At just 24 years old, Thomas will look to continue a great start to his career.  He is stupid long and has shown moments of brilliance on the greens.  He’s going to look to carry this momentum into the FedEx Cup playoffs, while chasing that $10 million payday.  For now though, he will be enjoying some adult beverages out of that trophy. 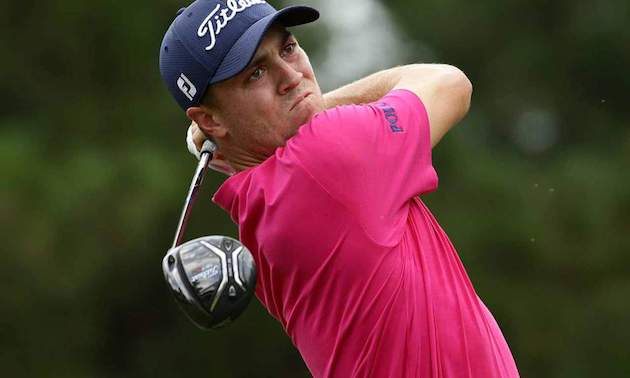