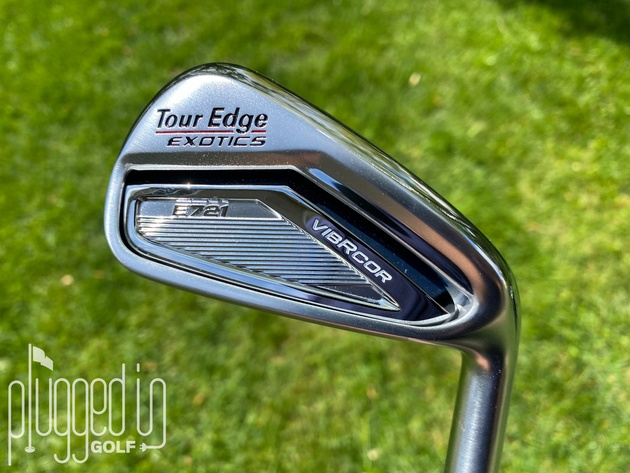 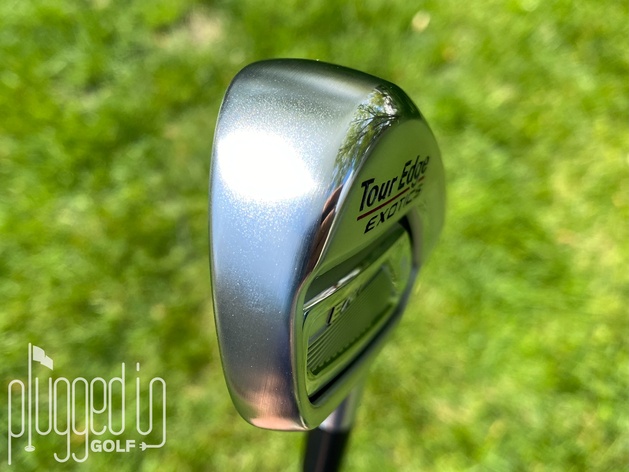 I recently reviewed the Tour Edge Exotics C721 irons [check it out HERE] and praised them for their category-defying combination of performance traits.  Today, I’m taking a look at the E721 irons.  In the current Tour Edge Exotics line, C stands for Competition, the model meant for better players.  E stands for Extreme, as in extreme distance and extreme forgiveness.  Are the E721 irons just another distance iron or something more?  Let’s find out. 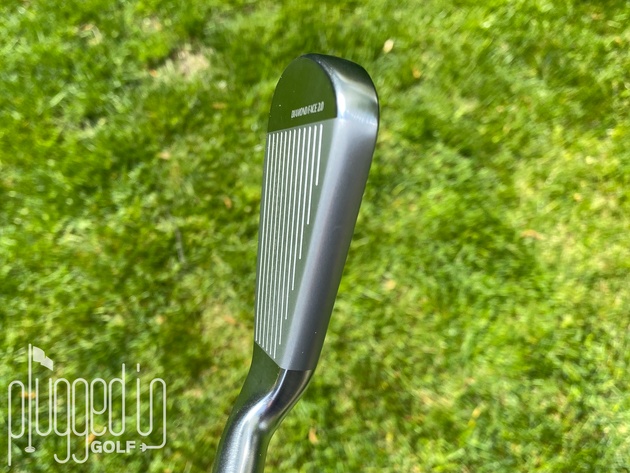 The Tour Edge Exotics E721 irons straddle that line between game improvement and super game improvement irons.  This set has a very thick top line and a noticeable amount of offset.  The sole is also substantial, though not as wide a some hybrid-style irons. 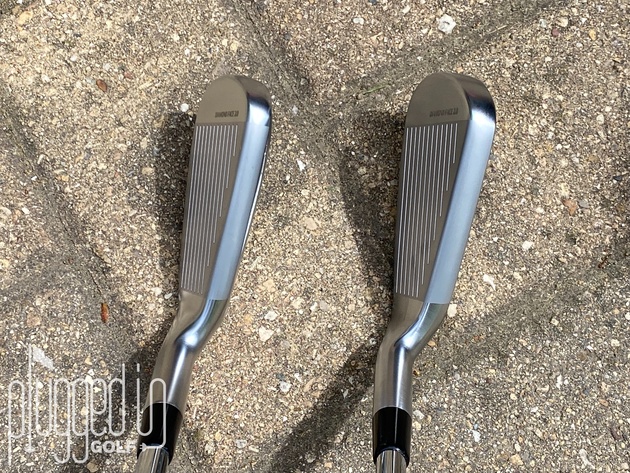 Compared to the C721 irons, the E721 is bigger in every way.  The top line and sole are thicker, and there is more offset.  Also, the face shape of the E721 is rounder which makes the face look larger.

In the bag, the two irons look nearly identical.  Both eschew bright colors for silver in a variety of tones and textures.  If you look closely, you can spot the E721’s “undercut” design, but the difference is subtle. 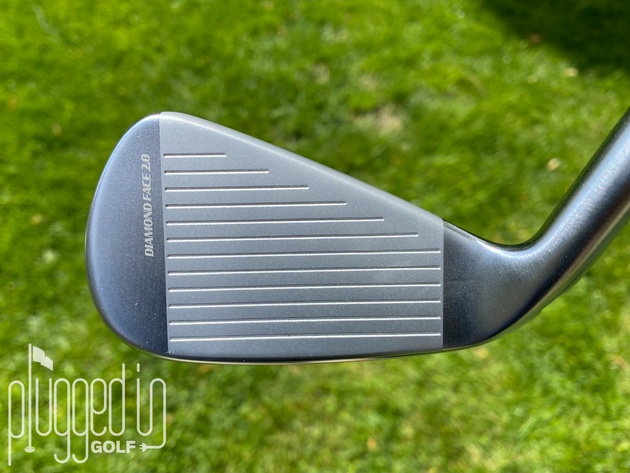 Just as in the C721 irons, Tour Edge’s VIBRCOR technology does an amazing job of making a modern iron feel very solid and traditional.  Impact with the E721 is much quieter than you would expect, making the same low-pitched “snap” as the C721.

The one difference that I noted between the C721 and the E721 irons is that there is a slight change in feel between the long and short irons in the E721 set.  With the C721, the irons feel the same from top to bottom.  When hit well, the E721 long irons have this extra level of “holy **** that ball might not be round anymore.” 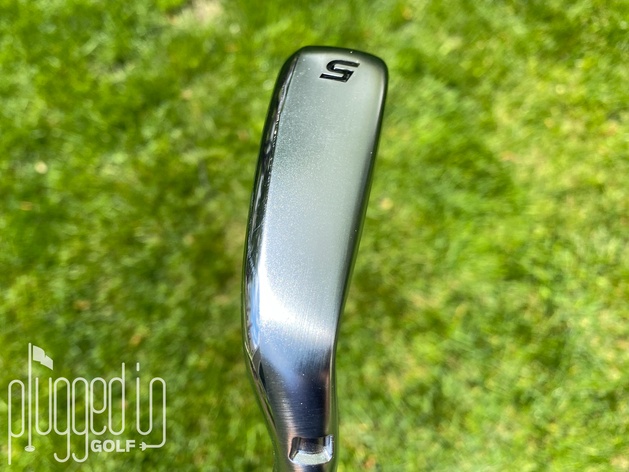 After testing the C721 irons and taking a look at the specs of both sets, I wasn’t sure what to expect from the E721.  The C721 impressed me for the way that it put playable spin into an iron that was still very long and forgiving.  I wanted to expect the same from the E721, but the “Power Lofted” specs – roughly two degrees stronger throughout the set – made me skeptical.  It turns out that at any loft, Tour Edge Exotics can make an iron that’s both long and playable.

The speed and distance are what first stood out about the E721 irons, so we’ll start there.  This set has elite ball speed and high end forgiveness that keeps your ball speed high even on mishits.  Those are the key ingredients to the E721’s extreme distance.  The E721 8-iron produced the same ball speed as the C721 7-iron, and was 25 yards longer than my gamers.

As with the C721, what impressed me even more was the spin and ball flight of the E721 irons.  This set features a 360-degree undercut design which allows the face to flex more, producing higher launching shots.  You can see this feature at work both on the launch monitor and on the course – “towering” is its stock shot.  Pair that high launch with slightly above average spin and you get shots that not only carry forever, they can also hold the green when they finally come down. 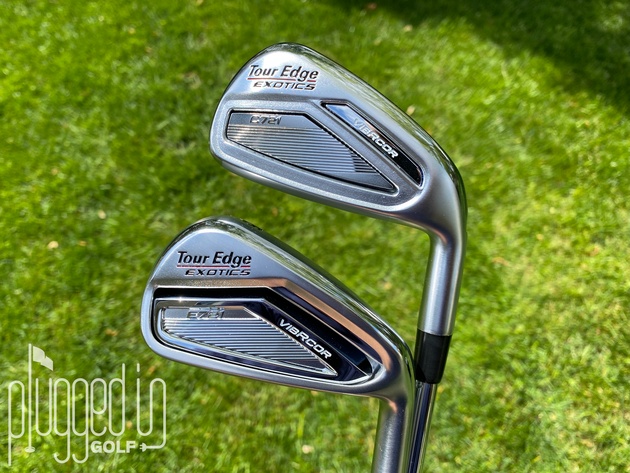 The above average launch and spin help to negate some of the typical concerns about strong lofted irons, but players should still be aware of their distance gaps and set make up.  For me, the 21.5 degree 5I was the lowest-lofted iron I could consider carrying, and even that was borderline.  When well hit, it went a mile, but, as a low launching player, I hit a fair number of shots that weren’t much longer than the 6I.  Make sure to work with your fitter to create a proper set configuration for your game.

Speaking of fitting, Tour Edge Exotics continues to offer a great array of stock shafts with recommendations based on your swing speed.  For the slower swinger, they suggest the KBS TGI Tour Graphite.  The mid and high speed swingers can choose between the Project X HZRDUS Smoke Black RDX in graphite or the True Temper Elevate 95 in steel.  Each of these shafts is offered in multiple flexes for a precise fit. 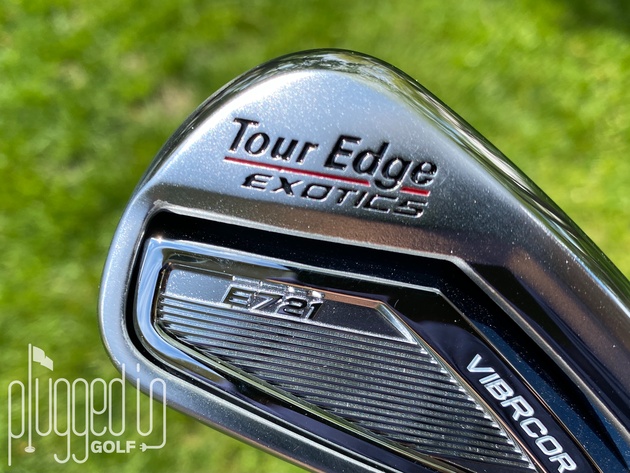 If the C721 irons aren’t long or forgiving enough for you, take things up another notch with the Tour Edge Exotics E721 irons.  This set feels outstanding at impact, but more importantly, they perform.  Just get ready to start hitting shorter irons into greens. 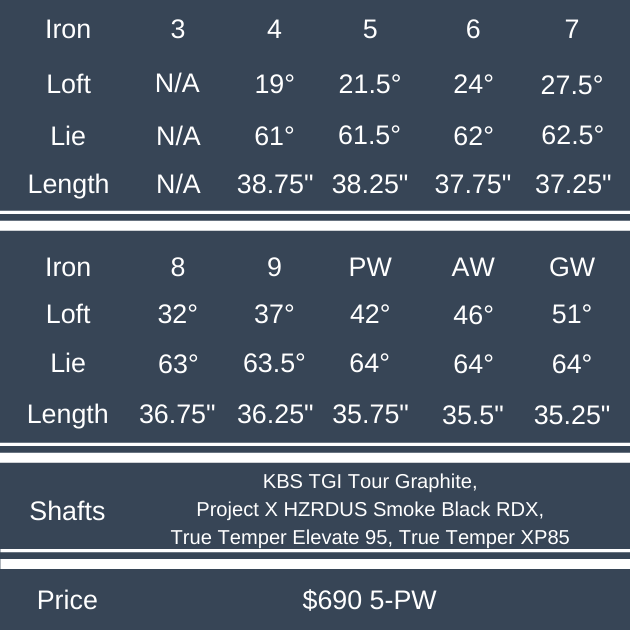