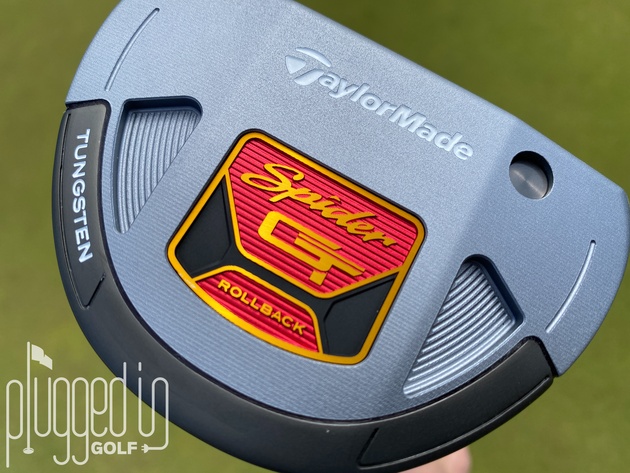 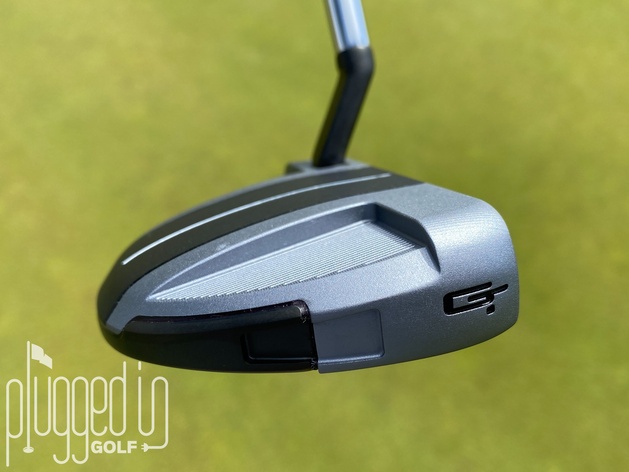 The Spider GT takes the stability that is synonymous with the Spider franchise and puts it into a sleeker head shape.  Its 2022 classmate the Spider GT Rollback goes a step further by using a classic mid-mallet shape.  Can modern performance fit into a shape this traditional?  I tested one to find out. 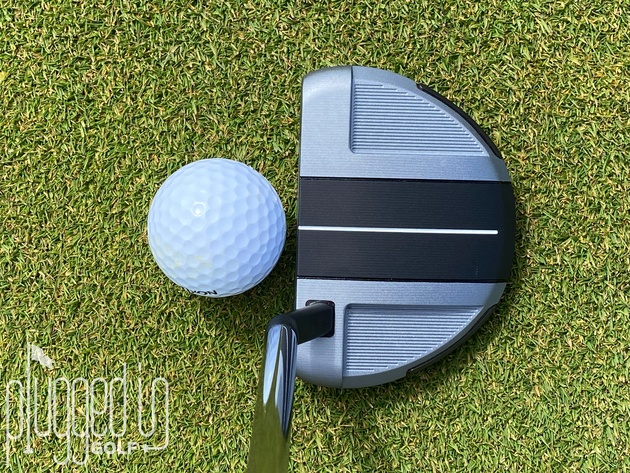 The TaylorMade Spider GT Rollback has an address look that blends a traditional shape with modern alignment concepts.  Taking it out for the first time, it was more compact than I expected.  I found the classic mid mallet shape to be very comfortable behind the ball.  On the modern side, the Spider GT Rollback uses a thick black stripe to frame the ball.  Players can choose to focus on that larger stripe or the thin white sightline for aiming.  The areas beyond the stripe being lowered further focuses your eye on what matters. 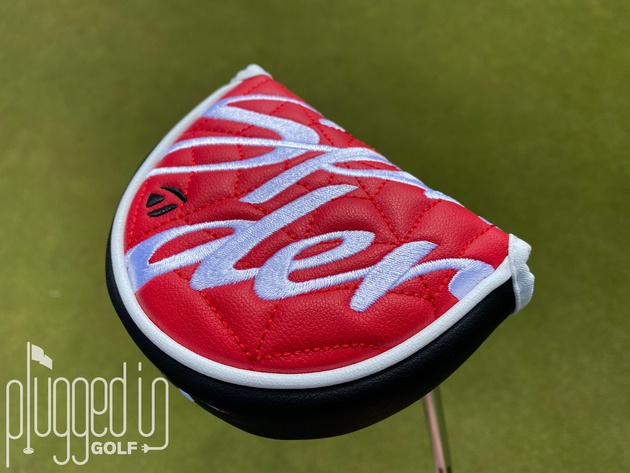 TaylorMade offers the Spider GT Rollback in two different looks.  In addition to the one shown here, they offer a Rollback that’s entirely silver with three thin, black sightlines.  As someone who doesn’t typically use sightlines, I prefer the thick black stripe because I feel like it frees up my stroke.

As with the Spider GT, the Spider GT Rollback has a great stock headcover.  The red/white/black color scheme is timeless and eye-catching.  Additionally, the magnetic closure is a huge plus over velcro.

My favorite thing about the headcover is the red-on-red (black-on-black on the bottom) spiderweb stitching.  It’s a small detail that they easily could have left out, but it really makes the cover. 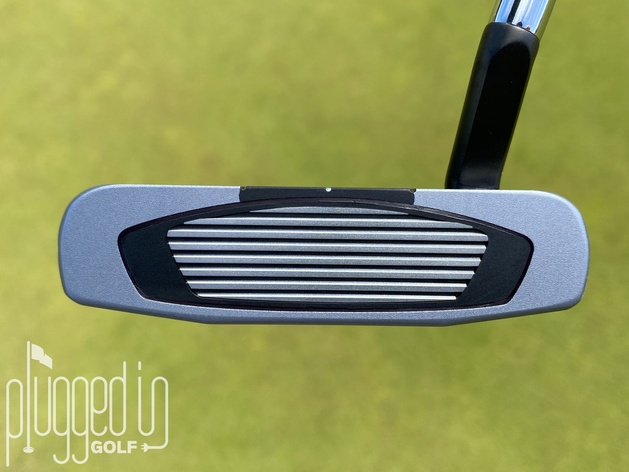 The Spider GT Rollback uses the same Pure Roll² insert as the Spider GT [review HERE], giving both putters nearly identical feel.  With a urethane-covered ball, the Rollback has a very soft impact feel.  This is complemented by a fairly quiet “thud” when struck well.  I particularly like that this putter is able to feel soft without getting mushy.  Each putt felt very solid behind the pillowy impact.

Also like the Spider GT, the Rollback provides excellent feedback on strike location.  The feel is soft across the face, but your hands will know is the ball was struck toward the heel or toe.  In contrast, the sound will change quickly when you leave the center of the face.  Mishits produce a slightly louder “tock.” 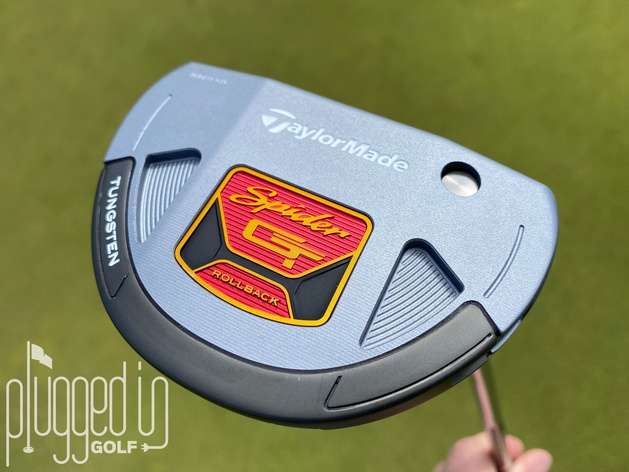 After reviewing the Spider GT, my standards for forgiveness were set very high.  However, knowing that the Spider GT Rollback had a more traditional shape, I wasn’t expecting quite that level of stability.  The results from my testing showed that the Rollback sacrifices almost nothing.

As with the Spider GT, the Rollback’s smash factor was almost identical when comparing pure strikes to toe or heel shots.  The reason that the Spider GT Rollback is able to forgive mishits is its multi-material construction.  Most important is the 80 gram tungsten bar the wraps around the back and sides of the putter.  This heavy metal is offset with a lightweight aluminum cap. 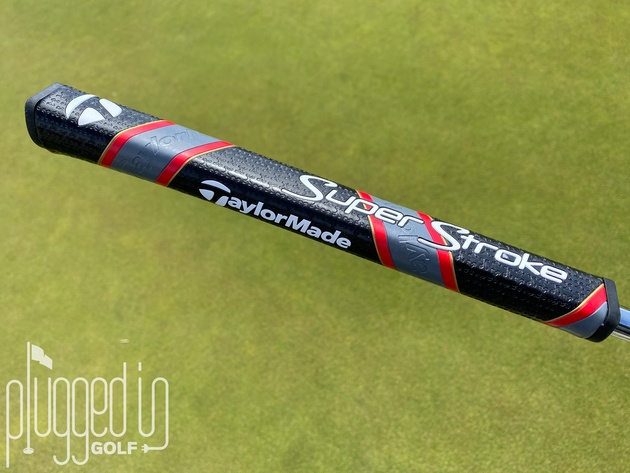 Just like the Spider GT, the Rollback is available with two different hosels.  I tested the slant neck and found it to be a good fit for my moderate arc stroke.  This hosel produces 21 degrees of toe hang, per TaylorMade.  The other option is a single bend shaft which makes the putter face balanced.  This option will work for golfers making a straight back, straight through stroke.  Unlike the Spider GT, the Rollback is not available in the MySpider custom program, as of the of publication.

Finally, the Spider GT Rollback uses TaylorMade’s new Pure Roll² face insert.  TaylorMade states that the aluminum beams are set at a 45° angle to improve topspin across the face.  Testing on my GCQuad showed that this does create more top spin (or at least reduced backspin) compared to traditional milled faces.  Also, the range of skid for each putt is much tighter than with traditional putters. 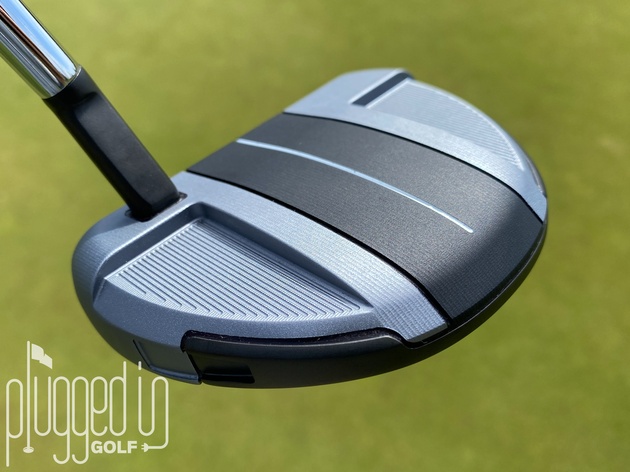 Thanks to a clever use of different metals, TaylorMade has crammed all of the Spider’s famed stability into a traditional mid-mallet shape.  The Spider GT Rollback allows golfers to have a comfortable address look and soft feel without giving up anything in terms of forgiveness or improved roll.