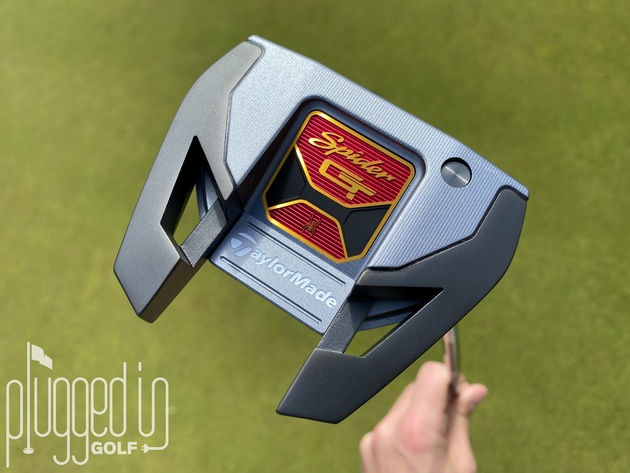 The TaylorMade Spider GT putter puts the Spider’s well-known forgiveness into a sleeker head shape.  Loads of customization options for both looks and performance. 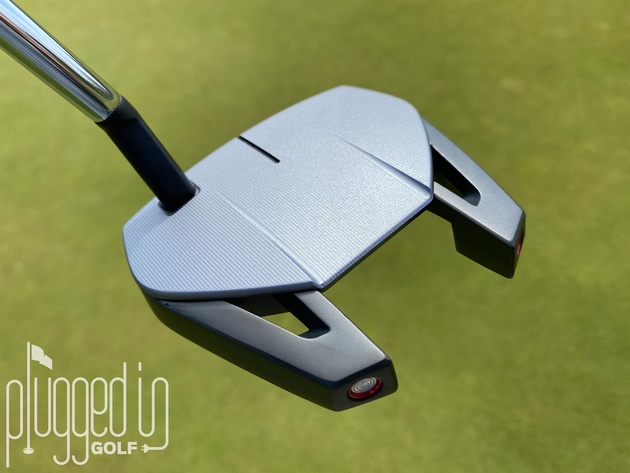 The TaylorMade Stealth driver [review HERE] has, without question, been the most talked-about golf club of 2022.  That doesn’t mean TaylorMade has done all of their innovating on the tee box.  On the green, they’ve taken their Tour-proven Spider design and given it a major facelift.  I tested the new Spider GT to see if the Spider’s renowned function could exist in this new form. 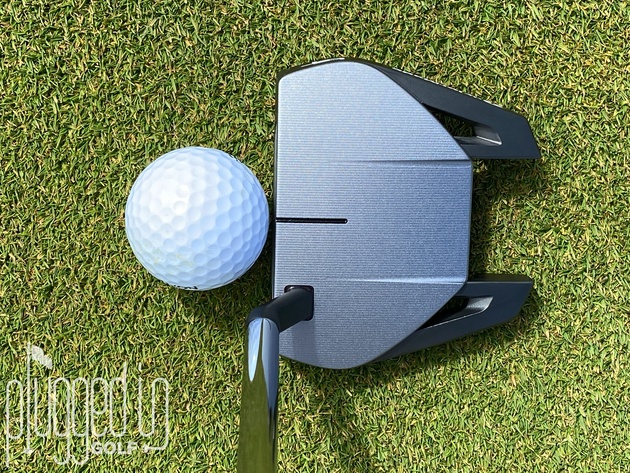 While the TaylorMade Spider GT putter is, quite clearly, a modern mallet, it diverts from the typical Spider shape.  Most notable to me is the fact that the “wings” don’t angle away from the putter’s centerline but rather slope in.  This creates a more streamlined look than most Spiders.

The Spider GT also looks smaller than it is because of the silver plate.  Your eye only focuses on that, making the black “wings” invisible.  Overall, this is a modern mallet that looks fairly compact and traditional.

Additionally, the Spider GT takes an unusual approach to alignment.  Where most modern mallets have loads of long lines, the Spider GT has one short sightline.  This is complemented by the side bars and the shape of the top plate, which subtly frame the ball.  I think this short line is a smart choice for the Spider GT as it’s a perfect fit for the player who wants modern performance but a slightly more traditional look.

Want something even more traditional?  Check out the Spider GT Rollback HERE 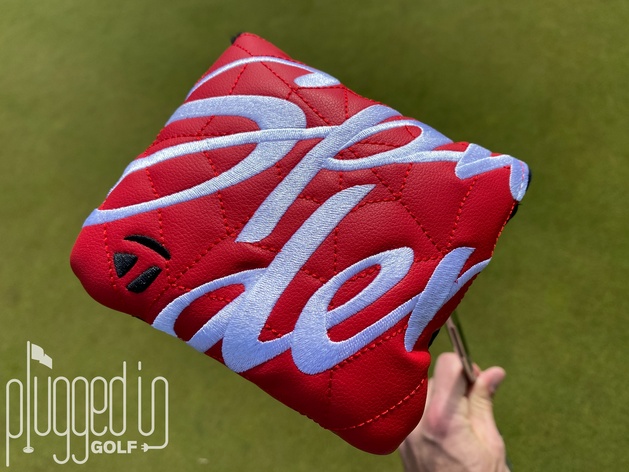 TaylorMade is offering the Spider GT in a wide array of colors.  The stock Spider GT is available in red, black, and silver, as well as a white/blue women’s model.  Through the MySpider GT program, you can get one of twelve head colors in addition to changing the colors of the badging, weights, face, and more.  You can even add text to the sole.  Friendly advice: don’t start playing with the customizer unless you have a lot of time to kill.

Finally, I want to applaud TaylorMade for the excellent stock headcover.  The magnetic closure is an automatic plus.  The bold red and white color combo is balanced with a simple design. 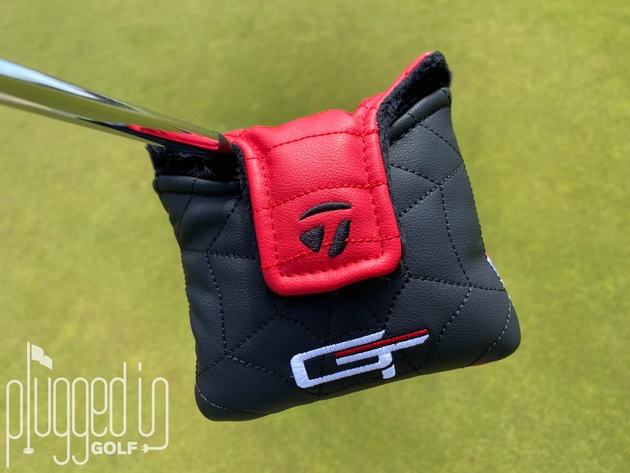 My favorite thing about the headcover is the red-on-red (black-on-black on the bottom) spiderweb stitching.  It’s a small detail that they easily could have left out, but it really makes the cover. 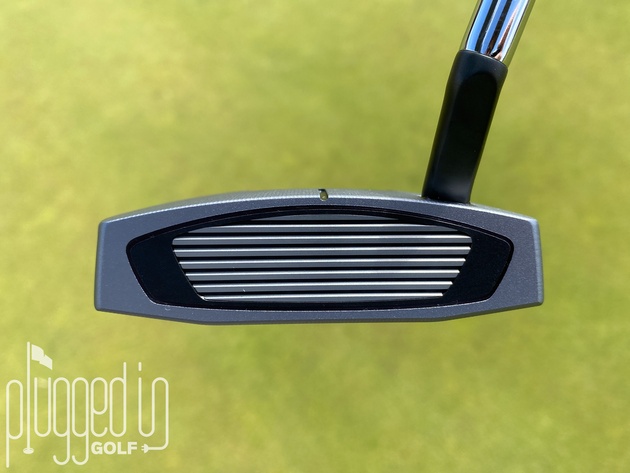 The Taylormade Spider GT putter has a soft, premium feel.  Its Pure Roll² insert is made of urethane with aluminum beams.  The combination allows it to feel very soft without being mushy; the aluminum retains a solid feeling, especially on longer putts.  This feel is complemented by a fairly quiet “thud” on well struck putts.

Despite being a putter built for stability, the feedback is excellent.  You won’t feel the putter twisting on mishits, but your hands will clearly notice them.  This is enhanced further by the sound.  Only perfect strikes create a “thud”; mishits produce a slightly louder “tock.” 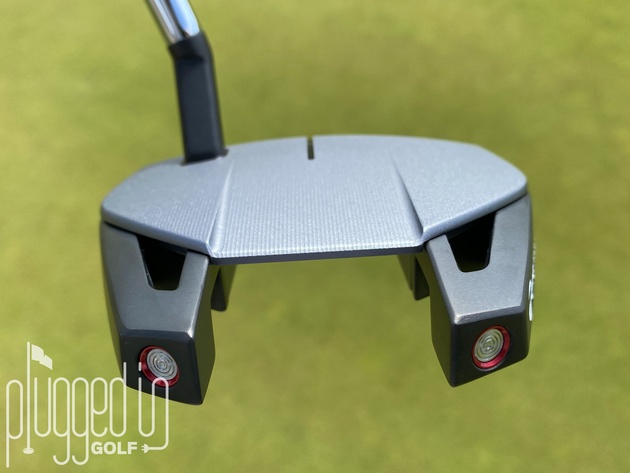 TaylorMade has had a two decade run of success with Spider because of one word: stability.  Substitute “forgiveness” or “consistency” if you prefer, but the Spider family has been loved because it takes mishit putts and makes them perform like pure strikes.  That continues to be its hallmark with Spider GT.

The Spider GT is stable because of its multi-material construction.  It uses a lightweight, aluminum top plate flanked by steel side weights to push 82% of the weight to the perimeter.  This is why the putter barely budges when you strike a putt on the heel or toe.  Testing on Foresight GCQuad shows that the smash factor is nearly the same whether you strike a putt pure or on the toe or heel. 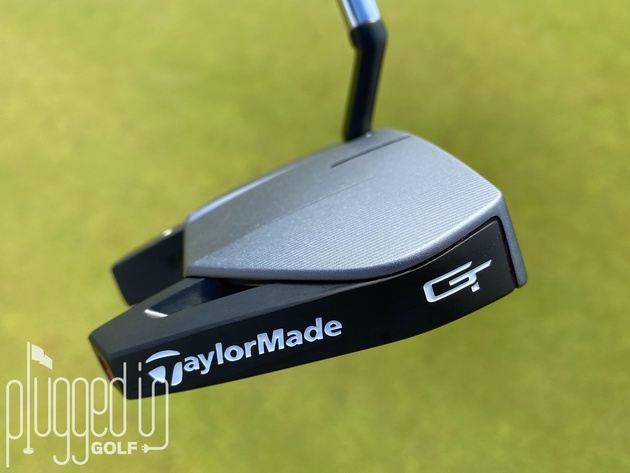 There are two stock hosel configurations for the Spider GT.  I tested the standard Spider GT which comes with a short slant neck that creates 21 degrees of toe hang, per TaylorMade.  This was a comfortable fit for my moderate arc putting stroke.  There is also a Spider GT Single Bend which is face balanced for the straight back, straight through player.  Through the aforementioned MySpider GT program, you can access two additional options: an L-neck (plumbers neck) or a flow neck. 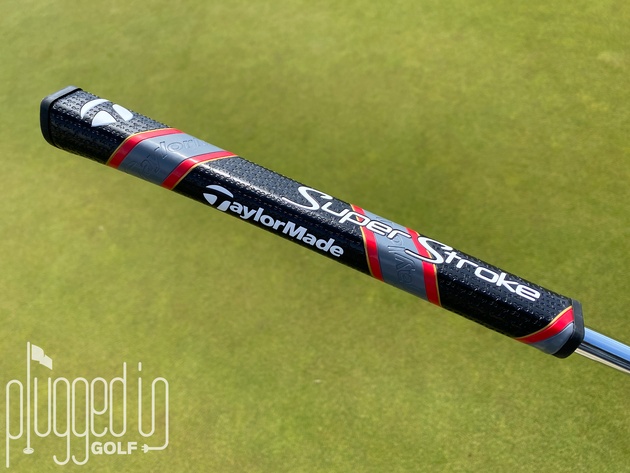 Finally, the Spider GT has a new face insert called Pure Roll².  TaylorMade states that the aluminum beams are set at a 45° angle to improve topspin across the face.  Testing on my GCQuad showed that the Spider GT does, indeed, create more top spin (or at least reduced backspin) compared to traditional milled faces.  Additionally, the range of skid for each putt is much tighter than with traditional putters. 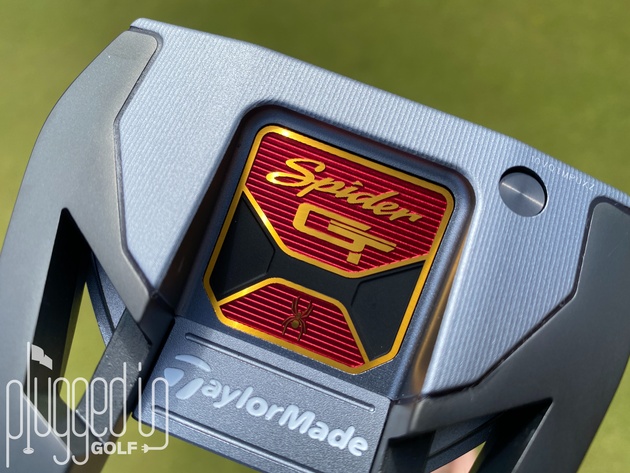 The TaylorMade Spider GT putter has a slick new look that it backs up with tremendous performance.  Looking only at the numbers, it was difficult to distinguish well-struck putts from ugly mishits.  That level of forgiveness can mean fewer three putts and more birdies.