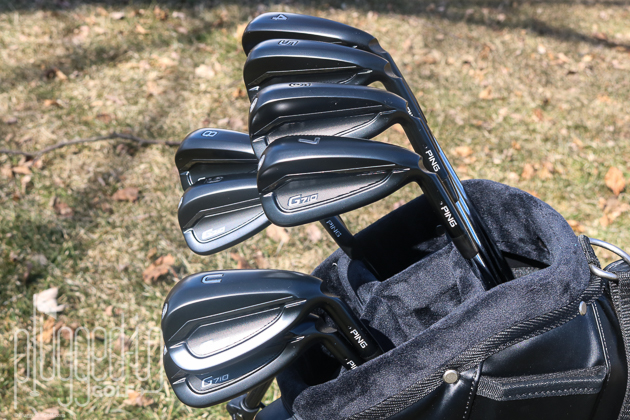 The PING G710 irons are long and easy to hit.  Some of slickest looking SGI irons available.  Much improved sound and feel. 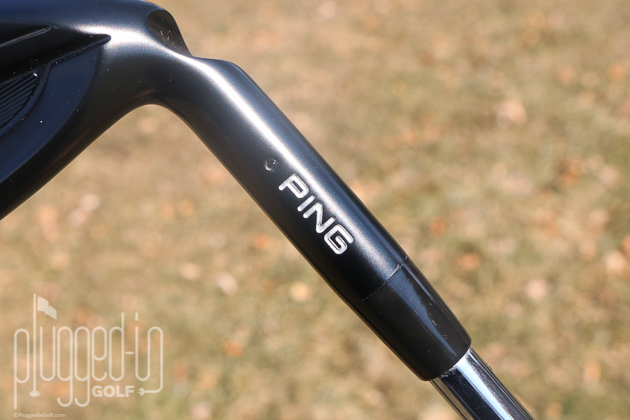 PING is best known for the remarkable engineering that goes into their golf clubs, but the G710 irons show that they know how to make a club good looking, too.  While packing in more distance and forgiveness than any other PING iron, the company also upgraded the subjective elements so that players will not only benefit from having these in the bag, they’ll want to. 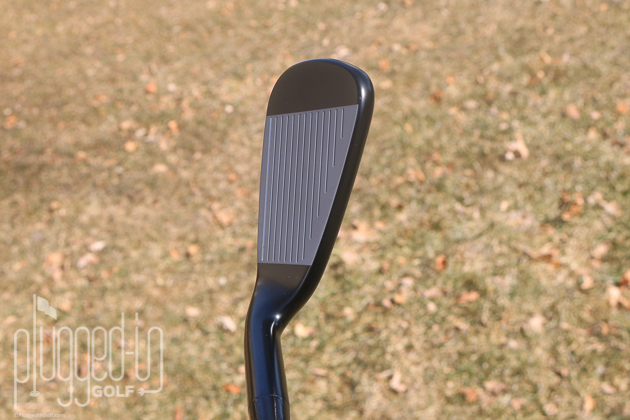 Any discussion of the PING G710’s looks has to start with the finish.  The shiny Hydropearl Stealth finish is an eye catcher in the bag.  This sleek color choice is complemented by the minimalist branding: “G710” in the cavity, “PING” on the hosel, and the iron number on the sole.  That’s it.  This is a master class in giving bag appeal to a super game improvement iron. 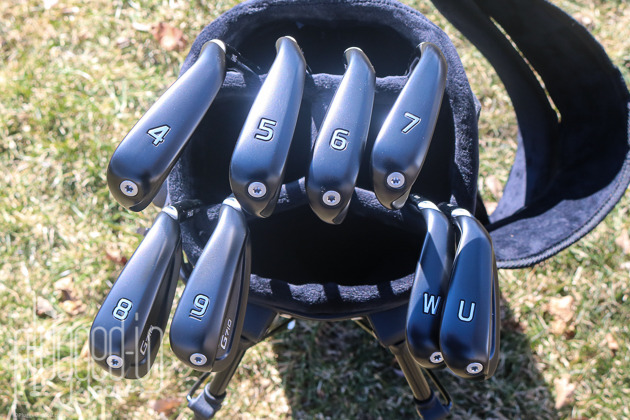 At address, the dark finish does its job by making the G710 irons look slim.  The top line is thinner than expected and well shaped.  This is a long club from heel to toe, but the contrast in the face makes it appear smaller by focusing your eye only on the grooved section.  There is a considerable amount of offset. 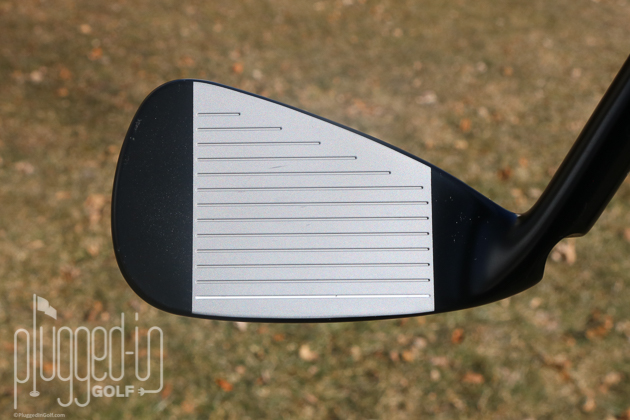 If the G700 irons had a shortcoming, it was their sound and feel.  They were a little loud and the sound was a bit unorthodox.  With the G710, PING has upgraded the impact sensations immensely.

Contact produces a solid feel that belies the thin face.  The sound is a bass-y “click” that’s rather quiet, especially for an SGI iron.

The one carryover from the G700 is the limited feedback.  With a MOI this high, it’s hard to locate impact precisely.  I could distinguish flush shots from big misses, but the in between shots were hard to pinpoint. 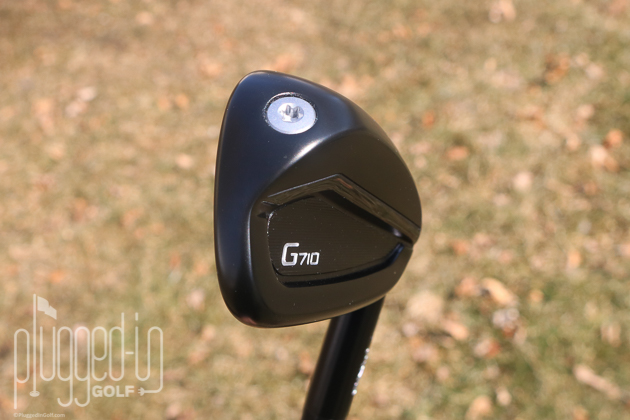 One of the things that PING is best known for is making easy to hit irons, so when they say that the G710 is their longest and most forgiving, that’s saying a lot.  The MOI is 5% higher than in the G700 irons (review HERE) thanks to the high density tungsten weights in the heel and toe.

In my testing, I saw exactly what I expected from the G710 irons: long shots landing in a tight circle.  These irons have plenty of ball speed, launch easily, and carry adequate spin to hold a green.  If you’re tired of distance irons that do nothing but fire knee-high rockets and knuckleballs, the G710 irons are the antidote.  I picked up a club of distance but maintained my landing angle.

More than any other club in the set, the 4-iron really impressed me.  As a low launching player, I struggle to get enough distance and consistency out of long irons.  With the G710 4I, the ball got up into a playable window, carried a long way, and landed as softly as I can reasonably expect. 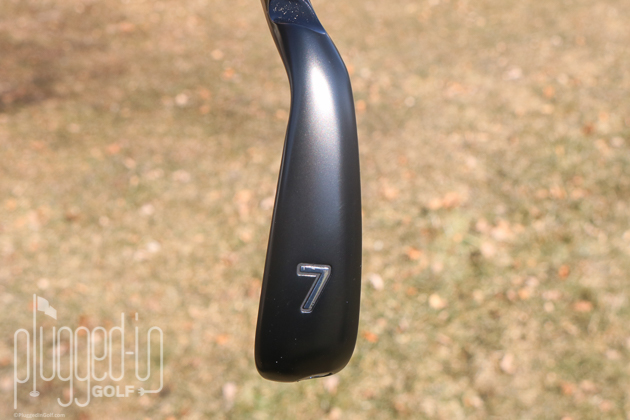 As has become their norm, PING is offering a boatload of shaft options standard on the G710.  The new PING Alta Distanza is their lightest (43 grams), highest launching iron shaft yet.  In addition to two other proprietary PING shafts, there are options from Nippon, KBS, True Temper, UST, and Project X.

Finally, every set of PING G710 irons comes with Arccos Caddie Smart Grips.  The sensor is built directly into the grip of the irons so that you can track each shot.  PING also provides each customer with one free year of Arccos Caddie.  Additionally, if you order six or more irons, PING includes eight additional Arccos sensors so you can capture data from every club in your bag. 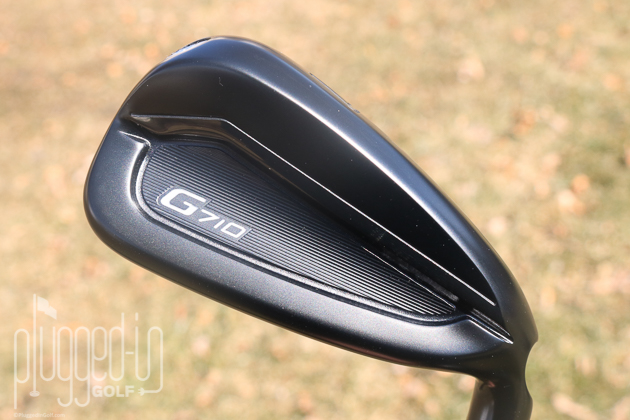 For many golfers, bagging the forgiving irons that they need is done reluctantly.  With the sharp looks and improved feel of the PING G710, that decision will be much easier.  Get to your local PING fitter to try a set for yourself. 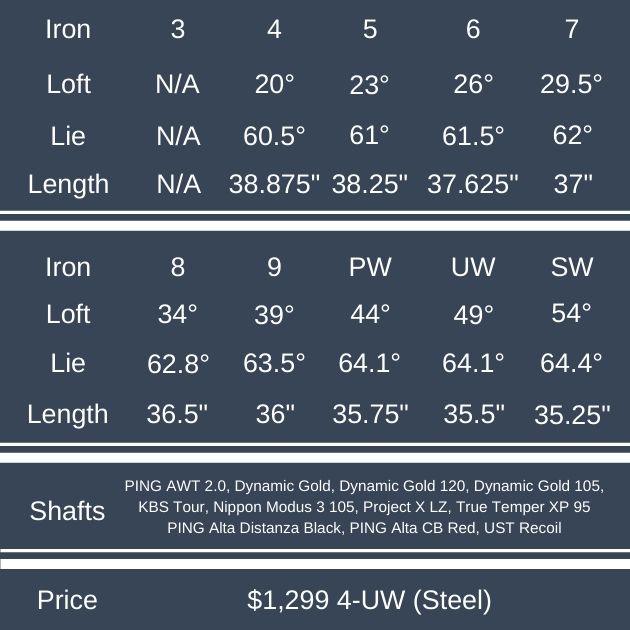