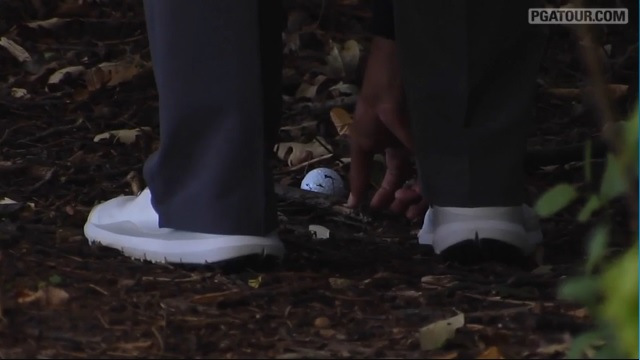 The hot subject on the PGA Tour right now is spectators calling in rules infractions during tournaments.  The most recent example came at the BMW Championship when Tiger Woods removed a stick from behind his ball and the ball appeared to move into a new position.  Some may argue it moved, some may argue it only oscillated.  The point is, a freelance videographer caught it on film and the footage found its way to PGA Tour officials who ruled the ball moved and assessed Woods a two-stroke penalty.  Had this camera not caught Woods, nothing would have happened and Tiger would have been on his merry way.  Regardless of if you agree with the ruling, the concern is that people that are not Rules Officials are able to spot an infraction and report it.  One might argue (perhaps quite strongly) that they are interfering with a person’s livelihood and their ability to put food on their family’s table.

I can’t tell you that I think it’s fair for someone who is not an official to the event to be able to report rules infractions.  There are a million sports comparisons you can make, but I will use baseball: it would be the same as someone watching a baseball game on TV and calling in to MLB to report a ball hit over the foul ball was actually foul, and not a home run as ruled.  Then MLB would call into the officials at the game and tell them to take the run away.  If you think that makes sense, then I don’t know if sports are for you.  Officials and referees are in the games for a reason.  The ruling of the contest should be left up to the officials and not the armchair warriors.

The other argument is that there is a clear unbalance in TV coverage.  Naturally, a person like Tiger Woods is going to get penalized more by the armchair warriors because he simply has more air time.  For all we know, Mr. 19 Strokes (Kevin Na) could have had twelve infractions in a round, but he doesn’t get the same coverage that Tiger gets.  This makes it more difficult for me to catch him breaking the rules between handfuls of Cheetos while I watch on TV.  Face it, Tiger is extremely high profile and is going to get lots of TV coverage no matter how well he’s playing.  Usually this means there are more people out to get you, so it shouldn’t be a surprise that if spectators are allowed to penalize players from their couches, they are going to go after Tiger Woods whenever they have the chance.

“It feels awkward when it happens,” said Finchem about the Woods incident, which only came to light because a PGA Tour camera crew was filming the golfer. “On the other hand, I hate to say it’s part of the tradition of the game because actually you can’t really argue that because it’s changed with the degree of television we have. I think we need to do some more thinking about it. I think people in the game need to think about it.”

Below are two differing views from Brandt Snedeker and Peter Jacobsen.

“At some point you have to draw a line and stop it,” PGA Tour player Brandt Snedeker said. “I don’t know where that is … I don’t think fans should be able to call in and dictate the outcome of a tournament.”

“When we have fans calling in after watching it on TV, it strengthens the rules of the game and strengthens how good we have to be,” he said. “Specifically with the Tiger situation last week, when you’re moving a twig, you’re not looking at your ball. So when Tiger says he didn’t see the ball move, I get that. He was standing on top of it looking down, probably saw it in his peripheral vision, didn’t see it move. I don’t mind people calling it in. It’s unfair for Tiger because Tiger’s got a camera on him everywhere he goes. … But it only keeps us sharp.”

I have to say that I agree with Brandt Snedeker.  Ultimately, it’s not my job to be a Rules Official so a player shouldn’t have to abide by my rules.  I don’t care what the “rules of golf” say. If the PGA Tour doesn’t have enough personnel to properly officiate and cover their players, maybe they need to re-evaluate their internal processes.  Thankfully, that appears to be what Tim Finchem is doing.  He seems to understand that this current situation is extremely unfair and he’s looking for a better way to address it.  The only thing I disagree with Finchem on is how difficult he believes the situation is.  I think it’s pretty simple.  If you think the fans should be able to call in rules infractions, put a time limit on it and let’s move on.  Of course, then you would have to give each player in the field equal TV time which isn’t going to happen.  If you don’t think the fans should be able to call in infractions, put the new rule in place and let’s move forward already.

To read an article on Woods’ response, click HERE.