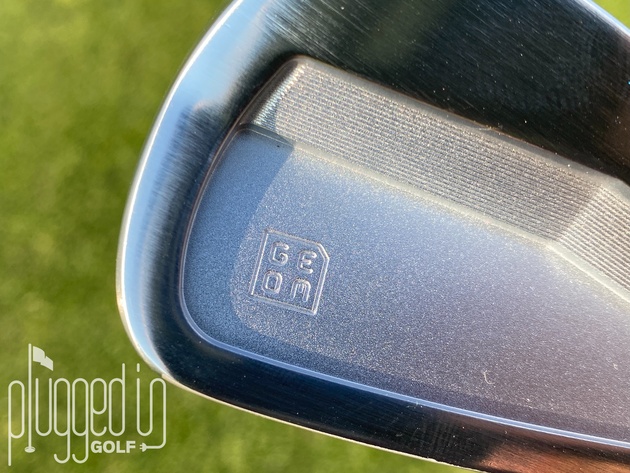 The Moe irons from GEOM Golf combine stellar looks and feel with outstanding, consistent performance.  Available as a four club half set. 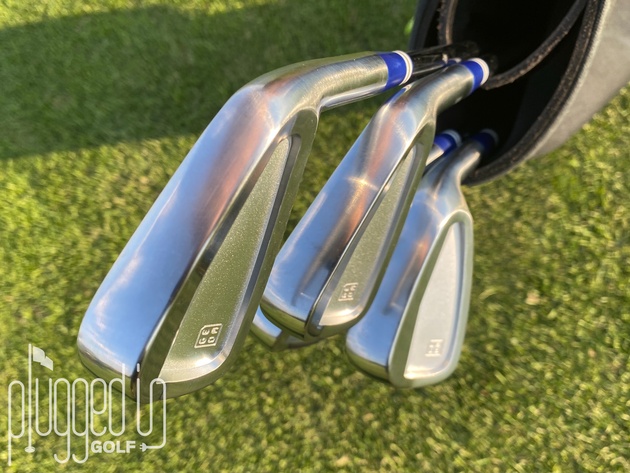 I’ve written numerous times about the benefits of carrying fewer clubs [find one example HERE].  And while almost everyone I play with has expressed interest in my half set, the temptation to buy “all the clubs” is too great for most people.

Enter GEOM Golf’s Moe – an iron set sold exclusively in a 1/2 set configuration.  If you want the full story of Moe, you can get it from the creator HERE, but if you want the details on how these irons perform and whether you should be building a minimalist set around them, read on.

Before I jump in, I want to thank Nippon for providing the Modus 115 shafts [review HERE] and Club Champion for building the clubs to perfection. 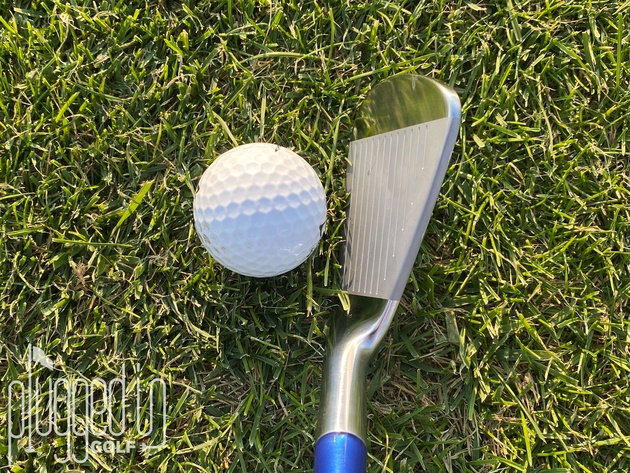 Pictures do no justice to how clean the GEM Golf Moe iron is.  I’d studied every available snapshot of these irons before I received mine, but I was still blown away by the near-total lack of branding, engraving, or marking of any kind.  In the toe of the cavity there’s a small “GEOM” logo and that’s it.  The sole is completely clean, not even a loft stamping. 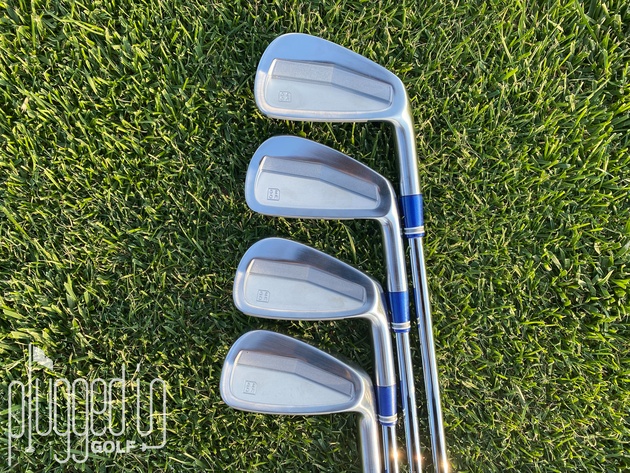 For some of us (boring, slightly OCD people like me), the clean look with a satin finish is exactly where we want to be.  However, a quick look at GEOM’s Instagram story [check it out HERE] will let you know that the highest purpose of these irons is to be a blank page for your creativity.  Players are taking the Moe – particularly the raw version – and creating unbelievable one-off masterpieces.  With custom paint fill, stampings, ferrules, and patinas, you can make an iron that’s unlike anyone else’s. 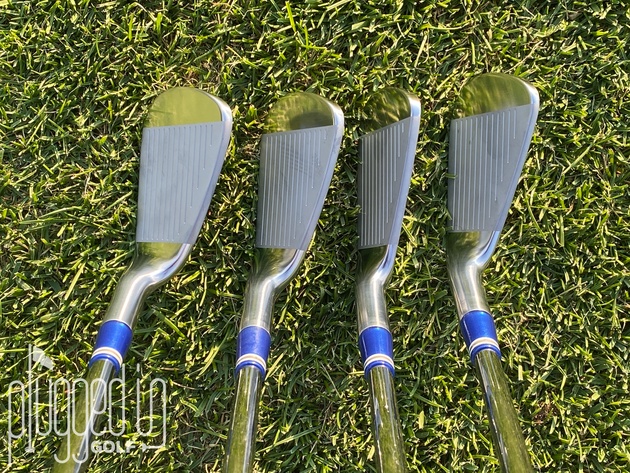 Getting back to the basics, the Moe is a traditional players cavity back.  There’s very little offset and the top line, which GEOM calls “moderate,” is thin enough to please all but the most ardent blade snobs.  These irons are compact from heel to their rounded toe, with just enough face around the ball to give you full confidence. 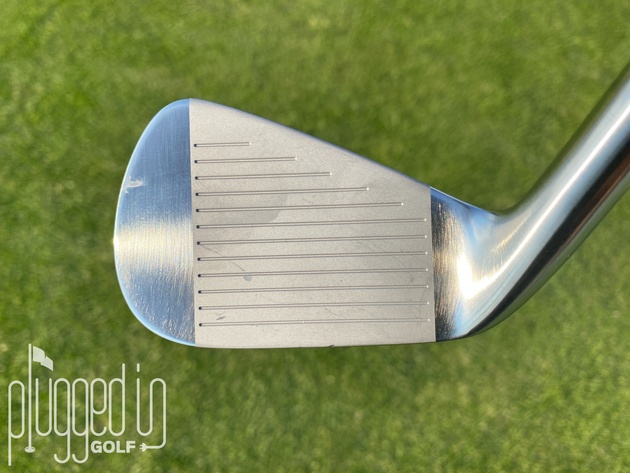 The GEOM Golf Moe iron slices through the air like a scythe, but it hits like Thor’s hammer.  I’ve hit dozens upon dozens of forged irons, but I can’t recall anything that hits with the weight of Moe.  Some of my mishits with Moe felt more solid than pure strikes with other irons. 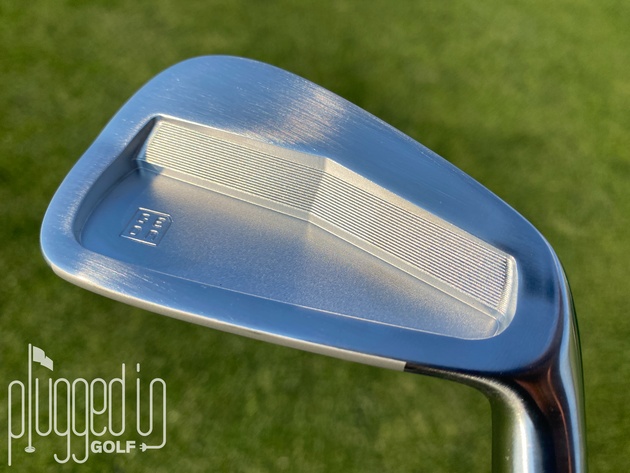 Don’t let my focus on weight and power allow you to forget that Moe is forged from 1020 carbon steel, so impact has that forged softness, too.  It’s Mjolnir with manners.

Forged carbon steel also means superior feedback.  If you’re paying any attention at all, you’ll know with precision how you struck each shot.  This kind of clear feedback is a cornerstone of improving as a ball striker. 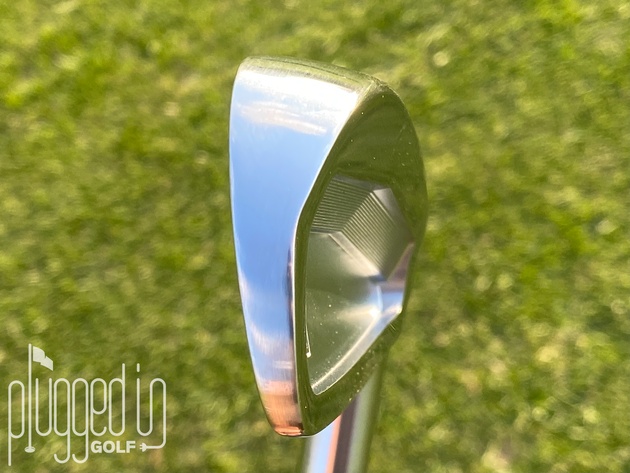 After very little range time, I knew that I was falling for the Moe irons, so I ran to the launch monitor to see if the numbers would provide a splash of cold water.  They did not.  Despite being small and having no “technology,” Moe produces high ball speed and consistent yardages.  What really impressed me was the way it dealt with thin strikes.  You can catch the ball a groove or two low and still get your full distance on a playable trajectory.

Now, let me be clear: this is not an SGI iron, and it’s not built for the high handicapper.  Compared to a much larger, hollow body, multi-material, thin faced iron, Moe is probably going to be shorter and it will be more punishing on mishits.  My comments are comparing Moe to other players irons, those of a similar size and construction.  In that category, Moe is outstanding. 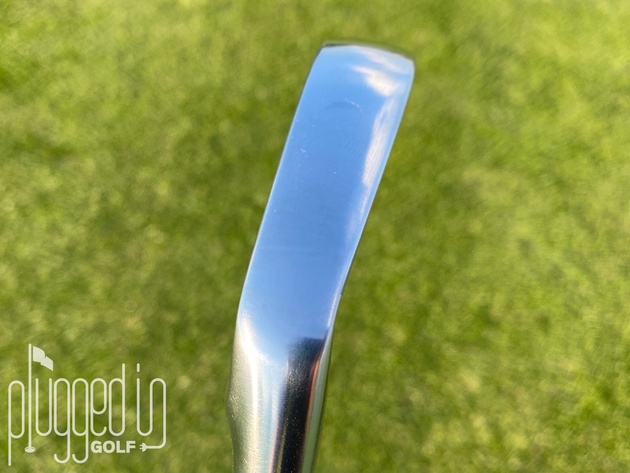 Within “only” four clubs in the half set, Moe not only allows for shotmaking, it demands it.  And GEOM puts that right into the description.  These irons are named for arguably the greatest ball-striker ever.  If you’re not interested shaping shots, hitting “in between” yardages, and controlling your trajectory, Moe may not be for you.

For me, the Moe irons bring out the joy of golf.  I like choking down or taking something off to hit a shorter yardage.  I like having to lean into the shot to squeeze out those last couple paces.  And I enjoy hitting cuts and fades at different heights.  Moe allows and enhances all that creativity.

To close, I want to mention one of my other favorite things about the Moe irons: the mental edge they give me over other golfers.  The look on the face of a golfer when they ask, “What’d you hit?” and you shrug while pointing Moe’s blank sole at them is priceless. 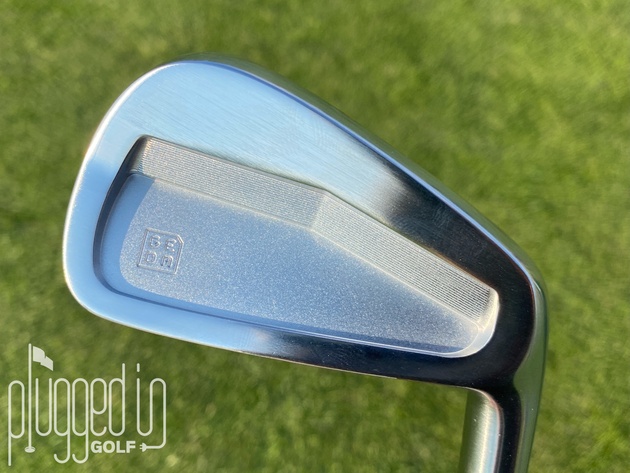 If it’s not evident, I love the GEOM Golf Moe irons.  They’ve been in my bag [full WITB HERE] since they arrived because they are everything I want in an iron – beauty, exquisite feel, performance, consistency.  Moe isn’t for everyone – some people are committed to carrying 14 clubs – but if you hear Moe speaking to you, take the plunge.  You won’t regret it. 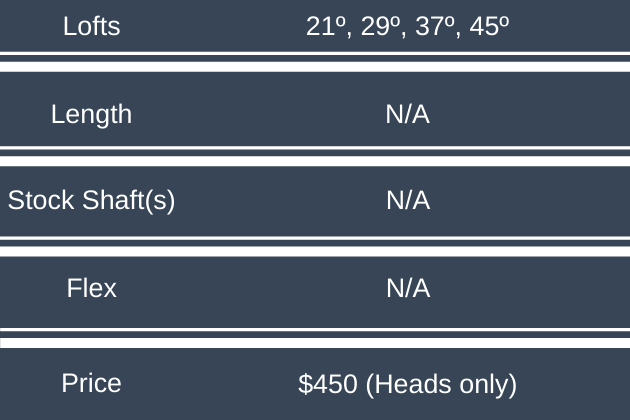