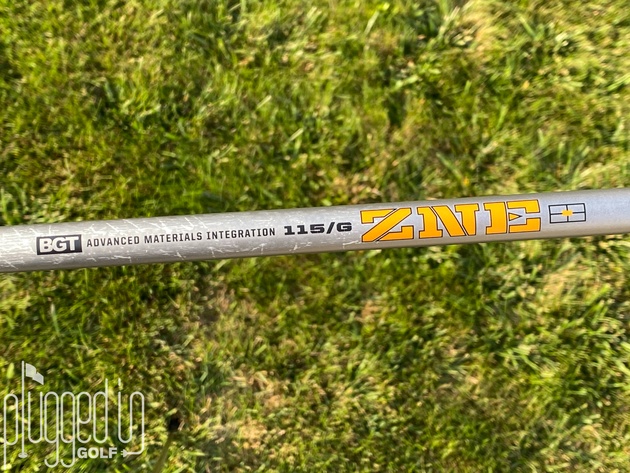 Breakthrough Golf appeared on the scene in 2018 with their Stability putter shaft [review HERE].  The following year they released the Tour version [review HERE] before slowing down a bit – as we all did – during COVID.

For 2022, they’re making up for lost time releasing both their first driver shaft – Brava, reviewed HERE – and now the ZNE wedge shaft.  With a look similar to the Stability shaft and very bold performance claims, the ZNE was something we were very excited to test. 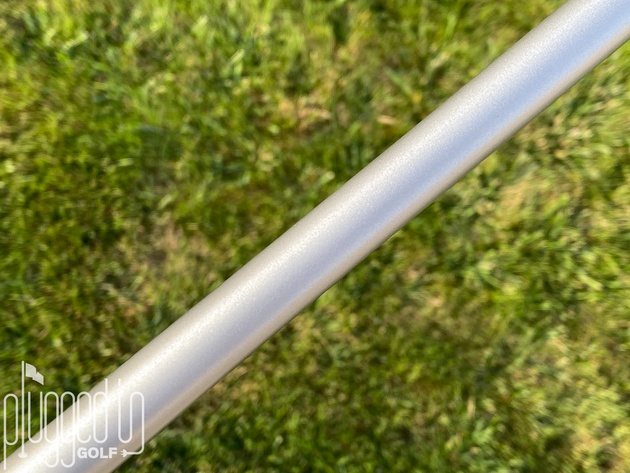 The Breakthrough Golf ZNE wedge shaft does not look like any other wedge shaft.  Its most unique feature is the taper in the lower third of the shaft, similar to what you see in the Stability putter shafts.  Above the taper is a graphite section.  The look of the upper changes by weight.  At 90 and 115 grams, the upper is grey; it’s black at 130 grams. 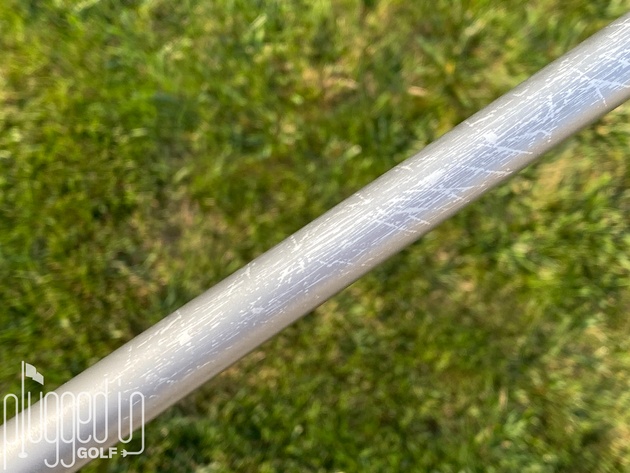 If you install the shaft logo up, you not only see the BGT and ZNE branding, but you also see the textured finish above.  Should you prefer a cleaner look, a logo down install gets you an “unblemished” look to the graphite (two picture above).

At address, the taper to the shaft is unusual, but it’s not distracting.  Ultimately, your focus should be on the ball, and the taper is far from that. 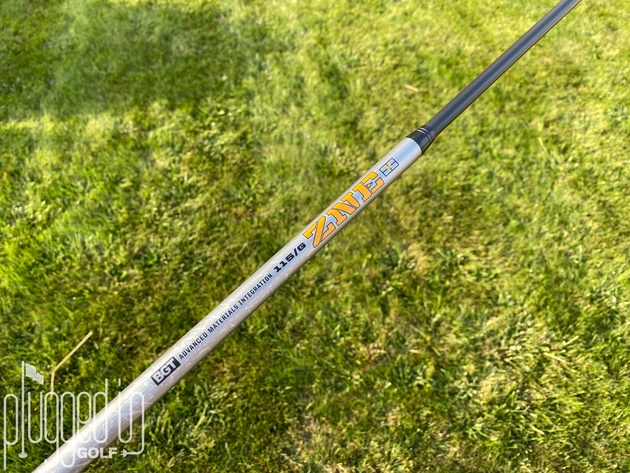 There are a lot of similarities between the feel of the ZNE wedge shaft and the Stability putter shafts.  The first thing I noticed is that the ZNE made impact feel softer.  Also, similar to graphite putter shafts, impact felt cleaner.  There seemed to be fewer “excess” vibrations in my hands, just a clear sense of where the ball met the face.

During the swing, the ZNE shaft feels extremely stout.  There’s a little bit of smooth or active feel in the butt section on fuller swings, but everything from mid to tip is extremely stiff.  If you’re currently playing a tour-style wedge shaft like Dynamic Gold, you’ll have no problem transitioning to the Breakthrough Golf ZNE. 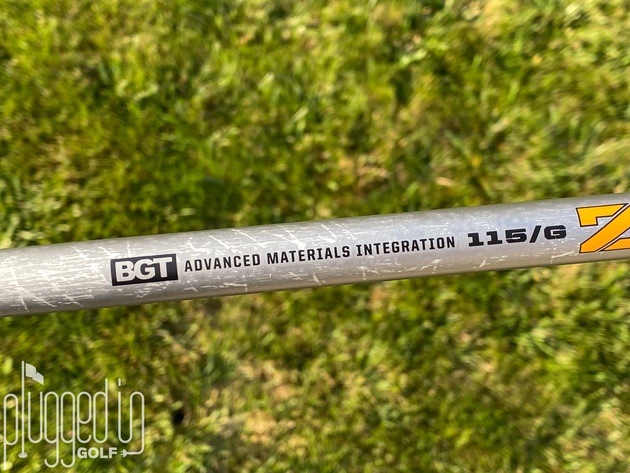 Breakthrough Golf is not shy about the performance claims for the ZNE wedge shaft, boasting more control and more distance.  Their internal testing claims that 92% of golfers saw improved distance control with ZNE and 90% had better dispersion.  They attribute this performance in large part to the “Stiffness Stack” – the section just above the coupling, which they state is 2.5 times stiffer than traditional wedge shafts.

To test these bold claims, I started by gathering data with a 53 degree Edison wedge [review HERE] shafted with a Dynamic Gold S400.  I hit pitches, half shots, and full shots and captured them with my Foresight GCQuad [review HERE].  Next, I pulled the DG, installed the ZNE, and built it to the same specs.  Once it was ready to hit, I repeated the same sequence of shots.

As I was hitting shots with the ZNE, I became more and more impressed.  Every ball seemed to trace the center line.  When I finished, I ran inside with my iPad to see if the data backed up my impressions.  It did.  My initial launch direction was twice as straight with the ZNE, and my average offline distance was cut in half. 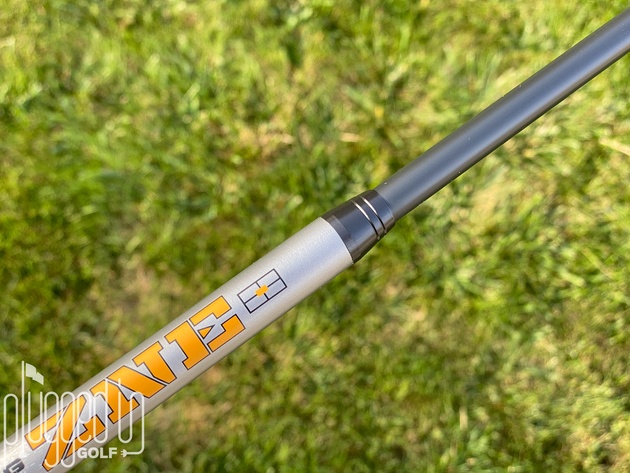 The scientific part of my brain jumped in and said, “Hold on, maybe you’re just swinging much better today,” so I grabbed my 55 degree Edison and went back to the launch monitor.  The results from this comparison – though not perfectly apples-to-apples – were still impressive.  The ZNE produced less variance and showed a 33% improvement in average offline distance.

While Breakthrough absolutely nailed the accuracy piece, I did not see a distance boost from the ZNE shaft.  It did create higher launch angles and lower spin than either of the steel shafts I compared it to, but that did not produce more distance for me.  Others may find that it does.

The final note I’ll share on the ZNE wedge shaft is that I found it most impressive on mishits.  During all this testing, there were several shots that came close to being s-words.  Rather than shooting out sideways, they flew much straighter than I deserved.  This feature may not be as valuable to high level players, but it can be a huge stroke (and embarrassment) saver for higher handicap players. 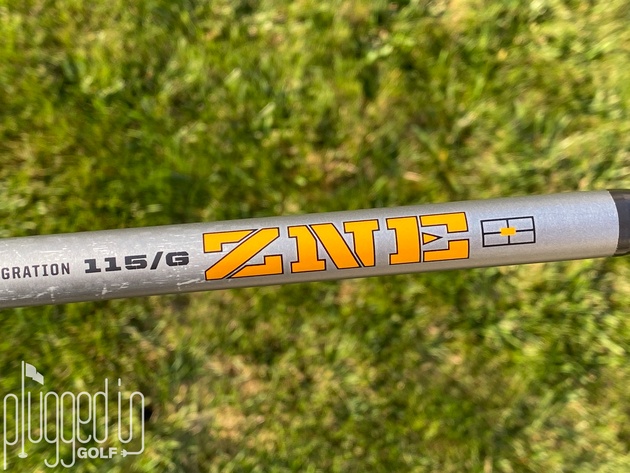 The Breakthrough Golf ZNE wedge shaft came with a lot of hype, but the performance backs it up.  I saw meaningful improvement in my accuracy with this shaft.  At $180 each, they are going to make your bag more expensive, but you may earn that back with all the birdies you’ll make.