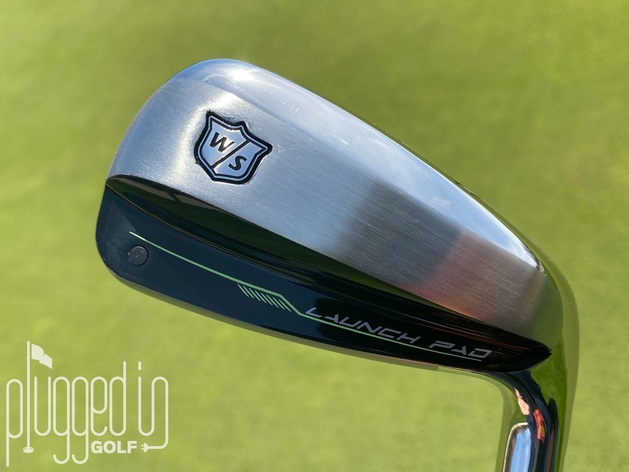 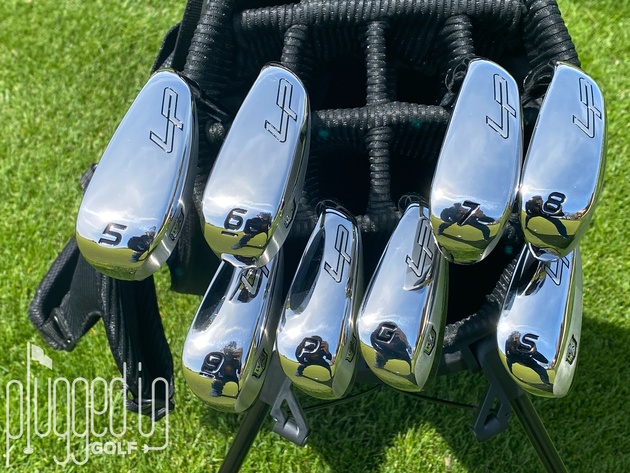 Whether you’re a new “COVID golfer” or a seasoned player in search of more help, Wilson’s Launch Pad family is designed for you.  This super game improvement iron set is built to launch the ball high and provide ample distance, even when your swing isn’t perfect.  I tested a set to see how this second version of Launch Pad fits into the SGI landscape. 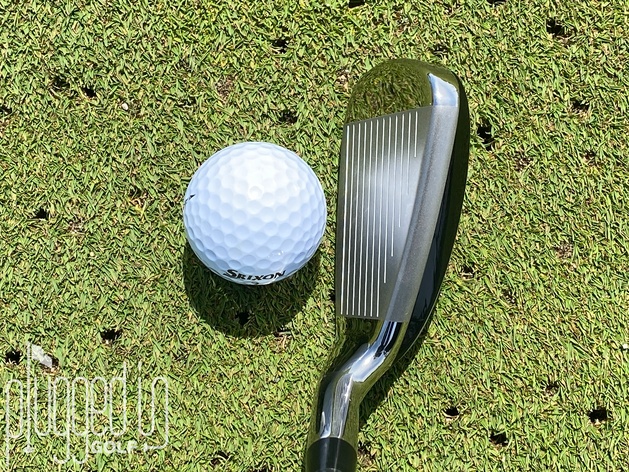 The 2022 Wilson Launch Pad irons are a set clearly targeted at the players who want the clubs to do their share of the work.  These irons have a substantial amount of offset and very thick top lines.  The blade length is also large, creating a big, reassuring hitting area. 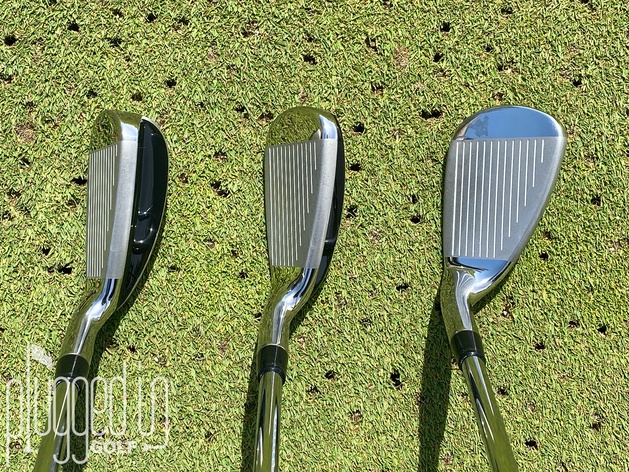 Though these irons aren’t billed as a combo or progressive set, but they do look the part.  As you can see, the 5I (left) could almost pass as a hybrid.  There’s a lot of “back” sticking out beyond the top line.  The black paint somewhat disguises the bulk, but it’s still there.  In the mid irons, there’s only a sliver of black behind the top line.  When you get to the wedges, that “extra” disappears.  There’s still a lot of offset in the wedges, but the top line slims down a bit.

In the bag, the Launch Pad irons look sharp relative to their peers.  The focus goes to the brushed steel section near the sole that has the Wilson Staff shield on the toe.  A second look will find modest “Launch Pad” branding on the black section.  There’s also an “LP” marking on the generous sole. 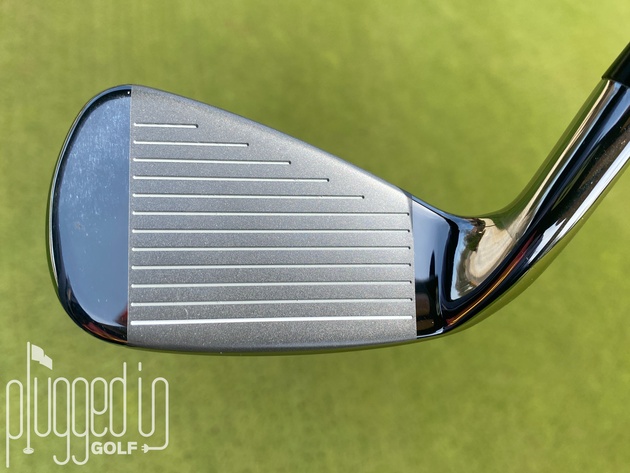 Just as with the looks, the sound of the Wilson Launch Pad irons changes noticeably from the long irons to the scoring clubs.  I started my testing with the wedges, and was shocked at how solid and quiet they were.  Given the large, hollow heads, I was expecting more volume.  Instead, I found a solid feel and a pleasant “snap” at impact.

As I moved into the mid and long irons, the feel remained fairly solid, but the sound shifted.  The 7I was noticeably louder than the PW, though the sound stayed out of the high pitched, “clicky” area.  When I got to the 5I – the longest iron offered – it was louder still.  With the 5I, the sound of impact is not problematic, but it is quite different than the wedges.

Throughout the set, the feedback on strike quality is fairly minimal.  Unless you miss the grooves, the sound is very consistent.  You can feel mishits in your hands if you’re paying attention, but the Launch Pad irons want to make you feel good about every swing. 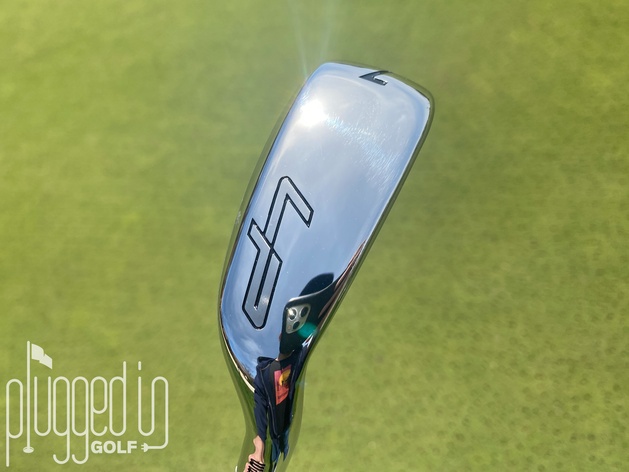 First, the soles on these irons are massive.  You have to actively try to get them to dig.  Even if you have a very steep swing and hit the big ball before the little one, these soles will work up and out of the turf.  They absolutely deliver on the promise of fewer embarrassing fat shots. 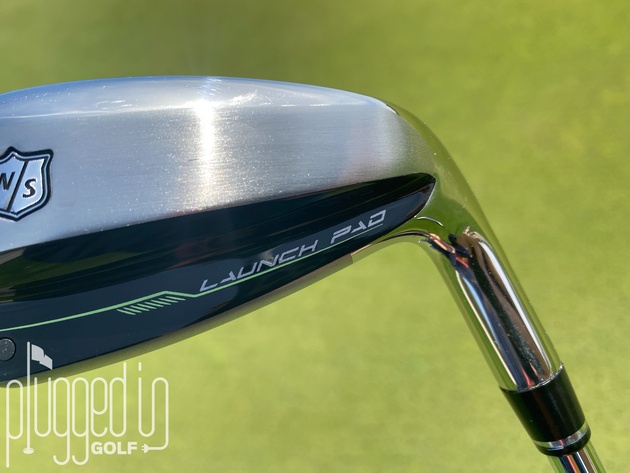 Those large soles also bring more of the weight down which makes the Launch Pad irons easy to hit.  Again, you have to really try to hit a bad, thin shot.  Hitting the ball a couple grooves low makes virtually no difference.

Now we’re going to get into the weeds a bit, because something about this set surprised me.  When I started my launch monitor testing, I fully expected another uber-long, low spin set.  I was wrong.  The spin that the Launch Pad irons produce is, to me, perfect. 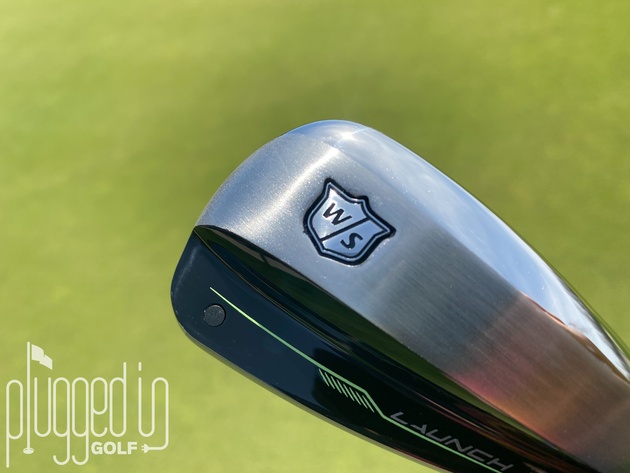 Starting with the wedges, I saw spin that was high enough to stop a shot but still controlled.  You won’t be backing balls up, but you won’t see shots balloon either.  In the mid irons, where spin often goes through the floor to chase distance, I saw the same thing.  Shots had plenty of spin to hold the green and appropriate landing angles.  This even continued to the 5I, which shocked me.

I love seeing this smart use of spin not only because it will help shots stay on the green but because it creates meaningful distance gaps throughout the set.  Thanks to the slightly elevated spin, the 5I will be playable for more golfers.  They also won’t have a clump of irons that all go the same distance.  I saw sensible gaps all the way from 5I to SW.  Major kudos to Wilson for engineering a set that’s long but also very playable and consistent. 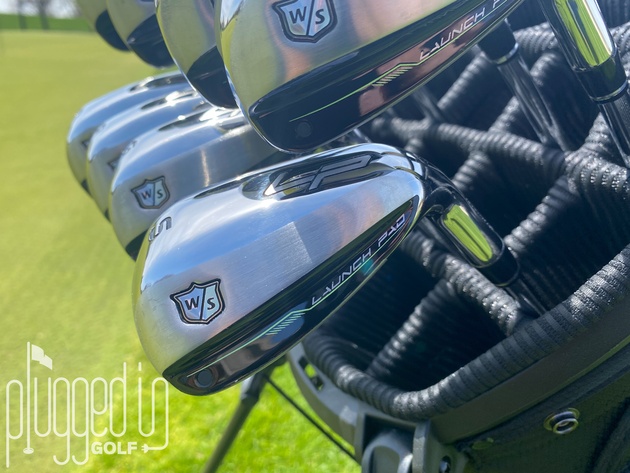 Distance is good, but distance with brains is even better.  The 2022 Wilson Launch Pad irons have the latter.  These irons are easy to hit and forgiving through the turf, but their real appeal comes from smart gaps between clubs and playable long irons.  If you want get your game off the ground, give these a shot. 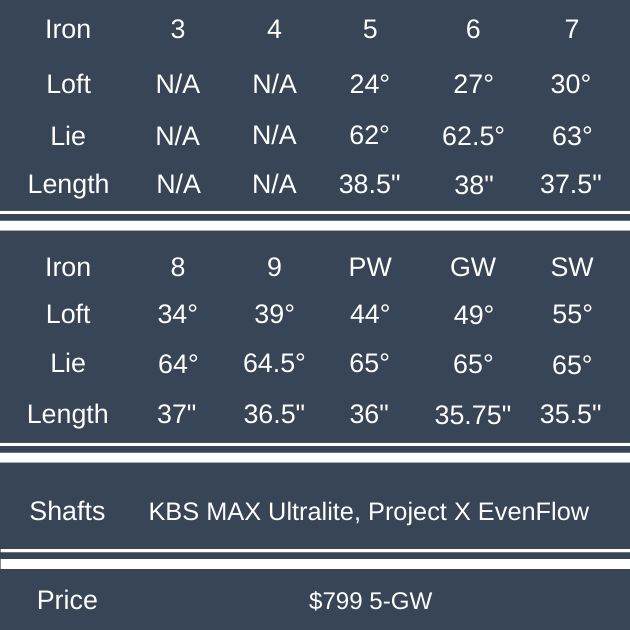