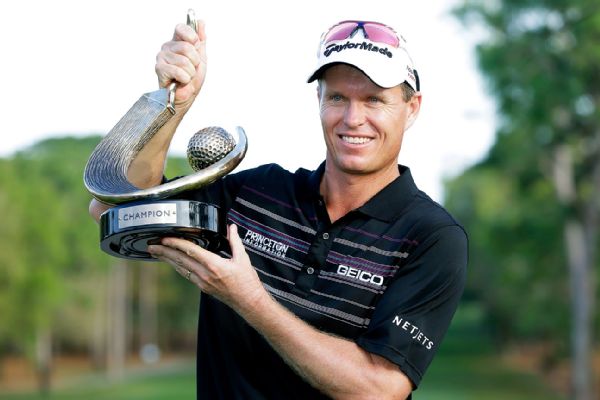 After last week’s WGC event, any pro golf tournament that wasn’t a major was going to have a pretty tough time matching up to Doral’s excitement.  Regardless, the Valspar Championship still had a pretty impressive field with the big names in contention, some struggles, more slow play talk, and a good finish.

After 54 holes, Robert Garrigus was the leader at the Valspar and looked like he was in pretty good shape to finish the job.  I didn’t have too much time to watch the tournament, but what I saw of Garrigus was entertaining and made it easy to root for him.  It goes without saying, Garrigus was dropping bombs all over the place.  It’s so fun to watch this guy tee it up because he actually hits the ball like all of us dream about doing.  Then, when Garrigus found himself in trouble, he would hit some of the coolest “trick” shots you’re going to see.  Whether it was through a hole in the tree, a neat downhill wedge shot from behind a cart path over a bunker, or a big putt, Robert Garrigus was doing it all.  I find myself pulling for Garrigus whenever he’s in contention.  I just like his story and his journey to get where he is today.  It’s worth a Google search.  Unfortunately, Garrigus could not pull out the win this week, but still put on a hell of a display of golf. 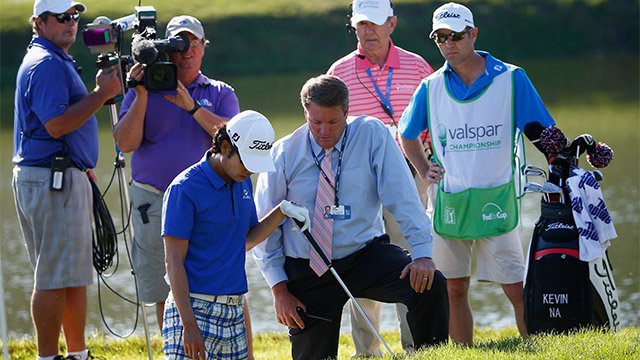 The topic of slow play was also front and center at the Valspar Championship.  During the third round, Kevin Na and Robert Garrigus were in the final group and spent most of the day two holes behind the group in front of them.  On the 7th hole, the rules officials put the pair on the clock, and both players eventually received a single bad time ruling.  As expected, many of the critics and armchair warriors were out in full force ripping these guys and complaining about how the pace of play is killing the game.  A quick browse of my Golf Twitter timeline gave some very clear opinions on both sides of the argument, but I have to say, I think Garrigus and Na were being thrown under the bus a bit unnecessarily.  Do I think Kevin Na has a tendency to take a bit long on his shots and it’s absolutely ridiculous that his caddy has to plumb bob all his putts for him?  Yes, 100%.  Do I think he was this big slow play monster on Saturday?  Absolutely not.  There were a few circumstances that caused the gap between them and the group in front of them, but if you look at the round as a whole, Garrigus and Na were playing at a fine pace.  The slow-poke pair averaged just 13 minutes a hole and finished their round in three hours and fifty-four minutes.  3:54.  When was the last time you walked a difficult golf course on warm busy Saturday and finished in 3:54?  I can’t think of a single time in the past four or five years for me.  Jason Sobel made a good point.  Next time you play, wager $10,000 on your round of golf and see how long it takes you to play.  Then keep in mind, that’s only 1% of what the winner was taking at this week’s event.

Against PGA Tour slow play? Here’s a fun experiment: Next time you play, wager $10,000. Just 1% of what winner makes. See how long it takes.

I have to take a minute to give John Senden credit.  The guy had a great week and played some really good, reliable golf that found him his first win in eight years.  There were a lot of highlight shots for him including a a really nice hole out chip shot on 16 during the final round.

Last but not least, it was nice to see some of the players look more human this week.  John Daly took a 12 on a hole.  Yep, a 12.  I don’t know if he was trying to do his best Roy McAvoy, but it didn’t work for him and he shot a 90.  I’d take that score on that course, but I’m not a pro trying to make a living shooting low scores.  My absolute favorite highlight was Justin Rose’s chunked 99 yard shot on 9.

Even Rose had a little fun with it!

Glad you all enjoyed the chunk in 9! Haha. #BigBallSmallBallAndAllThat

Another week on Tour in the books, and next week the best players in the world will ramp up their Masters preparation by participating in the infamous Arnold Palmer Invitational at Bay Hill.  I guess my invitation got lost in the mail…