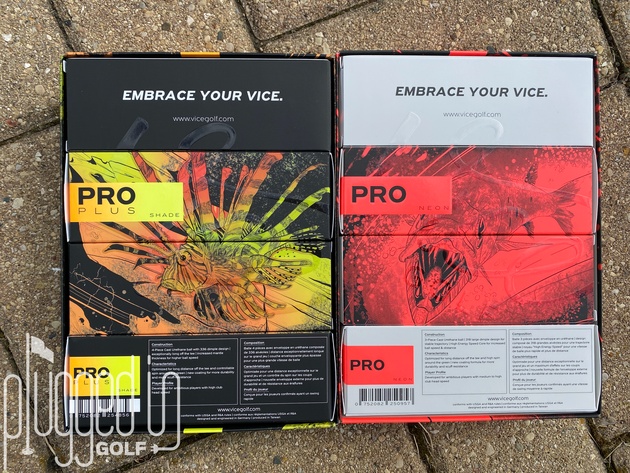 VICE Golf Pro and Pro Plus golf balls provide golfers with Tour-level performance at a price below the big name competitors.  Loads of color options, especially in the Pro model. 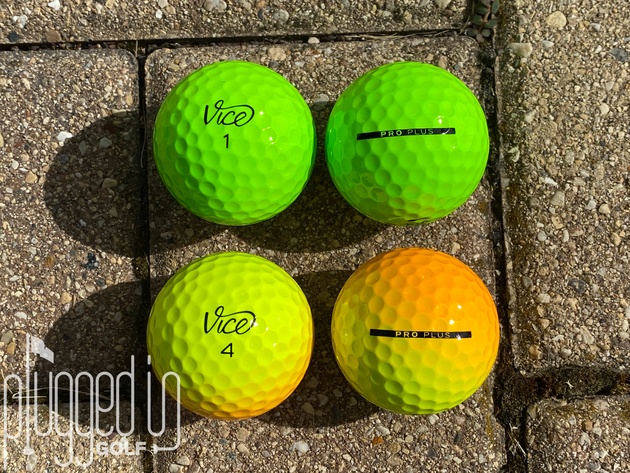 VICE Golf was one of the first companies to bring direct to consumer pricing to the golf ball market.  Having inspired a raft of imitators, they continue to expand their line, offering more models and finishes than almost anyone else.  They’re also going forward by going “back” – VICE Golf is moving from being online-only into the world of green grass retailers.  Should you pick up a dozen next time you’re at your local pro shop?  Let’s find out. 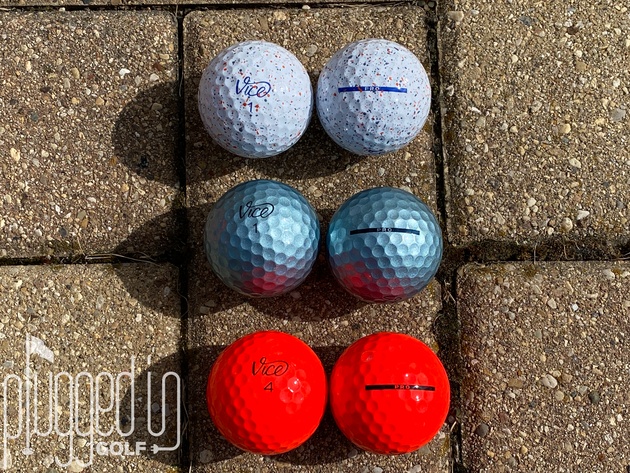 Both the Vice Pro and Vice Pro Plus golf balls have urethane covers and multi-piece construction similar to the big name Tour balls.  As such, my expectations for feel were quite high.

On the green, both balls delivered.  The Vice Pro Plus has a firm, solid feel and produces a pleasant “tock” at impact.  It’s a very responsive ball that provides excellent feedback on strike quality.  The Vice Pro is very similar in feel, but the sound is slightly lower pitched and quieter.  The difference is similar to the gap between a Pro V1 and Pro V1x.

Moving to the wedges and irons, both models feel similar to other Tour-style balls.  The Pro Plus leans slightly toward the firmer end of the spectrum; the Pro is right in the middle.  Neither is clicky or hard off the clubface, but they’re not marshmallows either. 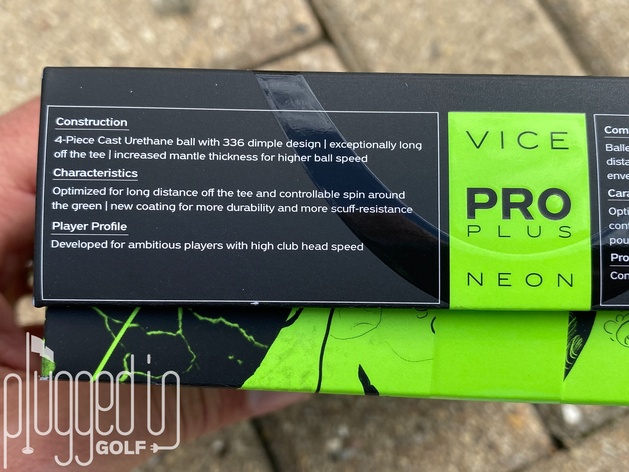 Both the VICE Pro and Pro Plus use an “extra-thin cast urethane cover for maximum feel and short game spin.”  In my launch monitor testing, I found that both are comfortably in the expected range of other Tour-style balls for wedge spin.

Comparing the Pro Plus to the top selling ball in golf, I saw slightly less spin on pitches and half wedges, but the difference was very small – less than 5%.  With the Vice Pro, the wedge spin was very slightly lower than the Pro Plus, again less than a 5% difference at most.  Overall, I would rate both balls as average among Tour-style balls for short game spin.

What did stand out for both models was the consistency.  Many golfers are concerned about balls from smaller companies because of quality control issues.  In all the wedge shots I hit, I did not get a single unexpected result. 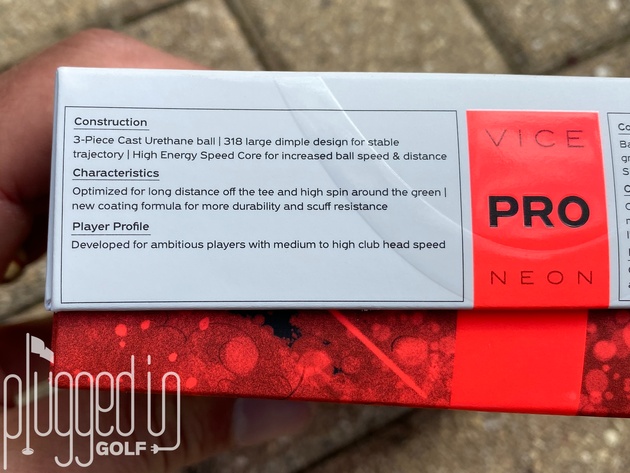 My long game testing started with the irons.  All my previous testing has shown me that in this area, the differences between golf balls can get quite slim.  That’s what I saw with the Vice Pro and Pro Plus, also.  Both balls performed very similarly to the average Tour ball with short and mid irons.  Again, the consistency of both Vice balls was impressive.

Finally, we get to the driver testing.  One thing on the Vice website that impressed me is their willingness to share raw data from their ball testing.  That data shows that both the Pro and Pro Plus dropped driver spin and gained significant ball speed in the current model compared to the 2019 version.  It also shows that the Pro Plus spins about 100 RPM less than the Pro V1x and the Pro spins about 100 RPM more than the Pro V1.

Per Vice, the Pro Plus is recommended for players swinging over 110 MPH.  The Pro is suggested for golfers with swing speed from 95-110 MPH.  As is often the case, I find myself in the middle – I can get over 110 MPH, but not every day and not by a huge amount.  With this in mind, it’s not surprising that I did not see a substantial difference in speed or spin between the two models.  I felt like the Pro Plus flew a little lower on the course, but that’s an observation, not something I can back with data.  Overall, both were solid off the driver in terms of speed and spin, well within the range of normal Tour balls. 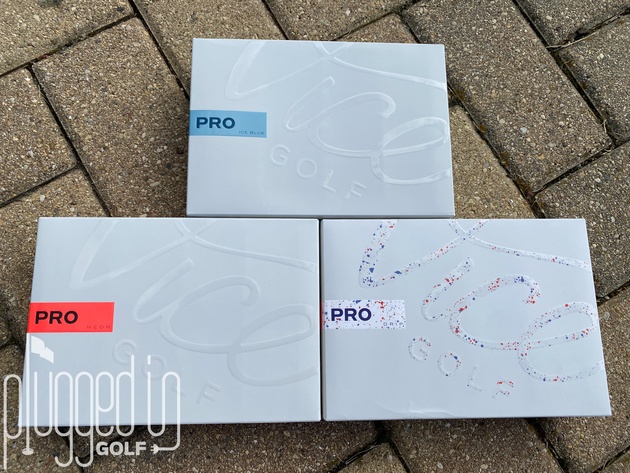 VICE offers the Pro Plus in three colors – white, Neon Red, and Neon Lime.  The Pro is offered in those three colors plus Shade (grey) and unique Drip patterns. 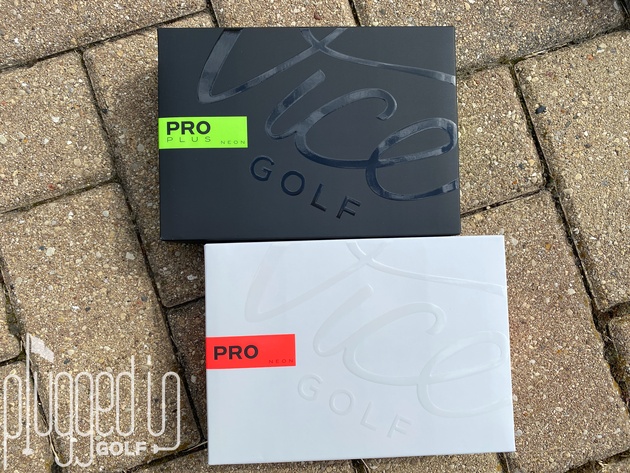 With great value, a load of fun color options, and the ability to dial in the exact feel you prefer, the Vice Pro and Pro Plus are among the best ____ golf balls on the market.  I left that blank because, with their recent move to green grass, it’s no longer fair to call them a DTC ball.  Also, I think they’ve earned enough respect to not be a “little guy” brand.  But whatever you call Vice, they make a quality ball.