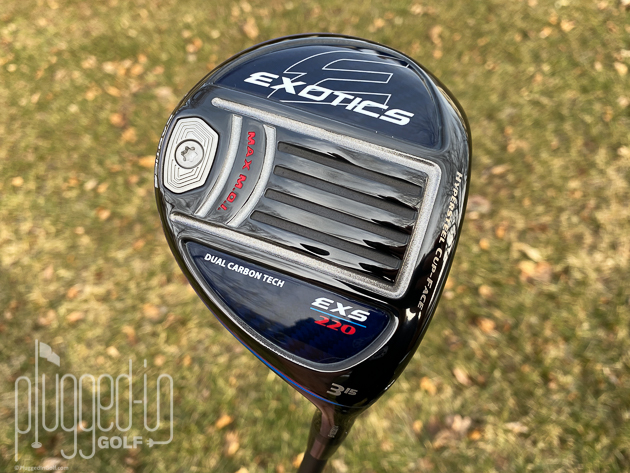 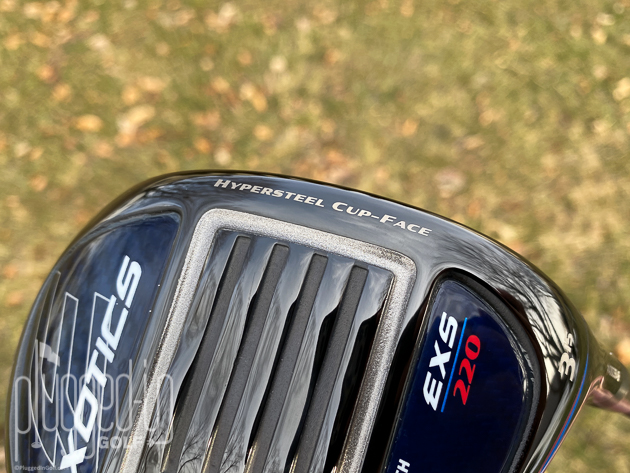 While Tour Edge Exotics has put out great clubs in every category, the area where they’ve truly made their mark is in fairway woods.  So, when they said that the EXS 220 is the best fairway wood they’ve ever made, it immediately went to the top of my “Must Test” list.  I got my hands on one to see if it can walk in the massive footsteps of the CB2 and TEE’s other legendary fairway woods. 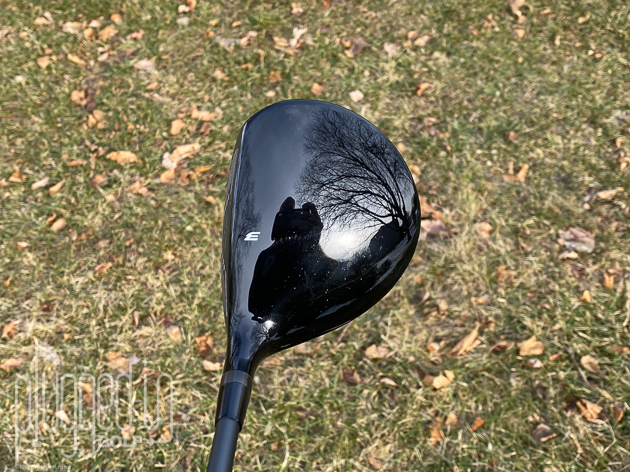 Much like the original EXS fairway wood (review HERE), the EXS 220 fairway wood has an address look that will appeal to a broad range of players.  Its size is slightly above average, but it’s extremely well proportioned.  It’s symmetrical and round with an average face height – all traits that make it very attractive to me.  What fails to come through in the photo above is the amount of sparkle in the crown.  It’s not distracting, but there’s enough to make it stand out from the crowd. 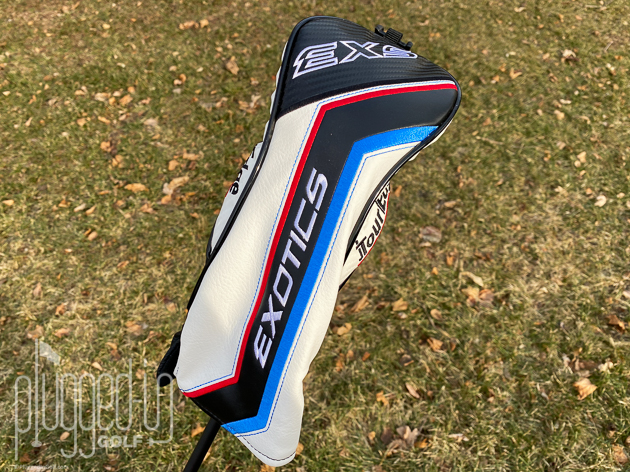 As with the EXS 220 driver, I think Tour Edge Exotics did a great job creating a complete aesthetic package.  For pure visual appeal, there’s no separating the EXS 220 from fairway woods that cost significantly more.  The navy blue carbon fiber in the sole makes it subtly different from other FWs, and the SlipStream Sole is a beautiful, functional centerpiece. 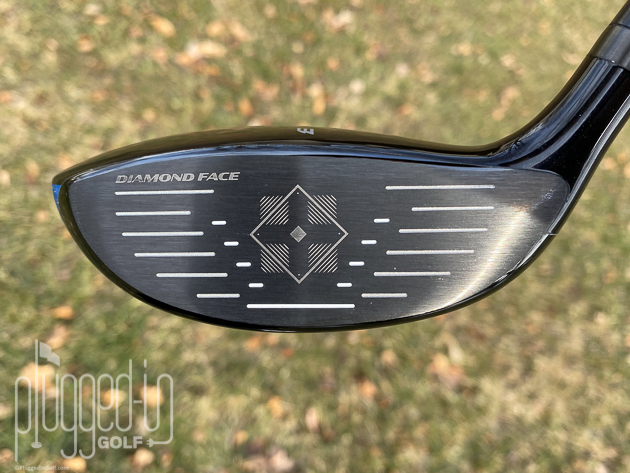 Given how impressed I was with the sound and feel of the EXS 220 driver, I had very high expectations for the little brother.  The EXS 220 fairway wood did not let me down.

Impact created a sound that was mid-volume and crisp without being metallic.  There’s no “tink” here, more of a solid, tenor “thwack.”

When it comes to feedback, I’ll share exactly what I wrote in my notes.  “Feedback is a bit limited, but who cares when the smash is always 1.45+”.  I was able to locate my bigger misses, but shots near the center of the face sounded and felt excellent. 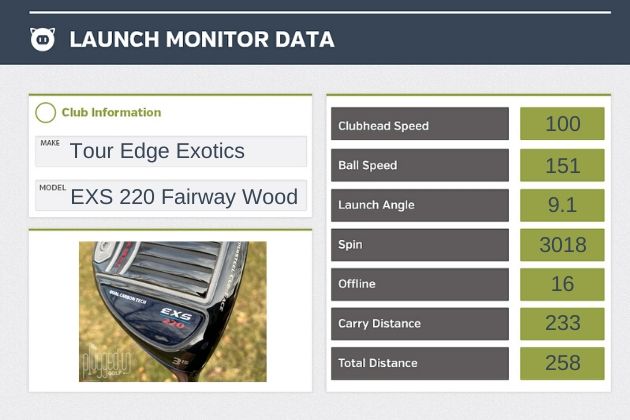 When a company says, “this is our best fairway wood ever,” that can mean a lot of different things.  It could relate to ball speed, distance, ease of use, or consistency with launch and spin.  In the case of the Tour Edge Exotics EXS 220 fairway wood, it actually means all of those things.

Since distance and ball speed are the sexiest things about any club, we’ll start there.  The EXS 220 has both in spades.  As I mentioned earlier, the smash factor was maxed out on good swings and shockingly high on bad ones.

The other pieces of the distance equation are launch and spin, and the EXS 220 fairway wood is very consistent with those as well.  With the Project X HZRDUS Smoke Yellow shaft, this is not a very high launching club, but virtually every shot launched between 8 and 10 degrees (those numbers will almost certainly be higher for players who aren’t as low launching as I am).  That predictability is invaluable on the course.  The spin numbers were equally robust. 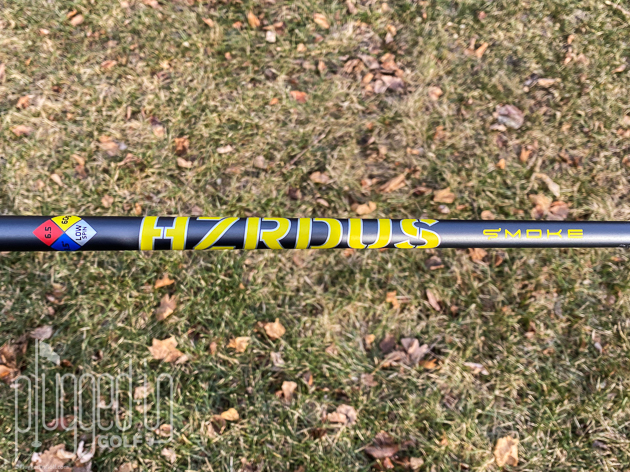 Regular readers know that I don’t carry a fairway wood in my bag because I struggle to hit them as consistently as hybrids.  The EXS 220 FW, however, was so dependable that I was actually having fun testing it.  Rather than grabbing the numbers I needed and moving on, I kept hitting the EXS 220 trying to shape shots and hit specific distances.

One important thing to note is that the EXS 220 FW is not adjustable for loft.  That means it’s even more critical to be fit for the right head.  Don’t assume that the standard 3W will be the longest for you.  Like me, you may get much more carry distance from the 16.5 or 18 degree version of this club.

Finally, Tour Edge has done something noteworthy with their stock shaft offerings.  Rather than offering the same shaft in every flex, they tested each head and shaft combination at different swing speeds to find the optimal pairings.  Their SpeedTested data led them to offer three different stock shafts: Project X HZRDUS Smoke Yellow in Stiff and X for 95 MPH and above, Fujikura Ventus 4T Core in Regular and Stiff for 85-95MPH, and Fujikura Air Speeder in Ladies, A-Flex, and Regular for 85 MPH and below. 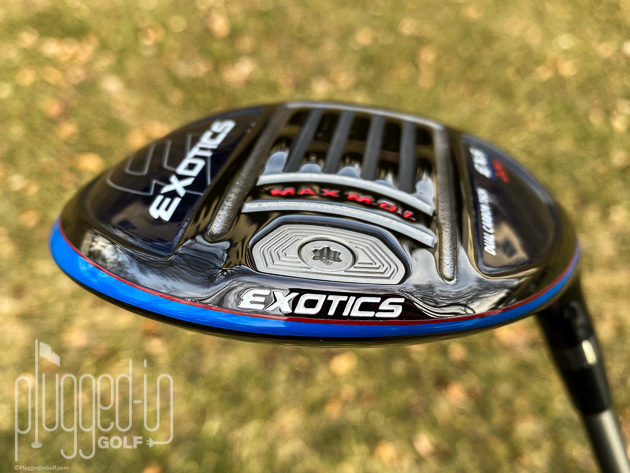 Whether you wear our your fairway woods or leave yours permanently under their covers, the new Tour Edge Exotics EXS 220 FW deserves a serious look.  Few fairway woods combine ease of use with high end performance like this one does.  And like its big brother, it delivers on performance without breaking the bank. 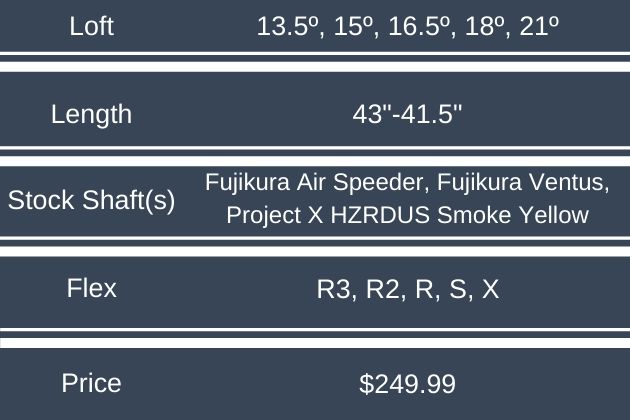