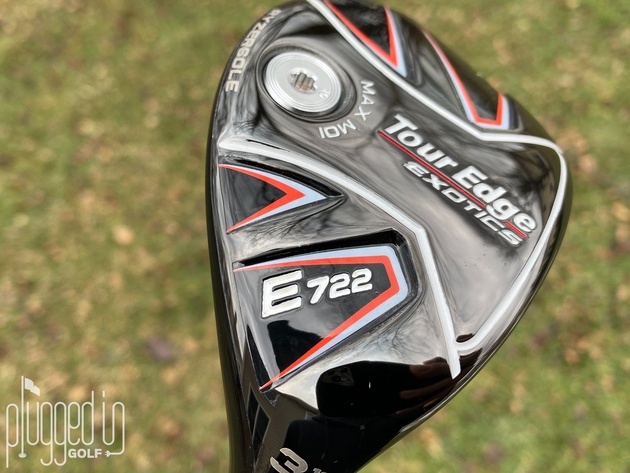 The Tour Edge Exotics E722 hybrid has a larger head for maximum forgiveness.  Looks like a bomber but has very well-rounded performance.  Do not sleep on this club! 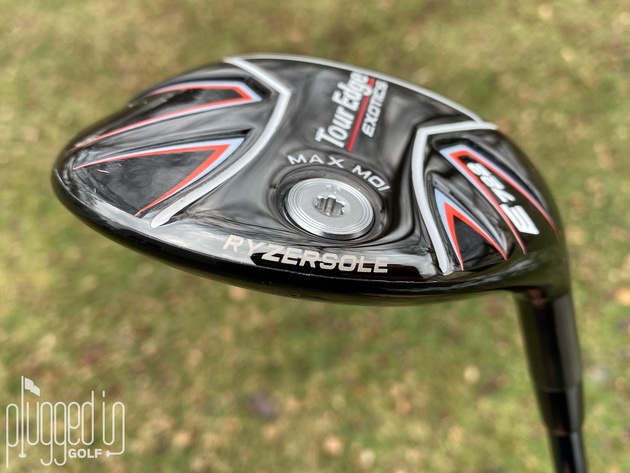 Once more for those that skip “50 Words or Less”: do not sleep on this club!  I know that’s the kind of thing I normally save for the conclusion, but I don’t want any of you emailing me in August saying, “Why didn’t you tell me how good this is?”  It’s very early to say this, but the Tour Edge Exotics E722 hybrid feels like a club that’s going to be an if-you-know-you-know hero, a club that lives in the bag for years.  Read this review, go try it for yourself, and get on the bandwagon early. 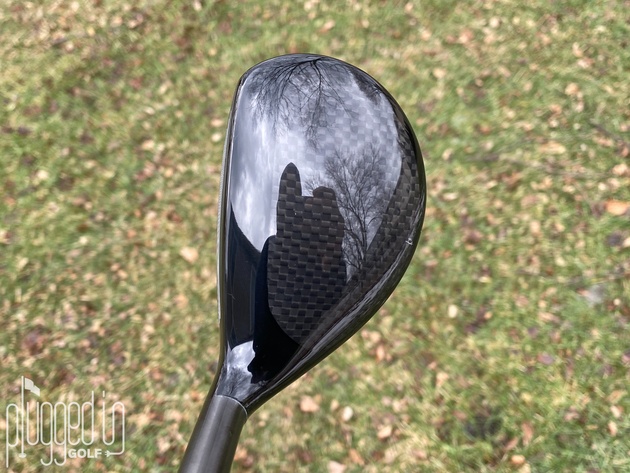 The Tour Edge Exotics E722 hybrid is a large but well-shaped hybrid.  At address, it has a clear pear shape which is fairly unusual in a hybrid of this size.  What’s also rare for a hybrid is the large carbon fiber section of the crown.  The face is fairly tall, though it doesn’t seem tall in relation to the rest of the club head.  Finally, the E722 hybrid sits perfectly square at address, another departure from similarly-sized hybrids. 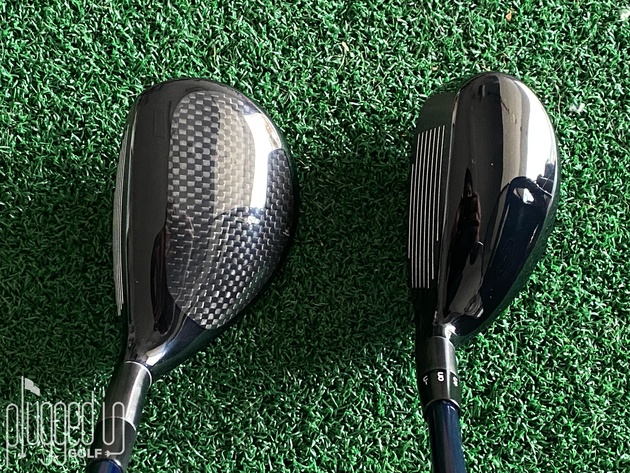 Tour Edge Exotics has divided their 722 line into E and C, as they have with their Hot Launch line.  The C stands for Competition – clubs for more skilled players – and the E stands for Extreme – as in extreme forgiveness.  Above, you can see the E722 hybrid (left) next to the C722 [full review HERE].  I love that Tour Edge has taken this opportunity to create two very different clubs.  Too often, OEMs make a tweak that’s meaningless to the recreational golfer and say it’s a different club.  That’s not the case here. 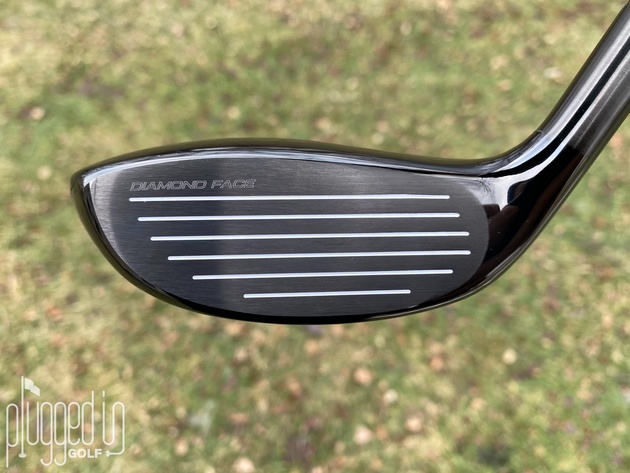 My instincts were split about what the E722 hybrid was going to sound like.  On one hand, Tour Edge Exotics has put a ton of emphasis on sound and feel in the last few years.  On the other hand, this is a big hybrid, so I was thinking loud, fast, and metallic.  My first hand was right: the E722 hybrid produces a muted clap at impact that’s mid-low in both volume and pitch.  This is matched with a feel that’s more solid than fast and thin.

You’ll get most of your feedback on strike quality through your hands.  Because of the muted quality of the sound, you won’t hear much difference between pure and off-center strikes. 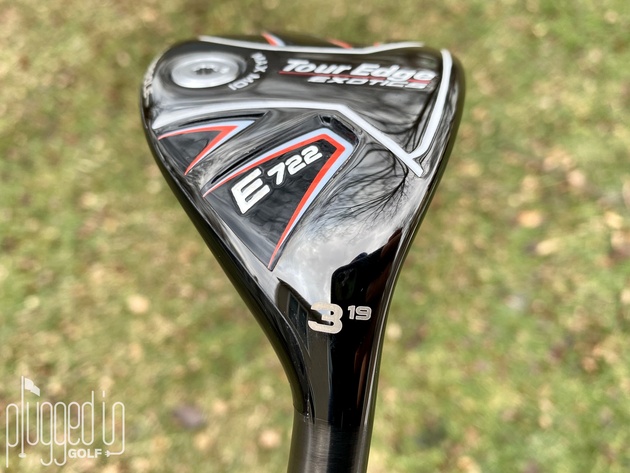 It should be obvious from the Introduction that I’m very high on this club.  The looks, sound, and feel are all quite good, but it’s the performance that really impresses me.  With so many hybrids chasing pure distance with very low spin, the Tour Edge Exotics E722 hybrid stands out with its versatility and consistency.

When I started my testing of the E722, the first thing I was looking at was ball speed.  Tour Edge Exotics has a long history of creating extreme ball speed, and the E722 did not disappoint.  Well struck shots have elite speed and, just as important, mishits are fast, too.

Next, my attention turned to launch angle.  Tour Edge Exotics uses a new Ryzersole design to get the CG as low as possible.  The result is a club that launches the ball high, easily, and consistently.  You need to hit the very bottom groove to produce anything other than tall, graceful shots.

Finally, I looked at spin, which is what I like most about the E722 hybrid.  The spin rates hit a sweet spot where the shots have plenty of distance but can also hold a green.  You can even work the ball, if that’s in your game.  But the key is that the spin is consistent.  With some low spin clubs, you can get big spin and distance variance.  The E722 keeps everything steady from shot to shot. 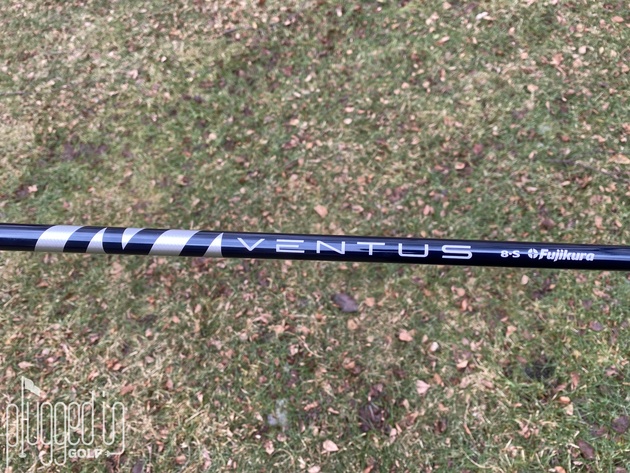 Tour Edge Exotics continues to be among the industry leaders when it comes to shaft choice and helping players pick the right shaft.  The E722 hybrid is offered with the KBS TGI Tour Graphite and the Fujikura Ventus Blue in four and three different weights, respectively.  Players who want a heavier shaft can opt of the Mitsubishi TENSEI White.  Golfers can use TEE’s SpeedTested recommendations to choose the best shaft based on their swing speed. 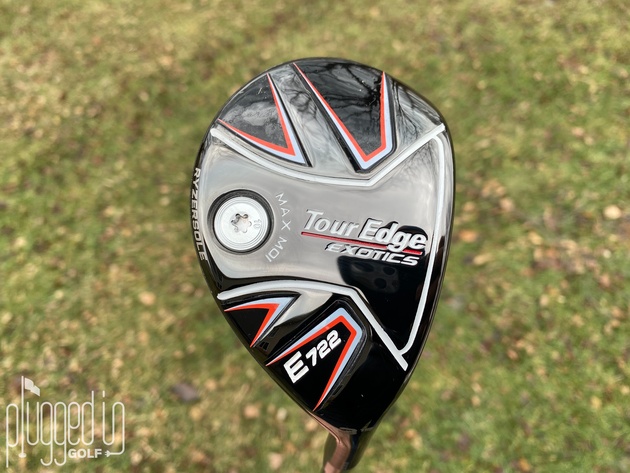 I’m giving the Tour Edge Exotics E722 hybrid such a strong recommendation because it’s the kind of club that will help a lot of golfers score better.  This club consistently launches the ball high, gives it plenty of speed, and produces consistent distance.  It may not win a pure distance competition, but it’s going to be more reliable than many of the ultra low spin hybrids.  If you need a club to put more predictability into your long game, give this a look. 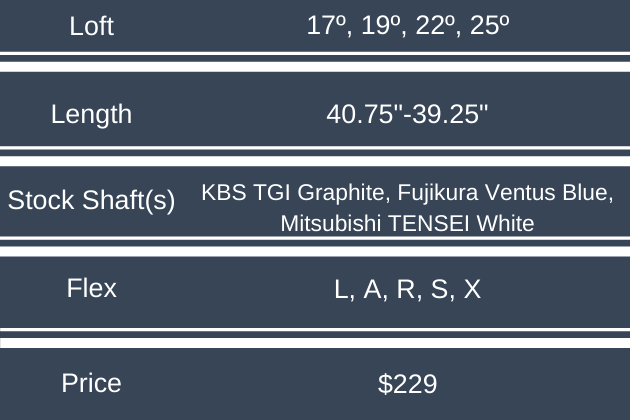