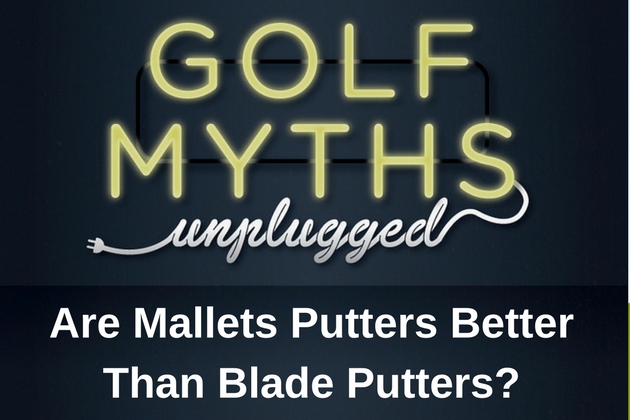 Led by the TaylorMade Spider, we have seen more of the best golfers using mallet putters than ever before.  We wondered why.  Are there inherent advantages to using a mallet or are the Tour pros just trying something new?  More importantly, what’s better for the average golfer? 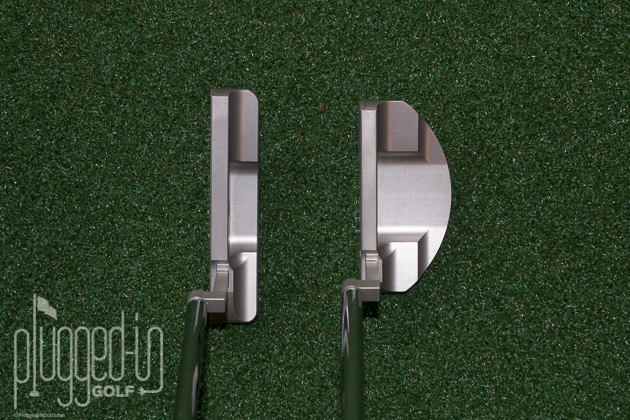 For this test, we gathered ten golfers with handicaps ranging from zero to twenty.  Each hit ten putts from ten feet, five with a mallet and five with a blade.  The putts were all done on the same indoor green, and every putt was measured by SAM Puttlab.

The putters used in this test were Edel Torque Balanced putters.  This allowed us to have the exact same toe hang, shaft length, head weight, swing weight, grip, and shaft for the two putters.  The only difference was the shape of the putter head. 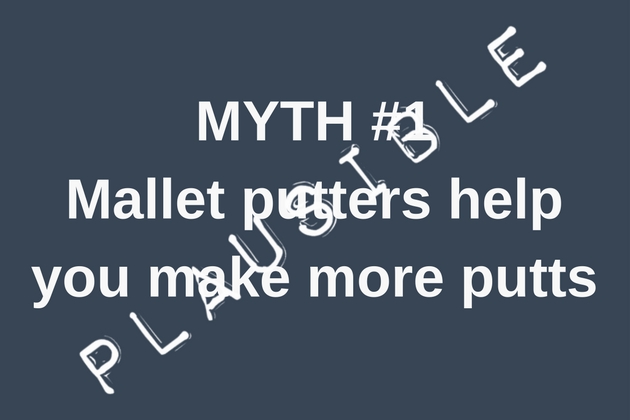 Ultimately, putting is all about getting the ball in the cup, and the mallet putter did that more than the blade.  Our group total was 38 made putts by the mallet to 32 by the blade.

We can’t rate this myth as confirmed due to the small sample size, but it definitely makes us want to test this further. 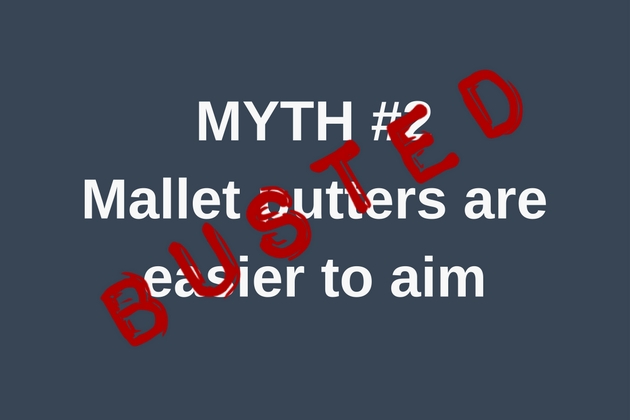 While the mallet putter did get more balls into the cup, it did not help our testers aim.

Only three of our ten testers produced a better average aim with the mallet.  Even this number oversells the mallet’s alignment virtues, because a player could aim one putt 4 degrees right, aim another 4 degrees left, and end up with a perfect average aim. 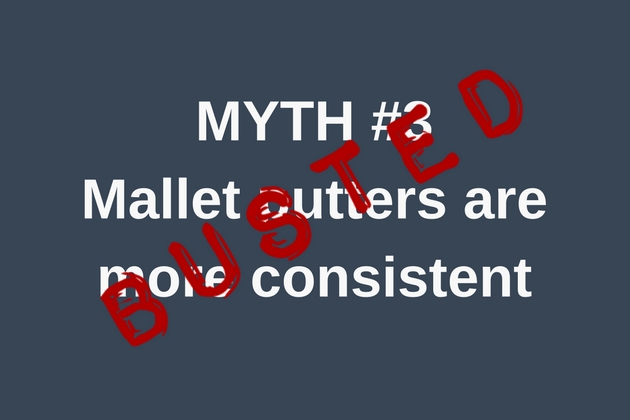 Thanks to the Puttlab data, we had a lot of ways to look at consistency.  All of them showed essentially the same thing: an even split between the blade and the mallet.

The numbers we took into account were face angle at impact, face angle consistency, rotational consistency, and impact spot consistency.  That means we were looking at where the club face was pointing at impact and how consistent the player was at that from stroke to stroke.  Rotational consistency shows how much the putter rotates open and closed from one putt to the next.  Finally, Puttlab assesses whether or not the player strikes the ball on the same spot on the face regularly or if they’re all over the place.

The one thing that surprised me the most in the SAM Puttlab data was how much changing the putter shape changed our players’ swing paths.  I expected to see some players shift a degree or two, but a change that small was actually rare!

Half of our testers saw their average path shift more than 4 degrees when they changed putters.  Two players were nearly unaffected, shifting just 0.5 degrees.  The other three moved their path nearly 3 degrees each.

What this tells us is that making a putter change can dramatically change your stroke.  If you’re making a switch, give yourself time to adapt to the new flat stick before deciding if it’s a good change. 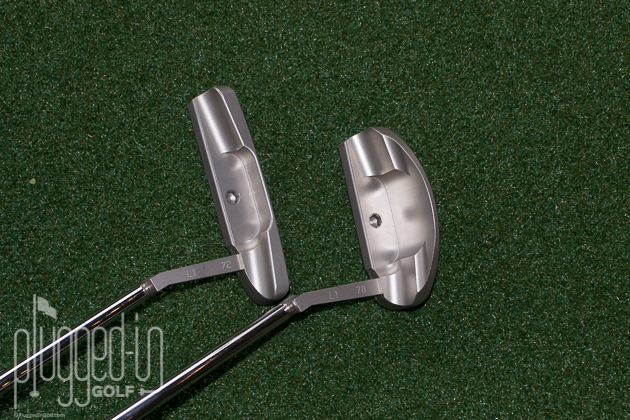 This test just scratches the surface of the research we plan to do on putters, but it does point to a predictable conclusion: the equipment you use can have a huge impact on your game.  Moreover, that impact is nearly impossible to predict.

As we saw, the mallet putter caused some players to swing the putter “worse” but more consistently.  Some players went the other way.  The bottom line is that, even on the greens, being fit into the right clubs can make a huge difference. 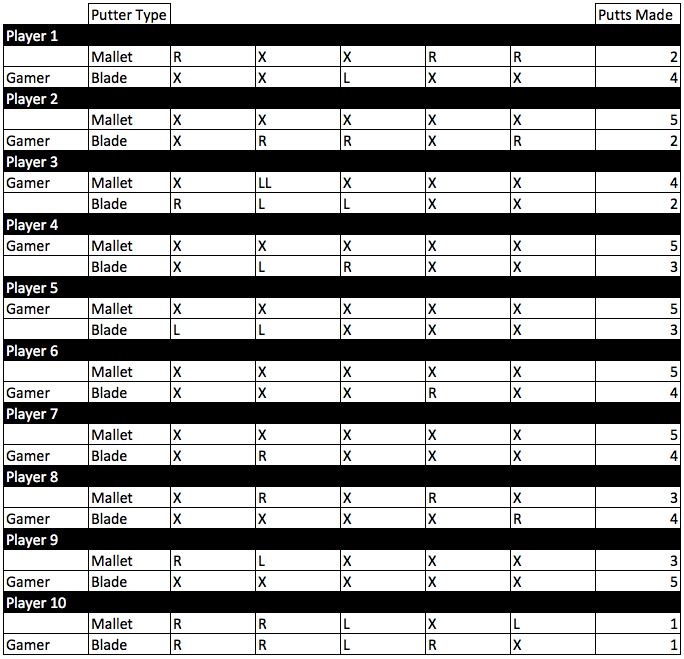 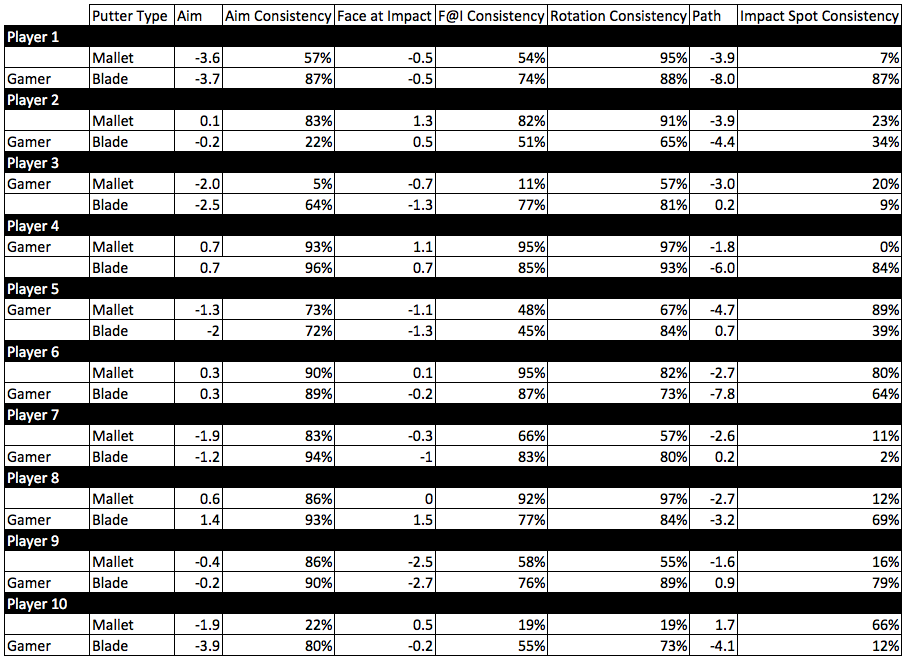