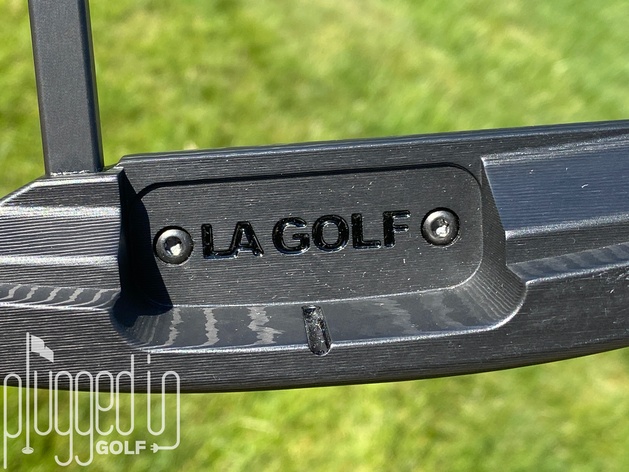 The LA Golf Putter uses innovative construction to bring mallet-like forgiveness to an Anser-style putter.  Much larger than a typical Anser.  Very expensive. 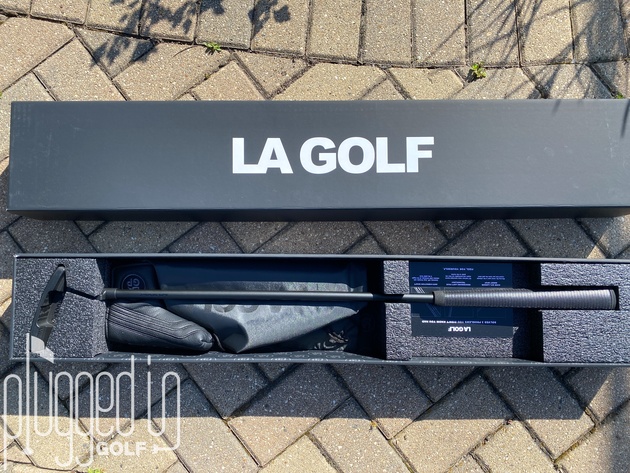 In just a couple years of existence, LA Golf has made major waves in the shaft market by signing golfers like Dustin Johnson, Michelle Wie West, and Bryson Dechambeau.  They recently launched their first putter and are aiming to make an equally big splash by going directly at the biggest name in the arena: Scotty Cameron.  They’re attacking Cameron’s lack of “evolution,” his “tiny sweet spot,” and offering a $300 trade in toward a new LA Golf putter (retail price: $1,500).  While all of that is good chatroom fodder, we’re only interested in one thing: does the putter actually perform? 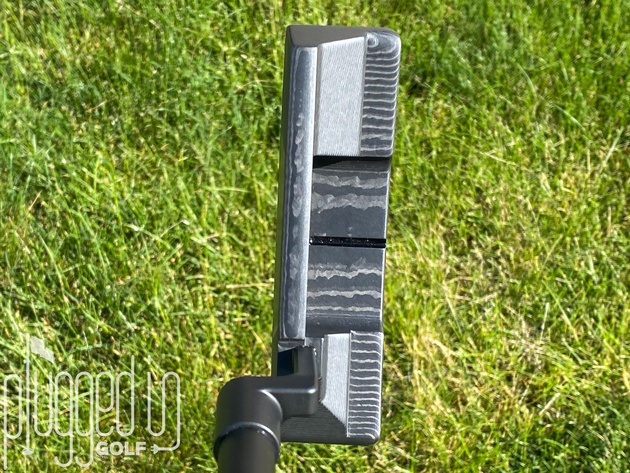 The first thing I noticed when I got the LA Golf Putter in hand is that it’s much larger than your average Anser 2.  It’s roughly an inch longer (heel to toe) and about 1/4″ wider (face to flange).  Within this larger footprint, the LA Golf Putter is fairly well proportioned.  It colors within the lines of this oft-imitated design.

Beyond the size, this putter stands out for the Damascus steel-like texture of the carbon prepreg.  How visible these patterns are depends on the light.  In brighter sun, they really pop, as seen above.  Heavily shaded greens will make this putter look matte black. 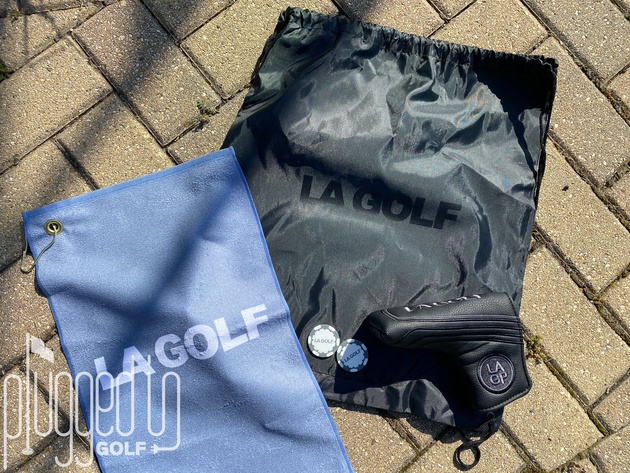 I’ll also note that the LA Golf Putter comes in a fancy box with a couple extras.  There’s a drawstring bag, poker chip ball markers, and a towel that breaks up the all-black color scheme. 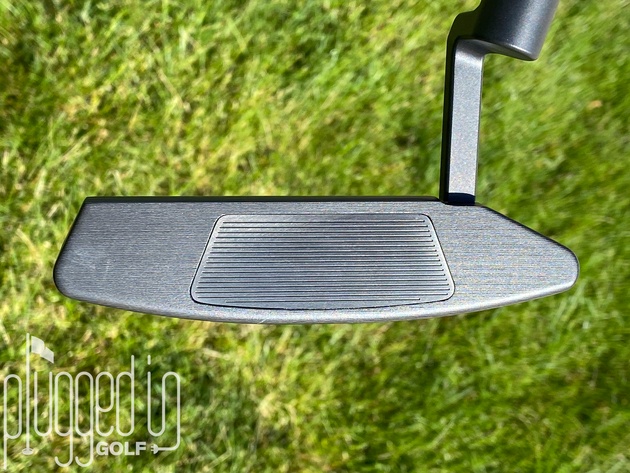 The LA Golf Putter has a blend of elements that I’ve never encountered before.  A WINN Jumbo Lite grip is installed on an LA Golf graphite putter shaft.  That connects to a stainless steel hosel which sits in a carbon putter head with a stainless steel face.  To say that I had no idea what to expect would be an understatement.

Despite the unorthodox construction, the sound and feel of impact was not too far out of the ordinary.  Striking a premium ball created a sound that was similar to a quality milled putter but duller and muted.  It’s almost like putting with earmuffs on.  The feel varied quite a bit depending on the length of the putt.  Inside ten feet, the face feels a bit dead.  On longer putts, the feel is more lively with a little bounce to it.

Feedback on strike quality is about average for a blade putter.  If your strike is within the cavity, the change in feel is quite small.  Bigger misses are more easily detectable.  The sound of impact becomes a bit more jagged on a mishit. 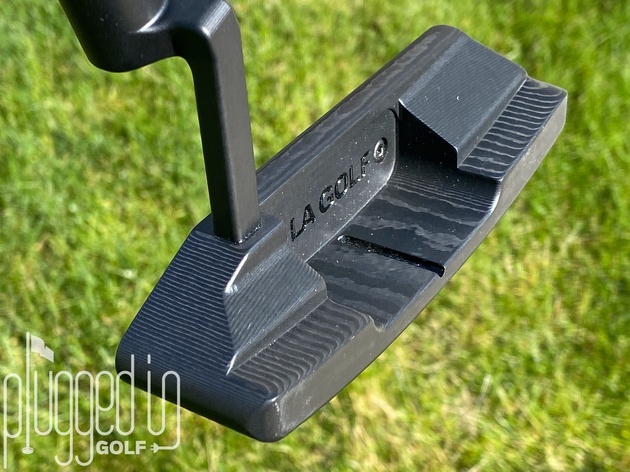 The LA Golf Putter touts three major performance features: a larger sweet spot, Descending Loft Face Technology, and a stiff, “anti-vibration” shaft [TPZ putter shaft review HERE].  LA Golf claims that the larger sweet spot is the result of the head’s carbon construction which allows for superior weight distribution.  The Descending Loft Face Technology is borrowed from SIK putters [review HERE] with the goal of creating a more consistent launch angle.  Finally, the shaft, produced in-house by LA Golf, is designed to reduce any movement and inconsistency from the stroke.

In my testing, I found that the LA Golf Putter does provide forgiveness on par with the best mallets available.  Mishits have a limited impact on ball speed, and the head doesn’t twist noticeably either.  Even more impressive in the launch monitor numbers was the impact of Descending Loft Face Technology.  Launch angle barely moved regardless of the strike quality. 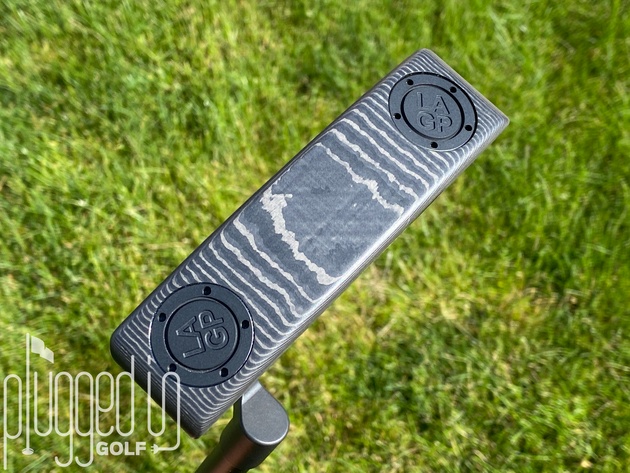 For those that don’t want a blade style putter, LA Golf also makes a mallet.  It’s a traditional mid mallet with a rounded, symmetrical shape.  The mallet also comes with a trio of hosel options.  Where the blade has only the plumbers neck, the mallet offers plumbers neck, slant neck, and a face-balanced slant neck.

In both the blade and mallet, players have the option of getting 70 or 90 gram weights in the sole.  For the blade, this changes the weight from 350 grams to 390 grams.  In the mallet, the weights are either 360 or 400 grams.  Per LA Golf, the weights are not meant to be changed after purchase. 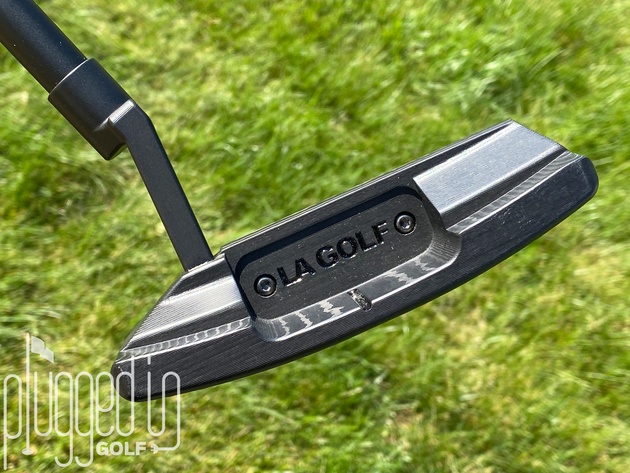 At $1,500, the LA Golf Putter isn’t going to steal the flat stick market from Scotty Cameron anytime soon.  But for players that want a putter that’s unlike anything else on the green, this certainly qualifies.  The unique construction and excellent face technology give it consistency that’s equal to the best modern mallets.