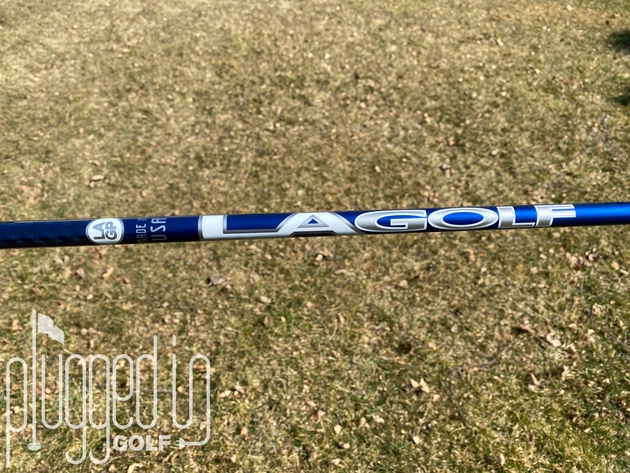 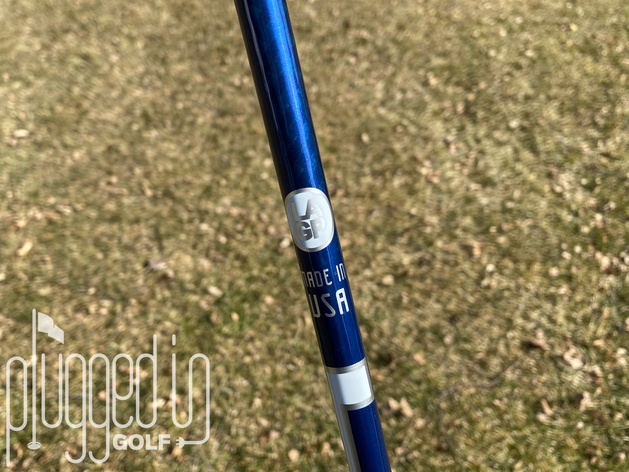 When LA Golf came onto the scene, they promised to shake up the shaft market.  They did just that when they signed then-#1 ranked Dustin Johnson as a partner and board member.  Dustin had famously stuck to the same driver shaft for years, but left it behind for a signature model from LA Golf.  I recently tested the DJ Signature Series to find out why. 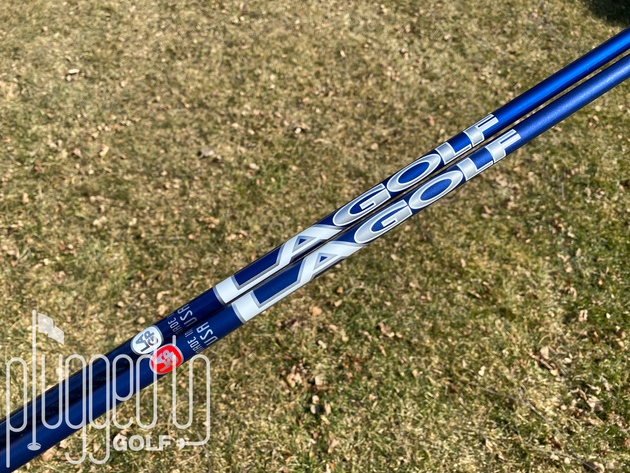 The LA Golf DJ Signature Series is a beautiful shaft.  Though, to be fair, this color combo is almost exactly what I’d pick for my signature shaft, so I may be biased. 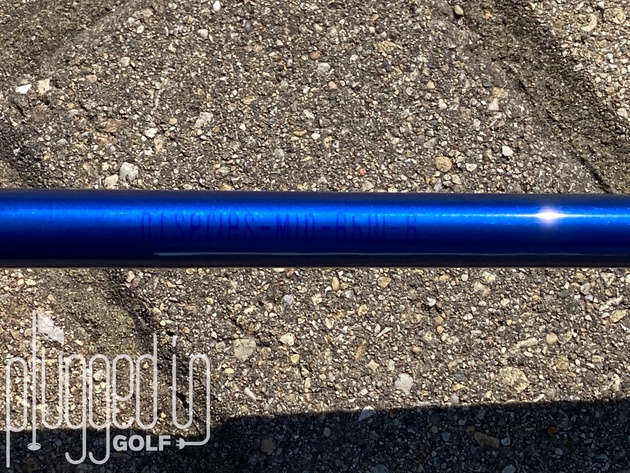 The shiny base color is just short of navy blue, and the white and silver LA Golf branding pops off of it.  All of the focus goes to that LA Golf logo because there’s virtually nothing else on the shaft.  As you can see above, the markings for DJ Series, weight, and flex are almost invisible.  This creates a distraction-free look if you install the shaft logo down. 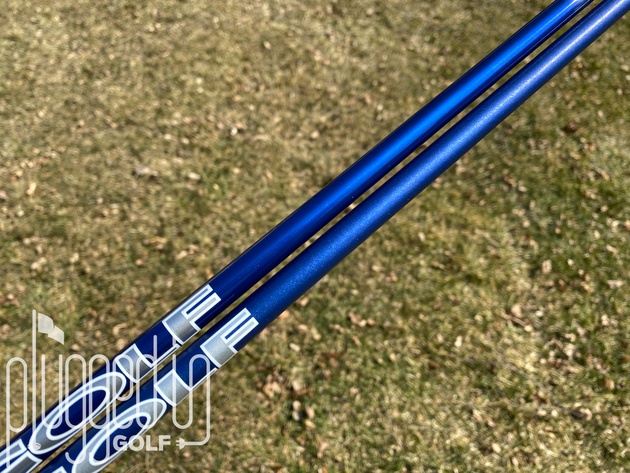 At a glance, the DJ Series looks very similar to the Bryson Series [review HERE], but there are three notable differences.  First is the finish.  The DJ Series has a glossy finish, the Bryson is matte.  Second, Bryson’s blue is just slightly darker than DJ’s.  Finally, the LAGP logo on the Bryson Series is red, DJ’s is white. 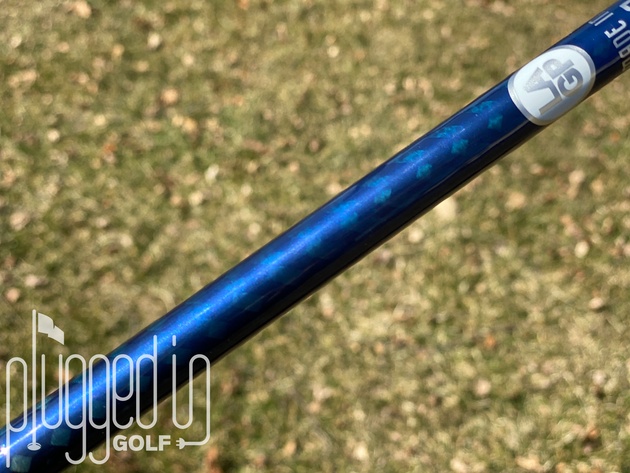 My biggest curiosity heading into this review was how similar the LA Golf DJ Signature Series shaft would feel to his previous gamer.  Giving it a quick “wiggle test,” I noted a substantial amount of movement.  This made me think it would feel similar.  Further testing showed that this shaft is in the same vein, but it’s not a clone.

The word I kept coming back to when hitting the DJ Signature Series was “buttery.”  This shaft feels smooth and easy to swing, even in a Tour X flex.  There isn’t a defined kick point, and it doesn’t have that electric, whip crack feel, either.  The shaft feels like it gently works with your swing to add a little extra speed into the ball.

Finally, LA Golf designed the DJ Signature Series with a slightly higher balance point.  It’s not dramatically counterweighted; it’s right on the border of being noticeable for the average player.  I measured it to be 1.5 swing weights less than the Bryson Signature Series. 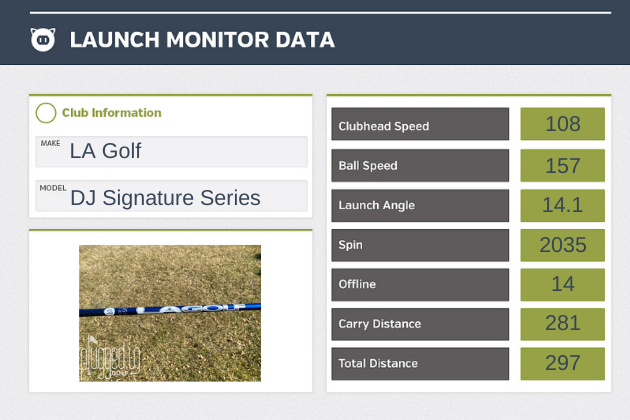 Despite a sizable talent and speed gap, DJ and I have similar taste in driver shafts.  We both had the same gamer in the past, so I was excited to see if his new gamer would work as well for me.  Perhaps I can’t say it works quite as well for me – I won’t be teeing it up on Tour – but I got great results.

The first thing I noticed – in no small part because of the feel – is the excellent speed.  I was seeing consistently high club and ball speeds whether I was making controlled swings or standing on it. 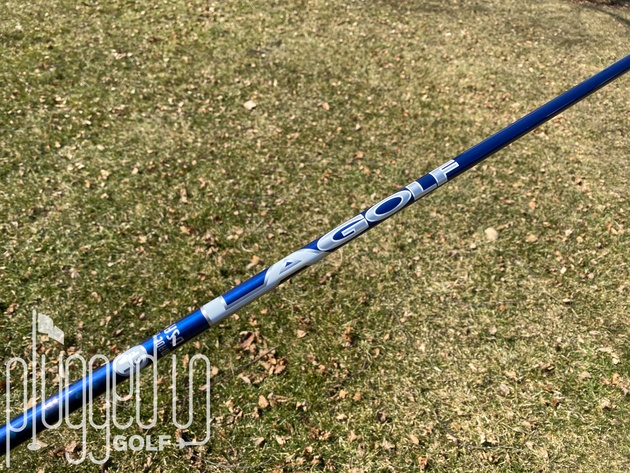 Once I got over my newly recovered speed, I noted something even more important: the consistency of the start line.  Despite the smooth feel, the tip section of this shaft is very solid.  Virtually every drive that I hit started just right of the center line with a soft draw.  I prefer seeing a fade, but the repeatability of this gentle push draw was very exciting.

Finally, LA Golf promotes the DJ Signature Series as mid-low launch and spin.  I was testing the DJ Series head to head with the Bryson Signature Series, and the higher launch and spin were clear.  For me, the DJ put my drives at or just about my normal launch window with consistent spin.  I wouldn’t rate the spin as low, but it’s controlled and predictable.  There was not a single balloon ball nor any knuckleballs. 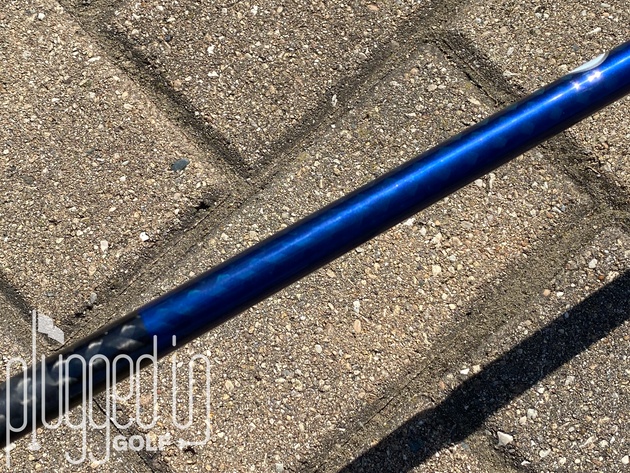 The LA Golf DJ Signature Series shaft is available in three weight classes: 55, 65, and 75 grams.  The lightest version is offered in A, regular, stiff, and X.  In 65 grams, the A flex is dropped in favor of TX.  Finally, at 75 grams, you can choose between stiff, X, and TX.  Get all the specs HERE. 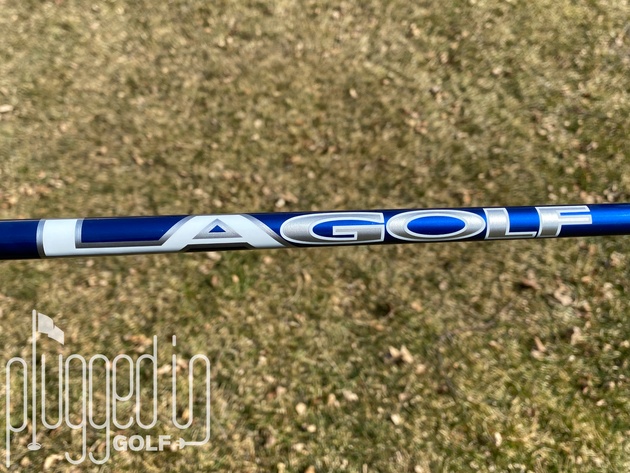 The LA Golf DJ Signature Series is a shaft that’s going to have very broad appeal.  It feels smooth without giving up stability, and the mid launch/mid spin performance should work for a lot of players.  Check one out at your local LA Golf fitter to see if it can unlock longer drives for you.