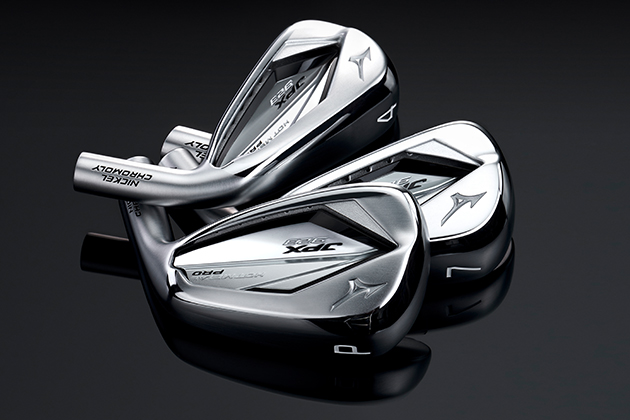 BRASELTON, GA – Mizuno’s new JPX923 series of irons are the latest chapter in Mizuno’s highly successful JPX story. The family of irons has been engineered for custom performance to offer the ultimate blend of looks, feel and workability. The JPX923 Series has been developed alongside Mizuno’s comprehensive custom-fitting program to deliver exceptional performance and help all golfers get the very most from their games, from elite tour players to slow-swinging amateurs, and every player in between.

The new family features five unique iron models created from three specific metals and developed using Swing DNA data from over 350,000 real golfers. The expanded head options combine with one of over 50 custom shafts for specific trajectory, ball speed and ease of use to create options for players of all standards.

The JPX923 Tour is a shallow cavity suitable for elite amateurs and professionals, featuring refined scoring irons that are more compact with a noticeably shorter blade length from 6-iron to GW for precision where it’s most needed. The irons are finished with a non-reflective white-satin brush.

A mid-sized, full body Grain Flow Forged iron delivering a perfect balance of ball speed, stability, and feel. Our 3rd generation of Chromoly Forging (4-7 iron) incorporates a milling slot that extends wider to heel and toe.  Paired with an even thinner clubface it creates our highest one-piece Forged ball speeds from an even greater portion of the clubface.  The irons showcase a thinner top line throughout, plus compact scoring irons (8-GW) and bevelled sole for improved turf interaction.

The JPX923 Forged is a mid-size cavity iron suitable for a wide range of players, from professionals to mid-handicap amateurs. The 4-7 iron are Forged from a single billet of 4120 Chromoly and back milled from to heel and toe. This creates extreme ball speeds from a compact workable profile. The face thickness is now reduced to just 2.2 mm behind impact compared to 2.6mm in the JPX921 Forged. The 8-iron to GW are forged from 1025E Pure Select mild carbon steel for ultimate precision, control and feel in the scoring zone. 8-iron to GW are more compact with shorter blade length for further control.

Introducing Nickel Chromoly – A new material with so much additional ball speed, our engineers switched their focus to feel and stopping power. At 35% stronger than our original Hot Metal material, 4335 Nickel Chromoly enables a high-energy 8% thinner clubface. Combined with Mizuno’s vibration controlling V-Chassis and deep CG design, the JPX923 Hot Metal irons are as enjoyable and controllable as they are long. The seamless cup face construction delivers the deep centre of gravity needed for a high launch and controllable landing angle for increased stopping power whilst the thinnest part of the sole has been extended 18% wider to create a wider high-energy area on the face for more consistent ball speeds.

All JPX923 irons will be available through the Mizuno Custom Program, which offers one of the widest selections of no upcharge shafts and grips in the industry. It provides a comprehensive range of custom fitting options, from state-of-the-art Mizuno Performance Centers spread throughout the world to a global network of Mizuno Fitters and Swing DNA Fitting Centers that rely on the Mizuno Shaft Optimizer and high-tech Swing DNA software to pinpoint each customer’s best-performing specifications.

Mizuno has always strived to “create the best products for consumers,” and the entire JPX923 iron family adheres firmly to that spirit and desire, while offering the best performance benefits that modern technology can bring. 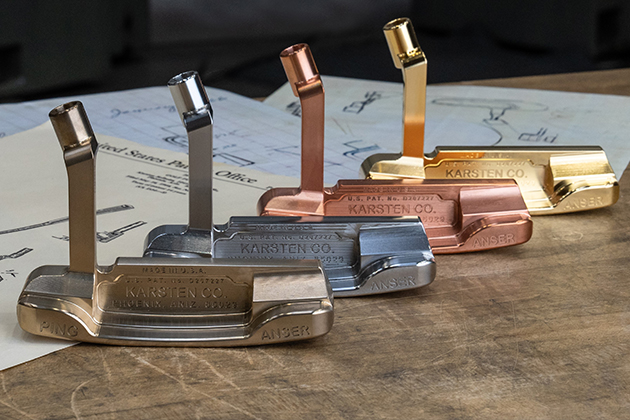 PHOENIX, AZ – The PLD Anser Patent 55 in copper, the third of four fully machined collector’s models being offered as part of a year-long celebration acknowledging the issuance of the Anser putter patent 55 years ago, is available exclusively through pingpld.com beginning Monday at 2 pm ET.

Only 55 of the precision-milled, handcrafted putters, which are made in the USA and serialized, will be available via the website for $790 (limit one per customer).

The choice of copper as the material is a tribute to Arizona and its rich tradition as the country’s leading producer of copper. Arizona has also been the home of PING for more than 60 years and it’s where founder Karsten Solheim first sketched the Anser design on a 78-rpm record sleeve in 1966.

Granted on March 21,1967, by the U.S. Patent office and assigned the number D207-227, the game-changing Anser patent set the standard in putter design that still dominates the winner’s circle today. More than 700 Anser victories are represented in the PING Gold Putter Vault, including the 1969 Masters, the first of 20 major victories for PING’s most iconic design.

The history of the famous design is well-chronicled, from it first being sketched by Karsten Solheim on a 78-rpm record sleeve to his wife Louise’s idea to name the putter Anser, cleverly suggesting Karsten leave out the letter “w” in the word answer to ensure the name would fit on the back of the putter. Earning its first PGA Tour win at the 1966 Florida Citrus Open, just over a month after its introduction at the Phoenix Open, the Anser’s instant popularity changed the trajectory of the company practically overnight as demand grew so quickly it necessitated a move out of the family’s Scottsdale, Ariz., garage and into a small building in north Phoenix to keep up with production. The original building still stands at the company’s 50-acre headquarters.

The Anser is also famous for its influence on other putter designers in the golf industry, many of whom celebrated the day the patent expired.

“A lot of time has passed since the invention of the Anser putter,” said John A. Solheim, the youngest son of Karsten and Louise. “We think it’s important to remind the golf industry and some of the younger golfers that the familiar putter design they see with other brands’ name on it was created by Karsten in his garage in the mid-1960s. I was fortunate to be at his side building the first Ansers and continued to do so for many years. It was among Karsten’s many contributions to the game that eventually earned him induction into the World Golf Hall of Fame, the only manufacturer to be so honored. We’re flattered that the design has had such a significant influence on putter design for the last 55 years and we think this is a great time to celebrate its continuing success by offering golfers a piece of PING history with the introduction of the PLD Anser Patent 55 model.”

The final PLD Anser Patent 55 is gold plated and milled from stainless steel.