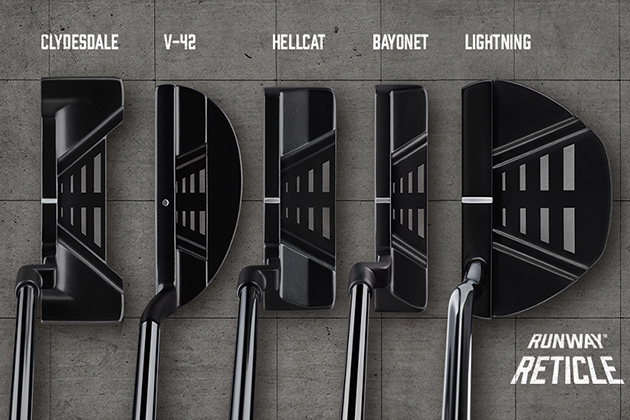 SCOTTSDALE, AZ – Adding to an already impressive 0211 Golf Club lineup, PXG has introduced its all-new 0211 Putter series with five eye-catching designs. A mix of blade and mallet-style clubheads, PXG 0211 Putters sport flared cavities with a bold Runway ReticleÔ alignment aid. The distinctive markings are designed to help players, even those new to the game, sink more putts from any distance.

A global golf research and development powerhouse, PXG has deployed several new technologies in conjunction with some of its flagship innovations to fully optimize the 0211 Putters. A prominent, new Runway Reticle alignment feature is a focal point for this entire putter series. It presents a geometric, arrow-like aid that supports enhanced face awareness and control. This visual mechanism pairs with a topline alignment feature, specific to each model, to improve aim throughout the putting stroke. A flared cavity design offers additional visual cues and helps save critical mass from the center of the clubhead. This mass saving is repositioned to the perimeter of the clubhead for increased moment of inertia (MOI) and improved stroke stability.

All five clubheads are cast from 303 stainless steel and present a milled Pyramid Face Pattern. This game-changing patented design is optimized to help improve mishit performance and ensure consistency in significant factors that affect ball speed, spin, and roll for outstanding distance control.

Unlike PXG’s flagship Battle Ready™ Putters, hosels in the 0211 series are not interchangeable. Instead, each hosel has been carefully selected for optimum performance with each clubhead design.

PXG 0211 V-42™ Putter
Named after the notorious battlefield blade, the V-42 Putter is the only mid-mallet putter in the PXG 0211 Putter lineup. With a classic crescent shape and unique alignment aids, the V-42 Putter minimizes distractions and provides critical precision. Combined with a heel-shafted hosel, this putter helps golfers deliver the club face square, especially for those with a tendency to over rotate the clubhead at impact.

PXG 0211 Bayonet™ Putter
A traditionally shaped blade with a surprisingly high MOI for a blade-style putter, the Bayonet Putter is one of the lightest putters in the 0211 lineup and is designed to deliver calibrated control. The PXG 0211 Bayonet Putter is paired with a plumber’s neck hosel to help golfers square the club face at contact. The Bayonet moniker is derived from the dagger-like weapon attached to the muzzle of a rifle.

PXG 0211 Lightning™ Putter
Named for the fighter aircraft famous for its speed, distinctive twin-engine design, and warfare versatility, the PXG 0211 Lightning Putter delivers extreme control for a stabilized approach on the green. As the heaviest putter in the PXG 0211 Putter lineup, the Lightning Putter delivers extreme stability and consistency. Its wide-body design creates space for a significantly flared dual-step geometry and bold Runway Reticle alignment aid to help golfers maintain focus and smoothly execute every putt. Paired with a double bend hosel, which creates a face-balanced hang angle, the Lightning putter is ideal for golfers who tend to push the ball.

Completing the PXG 2021 0211 Golf Club lineup, the new putters follow PXG’s long-held belief that golfers at every level and budget deserve to play with the world’s finest golf clubs. The PXG 0211 Putters offer game-changing performance at a killer price, and are now available for order in-person, over-the-phone, and online.