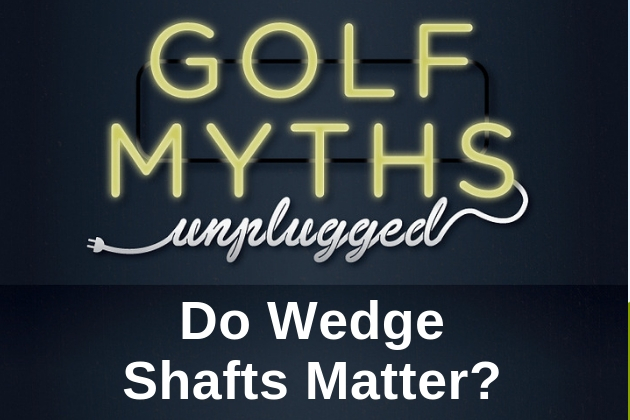 There may not be a more overlooked piece of golf equipment than the wedge shaft.  Even good players and golfers who are into their gear often can’t tell you what shafts are in their wedges.  Does it matter?  It’s just a wedge shaft, it can’t affect performance that much, right?

We put six wedge shafts to the test to see if they can impact performance or if they deserve to be overlooked. 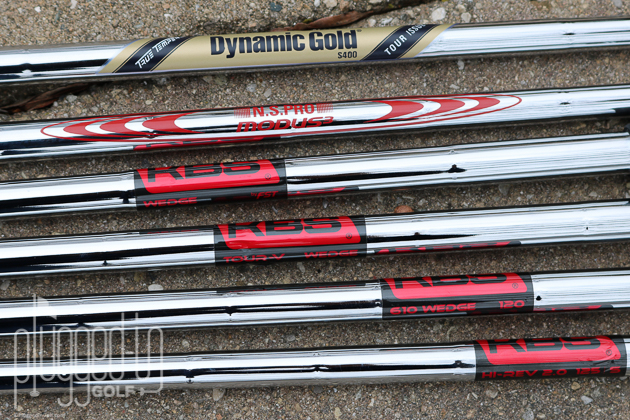 Myth #5 – The same shaft will fit all your wedges

This test may have included more shots than any test to date.  We brought together five testers with handicaps ranging from +2 to 10.  Each tester hit six different wedge shafts with two different shot types – a full swing and a partial swing – seven times each.  Every wedge head was the same – a New Level Golf M-Type 56 degree wedge – and every wedge was built to the same length and swing weight with the same grip.  Each tester hit the different shafts in a different order. 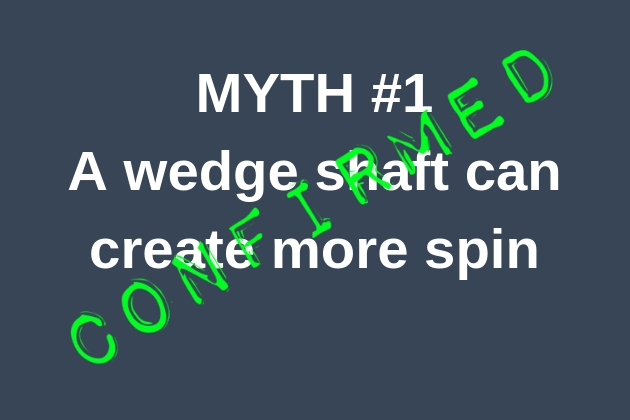 Across every level of player, we saw significant differences in spin with different shafts.

On less-than-full shots, all but one of our testers had a difference of at least 1500 RPM between their highest and lowest spinning shafts.  On full shots, the difference was even greater: 1800 RPM on average. 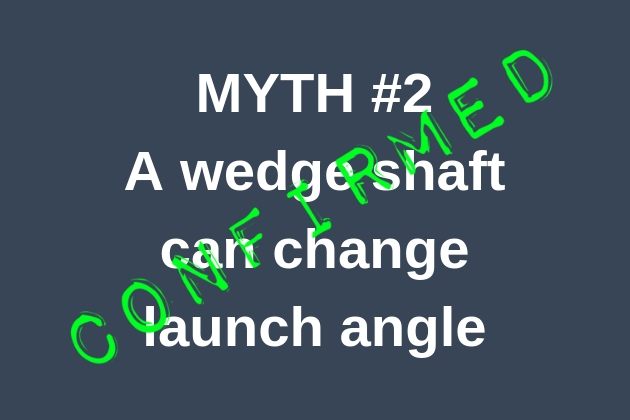 The results for launch angle mirrored those of spin.  Shaft choice can make a noticeable difference in launch angle on full and partial shots for players of all abilities.

On average, we saw a gap of slightly more than two degrees between a player’s highest and lowest launching shaft.  In our most extreme case, a player had a four degree separation.

There was slightly more consistency in the shaft that players launched the lowest on full swings.  On partial shots, the results were unpredictable. 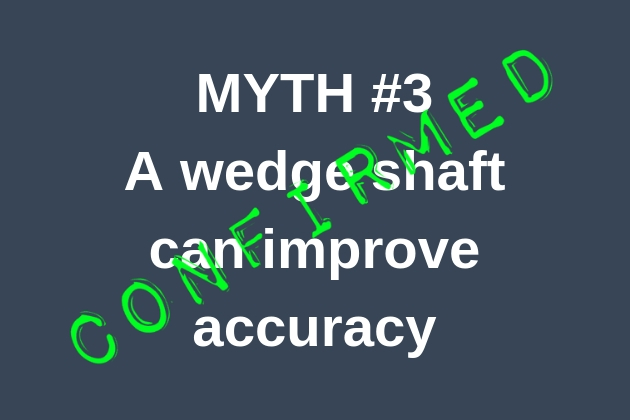 While I was not surprised to find that wedge shafts impacted accuracy, I was surprised to see the amount of difference they made.

On partial shots, our best players found that the right shaft shrank their left-to-right dispersion by half.  Our other testers found even bigger difference – one went from a dispersion of 12 yards to just 2!

When we moved to full shots, the gap between the best and worst fit grew predictably.  Our best players, again, had shot patterns roughly twice as tight with their best-fit shaft.  Interestingly, our higher handicap players were able to mirror our best players when they had the best shaft (4 yards L-R).  When given a shaft that did not fit them, their shot patterns grew by 150% or more. 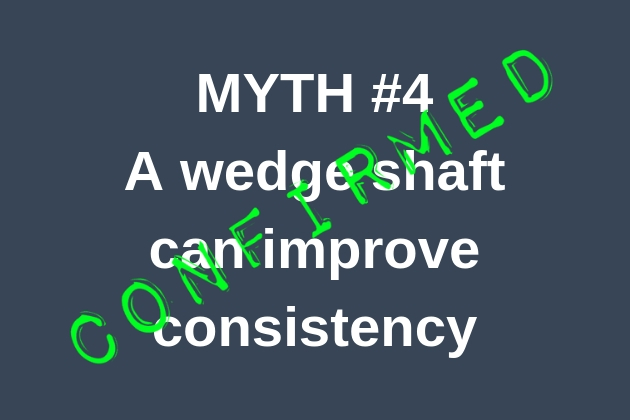 We looked at consistency across a variety of metrics – ball speed, launch angle, spin, and carry distance – and saw that shaft choice made a difference in every one.

With regard to launch angle, we saw that our best players could, given the right fit, hit all seven shots within a two degree window.  When given a poorer fit, that window doubled.  For the higher handicap players, we noticed the same pattern that we did with accuracy.  When given the right equipment, they were almost as consistent as our best players.  When they had the wrong shaft, the gap between their highest and lowest launching shots jumped to as much as eight degrees.

Our best players were equally impressive at controlling their spin rates.  With the right shaft, there was a difference of under 1000 RPM from their highest to lowest spinning shots.  With the wrong shaft, that shot up to over 2500 RPM.  The experience of our less-skilled testers was similar.

What was most striking was the difference that the shaft had on players’ ability to control distance.  Our three “average” testers were impressive with their best-fit shaft, keeping all shots within a range of 10 yards or less.  Given a poor fit, that range jumped to as much as 28 yards.  Predictably, our best players demonstrated excellent distance control with a well-fit shaft: all seven shots landed within five yards of each other.  However, they were nearly as impacted as our regular golfers by a poor fit: one posted a 26 yard gap between his longest and shortest shots. 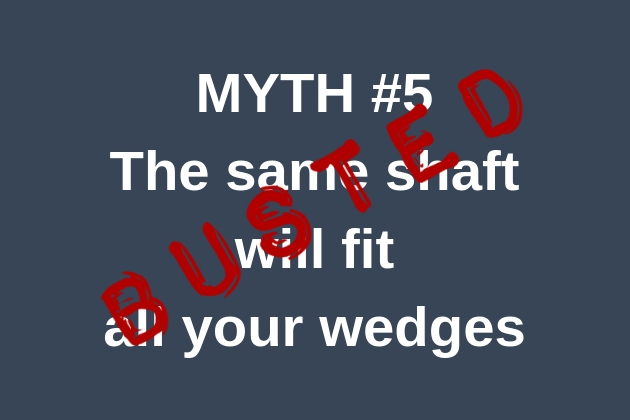 With all of the data gathered, we looked to see if players were getting the same results from each shaft for full and partial swings.  The answer: absolutely not.

While this was initially surprising, it makes sense on further consideration.  Different types of swings impact the shaft in different ways.  Thus, a shaft that creates the most spin on a full shot for a given player may produce limited spin on a partial shot.

This is not to say that finding the right shaft is hopeless, it just involves thought and maybe some compromise.  If your 60 degree wedge is never used for full swings, you should pick a shaft that performs well for you on partial shots.  If you use a wedge primarily as a full swing club, then fit to that.  Are you somewhere in the middle?  Find a shaft that gives you acceptable results in both arenas.

Everyone wants to see their ball dance on the green, so we buy wedges, shafts, and golf balls that promise loads of spin.  The reality is that you can’t expect consistent spin, let alone consistently high spin, without very consistent ball striking.  Our test group was comprised of above-average players, but there were still mishits.  On those shots, we watched the launch angle, spin rate, and carry distance jump all over the place.  If you’re not wearing out a spot in the middle of your wedge face, worry less about the ball you’re playing and more about improving your strike quality.

The gap in wedge play between a 10 handicap and a +2 is startling when you look at the data.  The idea that a skilled player can land all their wedge shots on a beach blanket really isn’t too far off.  While 10 handicaps are very respectable players, their games lack that magical word: consistency.

This does not mean equipment doesn’t matter for those players.  In fact, we saw that it matters even more for them because they’re less able to adapt.  The takeaway should be, as it is above, that you should work on your wedge game if you want to get to scratch or better.

As every player worked through the six shafts, I asked them what they were feeling, which shaft they liked, and which shaft was performing the best.  Keep in mind these players were seeing the results of each shot – ball flight and launch monitor numbers – as they went along.  Every player had a strong preference and was certain of which shaft performed best for them.  Not one was correct.

When we make our own equipment decisions, we bring loads of biases to the table.  A club fitter is a neutral party who can remove the emotion from the equation and put the focus on performance.  Find a fitter you trust and let them guide you to the best equipment.

Do wedge shafts matter?  Only if you want to hit the ball near the pin.  We found that, regardless of ability, the right wedge shaft can produce more consistency, higher spinner, and tighter dispersion.  So if you’ve never given any thought to what’s in your wedges, it’s time to make an appointment with your club fitter and upgrade your short game.