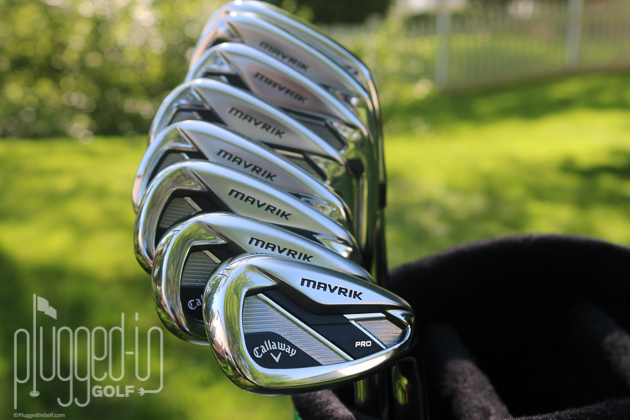 The Callaway MAVRIK Pro irons have impressive forgiveness and consistency for their size.  Good looking clubs with excellent feedback. 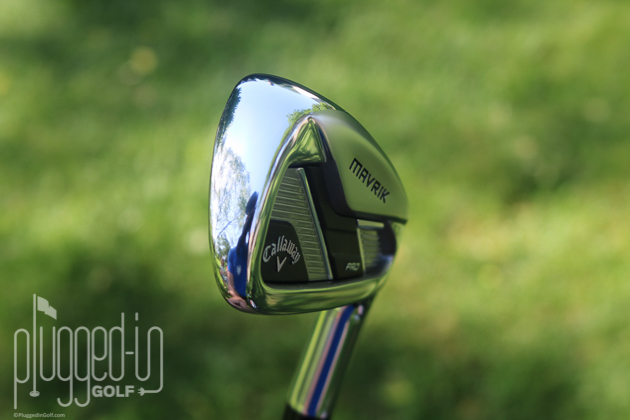 One of the most popular questions we get at Plugged In Golf is, “When should I switch to players irons?”  Most golfers assume that when they transition to a slim-looking club, they’re going to give up on forgiveness, so they put off making the move.  With the MAVRIK Pro irons, Callaway packs a ton of technology into a good looking club which will help more golfers play an iron they love to look at. 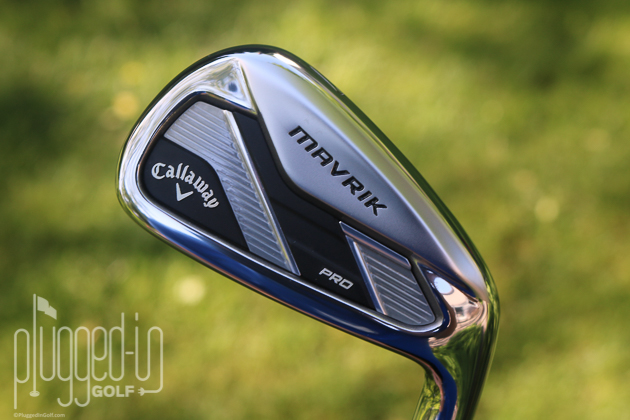 Having tested almost the entire MAVRIK line prior to hitting these irons, what I noticed first was the lack of orange.  For the skilled player, Callaway has given the cavity a more classic look with a black and silver color scheme.  An interesting mix of textures keeps the club from looking dull in the bag. 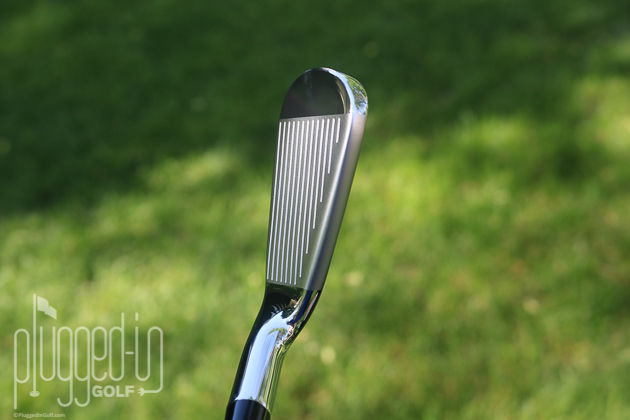 At address, the top line is fairly thin, and the head is smaller than average from heel to toe.  The combination of matte and chrome on the face makes the club look a bit smaller, and the modest offset should be acceptable to good players. 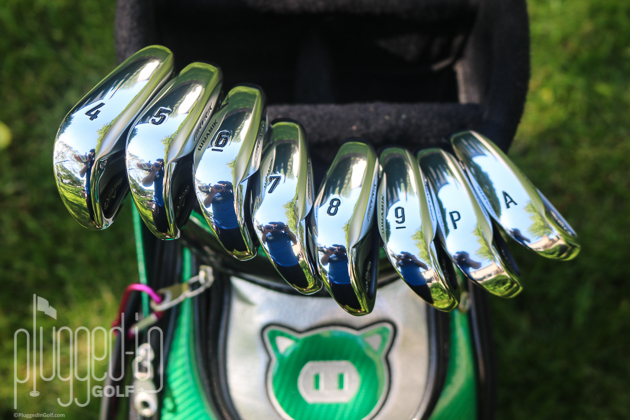 What stood out most to me about the Callaway MAVRIK Pro irons is the amount of feedback.  Callaway has put a lot of emphasis on the urethane microspheres in the club head that are designed to absorb unwanted vibration.  This led me to fear a lack of responsiveness in the Pro model, but I was wrong.  On center, the MAVRIK Pro feels very soft.  That feel firms up very noticeably when you miss the center.  The microspheres keep the misses from stinging or feeling harsh, but any player will be able to tell the difference between pure contact and mishits.

In terms of sound, the MAVRIK Pro irons are a little louder than most players irons.  They’re not problematically loud – no one will confuse them for a distance iron – but if you need a near-silent “thud,” these may not be for you. 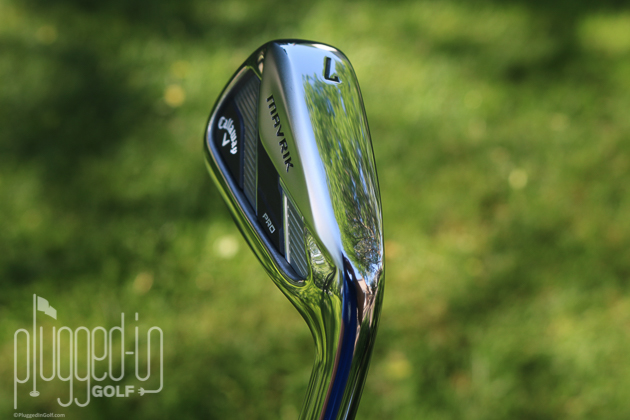 Each iron set in Callaway’s MAVRIK family was designed for a different type of player.  Where the MAVRIK MAX irons [review HERE] wowed me with their ball speed and consistency, the MAVRIK Pro irons are geared toward the player who prizes control over distance.

In my testing, I found that the MAVRIK Pro irons delivered good, but not outrageous, ball speed.  A small part of that is due to their lofts which are the weakest in the MAVRIK iron line up.  While the top end distance is not as impressive, I was very pleased with how much forgiveness Callaway packed into a fairly compact head.  This iron has a great performance profile for the golfer who is improving but doesn’t want their mishits to land 30 yards short of the green. 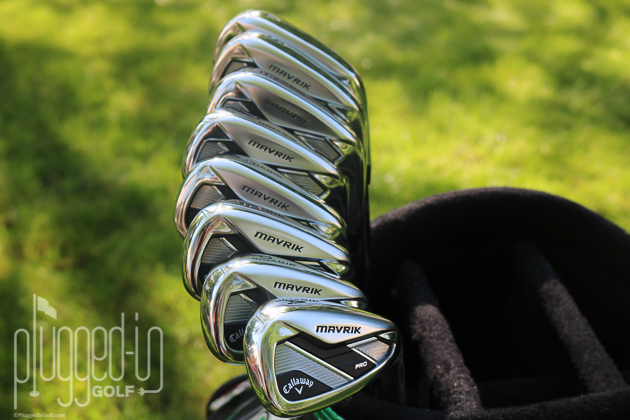 Another attractive distance-related trait of the MAVRIK Pro irons is their gapping.  As a low launching player, I often find that iron sets get bunched up at the top end of the set, meaning that the 3, 4, and 5 irons don’t have meaningful gaps between them.  For me, each MAVRIK Pro iron had a 10-12 yard gap to the next all the way from 4I through the gap wedge.  This makes constructing your bag and pulling the right club much easier.

Finally, another characteristic that will make the MAVRIK Pro attractive to the good or improving player is that it’s fairly low spin.  That low spin translates into straighter shots.  If you want a players iron look but are happy to leave the big fades and draws to Bubba, this is a great iron. 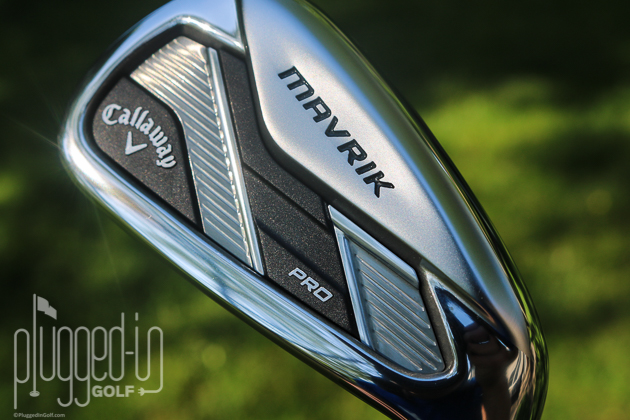 Golfers often look at irons in a binary sense – it’s either forgiving or for better players.  Callaway’s MAVRIK Pro irons show that to be a false dichotomy.  These clubs deliver a very attractive look and shot control while offering impressive forgiveness and consistency. 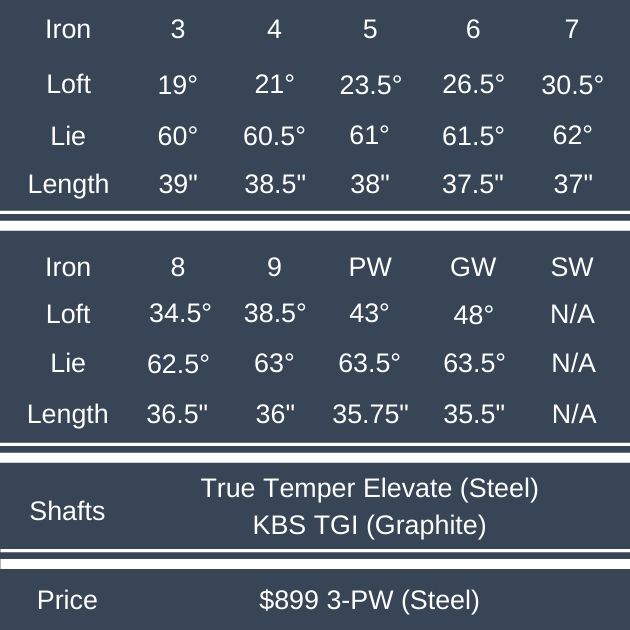