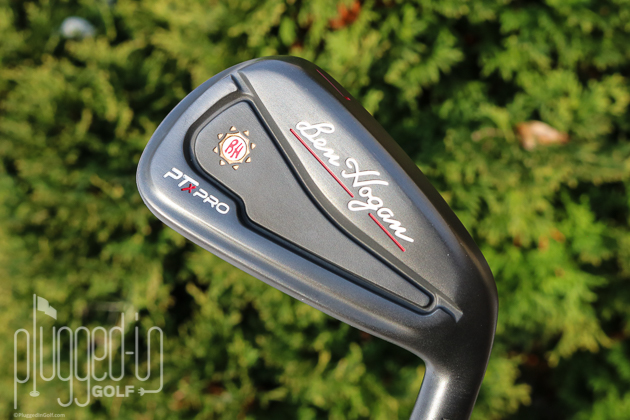 The Ben Hogan PTx PRO irons have a classy look and a wealth of unique performance attributes.  Best suited to golfers with moderate to good ball striking ability. 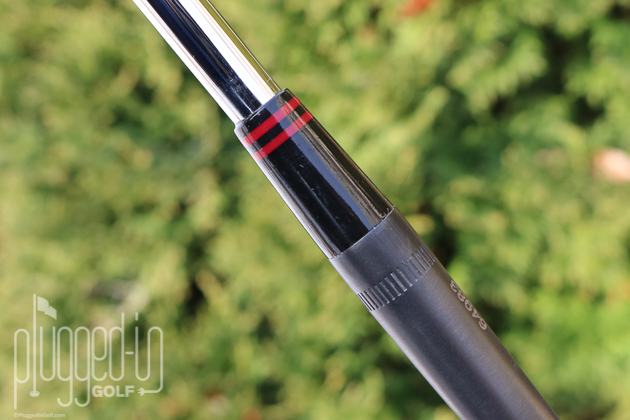 In today’s iron market, there are more categories than ever.  Game improvement, super game improvement, players iron, players distance irons…the list goes on and on.  The Ben Hogan Golf Equipment Company isn’t interested in labels or in competing to see who can make the longest 7-iron.  Their aim was simply to create a high performance iron that blends a traditional look with the advantages of modern manufacturing techniques.  The result is the PTx PRO irons. 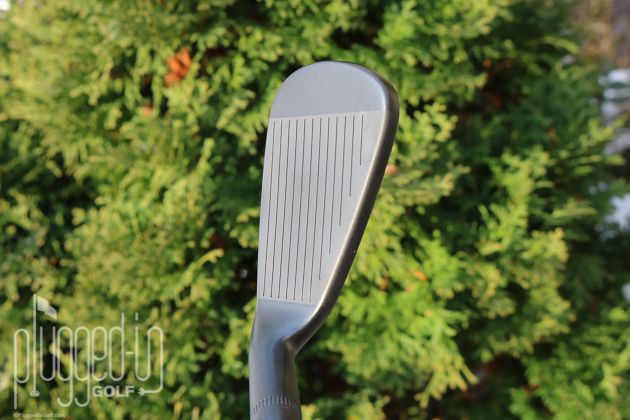 The timeless logo of the Ben Hogan Golf Equipment Company looks perfectly at home on the back of the PTx PRO irons.  In the bag, these irons have a traditional look – shallow cavity, moderate size, and modest branding.  There are also some nice aesthetic details like the ringed ferrule and the proprietary blue/grey grips.

At address, the PTx Pro looks compact from heel to toe.  Its top line is thin for a game improvement iron, a touch thick for a players iron.  The amount of offset swings rather dramatically throughout the set.  In the 8-PW, there is very little offset.  The 6I and 7I have an amount of offset you’d expect in a players iron.  When you get to the 4I and 5I, the offset becomes quite noticeable.

For those familiar with the Ben Hogan line, the PTx Pro has a slightly larger face, wider sole, and more offset compared to the original PTx irons.  You can find a review of the original PTx HERE.

The Ben Hogan PTx PRO irons are available in two finishes.  Pictured here at the PTx PRO Black irons, which use a proprietary “Diamond Black Metal” finish.  This dark finish looks great, reduces glare, and improves contrast with the ball.  The company states that their finish is more durable than other dark finishes and adds no weight to the club head.  For those that prefer a traditional look, there is also a nickel-chrome finish. 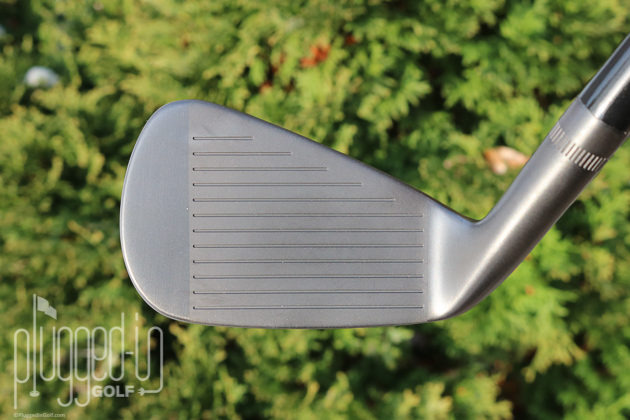 The PTx Pro irons have a wonderful blend of old and new in their sound and feel.  From the sound alone, you would guess that this is an old school iron.  Impact produces a mid-pitch, crisp “snap.”  There’s nothing in the sound that hints at modern club construction.  The feel, however, has a dash of the explosive feel that comes with most new, thin-faced irons.  It’s really the best of both worlds.

One area where I was underwhelmed was the feedback.  There’s a clear difference between pure strikes and mishits – misses feel dull – but it’s hard to know exactly where on the face the ball was struck or how extreme the miss was. 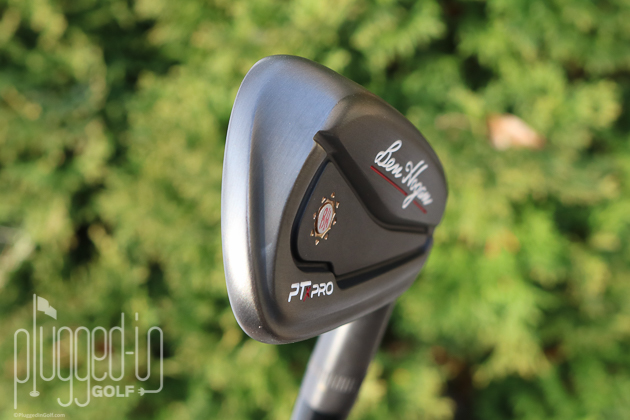 Ben Hogan Golf Equipment Company states that their irons defy category, and I think that’s a fair claim.  The PTx PRO has a wealth of interesting features, but the combination defies easy categorization.

The most interesting technology in the PTx PRO irons is invisible to the golfer: the three-piece forging.  In the long irons, each club has a 1025 carbon steel body, a separate forged face, and tungsten weighting.  Tungsten is used to balance the club and promote higher launch with more spin.  In the short irons, the tungsten is replaced with titanium to give players better distance control and fight ballooning trajectories.

Another reason for the different materials is to create a linear center of gravity (CG) throughout the set.  Most modern sets have a higher CG in the short irons and a lower CG in the long irons.  The manufacturer infers that the linear CG makes the set more consistent and predictable for the golfer. 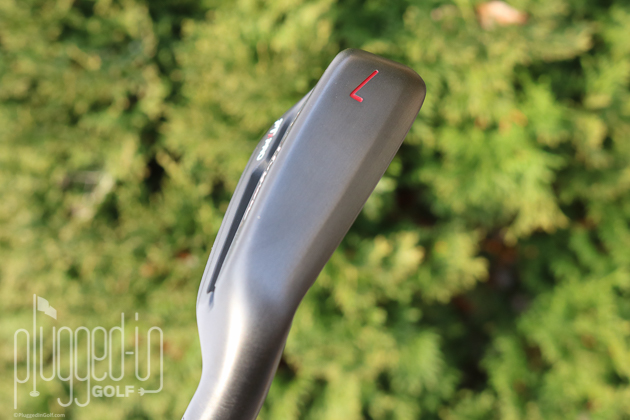 In my testing, the linear CG performed mostly as I expected.  The short irons launched fairly low with moderate spin.  The PTx PRO mid irons were similar to most other player-ish irons in terms of launch and spin.  I was concerned that the long irons would launch exceedingly low, but I was pleasantly surprised at the ball flight.  These are not high launching long irons, nor are they very forgiving of thin shots, but well struck shots got plenty of distance.

The PTx PRO creates ball speed that is more than adequate but short of today’s best hollow-body irons.  Similarly, the forgiveness is adequate for a mid-handicapper, but it’s not equivalent to the larger game improvement irons.

Finally, one of the hallmarks of recent Ben Hogan golf clubs is the V-Sole.  A quick glance at the sole makes it clear where the name comes.  There is a thin section of high bounce near the leading edge and a wider area of low bounce leading to the trailing edge.  As I’ve noted in previous reviews, this is a wonderful design.  It gives the golfer all the versatility of a thin sole with the forgiveness of a much wider sole. 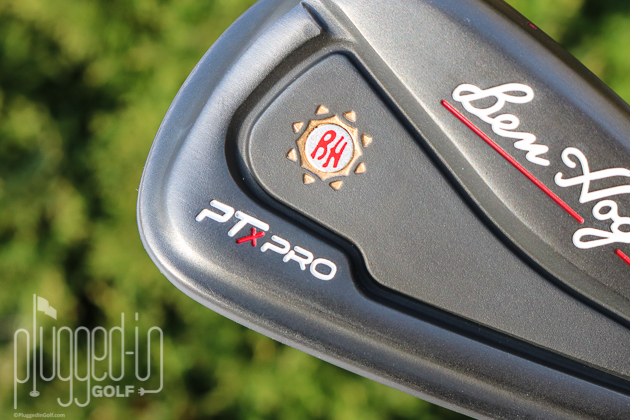 The new Ben Hogan PTx PRO irons are a refreshing change of pace.  They don’t have a four figure price tag, they don’t have uber-strong lofts, and they don’t make outrageous performance claims.  This is a very solid set of irons for the mid-handicap or better golfer.  The only drawback to the direct-to-consumer model is that you can’t try them before you buy except through their demo program (details HERE). 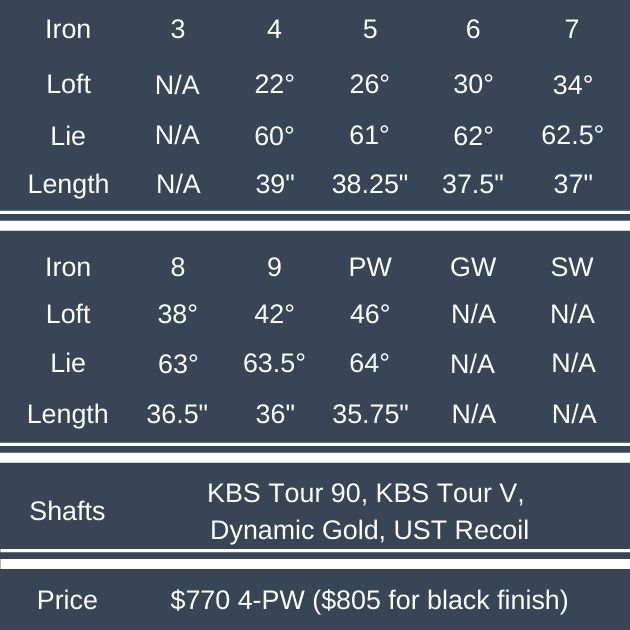