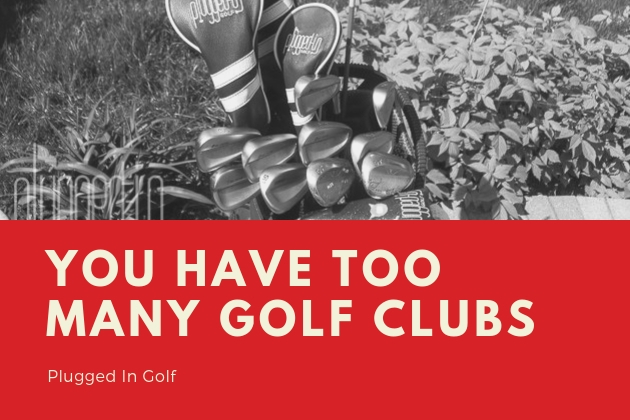 No, This Message Isn’t From Your Spouse

In the past, I’ve recommended fewer clubs for fun, challenge, skill development.  Today is about scoring and use of limited practice resources.  If lower scores – and potentially saving money – are appealing to you, read on.

You want to shoot better scores

You want to hit more good shots on the course 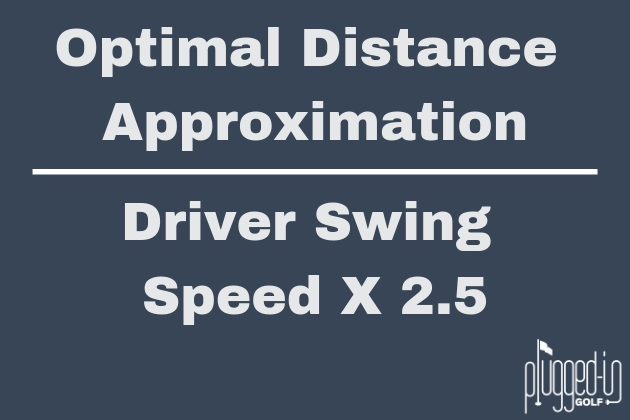 Let’s start with a general guideline about distance.  The established rule of thumb is that for every MPH of driver swing speed you have, you can get 2.5 yards of carry if you’re fully optimized.  For those that don’t do math, that means an 80 MPH swinger’s best drive will carry 200 yards.  At 90 MPH you can top out at 225 yards; at 100 MPH, it’s 250 yards.  How much roll you get from there depends entirely on where you play.

Every player is going to have different numbers for their driver potential and favorite iron distance, but I’m going to walk through two possible scenarios to illustrate the concept. 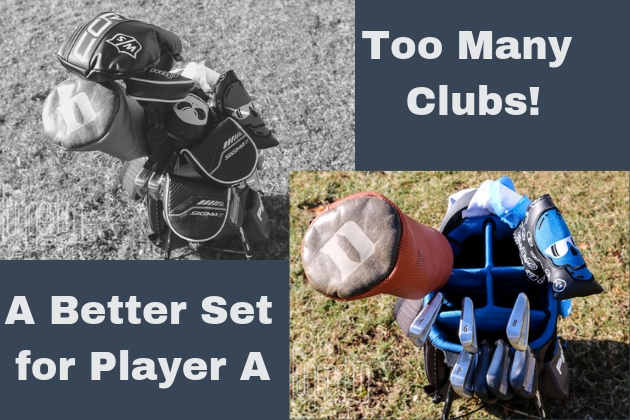 Distance Gaps & Filling Out the Set

Before I walk through these players’ new set ups, I want to establish a rule: you need at least 10 yards of carry distance between clubs.  There is no point in carrying a club that goes 150 and another that goes 155.  I’ll explain the why behind this later.

This golfer has a 60 yard gap between their favorite iron and their driver.  This leaves room for five more clubs, but, unless this player is a ball striking wizard, it will probably be three.

Start by finding a club that goes as far as possible off the turf.  This could be a hybrid or a FW, depending on the player’s preferences.  Let’s assume it’s a 4W that goes 190 yards.

At 80 MPH, there’s little chance that this player can make use of a modern 4I or 3I, so, if they want another club, it will be a hybrid or FW designed to carry between 165 and 190 yards.  That may seem like a big gap, but, if we’re being realistic, very few players have much distance control with long clubs.

To fill out the lower portion of the bag, we’ll just try to create 10 yard gaps.  Experience tells me that Player A’s 8I is not 10 yards shorter than the 7I, so we’ll skip to the 9I.  We can also probably skip from the 9I to the Gap Wedge.  We will probably add two more wedges – 54, 58 or 55, 60 – to give the player some options around the green. 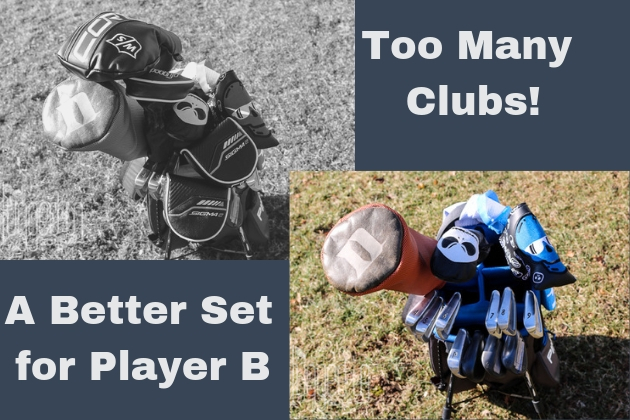 This golfer is likely to have more clubs because of his speed.  If he’s a reasonable ball striker, he’ll likely carry a “full” set of irons – let’s say PW through 5I.  At 100 MPH, he’s borderline on the modern 4I.  As a guideline, I’d suggest a 10 handicap or better can make it work.  We’ll assume he’s a 15, so he stops at the 5I.

Player B now has three open spots and a 60 yard gap between his 5I and his best drive.  I would strongly suggest that he leaves at least one unused.  Get a FW or hybrid that goes as long as possible and something that can carry 205 yards with some consistency.

Why not bag another club?  Because, as a 15 handicap, it’s unlikely that he’s going to find anything he can reliably hit 220 in the air.  In fact, 220 may be the reality of his “as long as possible” club.

The Benefits of Fewer Clubs

Be Better With What You Have

None of us get to practice as much as we want.  For most of us, it’s a victory if we get to the range once a week.  Are we going to get much better dividing our 50 practice swings over 14 clubs?  Absolutely not.  By removing unnecessary clubs, we devote more practice time to the clubs that matter.

While we are improving our skills with these clubs, we are also getting to know them better.  When we know our tendencies with each club, we can implement better course management and shoot lower scores.

Part of the logic behind bigger distance gaps between clubs is that it helps us make smarter decisions.  If I have a 150 yard shot, and I’m carrying one club that goes 155 and one that goes 148, I’m likely to try to smash the 148 club.  If my choices are a 155 club and a 140 club, I’m improving my chances of making the smart decision and hitting the 155 club.

Additionally, when we have fewer choices we will experience less decision fatigue.  Golf is a mental game, and we should take advantage of anything that reduces mental stress.

Finally, buying fewer clubs means spending less money.  Particularly for Player A, the savings are substantial – he’s buying half as many irons!

Though many people don’t realize it, this kind of club buying is available to every golfer.  Whether you shop at a high end club fitter, a big box, or online, you can order the exact set make up that you want.

Save some money, lighten your load, and shoot lower scores.  Carry fewer clubs.