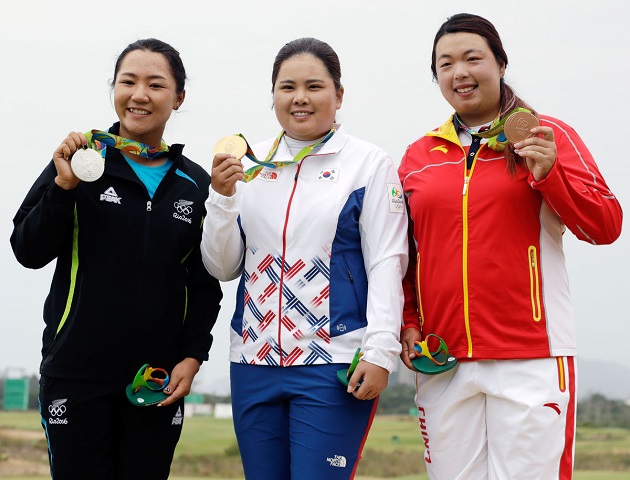 South Korea’s Inbee Park got back in the winner’s circle in a big way this weekend, capturing the Gold Medal in the Women’s Golf competition at the Olympic Games in Rio De Janiero, Brazil.  The event, held at the same venue as the Men’s tournament last week, saw Park dominate from the first round, and carry her exceptional play throughout the week.  The tournament was Park’s first tournament since early June at the KPMG PGA, with her season plagued by a thumb injury that set in during this passed off season.  After sitting out for a few months, Park showed no signs of rust, opening with a 5-under 66, her first sub-70 round since April of this year.  Park followed up her stellar second round with yet another 66, putting her at 10-under after the first two rounds and heading in to the weekend with a one-shot lead over American Stacey Lewis, who fired an impressive 63 on Friday.

Park had a much less impressive 1-under finish on Saturday, but still managed to increase her lead to 2 strokes.  Stacey Lewis fell off of her Friday pace, following up her 63 with a 5-over 76.  Heading in to the final round, it looked like PXG Staffer Gerina Pillar was the best hope for a medal for the United States, sitting 2 back of Park.  Tied with Pillar going into the final day of the tournament was World Number One Lydia Ko of New Zealand, who catapulted in to contention with a third round 65.  On Sunday, Park took her two shot lead, and never looked back.  Pillar fell off the pace early, and Ko could not keep up with Park’s fast start.  Park rattled of three straight birdies at the third through fifth holes, and closed out her front nine at 4-under par.  The back nine was cruise control for Park, who just needed to maintain her consistent play.  By the time she stepped to the tee at the par-5 18th, she had all but sealed the deal, sitting with a three shot lead.  Park found the green in three on the par-5, and had an easy two putt to cruise to victory, and the first gold medal awarded in Women’s golf at the Olympics since 1900.  Lydia Ko won the silver medal for New Zealand after making a birdie at 16 and then a huge up and down at the 18th for birdie to avoid a silver medal playoff.  China’s Shanshan Feng captured the bronze.  Stacey Lewis was the high finisher for the United States, finishing one shot behind Feng at 9-under par.

Similar to the medal winners from the Men’s tournament, Park was elated after her victory.  Leading up to the tournament, Park had frequently expressed what participating in the event would mean to her, and while she even missed LPGA Majors due to injury, she made sure she was back for the Olympics.  Park was clearly ready, and put on a display of golf similar to what we have come to expect from the former World Number One.  Park, the youngest person to ever be inducted into the golf Hall of Fame, even stated that winning the Olympics might be the “highlight of her career.”  We will see if she can carry this momentum through the end of the 2016 season, and on to next year, but regardless of what happens in the future, Inbee Park will always be considered an Olympic Gold Medalist. 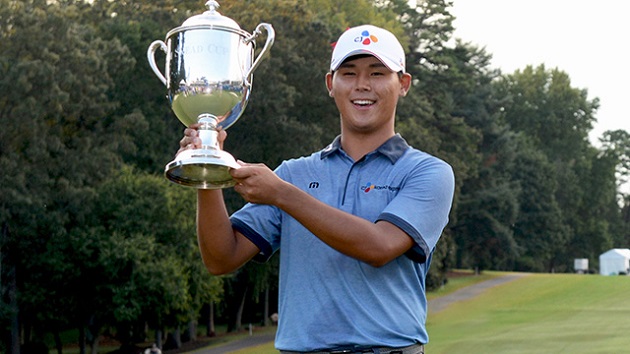 Si Woo Kim continued a great week for South Korea, capturing the Wyndham Championship as Greensboro, North Carolina’s Sedgefield Country Club.  Kim finished off his 21-under par week with a closing round 67 on Sunday, giving him a 5-stroke victory (similar to Inbee Park’s win at the Olympics this week) over Mizuno staffer and Former World Number One Luke Donald.

Kim started the week with a 2-under 68 on Thursday, but Friday is where he made his move to the top of the leaderboard.  The 21 year-old Kim broke the course record in the second round, firing off a bogey-free, 10-under 60, which included eight birdies and an eagle.  Kim didn’t stop his stellar play on Friday, however.  For Saturday’s third round, known to many as “moving day”, Kim shot a 6-under 64, complete with seven birdies and one bogey.  Kim slept on the lead, and entered the final round with a four stroke lead over Spainard Rafa Cabrera-Bello, and in great position to capture his first ever Tour victory.

While Kim had a close call at the Barbasol Championship last month, but was ultimately unable to seal the deal, this was not the case this week.  Kim made four birdies on the front nine Sunday, setting him up to cruise to victory on the back.  Kim finally showed some signs of being human on the final nine, possibly letting the nerves get to him, when he carded bogeys at the 10th, 13th, and 14th holes.  On the par 5 15th, Kim bounced back with a birdie, and put himself back in a comfortable position with a 4-stroke lead with three holes to play.  When Kim stepped up to the 17th tee, Mother Nature decided to intervene and put a hold on Kim’s celebration, but that didn’t take anything away from his moment.  After an hour delay, Kim bounced back to make a par at the 17th, and then put an exclamation mark on his week, nailing a thirteen foot birdie putt to seal his victory.

The victory is the first ever win for Kim, but this isn’t a new thing in 2016.  Kim is the 17th first-time winner on Tour this year.  Not only does he join an elite group of players to ever win an event at the “big time,” but he did so at the ripe young age of 21, making him the youngest player to win on Tour since a guy named Jordan Spieth got his first ever win at the John Deere Classic.  While this may be the first time Kim has gotten the sweet taste of victory on Tour, I doubt it will be his last. 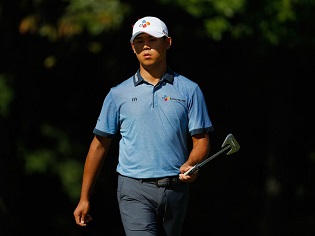