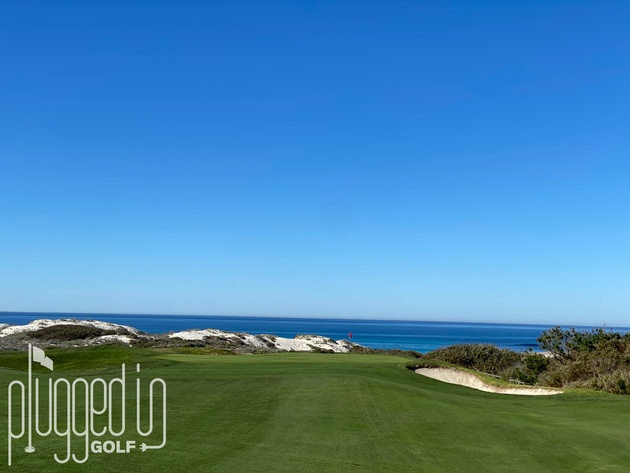 The Links at Spanish Bay is located on 17 Mile Drive in Pebble Beach, California.  Beautiful coastal views throughout the round.  Very demanding of your iron play and short game. 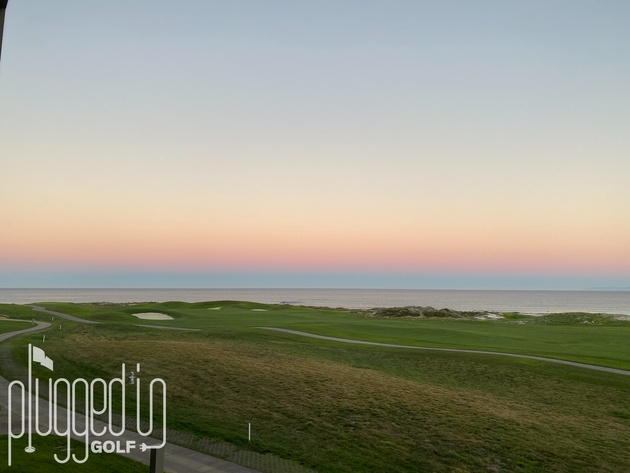 The Links at Spanish Bay is the youngest course at Pebble Beach.  Opened in 1987, it was built well after Pebble Beach Golf Links [review HERE] and Spyglass Hill [review HERE] had established themselves as some the finest courses in golf.  Though they had large shoes to fill, co-designers Robert Trent Jones, Jr, Tom Watson, and Sandy Tatum also had a significant advantage: a world-class location.  Built on a former sand-mining operation with near-constant views of the Pacific Ocean, they had the perfect spot for a links-style course. 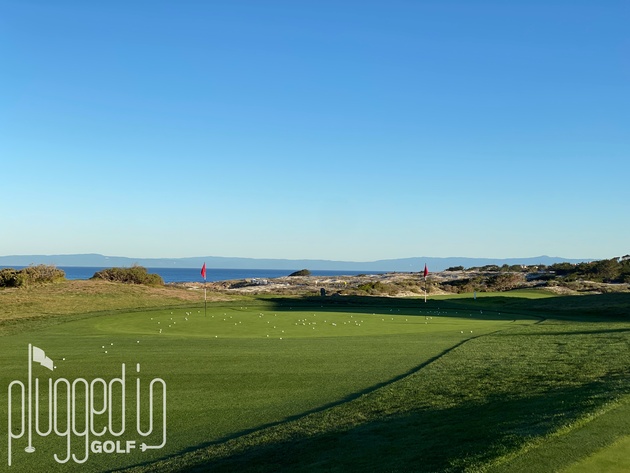 The Links at Spanish Bay has a large putting green – big enough for six to eight golfers – and a pitching green with room for two or three players.  There is no driving range at Spanish Bay.  If you want to hit balls before your round, you’ll need to head to Spyglass Hill or Pebble Beach.  If you’re staying on the property, there’s a complimentary shuttle that runs between the courses twice an hour. 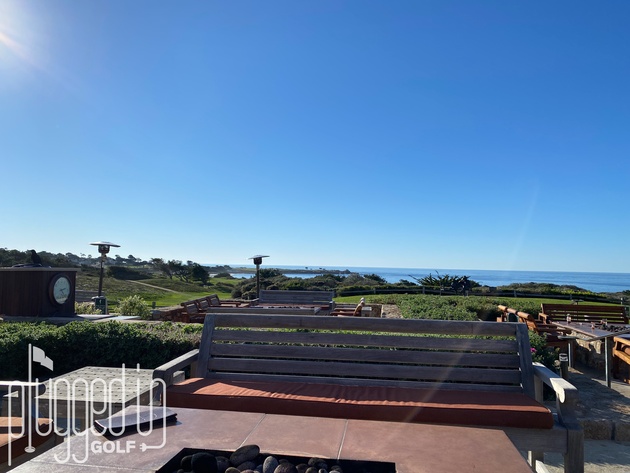 The Links at Spanish Bay shares a large, modern clubhouse with The Spanish Bay Club, a pool and fitness center.  Inside, you’ll find a sizable pro shop full of all the souvenirs you could imagine.  Next door to the pro shop is Sticks restaurant, which also has outdoor seating with views of the first hole and the Pacific Ocean.

Within walking distance of the first tee is The Inn at Spanish Bay.  This is where I stayed on my trip, and I cannot say enough about good things about it.  It offers a wealth of dining options from casual fare to Italian to Hawaiian Fusion to a wine bar.  The service is off the charts and only topped by the views. 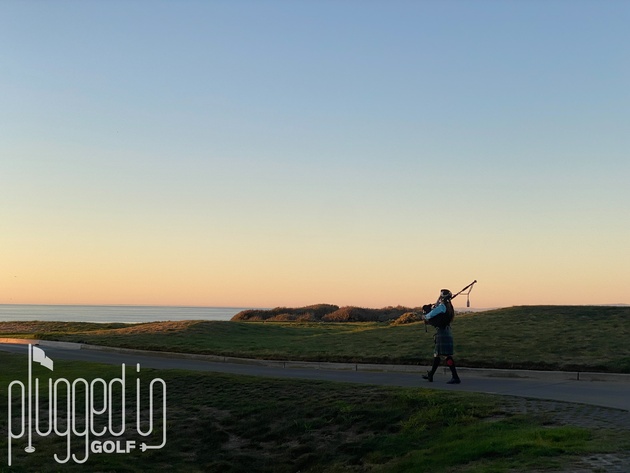 The Links at Spanish Bay is also home to a lovely evening tradition.  Every night around sunset, a bagpiper stands on the first tee and plays to close out the day.  They play as they march down the first fairway, ending at The Inn at Spanish Bay.  Even if you don’t care for bagpipe music, sitting by a firepit and watching the sunset is an unforgettable part of any Pebble Beach vacation. 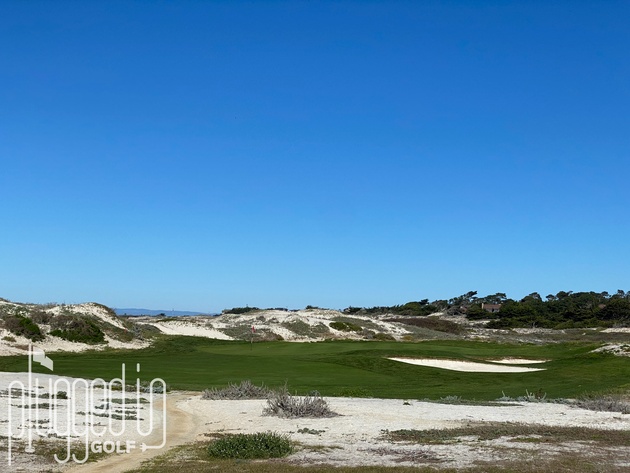 The majority of The Links at Spanish Bay is right on the Pacific Ocean.  There are places on the course where you could literally throw a rock onto the beach.  The views are some of the best you’ll find, and the rhythm of the round helps you to appreciate them even more. 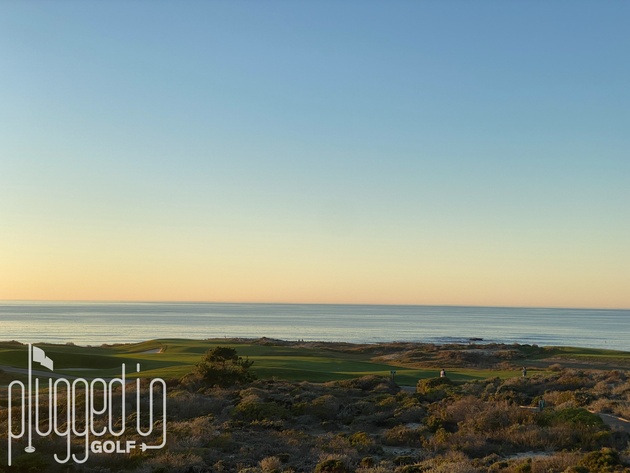 After playing the first eight holes on or near the water, the course turns inland.  Holes #10-#12 are a visual change of pace at just the right time.  In fact, I think #12 is one of the prettiest holes on the course.  When you step into your approach to the short par 3 13th, you’ll see the Pacific in the distance.  #14 plays back to the coast where you’ll stay for the rest of the round. 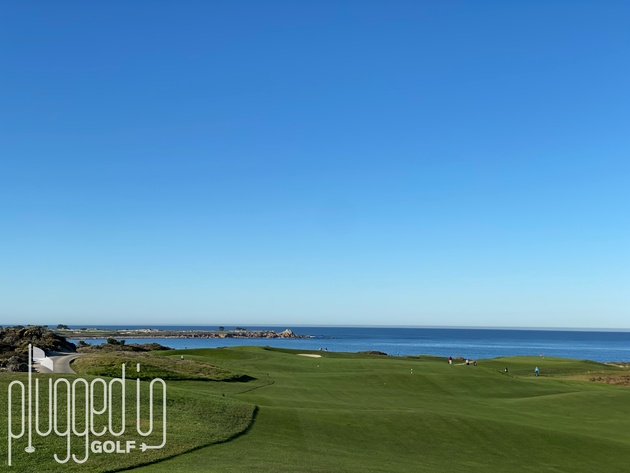 I rarely play the tips, but when I saw that Spanish Bay tops out at 6,726 yards, I thought, “Why not?”  Then I saw the sign on the starter’s stand which suggested that only plus handicaps play those tees.  I moved up to the gold tees (6,415 yards) which were recommended for my handicap and driving distance.  I’m glad that I did.  The tee recommendations are not just about your driver length; they’re also about your accuracy.

If you’re playing the tees recommended for you, the Links at Spanish Bay does not have more than one or two holes where you can comfortably hit a full driver.  Several holes will completely take it out of your hands with doglegs or hazards.  The others will test your nerves with narrow fairways and tough angles. 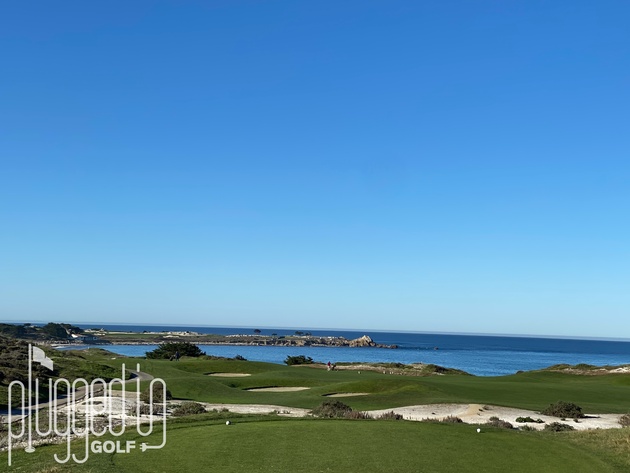 A final word on the tee recommendations.  If you can’t consistently carry your drive 200 yards, play the green or red tees.  From the white tees (6,002 yards), there are numerous holes where the ball needs to carry about that far to make the fairway.  The two gentlemen I played with chose the white tees but were consistently coming up short of the fairway.  Because of this, they never had a chance to make a par.

With all this talk about picking the right tees, you might think that The Links at Spanish Bay is all about great drives.  It’s not.  Hitting the appropriate tee shot is required on most holes, but there are few opportunities for great drivers to create big advantages.  The drive is merely the table setter for the real star of the show, the approach shot. 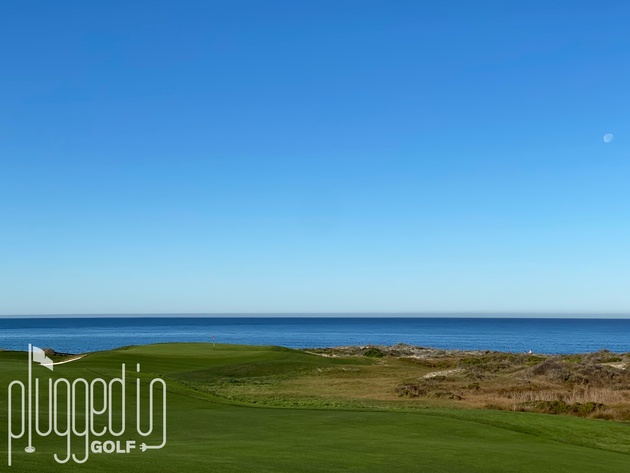 With “Links” in the name, you can rightly expect that the fairways at Spanish Bay are not made for flat, driving range lies.  Though some holes keep the undulation fairly mild, there are holes where being on the wrong side of a swell means not being able to see the green.  Not only will the mounding affect your sight lines, it also produces some extreme lies.  Be prepared to adjust your aim and stance accordingly.

The next layer of difficulty is that the greens themselves are slightly below average in size.  Additionally, most are elevated.  Finally, because of tiers, thumbprints, and false fronts, most of the greens at Spanish Bay play smaller than they are.  In sum, you need to be very accurate with your irons if you’re going to score well. 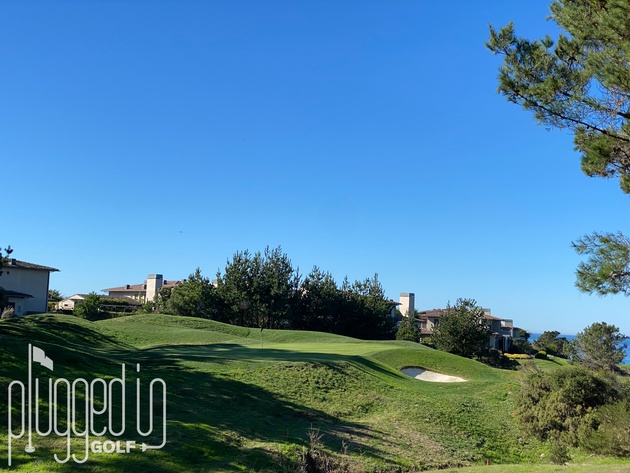 One thing working in your favor is that the greens are not aggressively bunkered.  There is typically just one bunker defending each green, so you can play away from it if you fear the sand.  Some of the greenside bunkers are quite deep, so avoiding those should be a priority.

Finally, The Links at Spanish Bay favors aerial approaches.  There are several reasons for this.  First, a few holes have ravines or other hazards separating your tee shot from the green.  Second, the fact that the greens are elevated makes running the ball up more difficult.  Finally, though many greens do have a strip of fairway running to them, the course does not play particularly firm or fast. 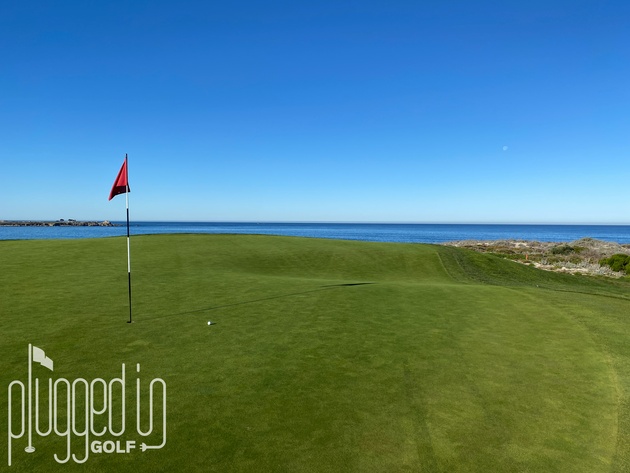 With so much difficulty just getting onto the green, you might think that putting would be easy.  That’s not the case.  The Links at Spanish Bay has some of the tougher greens in recent memory.  I’ve often noted that a course may not have many straight putts.  At Spanish Bay, not only are there very few straight putts, there are even fewer flat putts.  This means that not only do you need to deal with the breaks across tiers and massive thumbprints, you also need to correctly judge the speed.  Take plenty of time on that practice green or you will rack up a boatload of three putts. 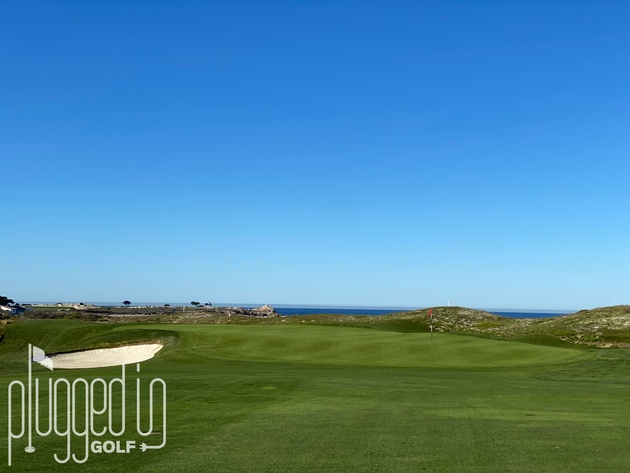 While hitting the green doesn’t guarantee a par, it’s a lot better than missing the green.  Even though these surrounds are not heavily bunkered, you can find plenty of trouble.  The rough is thick, and there’s substantial mounding and elevation changes around most greens.  You will need a first class short game to save many pars at The Links at Spanish Bay. 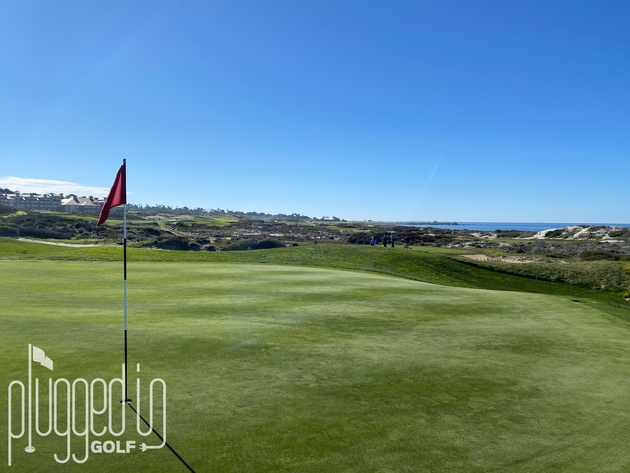 The Links at Spanish Bay requires you to be dialed in with every club in the bag.  Off the tee, you need to put the ball in the right spot.  You don’t need overwhelming power, but poor shots can get punished pretty severely.  Hitting the green is not easy, and, if you want to make birdies or easy pars, you need to hit it close.

Though this is a challenging course, there are not many hidden tricks.  For the most part, the right play is fairly obvious as are the hazards. 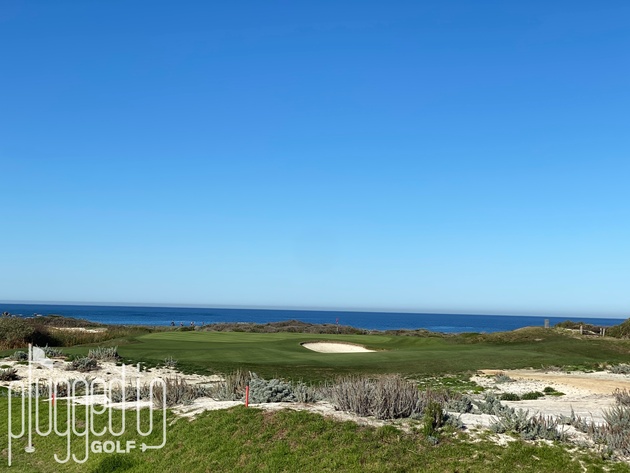 One final word of advice to first time players is to be extremely observant before each shot.  There are spots on the course where you can lose a ball with a shot that isn’t terrible.  These hazards – often over greens or in certain spots off fairways – are plain to see, but you won’t know to play away from them if you’re staring at your target.  Take the time to evaluate everything, and you’ll keep the doubles and triples away. 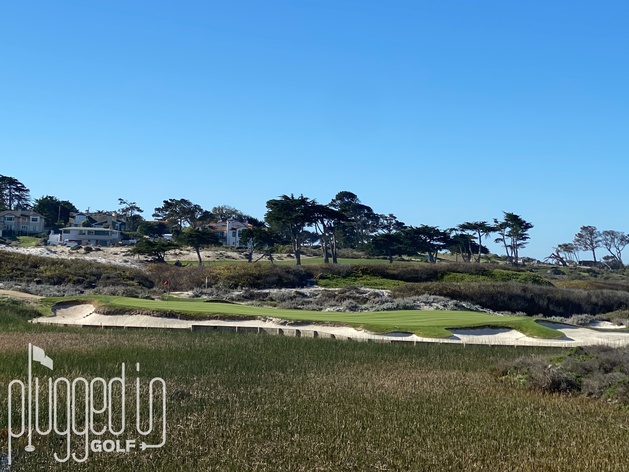 Called “Blind Choice,” this hole forces you to choose between hitting your tee shot to a large, visible fairway to the left or to a largely unseen fairway right.  Playing it safe leaves a very long approach, so I suggest taking this opportunity to crush a big drive right of the fairway bunkers.  The green is very wide and two-tiered on the right side.  Even after a great drive, par should be celebrated.

This mid-length par 3 is essentially an island green.  Your tee shot needs to carry a marsh to get to a green that’s ringed in sand.  This is one of the holes closet to the water, so your distance control will be challenged by the ocean breeze. 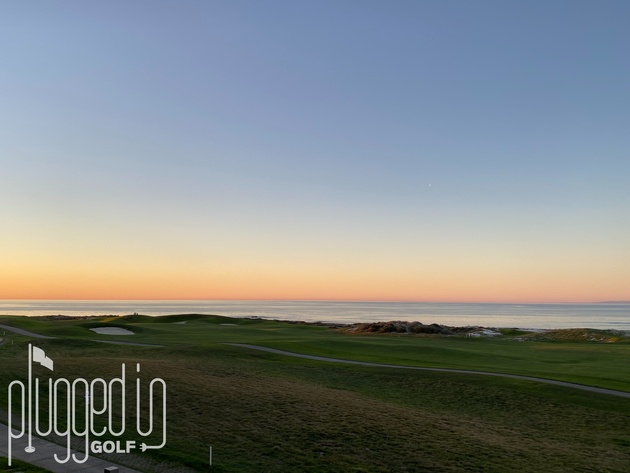 Rounding out a trio with Pebble Beach and Spyglass Hill is a daunting task, but The Links at Spanish Bay does an admirable job.  While I expect most golfers will pick one of the other two as their favorite, Spanish Bay offers a golf experience that is unique from the other two both visually and in terms of play.  If you have the good fortune of golfing on 17-Mile Drive, make the time to include a round here.