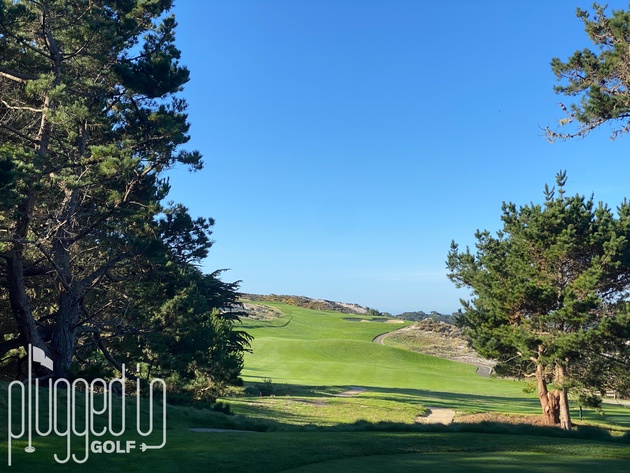 Spyglass Hill Golf Course is the toughest course on 17 Mile Drive.  One of the most stringent ball striking challenges you can find.  Relentless but beautiful. 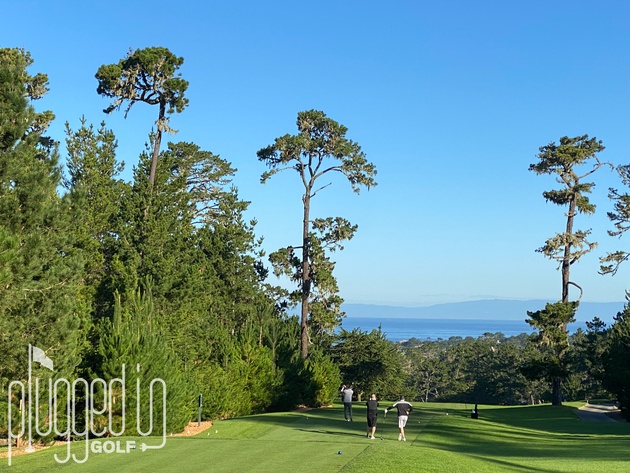 Spyglass Hill holds a special place in my heart.  It was the first top tier golf course that I ever played, 15 years ago on my honeymoon.  Since then, I’ve checked many courses off my bucket list, but Spyglass has maintained its position on my list of 5 Forever Courses [see the full list HERE].  Recently I got to return to Spyglass, and I found that it’s even better than I remembered. 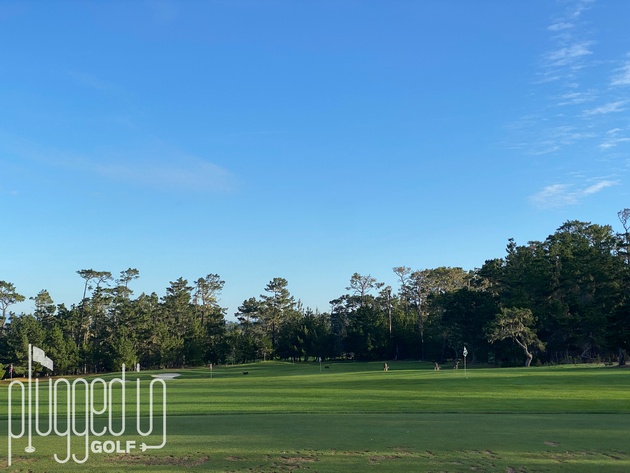 Spyglass Hill gives you the opportunity to work out every aspect of your game before you start your round.  There’s a large driving range that’s just a few steps from the first tee.  The range can accommodate about 15 golfers hitting off grass or mats, depending on the day.  The most unusual thing about the range is the herd of deer that graze in the middle of it, totally unfazed by the blizzard of golf balls being fired at them.

Alongside the range there’s a short game area with a practice bunker.  Though the practice bunker isn’t nearly as deep as most that you’ll find on the course, it’s still worth getting a feel for the sand.

Finally, there’s a putting green behind the first tee.  It’s a large green with room for six to eight players, and it mirrors the speed and subtle breaks of the greens on the course.  Do your best to get your sea legs here if you want to make some putts on the course. 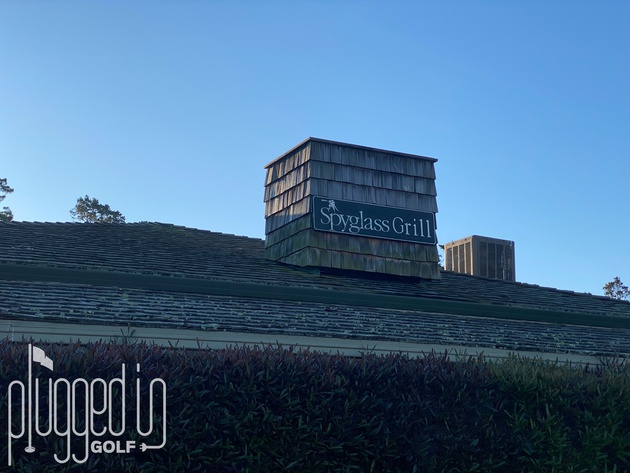 Spyglass Hill has the most “pure golf” feel of the public courses at Pebble Beach.  Both Pebble Beach Golf Links [review HERE] and The Links at Spanish Bay have massive clubhouses and hotels.  Spyglass has an unassuming one-story pro shop and the Spyglass Grill across the street.  Both are excellent, but they’re low key and golf-centric in a way that the others simply aren’t.

As with all the Pebble Beach golf courses, the customer service is outstanding.  The starter was extremely personable and did a phenomenal job getting groups paired up and ready to play on time.  At the end of the round, two staff members clean your clubs and your shoes before handing over your souvenir bag tag. 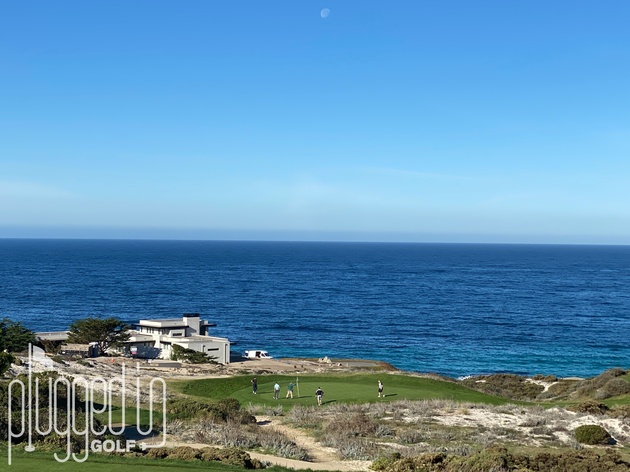 The knock on Spyglass Hill is that after the first five holes, you never see the ocean again.  To me, this criticism misses the forest for the trees.  Spyglass Hill has five jaw-dropping oceanfront holes.  That’s five more than the vast majority of golf courses in the US.  We should appreciate their majesty, not complain that they aren’t more numerous. 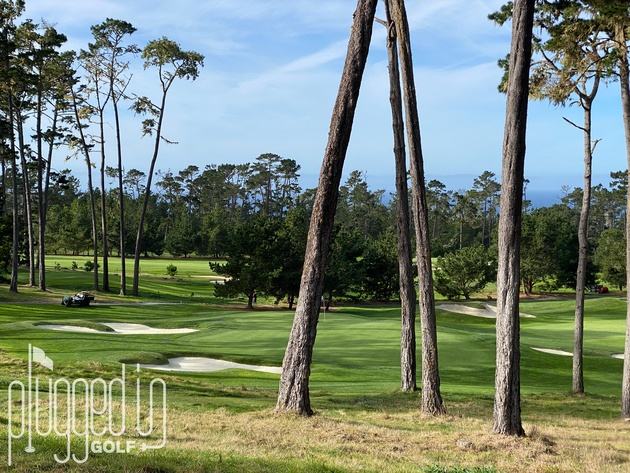 The other reason I don’t understand that complaint is that the thirteen holes in the forest are magnificent.  Tall, thin tree lines dappled with Spanish Moss divide the holes, letting you feel both isolated from and connected to other golfers.  Consistent, often dramatic, elevation changes keep your eyes engaged on every shot. 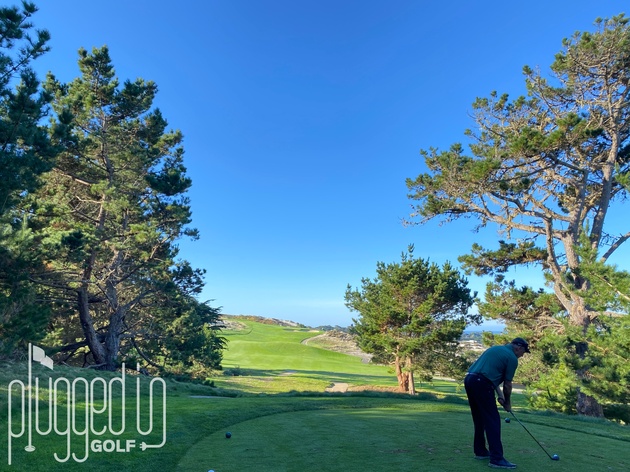 By modern standards, the blue tees at 7,025 yards are not outrageously long.  However, the starter only recommends them to those with plus handicaps who drives it over 275 yards.  Before you think, “I hit it 280 on the simulator (once in a while)” and run to the tips, let me tell you about my playing partner.  He’s an MLB pitcher with a 3 index who hits it well over 300 yards.  He chose the gold tees (6,552 yards) and played a round that was enjoyable but far from easy.  Follow the starter’s advice.

Part of what makes Spyglass Hill play longer than the card indicates is the elevation.  Yes, there are downhill holes, but they do not give back nearly as much as the uphill holes take.  Additionally, Robert Trent Jones meted out the distance much differently than many modern courses.  Often you’ll see a course try to boost its yardage by lengthening the par 3s.  Spyglass Hill gets to over 7,000 yards despite the par 3s averaging just 170 yards. 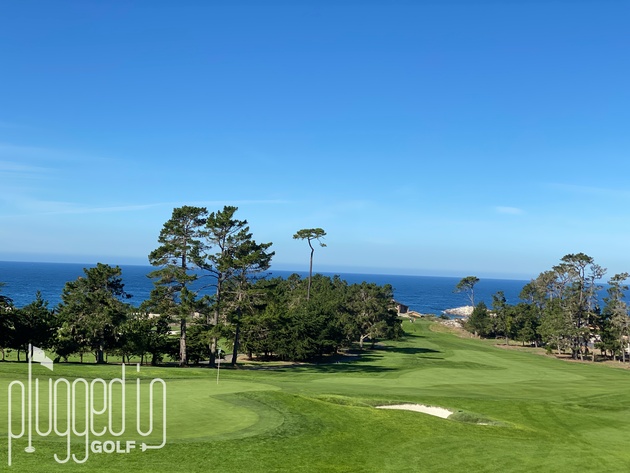 Spyglass Hill is demanding but straightforward off the tee.  There are only a couple holes where the correct line is not obvious.  Even on those holes, playing straightaway won’t hurt you.  That said, having a caddie to point you in the optimal direction is recommended.  At a course this tough, you should take every advantage you can get.

If you’re a truly elite driver of the golf ball, you can get a significant leg up on your competition at Spyglass Hill.  There are few holes where you can’t drive it as far as you want, and several holes allow long, accurate players to take advantageous lines.  Spyglass does not put a limit on great drives but it does have a very high minimum for acceptable ones.  If you’re not hitting fairways and driving it the recommended distance, you’ll be in for a long day. 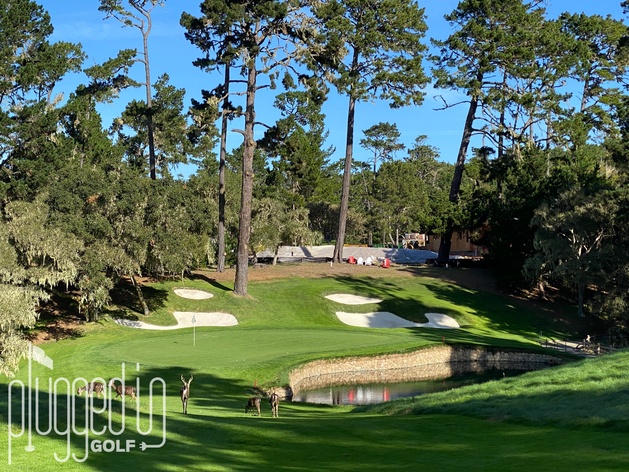 As you walk the fairways at Spyglass Hill Golf Course, you’re not going to be slapped in the face with fairway movement the way you are at many modern courses.  That might lead you to expect a lot of driving range lies for your approaches.  You won’t get them.  While Spyglass’s fairways don’t heave and swell, they are almost all tilted substantially.  Many are steeply uphill, and some are canted to the right or left.  This alone can produce tough lies, and within those primary tilts there are smaller movements as well.

Should your drive miss the fairway, your approach will be doubly hindered by a more severe lie and thick rough.  Particularly in the morning before the dew burns off, the rough gives no quarter.  The rough is actually a triple penalty when you consider that it will limit your drive, putting an even longer iron in your hand. 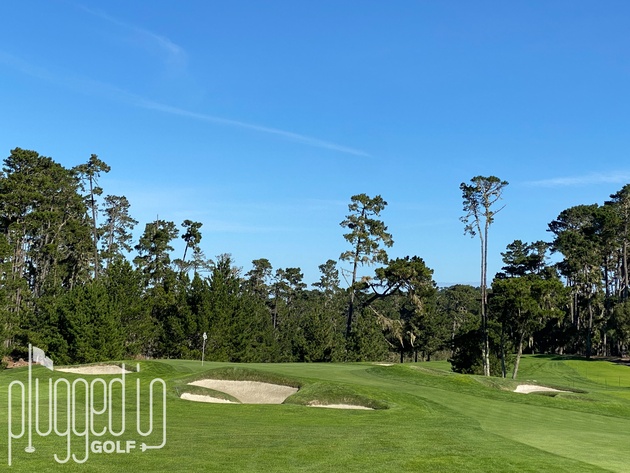 The greens at Spyglass Hill vary in size, typically in proportion with the length of the hole, but there are very few that look inviting.  Most of the greens are elevated – some significantly – which can hide their size, shape, and contours.  The downhill approach shots are made uncomfortable through the size, shape, and angle of the green.  Trust your yardage, trust your caddie, and pick conservative targets.  If you’re able to rack up some greens in regulation, odds are you’ll be walking off with all the booty.

To further that point about picking good targets, Spyglass Hill’s greens are ripe with sucker pins.  There are numerous holes where focusing on the flag will have you ignoring yards and yards of safe landing space.  If you’re out there to chase birdies, by all means, fire at the pin.  However, if you’re trying to produce a scorecard worth framing, stay disciplined and play to the middle. 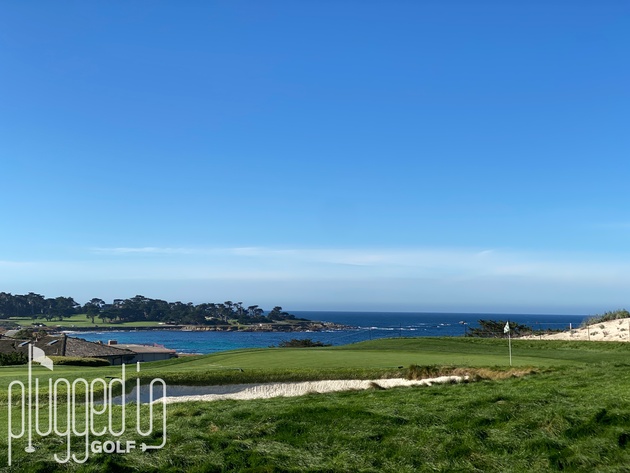 Why is hitting greens so valuable?  Because Spyglass Hill defends them like buried treasure.  This being a Robert Trent Jones course, that starts with bunkers.  The sand traps are large, deep, and numerous.  If you don’t possess a strong sand game, you’d do well to avoid the bunkers, particularly those below the level of the green. 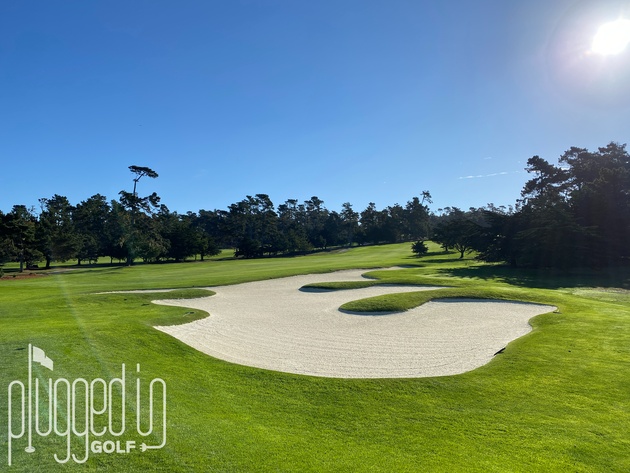 The defense of the greens is rounded out with elevation and rough.  If you miss a green, you’ll be playing out of thick grass that’s going to limit your control of the ball.  Additionally, you’re likely to be pitching uphill to a green you can’t see cleanly.  Any up and downs should be treated as significant victories.

When you make it to the greens, you’ll notice they have a lot in common with the fairways.  Neither has big, modern undulations, but both can be steeply tilted.  That’s not to say that the greens are featureless – most have a ridge, shoulder, or tier – but you won’t see many roller coaster putts.  Outside of the major features, the breaks tend to be subtle which is another reason to enlist a caddie. 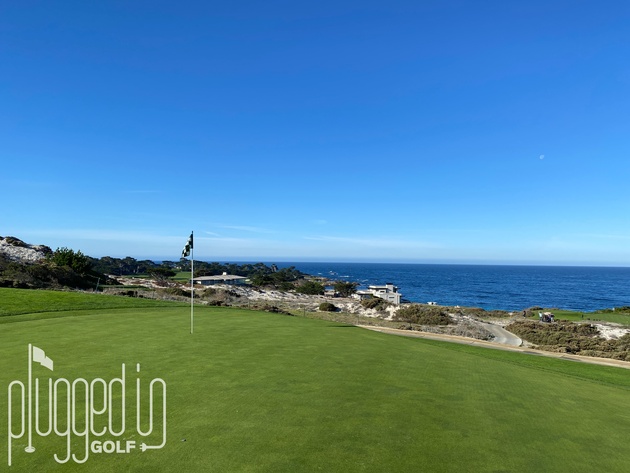 My favorite word for Spyglass Hill Golf Course is relentless.  The minute you hit a mediocre shot, par starts to look like a remote possibility.  This is particularly true on the numerous long par 4s.  Even if you pick the right tees, Spyglass Hill is going to put a lot of mid and long irons in your hands, so your ball striking needs to be on point.

The other side of that doubloon is that Spyglass Hill rarely closes the book on you after one bad shot.  Even though the rough is thick, you can give your approach the full heave ho and get it to the green.  The tree lines are very light, so swashbuckling recovery shots are possible.  Getting up and down is challenging but never out of the question. 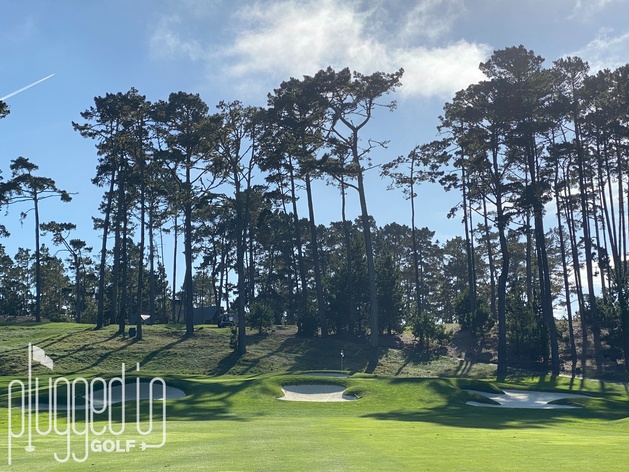 Finally, I love that every shot at Spyglass Hill feels possible.  There are courses that are tough because they’re tricky, they require tons of local knowledge, or they dole out bad breaks haphazardly.  Spyglass Hill is tough because it demands high quality golf shots.  Every good and bad score is earned.  After back to back doubles, you can look at the next drive and say, “Ok, here’s where we turn it around.”  After back to back birdies, you need to hit a solid tee ball or you’ll give those strokes back.  It’s as tough and fair a test as I’ve ever encountered. 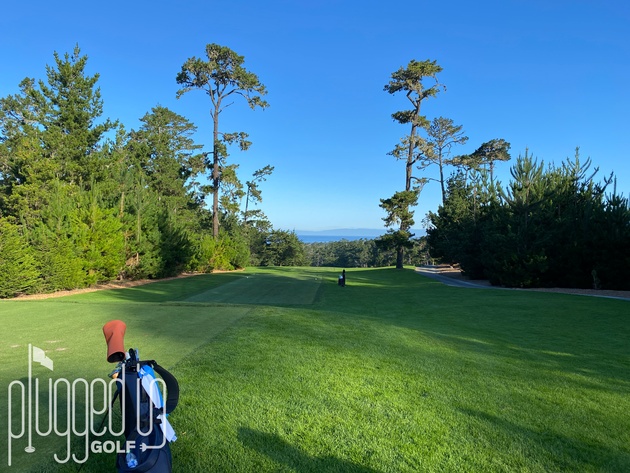 One of the best opening holes in golf and a fitting introduction to Spyglass Hill.  Getting home in two is only available to those who crush their drive, take advantage of the downhill fairway, and have the confidence for a long approach to a well-defended green.  Playing the hole conventionally requires three solid, well-planned shots. 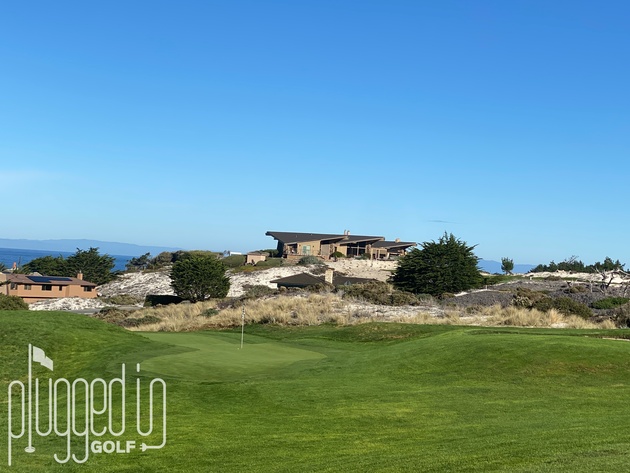 Robert Trent Jones said that of all the par 4s he designed, this is his favorite.  The longer your drive, the better your look at this very skinny, very long, three-tiered green.  Depending on the pin placement and the length of your drive, you can hit almost any club for your second shot.

This is the #2 handicap hole, but our caddie argued that it’s the toughest hole on the course.  The length alone makes this tough, but the challenge is compounded by needing to hit a controlled fade off the tee.  Even a good drive will leave a long approach to one of the larger greens on the course. 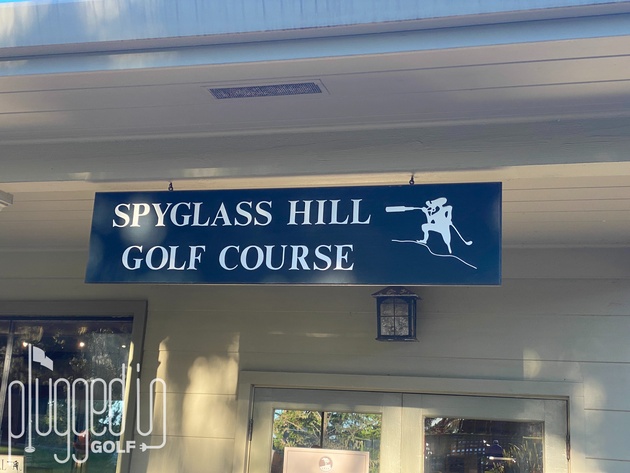 Spyglass Hill does not have Pebble Beach’s views or its major championship history, but shot for shot, I actually prefer it.  For me, this course has limitless replay value, and I could make an argument for almost any hole as my favorite.  I hope I don’t have to wait another fifteen years to play it again.