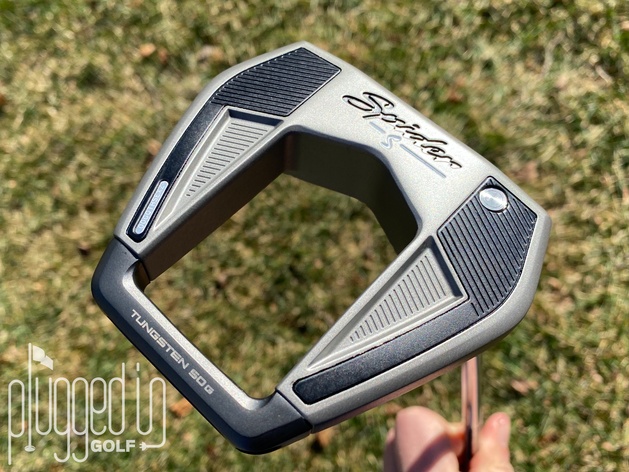 The TaylorMade Spider S Platinum is a very large, ultra-forgiving modern mallet.  Unique use of color to aid alignment.  Available with a plumbers neck (L-Neck) and single bend shaft. 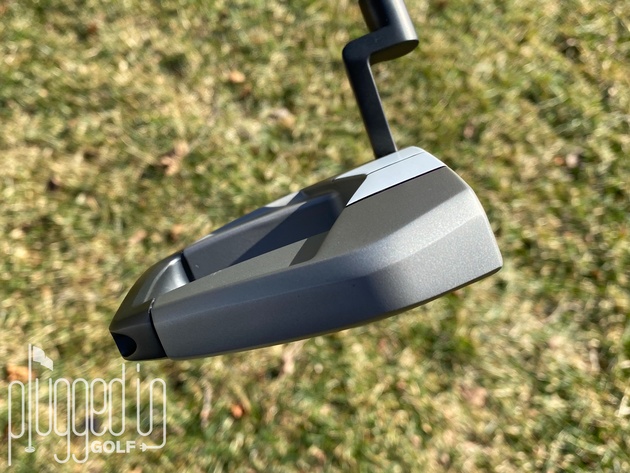 If you had told me over ten years ago that the TaylorMade Spider would become one of the strongest franchises on the greens, I doubt I would have believed you.  But here we are in 2021 with no less than thirteen new Spider putters in the mix.  In this review, I’m taking a closer look at the Spider S Platinum. 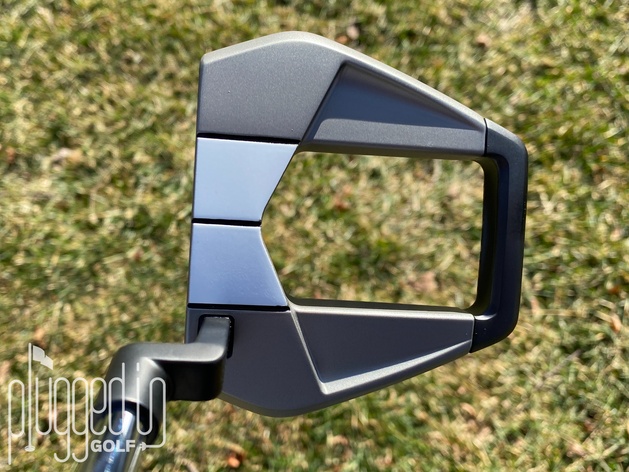 In terms of shape and size, the Spider S Platinum doesn’t differ from the original Spider S [review HERE].  This is a modern mallet with a very large footprint, particularly from front to back.  The shape is familiar – essentially a #7 – but with the opening at the back closed by a tungsten bar.

What’s interesting about the Spider S Platinum is the White True Path.  TaylorMade states that, because white is the most reflective color, it allows you to most clearly see the path of the stroke and the ball.  Also, the True Path is the same width as the ball to help frame it at address.  What I found is that the difference in color made the putter look smaller.  Because I was focused on the white element, the rest of the putter faded away. 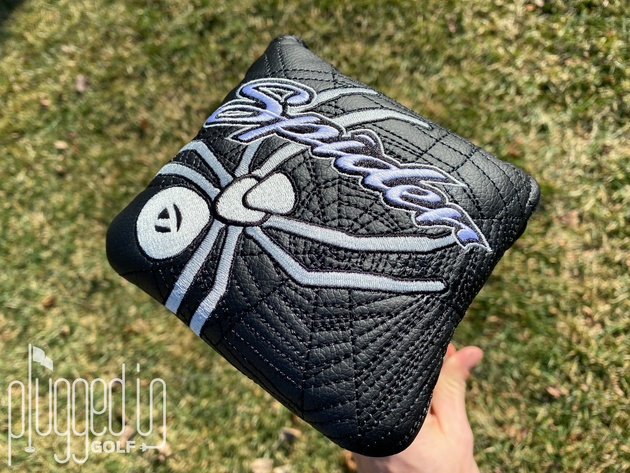 I also need to give some love to the Spider’s headcover.  Whether it’s the stock offering seen above or the special editions, no major OEM does mallet covers as well as TaylorMade. 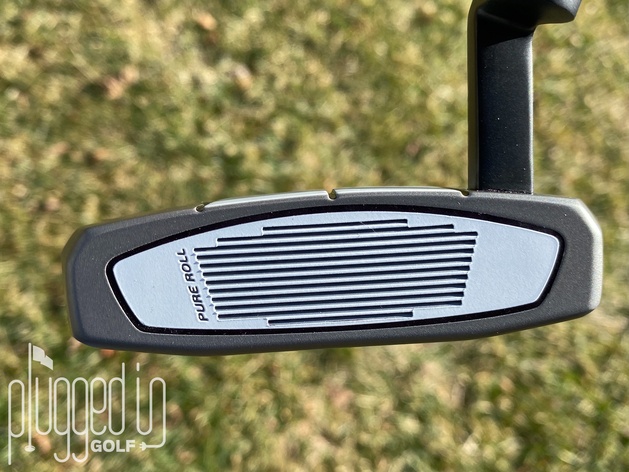 The Spider S Platinum uses a thicker Pure Roll insert which provides a very soft, solid feel.  Despite being very soft, this face doesn’t feel mushy like other inserts.  Mishits feel firmer than centered strikes, providing a gentle reminder to focus on the next putt.

One thing I noted about the Spider S Platinum, as with other insert putters, is that it diminishes the feel differences between golf balls.  If you like the feel of a softer ball but prefer the performance of a firmer one, this putter could be the solution. 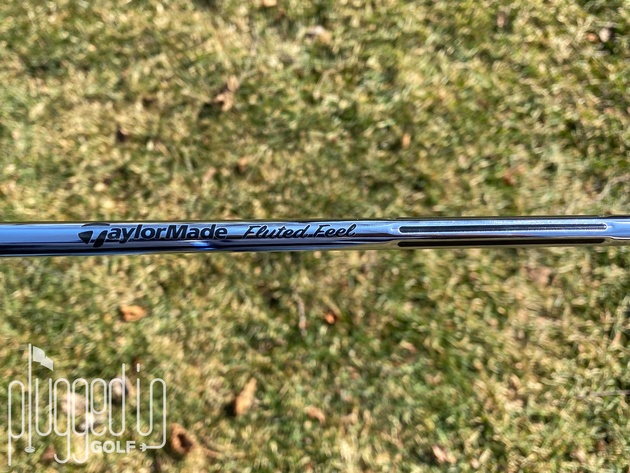 Another change for the Platinum Spider is the shaft.  TaylorMade uses the “Fluted Feel” shaft in many of their new Spiders to “enhance feel, increase stability and tighten dispersion.”  Per TaylorMade, this is done with a softer section located 5″ from the shaft’s tip.  Personally, I did not notice a dramatic difference in feel or performance, but, as with other putter shafts I’ve tested, I don’t have the data to confirm or dismiss their claims of improved stability. 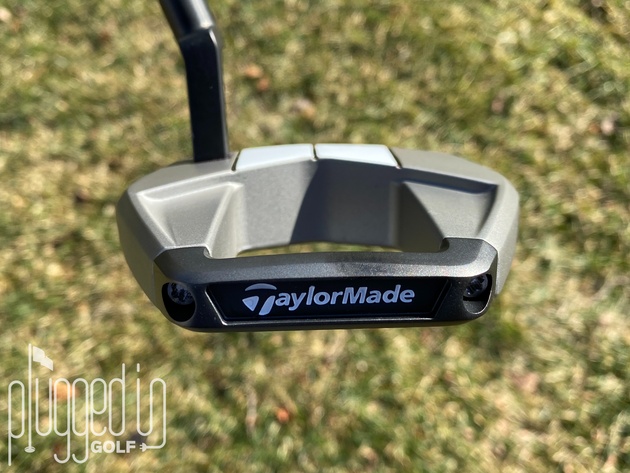 The Spider S was created to raise the bar on forgiveness, and it does just that.  As with the original, you can hit the ball almost anywhere on the face and have it perform like a centered strike.  That’s valuable on all putts, but I really noticed it on long putts.  Mishitting a 50-footer doesn’t result in a 10-footer for par with a putter this stable.

Another thing that I noticed about the Spider S Platinum is that it swings easily.  I often find that large mallets feel bulky and awkward.  At all ranges, I felt comfortable with the Spider S even though it’s about as far from my gamer style as you can get. 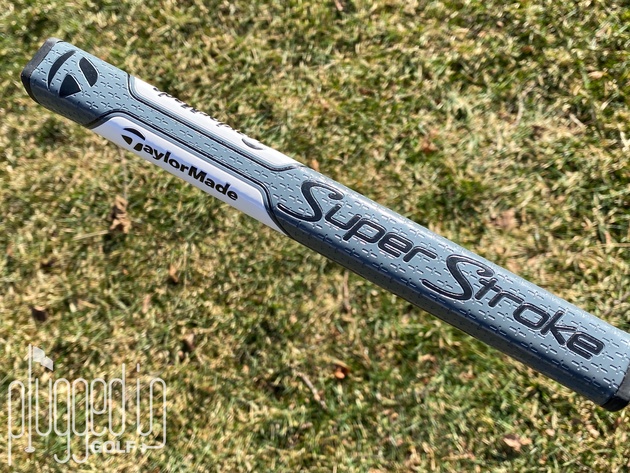 Clearly TaylorMade read my review of the original Spider S, because the Platinum version has more neck options.  The TaylorMade Spider S Platinum is available with an L-Neck (plumbers neck, shown here) or a single bend shaft.  The L-Neck creates a small amount of toe hang, somewhere around 3:30 (TaylorMade specs it at 20 degrees).  If you want a face-balanced putter, opt for the single bend shaft.  TaylorMade also offers a flow neck in the Spider SR, though, per TM, that only offers 2 degrees more toe hang.

Finally, the Spider S Platinum comes stock with a Super Stroke GTR 1.0 grip.  This grip is comparable in size to most midsize grips with a very slight pistol shape at the butt.  As with all Super Stroke grips, it has a taper-free design to promote consistent grip pressure throughout. 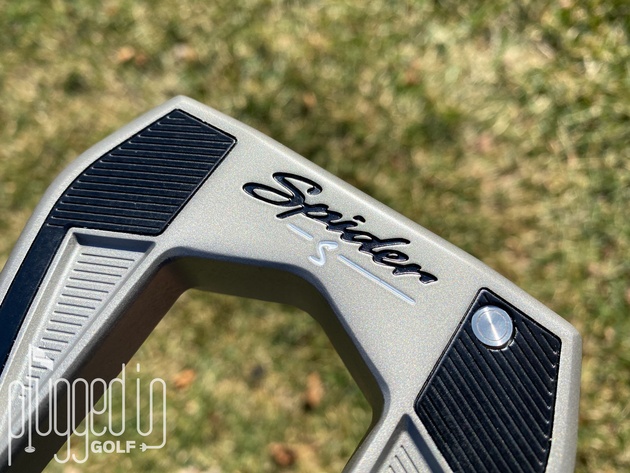 The TaylorMade Spider S Platinum takes the impressive forgiveness of the original Spider S and adds significant new elements.  I found the White True Path alignment aid helpful both for aim and in making the head look smaller, and the new neck options will make the Spider S Platinum playable for more golfers.