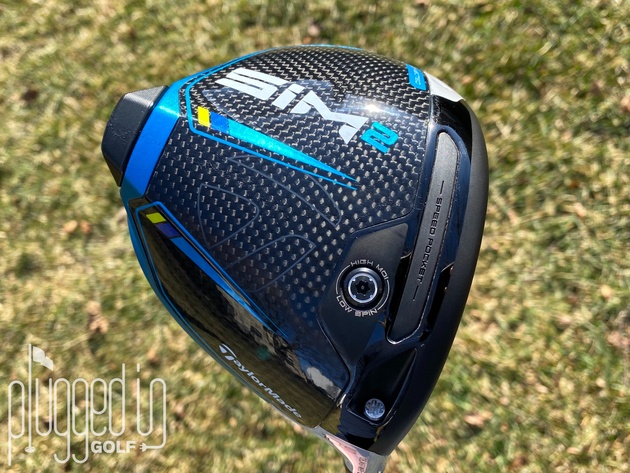 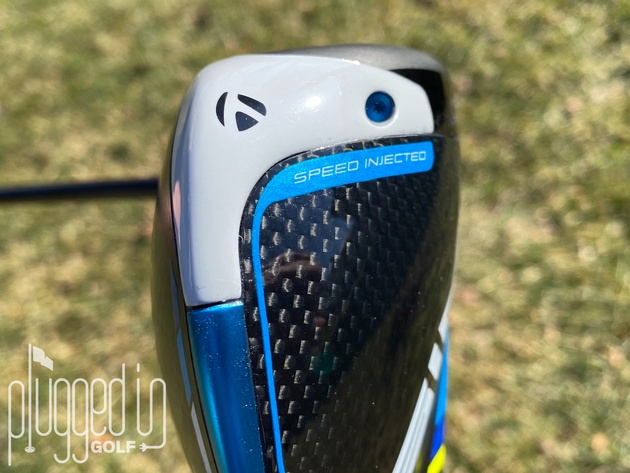 Due to the lack of PGA Show and general strangeness of 2020, the new SIM2 line from TaylorMade didn’t seem to generate the hype that it normally would.  However, that hasn’t stopped this new generation of drivers from becoming fast favorites among many of the fitters that I talk to.  I was eager to get my hands on the TaylorMade SIM2 driver to see what it could do for me. 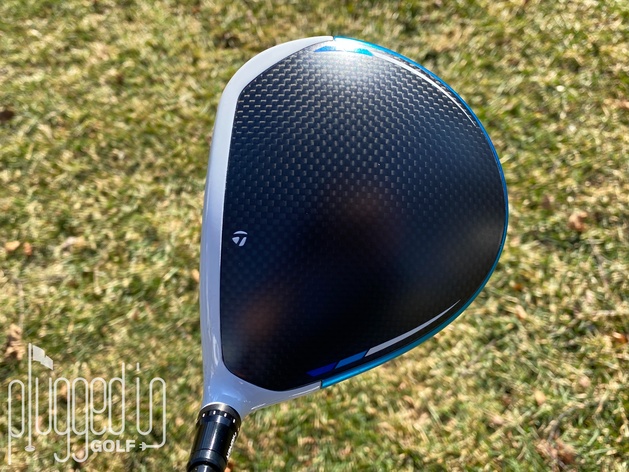 The TaylorMade SIM2 driver goes all in on carbon fiber.  The majority of the crown is black carbon fiber with just a thin band of white near the ball and a stripe of blue around the sides and rear.  On the sole, the carbon fiber provides a base for very large graphics in blue and white.

In terms of size and shape at address, the SIM2 driver looks compact with a slight pear shape that’s enhanced by the graphics.  Compared to the SIM2 Max, the SIM2 is noticeably shorter from front to back.  It’s also worth noting that the SIM2 sits perfectly square at address in the neutral setting. 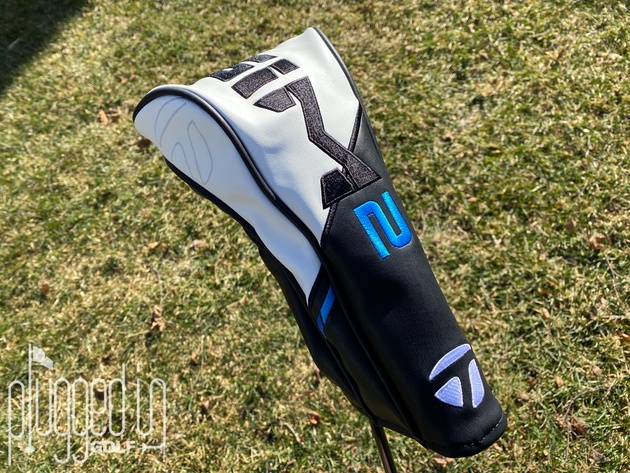 Finally, a quick shout out for the stock headcover.  2021 has been a good year for stock covers, and the SIM2 is at or near the top.  I particularly like the restrained use of the blue.  It looks sharp now but won’t look dated in a year. 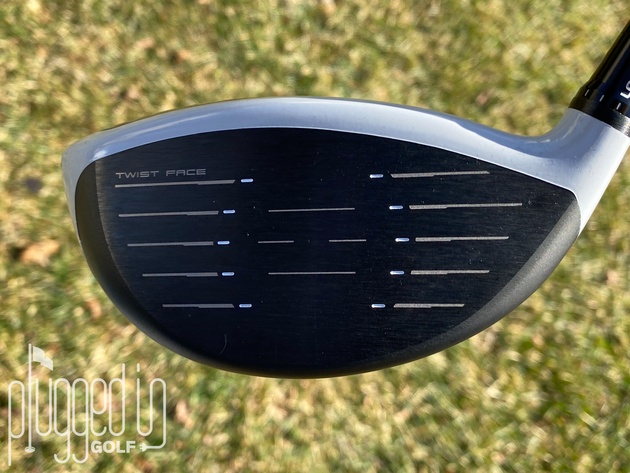 I LOVE the feel of the SIM2 driver.  Yes, all caps L-O-V-E.  This is, hands down, my favorite driver feel of 2021 and possibly going back a ways beyond that.  On center (and even off) it is unbelievably solid, like driving a stake with a sledge hammer.  The feel makes this driver addictive to hit.

The sound at impact is a mid-pitch “crack.”  The sound complements the feel well, but definitely takes a back seat to the way it feels.  I found that the sound doesn’t change a lot between pure and poor strikes, but there is adequate feedback through the hands. 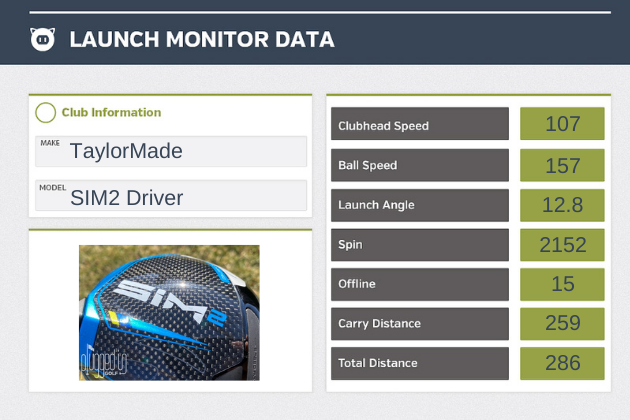 As we’ve come to expect from TaylorMade, their new SIM2 driver comes with a dump truck full of technology buzzwords.  Several of the technologies are carried forward from previous generations: Speed Injected Twist Face, Speed Pocket, and SIM Inertia Generator.  One omission is movable weights.  This is the first time in recent memory that no driver in the TM line has adjustable weights.  There is still loft and face angle adjustability at the hosel. 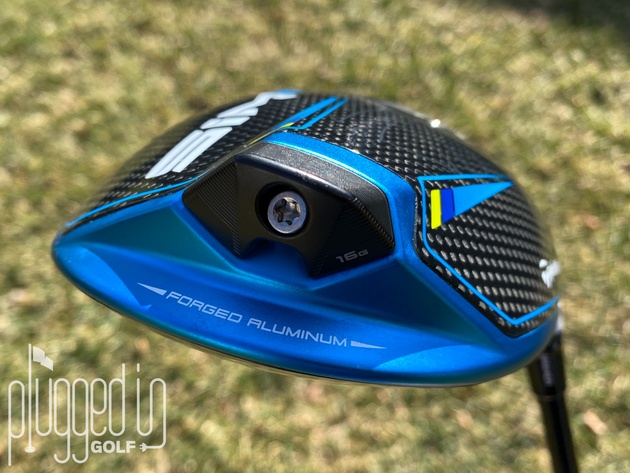 When testing the SIM2 driver, I found that the low launch, low spin claims were certainly true.  This driver wants to produce penetrating shots with loads of potential for roll out.  For the player who prefers a lower trajectory or needs to drop some spin, the SIM2 is a great choice.

What surprised me about the SIM2 driver is the level of forgiveness.  Based on TaylorMade’s description, I expected this to be their “players only” model, but I found that it was very consistent in terms of both ball speed and direction.  Particularly in my first session, I was not swinging the SIM2 well, but I still got solid results.  On the days when I brought a better swing, the results were flat out excellent. 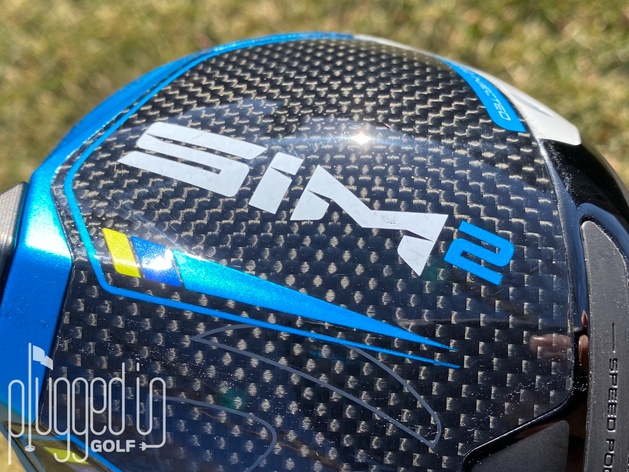 While the tinkerers may miss the adjustable weights, I think they’ll get over it when they experience the forgiveness and consistency of the TaylorMade SIM2 driver.  If you’re the kind of player who wants lower launch and spin off the tee, this needs to be near the top of your demo list for 2021. 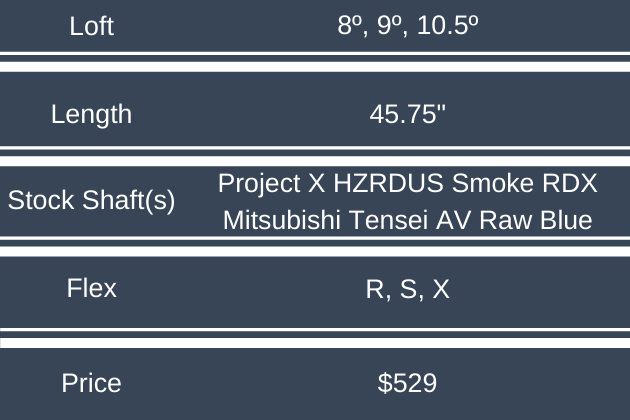