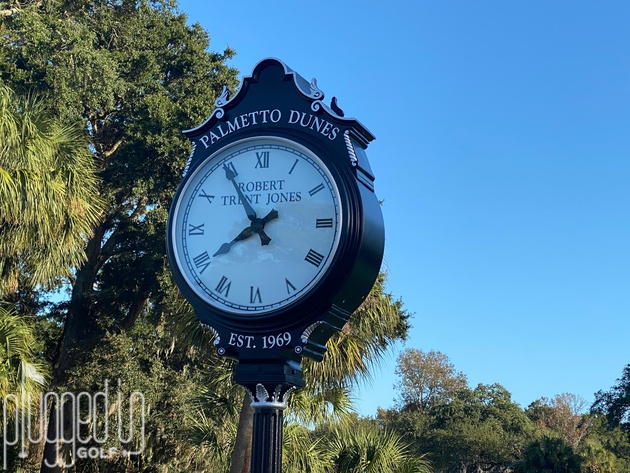 The Palmetto Dunes Robert Trent Jones Golf Course is a classic RTJ design.  Balanced difficulty.  Lots of danger around every green.  One of the more beautiful courses on Hilton Head Island. 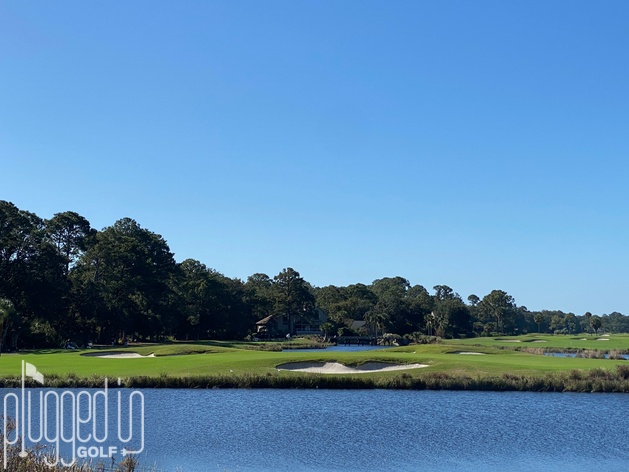 Hilton Head Island refers to itself as “The Golf Island.”  This nickname is well-earned as they pack over 23 courses into 69 square miles.  Even more than the sheer volume, what I enjoyed about my visit to HHI is the variety of golf.  From the narrow corridors of Harbour Town [review HERE], we traveled to the wide, snaking fairways of the Palmetto Dunes Robert Trent Jones course.  This wide range of golf is part of what makes HHI such a great golf destination. 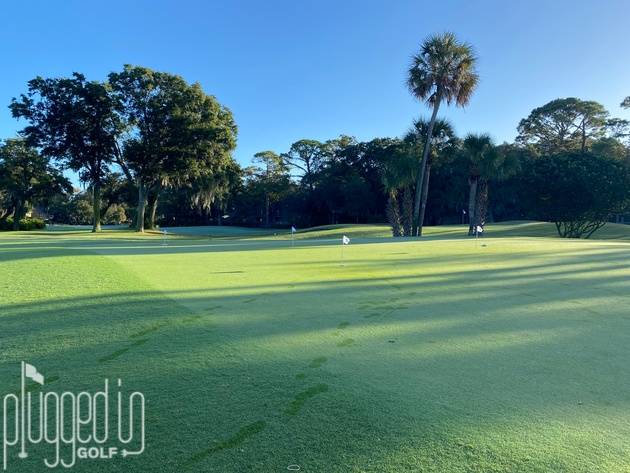 When you walk out the back of the pro shop at the Robert Trent Jones Course at Palmetto Dunes, you see the practice green sitting between the first and tenth tees.  It’s a very good practice green, accurately replicating the speed of the greens on the course and having enough size to hold several foursomes.  A small point that I appreciate: they don’t overload the surface with holes.  This allows the golfers to spread out and to practice longer putts. 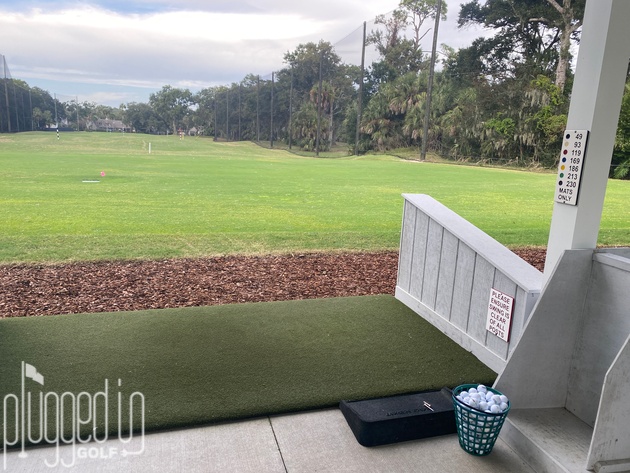 The green, however, is not the highlight of the practice facilities.  That would be the Toptracer Range.  From fifteen hitting stations, players can use Toptracer technology to measure every shot they hit.  This takes your warm up to a Tour level as you get precise data on the distance of each shot.  For tourists, especially those coming from different elevations, this can be really useful for dialing in your clubs. 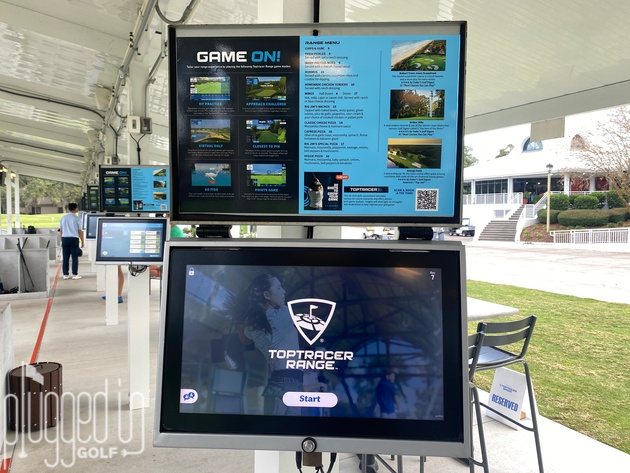 Toptracer Range is not just for players who are about to play a round.  Anyone can use this technology at any time.  Toptracer allows you to play simulated golf, play Topgolf-style games, or to gather data on your game.  If you use the Toptracer app on your phone, you can even save your sessions. 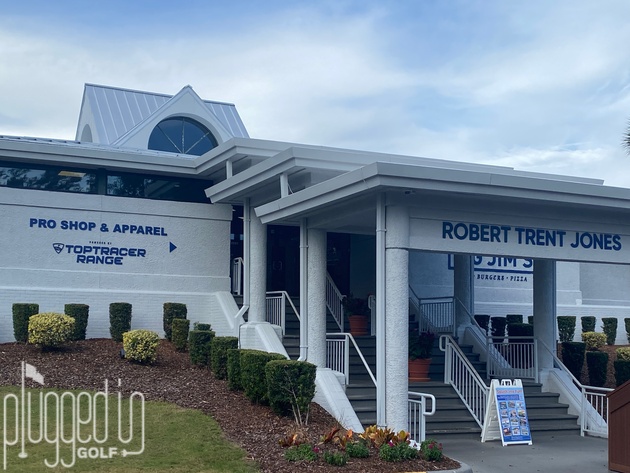 The pro shop at the Palmetto Dunes Robert Trent Jones Golf Course is expansive.  Name any apparel brand, and you can probably find it here.  Their selection is focused on basics like hats, golf shirts, and jackets, but they also have shoes, some clubs, and other necessities.

On the course, we found the beverage cart to be readily available throughout the round.  There’s also a snack shack located next to the range.  This lets you visit it before you head off and as you make the turn.

Finally, Palmetto Dunes was the only course we played at Hilton Head that had GPS on the carts.  Since we were all first-timers, this was a very useful feature.  The full color touchscreens gave us a leg up on the holes that would otherwise require local knowledge.

Find more on the food and accommodations at Palmetto Dunes Resort HERE. 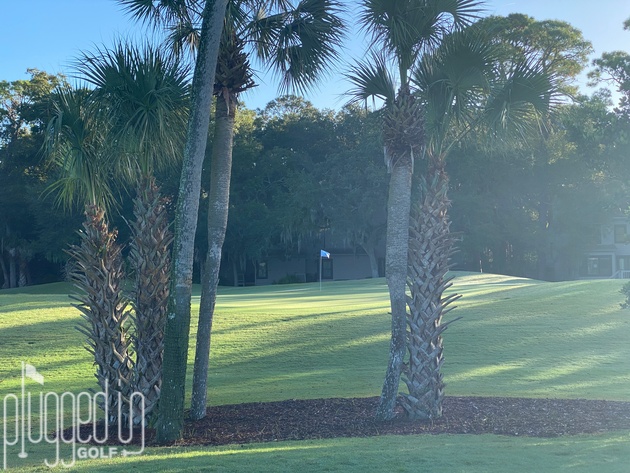 The Robert Trent Jones Course at Palmetto Dunes is easily the prettiest course that we played during our time at Hilton Head Island.  For most of the front nine, the course is heavily tree-lined.  There’s plenty of width, but each hole feels contained to itself. 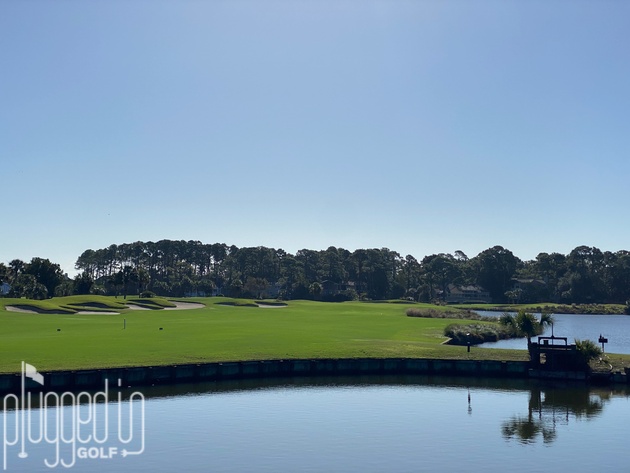 As you move toward the back nine, the waterway that threads through Palmetto Dunes comes into view on almost every hole.  The course opens up, visually, and it develops a great sense of place.  There are houses throughout the course, but they’re set far enough back that they’re never primary in your view. 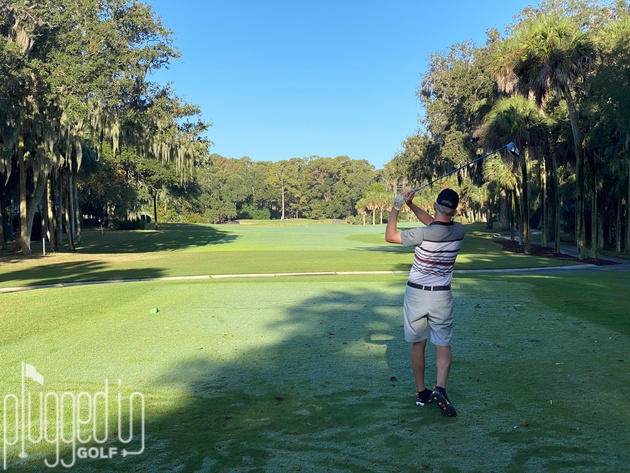 As I just described, the character of the Palmetto Dunes Robert Trent Jones Course changes throughout the round and with it, the tee shots.  For most of the front nine, the course is tree lined.  The fairways are fairly wide, but the tree lines are thick.  If your drive gets that far offline, you’re going to be in big trouble. 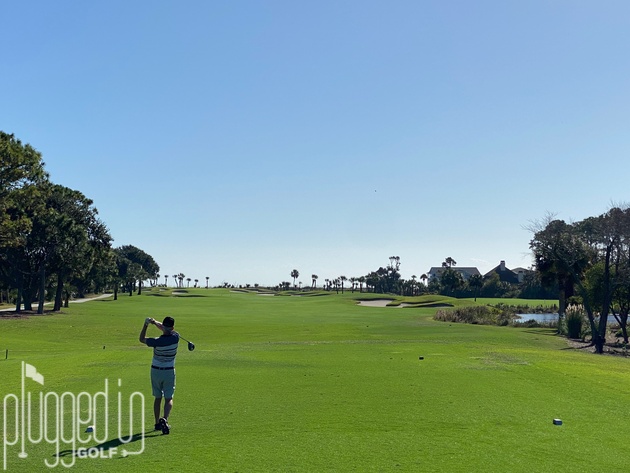 As you get to the back nine, the course feels more wide open.  However, the tee shots are actually more difficult.  First, despite the width, there’s more visual trickery with water, angles, and fairway bunkers.  The fairways snake around the hazards, making you question not only what line to take but also how far to hit it.  Second, the hazards on the back – specifically all the water – are more penal. 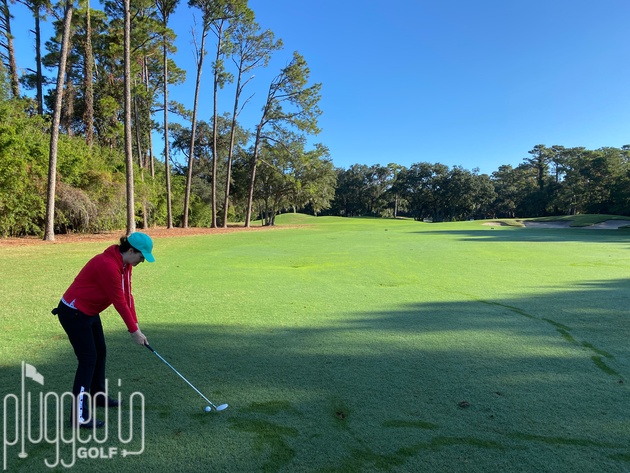 Palmetto Dunes offers players a wide range of yardages at the RTJ Course.  The gold tees stretch to just over 7,000 yards, and the red tees play to a hair under 5,000.  There’s also a set of black tees at 2,625 yards that could be good for juniors or those seeking an executive course experience. 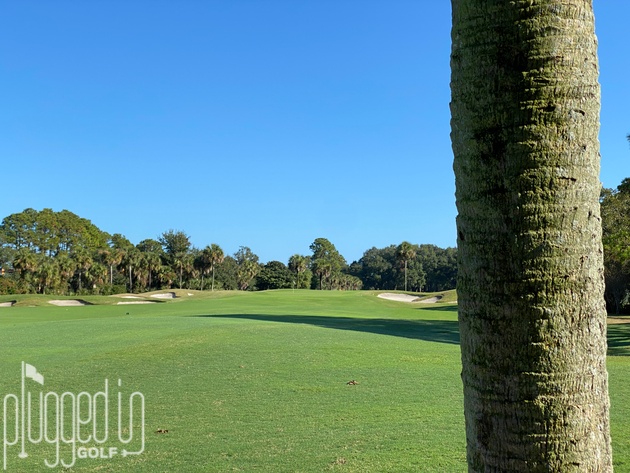 When choosing your tees, I would advise you to think more about your ability with mid and long irons than your driver distance.  I played the blue tees (6,570 yards) and found that, especially on the back nine, hitting a full drive (carrying 250+ yards) often put me into a troublesome spot.  Though I had the length to hit driver-short iron, the hazards led me to lay back and hit longer clubs.  If you want the best chance at making birdies, move up, bomb it over the trouble, and enjoy hitting wedges into the greens. 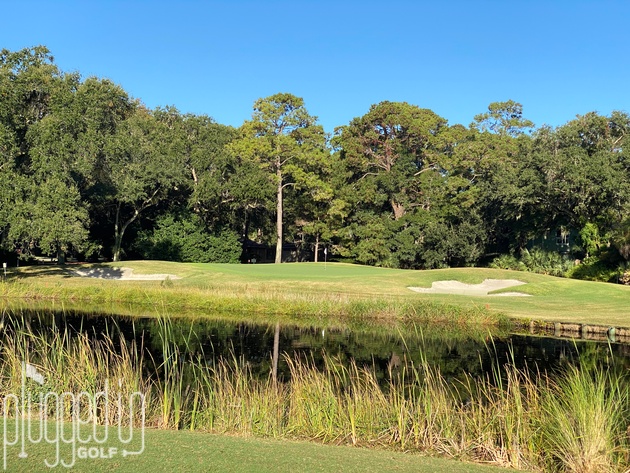 Accurate drives at the Robert Trent Jones Course will set up favorable approach shots.  The fairways here have more movement than any of the other Hilton Head courses we played, but the undulations are still quite modest.  You’re very likely to draw a flat, even lie.

Similarly, the rough at Palmetto Dunes was the thickest we encountered, but it’s not overly penal.  It was cut fairly short, which made finding tee shots easy.  It was possible to catch a thick, jumper lie but not common. 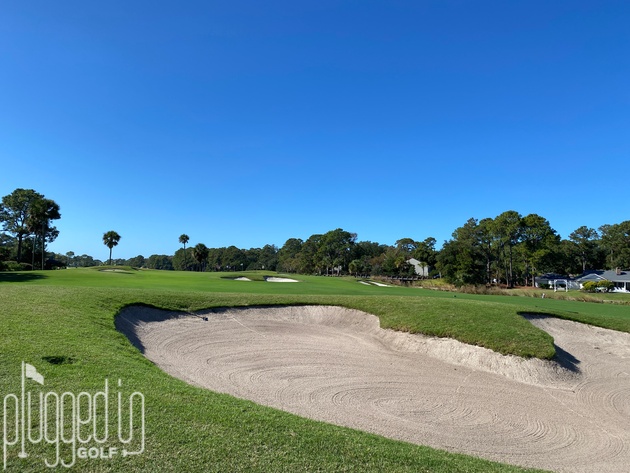 While the rough won’t add whole strokes to your card, the fairway bunkers might.  Though they’re not very deep, they do have substantial lips.  If you get too brazen with your club selection, you can easily catch one and find yourself playing consecutive shots from the same trap. 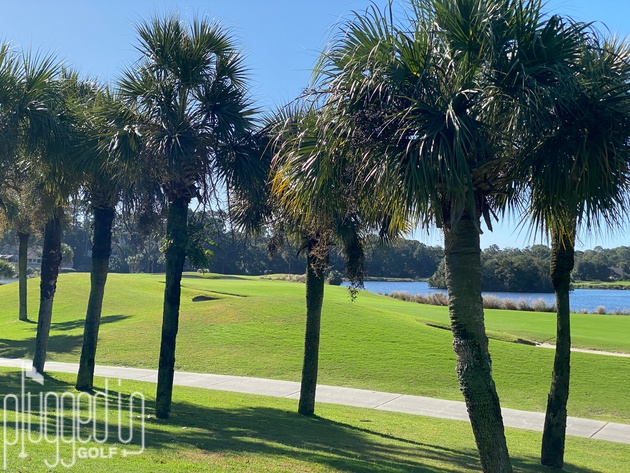 In classic RTJ style, the greens at this course are sizable.  This makes them inviting targets, but they’re almost all guarded by platoons of bunkers.  Try to avoid the pull of the flagstick and play away from the sand, when possible.  If you can play eighteen holes without being in a trap, you’re likely to post a tidy score. 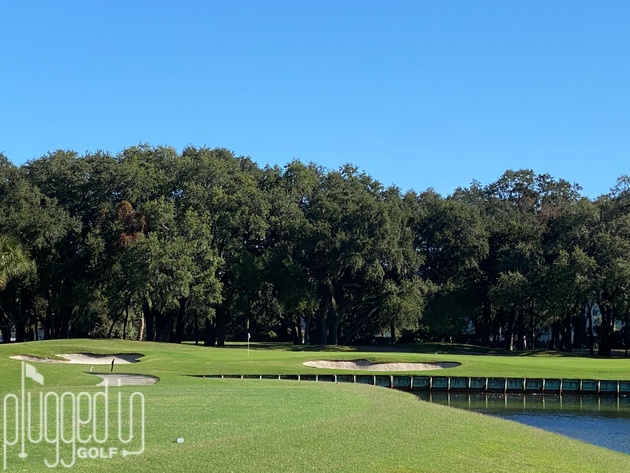 Finally, the greens are pushed up like the Palmetto Hall Arthur Hills Course [review HERE], but there are avenues to play the ground game.  If you’re committed to running the ball up, most greens offer narrow runways between the bunkers.  This is a dicey approach, however, so I’d recommend sticking to the high-flying route. 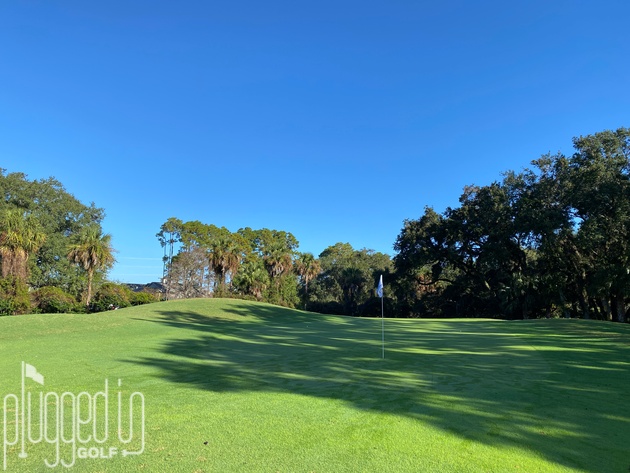 Something I’ve always appreciated about Robert Trent Jones designs is that they balance the challenge across all elements of the game.  Some architects demand everything from your ball striking and nothing from your putting or vice versa.  With RTJ, you get a tough-but-fair test all the way through. 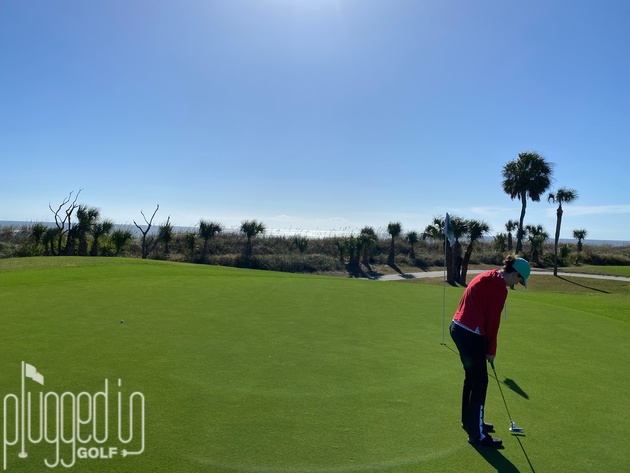 The large greens feature substantial undulations.  Because those movements are spread out on bigger canvases, you don’t get the wild, rollercoaster putts, but you still need to read every green carefully.  There aren’t many straight putts, and your speed consideration needs to incorporate more than just your distance. 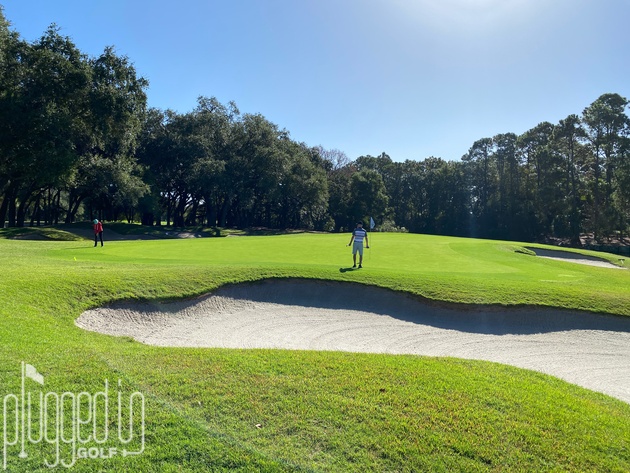 Around the green, the biggest danger to your score comes from the bunkers.  The large, amoeba-shaped traps will swallow up wayward approaches.  Most of the greenside bunkers are fairly deep, requiring some skill to escape.  The balance is that you usually have plenty of green to work with.  If you’re not a confident bunker player, aiming away from the flag to give yourself a larger landing area may be the best play.

If you keep your ball on grass, you shouldn’t have too many problems around the greens.  There are some large mounds, but the surrounds are otherwise tame.  The rough around the greens is short and medium-thick which can provide an ideal lie for hitting a high, soft pitch.  Unless you’re short-sided, you shouldn’t have too much difficulty giving yourself good up-and-down opportunities. 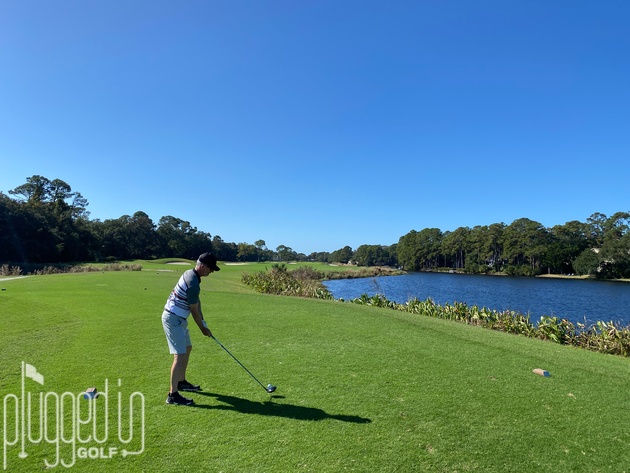 This relatively short par 5 will test either your discipline or your driving accuracy.  The scorecard will make you think you can get home in two, but big drives will land in a very pinched, precarious section of the fairway.  Playing this hole in three strategic shots should give you a birdie putt.

This short one-shotter feels like a mid-round breather, but it has sneaky difficulty.  The middle of the green is a wedge or short iron away, but the pin distance can vary significantly.  No matter where the flag is, you’ll be trying to fit your shot between bunkers and water.

Another hole that asks you how confident you are in your driver accuracy.  If you stick to the left side of the hole, away from the water, you need to avoid the bunker or par will become a remote possibility.  A rolling, well-defended green demands an accurate approach if you want to make birdie. 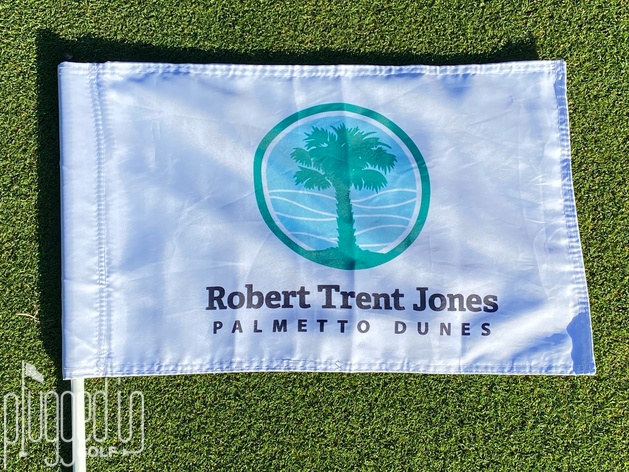 No matter what your strengths as a golfer, you’ll find a place to shine at the Palmetto Dunes Robert Trent Jones Golf Course.  This track spreads the difficulty across all elements of the game, favoring no specific player.  And even if the course gets the better of you, you can feel good about taking in the beautiful waterfront views.