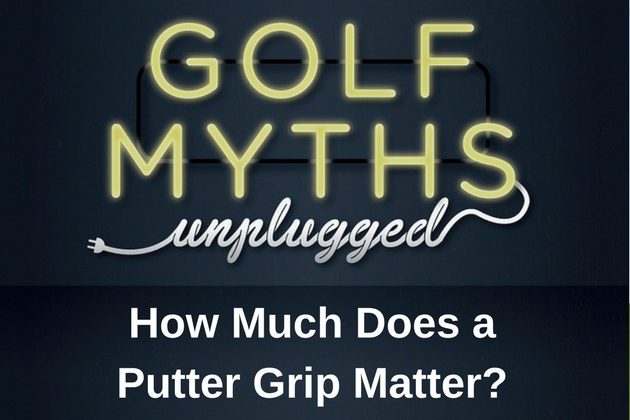 One of the biggest stories in golf equipment isn’t discussed nearly as much as it should be: the ascendency of SuperStroke grips.  Thanks to Jordan Spieth and an army of other top players, giant putter grips that might once have been thought of as a “gimmick” or a “crutch” are now commonplace.

The questions that we sought to answer are, “Do these big grips make a difference?  And if so, is it a positive one?” 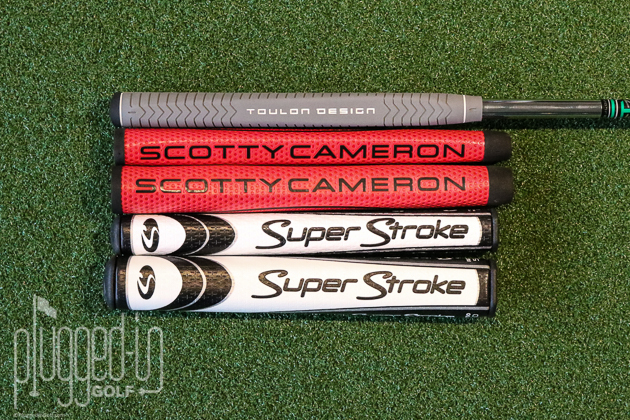 Myth #2 – Larger putter grips keep you from “flipping” the putter

Myth #3 – A different grip can change your club path

We brought together five testers with handicaps ranging from 0 to 10.  Each player rolled five putts with each of five different putter grips – a standard sized Lamkin grip, mid-size and jumbo Scotty Cameron Matador grips, and Super Stroke 2.0 and 5.0 grips.  Every putt was measured on SAM Puttlab.

Outside of changing the grip, we did not do anything to modify the putter between tests.  This did cause a change in swing weight because the grips did not all weigh the same.  We opted for this method for two reasons.  First, it’s what most golfers do.  Second, changing the headweight to hold swing weight constant would mean that we’re trading one inconsistency for another.  We may repeat this test in the future with identical swing weights if that’s something that’s of interest to our readers. 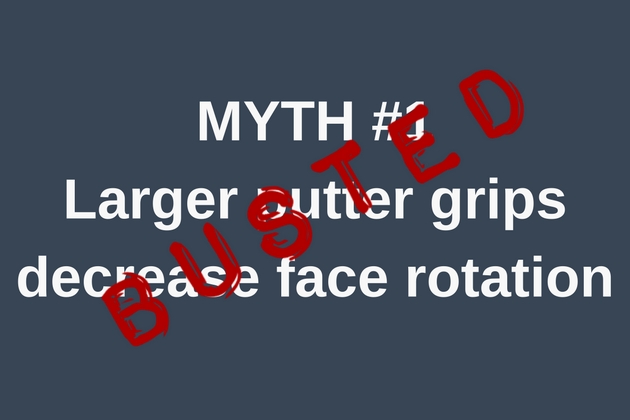 Big putter grips are alleged to “take the hands out of the stroke” and make the mythical “straight back, straight through” stroke easier.  This is all the way busted.

These results shocked our testers.  They all felt that the “soda can” grip locked their hands into position.  This is another example of the truth in the cliche, “Feel isn’t real.” 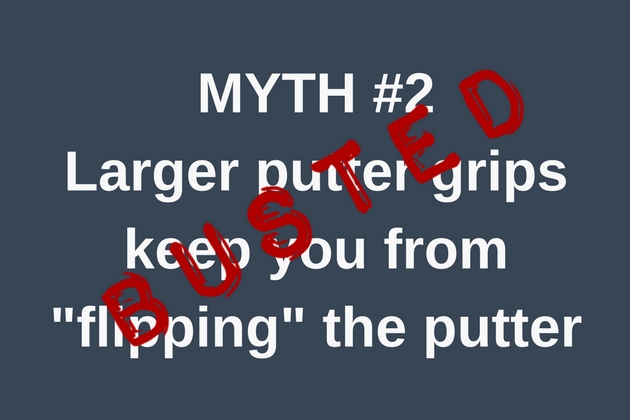 Another facet of “taking the hands out of the stroke” is not “flipping” the putter into impact.  Flipping refers to letting the putter head pass your hands, thus adding loft to the club.  While the results weren’t as stark as the rotation myth, we can still say that this myth is busted.

Again, only one tester showed the most shaft lean with the largest grip.  The same number of testers made their “flippiest” strokes with that same large grip.

The picture is equally muddy when we look at the group averages and medians.  Our smallest grip did produce the lowest amount of shaft lean, but beyond that it was a mess.  The testers had more shaft lean with the smaller of the pair of SuperStroke grips and Scotty Cameron grips. 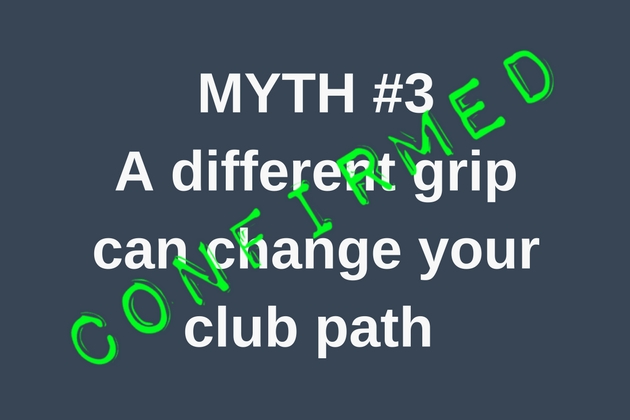 Now for a myth that we can clearly confirm: your putter grip can alter your club path.

Individually, our testers saw their paths change 1.8, 3.2, 2.8, 4, and 2.2 degrees as they moved through the different grips.  While club path is much less important than the club face in putting, these are still significant changes. 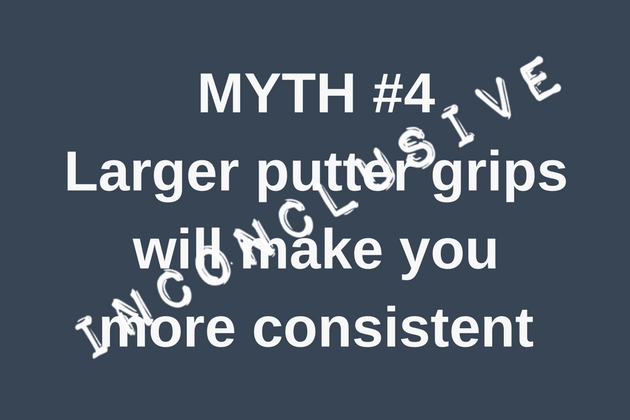 We saved the best for last: the magic word “consistent.”  If you make your putter grip bigger, your putting will get more consistent, right?  Turns out, there might be some merit to that.

If we look exclusively at the SuperStroke 5.0 – the biggest grip in the test – the evidence looks pretty weak.  It’s middling in every measure of consistency: face angle, club path, impact location, and rotation.  However, if we include the jumbo Scotty Cameron grip, the big putter grips look pretty good.  Focusing on the group averages, the jumbo Scotty was #1 in every consistency metric.  It was also the leader in median in 3/4 categories.

How should we interpret this?  I have two thoughts.  First, the shape of the grip may matter as much, or more, than the size.  Second, there must be a point of diminishing returns with size.  Bigger is better, until it’s not.

While the big putter grips didn’t deliver on the promises of minimizing face rotation or decreasing a “flip,” there was some evidence that a larger grip could lead to an improvement in consistency.  However, the data was not conclusive enough to make me run out, slap a giant grip on my flat stick, and challenge Jordan Spieth to a putting contest.

As always, the best thing that you can do when changing your equipment is to work with your teaching professional and/or club fitter.  They will have the tools to figure out what will help your game in the long term instead of slapping a band aid on it. 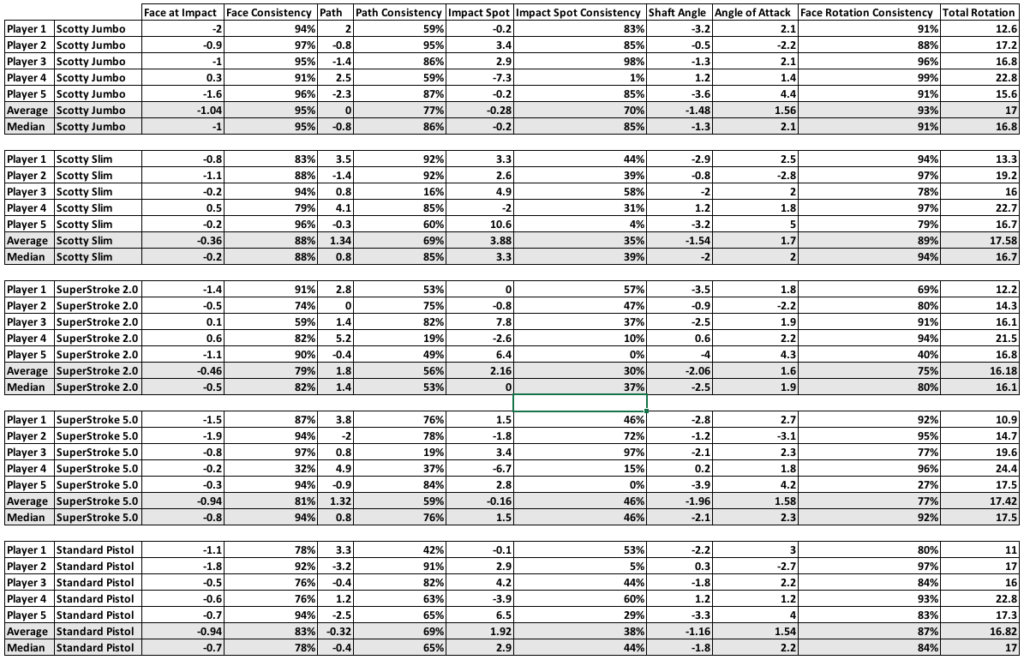