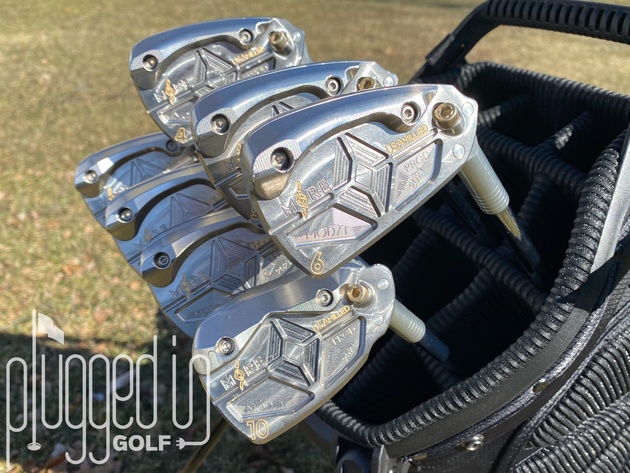 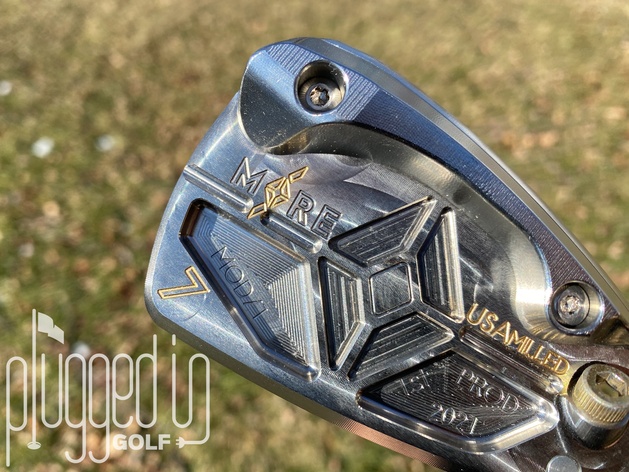 Bruce Sizemore is a club maker who has been on my radar for over two decades.  Back when I was fully immersed in the world of boutique putters, Bruce was making premium flat sticks that were unafraid of being different.  He’s carried that boldness into his latest venture, MORE Golf.  Built on the idea of delivering more customization through fully modular clubs, you’ll never confuse a MORE Golf club for a Titleist or TaylorMade.  I tested their MOD/1 iron set to see how such an unusual set performs. 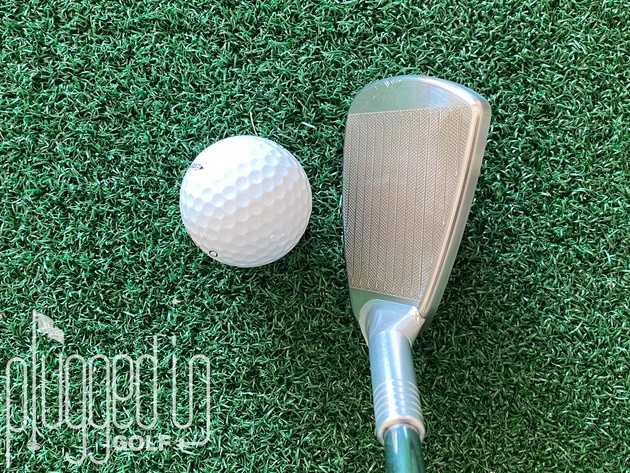 There is not a single angle from which the MORE Golf MOD/1 isn’t interesting.  At address, the first thing I noticed was the leading edge.  Much of the heel is shaved away, so much so that the bottom groove doesn’t extend all the way across the face.  Shifting to the toe side, you’ll notice a very square profile. 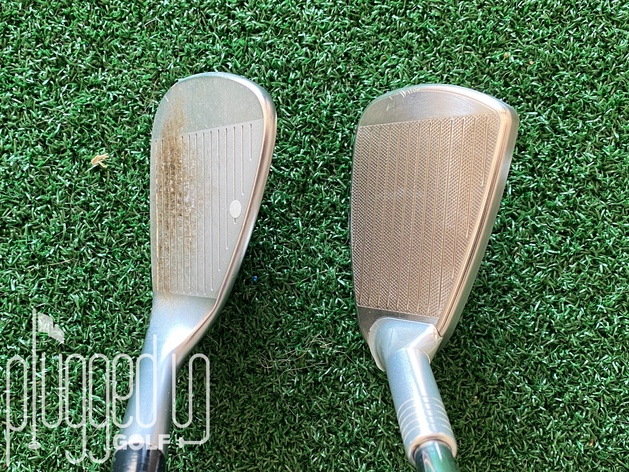 Finally, there’s the hosel.   The hosel meets the head more “up and in” than it does on a traditional iron.  In light of all these unusual features, the lack of a ferrule becomes an afterthought.

To touch on the normal points of interest, the top line is medium-wide with a sharp bevel on the back edge.  The club is fairly compact from heel-to-toe.  Depending on the flange attachment, the sole width is either on the thin or thick side of average. 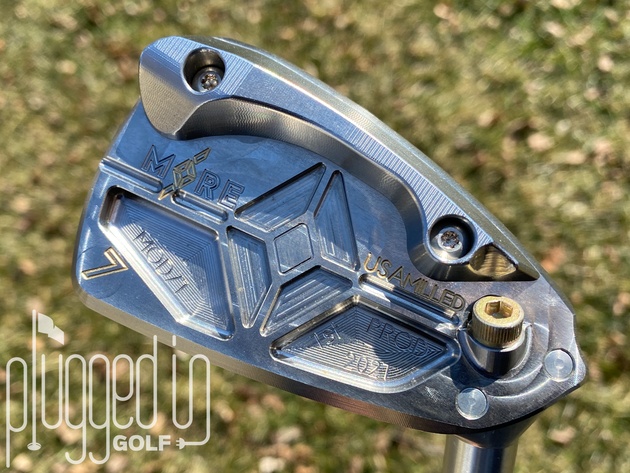 The MOD/1 is even more eye-catching in the bag.  There’s a seemingly endless stream of shapes carved into the back, not to mention the logos and engravings.  Once your eye stops pinging around the milling, you’ll notice the large hex screw connecting the hosel to the club head and the removable flange.

All in all, this club is why the phrase “love it or hate it” was created.  It’s hard to imagine anyone feeling indifferent about this wildly original design. 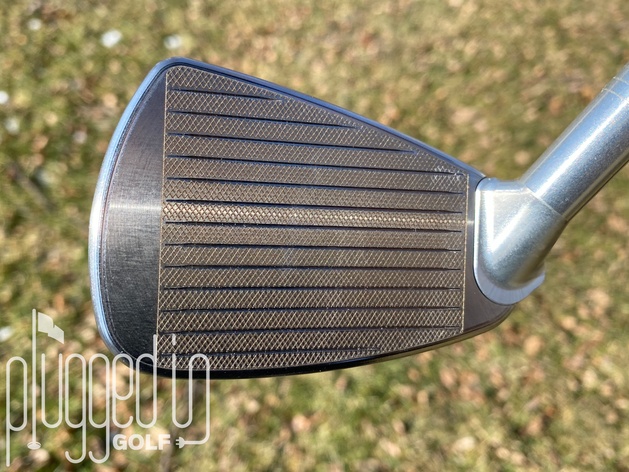 I had no idea what to expect from the MORE MOD/1 irons in terms of sound and feel.  On one hand, billet milled sets the expectation for softness and precise feedback.  On the other hand, all the screws and bolts and modular pieces made me think that feel could have been overlooked completely.

What I found with the MOD/1 irons was a feel that is firm and a little heavy on the face.  I tend to like that more solid sensation over the fast, thin feeling, especially in the scoring irons.  The accompanying impact sound is a medium-loud knock at a mid-low pitch.  The sound and feel mesh perfectly.

I felt the feedback almost entirely through my hands.  The sound of impact didn’t change much between pure strikes and misses, but the impact location was clearly communicated in the feel. 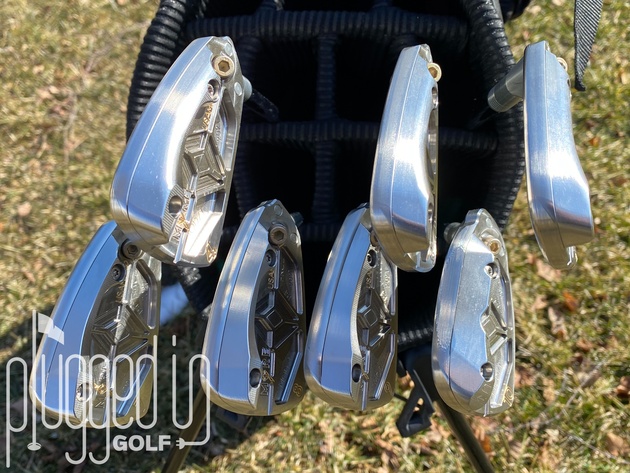 Before I get into my evaluation of the MOD/1 irons, I want to run through the claims that MORE Golf makes about them.  Most eye-catching is the idea that “They want to fly straight.”  According to MORE the “up and in” position of the hosel means the club face wants to stay square and hit straight shots.  That hosel is also 50 grams lighter than conventional hosels, meaning there’s more weight in places where it’s useful to the golfer.

Additionally, MORE makes strong claims about their sole and flange.  They state that unless you want a lie angle more than two degrees flat, adjusting the lie is unnecessary because of the “dynamic shaping” of the sole and flange.  Because of the hosel-free leading edge, MORE claims that their irons produce better contact from a wider variety of lies.  Finally, the modular design means you can swap parts to better fit your swing and replace components as they wear out.  Suffice it to say, there’s a lot going on with the MOD/1 irons. 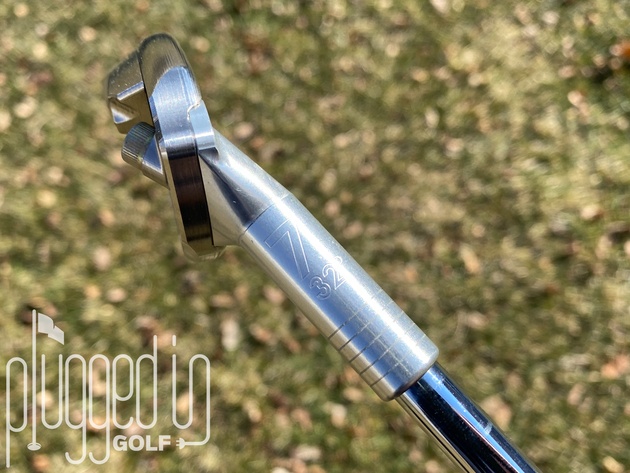 Let’s start with the most compelling idea, that the MOD/1 irons “want to fly straight.”  As much as I would love to pour cold water on this bold claim, I found it to be true.  During my testing, every time I looked up, the ball was curving substantially less than I expected.  Good swings weren’t good, they were laser straight.  Ugly shots fell next to the green, not 15 yards left of it.  When I tried to shape shots, it took a decent effort to create modest movement.  On their strongest claim, the MOD/1 irons deliver.

The MOD/1 irons are also unique in their turf interaction.  This was predictable as the leading edge is simply unlike anything else I’ve seen.  The club sails through the turf with less resistance than any other iron. 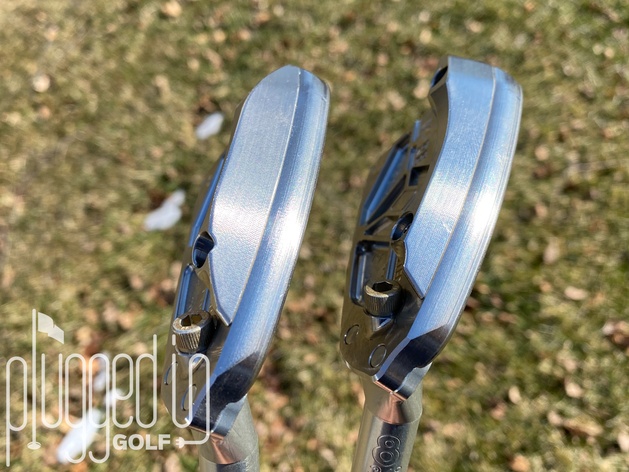 Next there’s the changeable flange.  As you can see above, it makes a noticeable difference to the sole width.  For me, it did not make a significant change to launch or spin.  However, I struck the ball much better with the thinner sole.  This makes a degree of sense as I tend to be shallow and generally favor thinner soles.  I do like that the MOD/1 irons give players options within the same head. 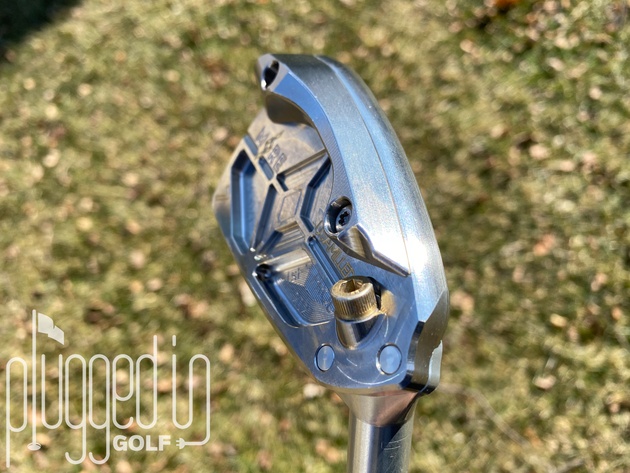 Finally, let’s touch on the overall performance of the MOD/1 irons.  I found the launch and distance to be in line with traditional cavity back irons, and the spin was just a hair below average.  All this makes sense as the lofts are about average for modern irons.  In terms of forgiveness, the MOD/1 is very forgiving until it isn’t.  Small misses are barely noticeable, but when you get to the perimeter of the face, the results can get ugly. 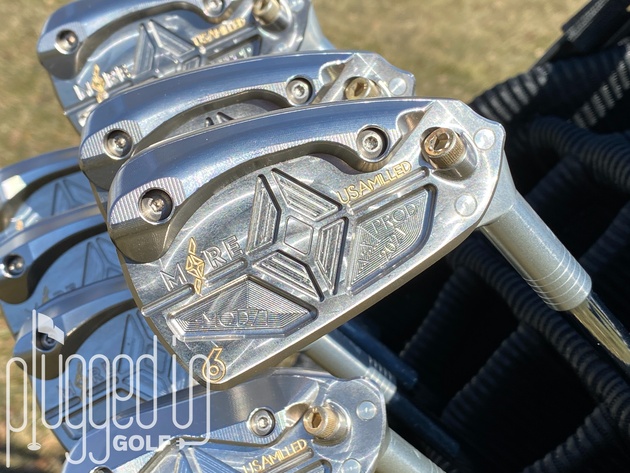 Every club maker claims to do things differently, but MORE Golf actually backs that up.  From the manufacturing techniques to the aesthetics to the performance, the MOD/1 irons are unlike anything I’ve ever hit before.  If you want your bag to stand out and your shots to fly straight, check these out. 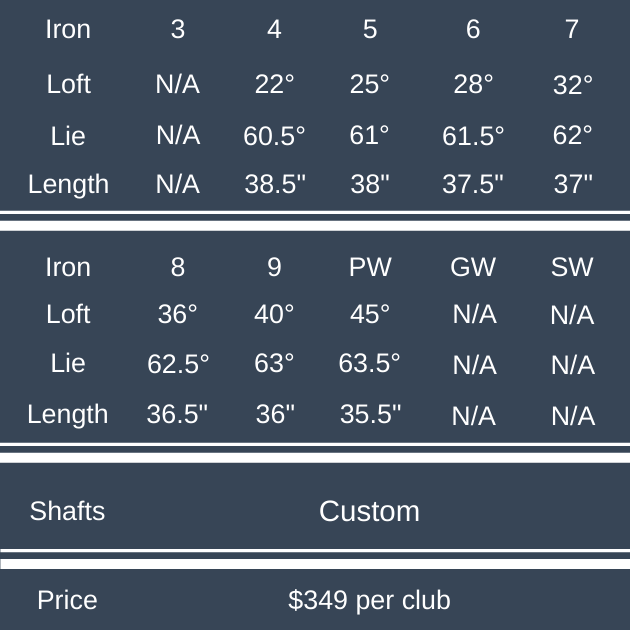