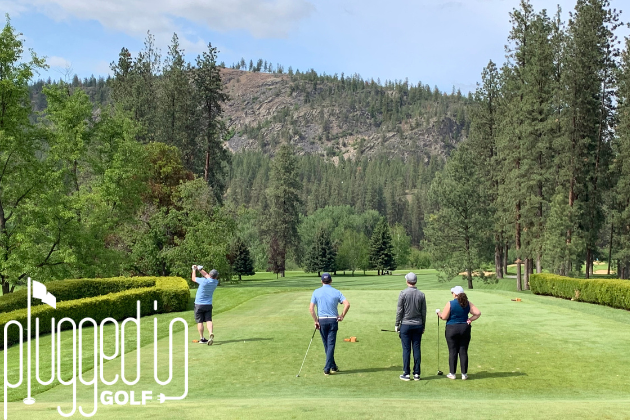 Kalispel Golf and Country Club is located in Spokane, Washington.  It is a historic course established in 1898 that champions an old-school style of golf and breathtaking scenery. 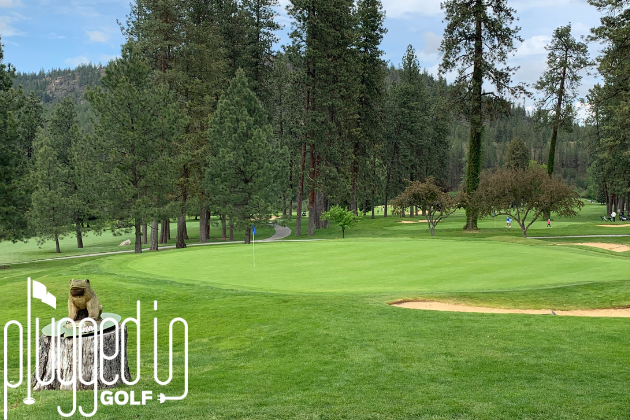 Kalispel Golf and Country Club, originally founded as The Spokane Country Club, has quite a history.  Its original claim to fame was hosting the very first U.S. Women’s Open Championship.  From there, some of the best to ever play the game have come to sample the course including Jack Nicklas, Arnold Palmer, Lee Trevino, Nancy Lopez, and Freddy Couples.  In fact, Tom Watson currently holds the course record of 11-under par.  More recently, the Kalispel Tribe of Indians purchased the par 72 course in 2015 and changed its name. While originally a private club, it is now open to the public. 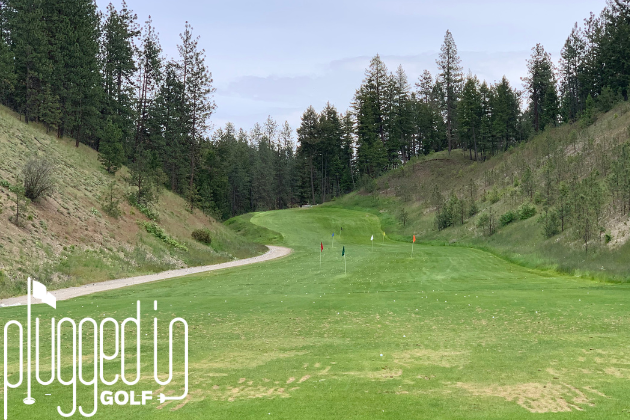 Like any golf course worth its salt, there is plenty of space for golfers to get thoroughly warmed up.  The primary practice area is a narrow range bordered by hillsides and featuring a skinny alley of fairway dotted with a few flags at various ranges.  That compact feeling foreshadows what you experience on the course itself: tight shots to small targets. 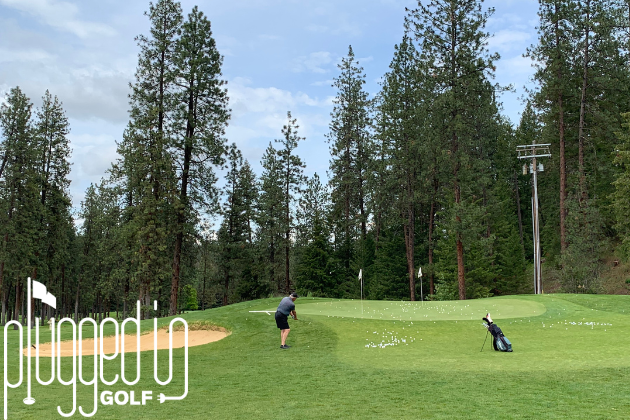 Besides the range, Kalispel features a green to practice chips and pitch shots.  It has two holes, a large green, and a bunker.  The practice area is rounded out by a large putting green featuring a number of holes to try any length of put you’ll encounter on the course. 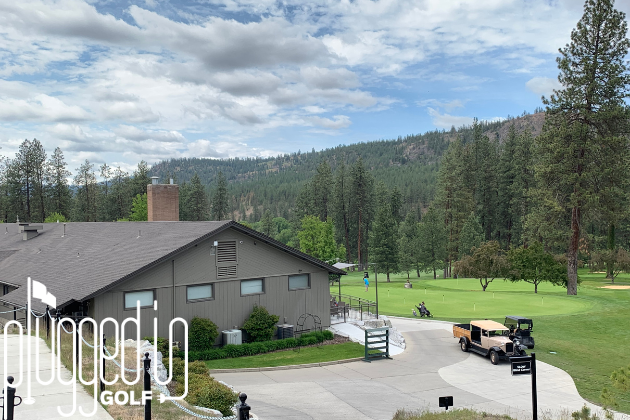 The customer service was nothing short of excellent.  From the starters to the pro shop attendees to the golf cart cleaners, the kind and friendly staff were there to answer all of my questions and tend to any needs.  I’ll also note that they have quite the comfortable golf carts with GPS and helpful tips to play the holes for newbies. 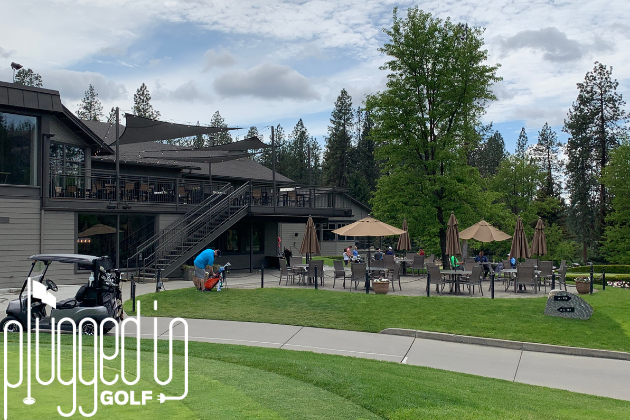 While there’s a comfortable lounge area to get drinks and watch golf after, the highlight of Kalispel – apart from the golf – is the food and drinks at the restaurant above it.  The 1898 Public House was positively stellar in every way.  From crispy coconut prawns to perfectly seasoned duck and some of the best fish and chips I’ve had at a golf course, I’d go as far as to say the restaurant is as big of a reason for me to return as the golf. 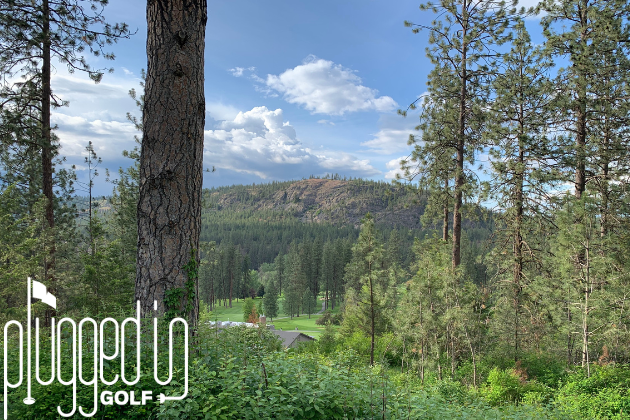 The scenery in and around Kalispel is arguably one of its biggest draws.  Stepping foot on the course, you’re immediately surrounded by tons of towering trees and hillsides.  Make a point of having your camera out for the highest points on the course where you can see for miles around, namely on holes 10 and 16. 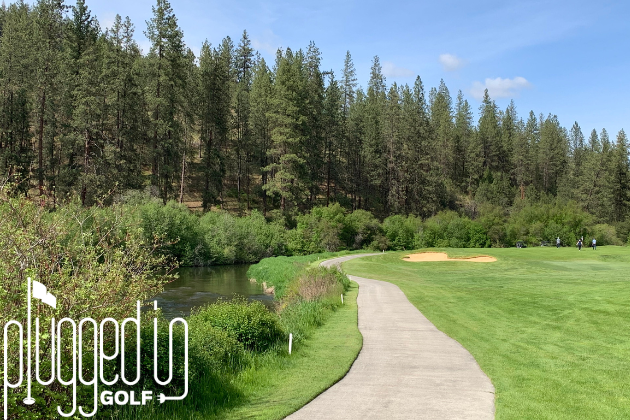 One of the best views, however, is actually from a relatively flat hole: number 2.  On that hole, the serene Little Spokane River runs alongside the left side.  Apart from the scenic views, there is a bit of wildlife to see on the course, too.  Deer are occasionally seen as well as turkeys, and a number of other birds. 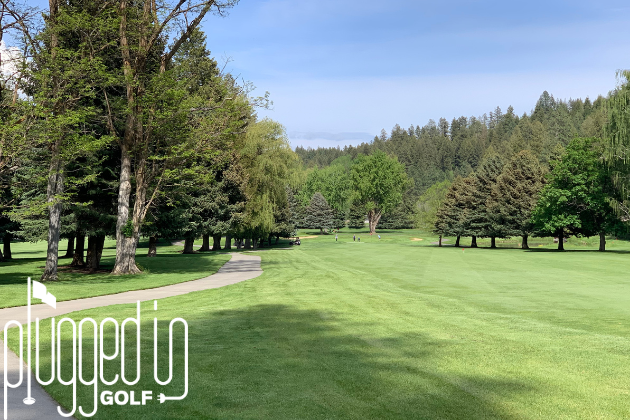 This course was originally founded nearly 125 years ago as the Spokane Country Club.  The most recent change came in 1988, with a redesign from Robert Muir Graves.  Even with those changes, however, it feels like country club target golf. 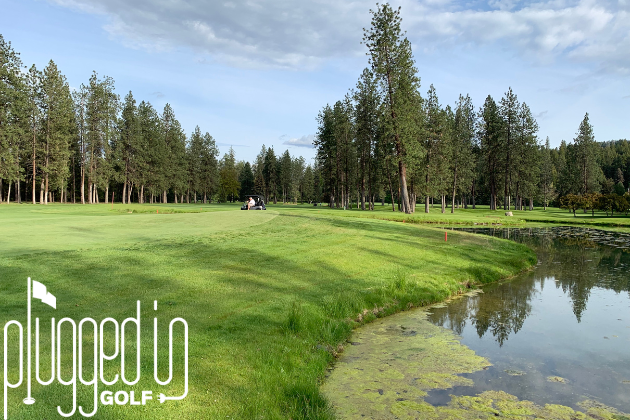 That means several holes require less than driver or you’ll run through the fairway.  With exceedingly tight fairways, you may want to take less club just to be sure you’re not being penalized by trees for a shot that’s only slightly off your target line.  Luckily, the mounds of rough aren’t very penalizing and the slopes are not dramatic, which makes for a relatively flat round despite the enormous hillsides surrounding the course. 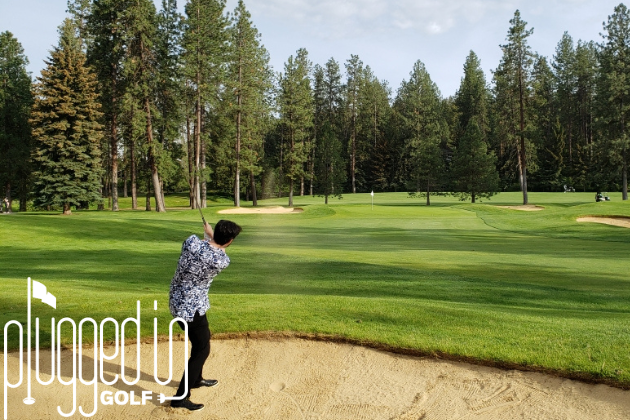 The target golf that’s present for many of the tee shots is also there in the approach shots.  There is an absolute premium on straight shots and hitting specific numbers to take advantage of the course.  Despite it not being a long course, the height and amount of trees should keep the longest hitters from being able to overpower the course. 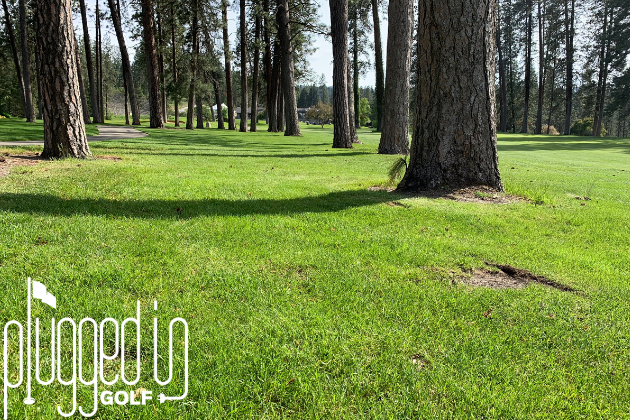 In fact, there are times when trees block a completely straight shot.  On hole number 3, a tall lone tree looms tall in the center of the fairway.  Sometimes to access the pin, you’ll not only need to be accurate, but actively shape a shot left, right, or low to score best. 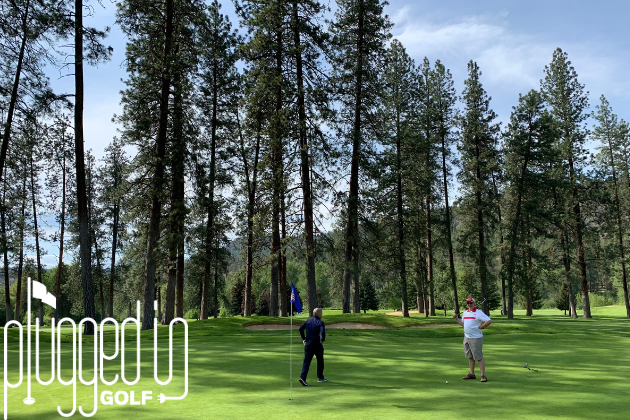 The greens at Kalispel are well-kept and relatively subtle in break and speed.  They are certainly not difficult and that’s not a bad thing.  The difficulty of this course is in keeping the ball straight and hitting specific numbers.  If you do, then you can score.  In fact, outside of a couple of tricky ridges in greens, I found myself overreading the breaks in the greens pretty consistently. 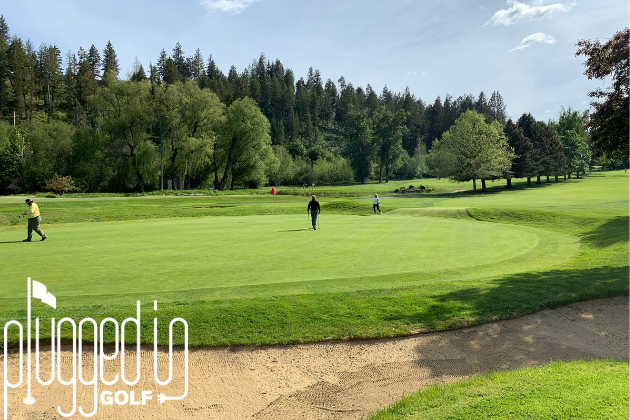 What surrounds the greens gives this course its teeth.  Along with the Little Spokane River and a number of other water hazards, this course is peppered with a ton of bunkers, 54 of them to be exact.  Every single hole has bunkers to contend with, making accurate shots all the more important. 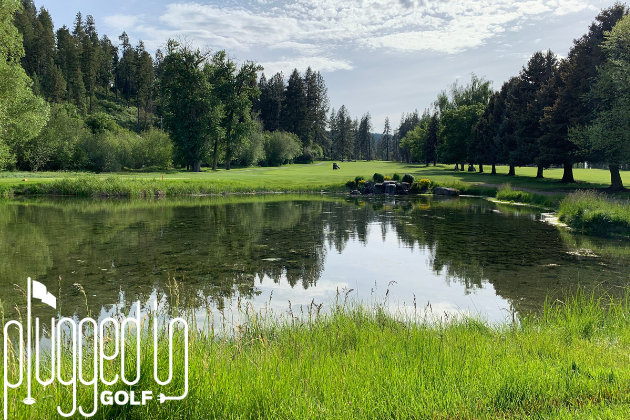 My only critique is the pacing of the golf.  While each hole is well designed, the front nine drags a bit.  The first par 3 isn’t until hole number 7, and without the “relief” of a shorter hole, the course felt long despite topping out at 6663 yards.  That being said, it’s a course that is very accepting of different skill and distance levels which is a big plus. 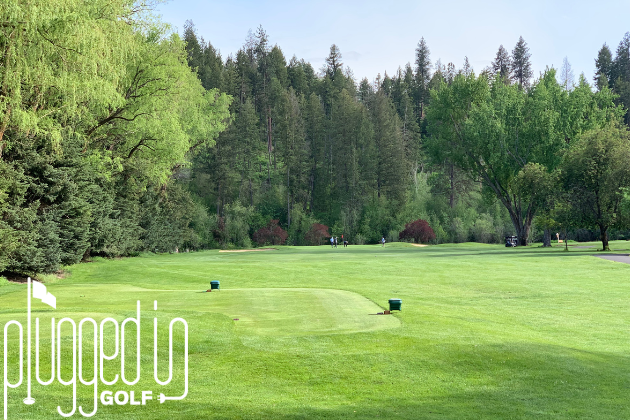 Like many courses in Northern Idaho and Spokane Washington area, the surroundings are distractingly beautiful.  While not the most challenging course, you’ll need to keep focused and make consistent and exacting shots to score well. 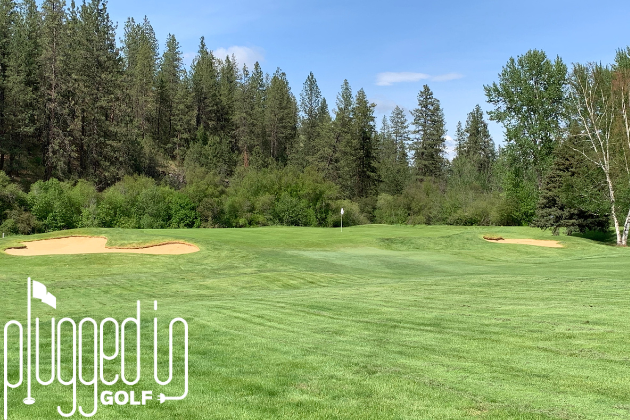 This hole sets up to be one of the most majestic views on the course.  Positioned over the road to enter the complex, the elevated tee shot leads down a hole that doglegs to the right.  The tee is lined with trees on either side that opens up to a vista. The hole also features tall mountainsides with tons of foliage.  Once that tee shot lands, it will take two skillful shots to secure a par on what’s one of the toughest holes on the course. 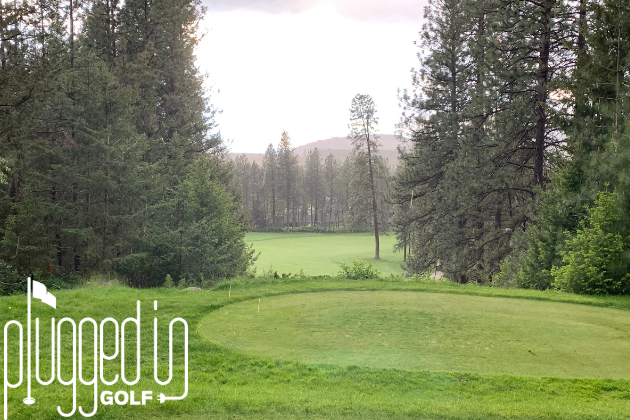 Much like the hole before it, #17 has a high vantage point and a scenic view.  While this is technically the easiest hole on the course, there is still a challenge to it, as both bunkers and water are present.  It also can be played in a multitude of ways, with 11 different tee boxes that see use. 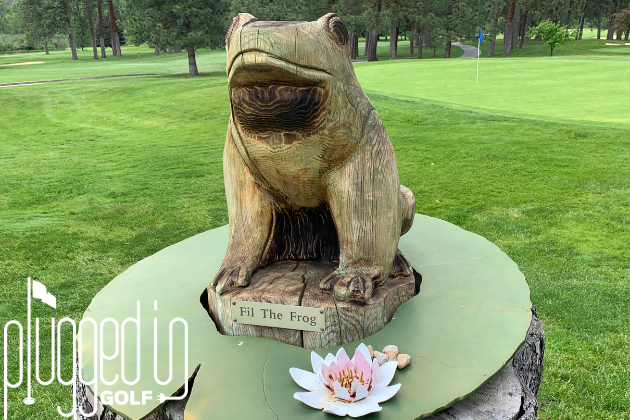 The logo of Kalispel is a frog.  It’s meant to symbolize many positives: community, balance, health, and good fortune.  It’s ironic because when I arrived at this course, I was taken with the scale and felt very much like a tadpole.  By the end though, I had learned the ropes, grown, and adapted to the course.  When I left, I felt like a frog yearning to come back to jump around the property again.  If you’re in the area, this should absolutely be a place to hop to.